The Fullerton House at 111 East Forest 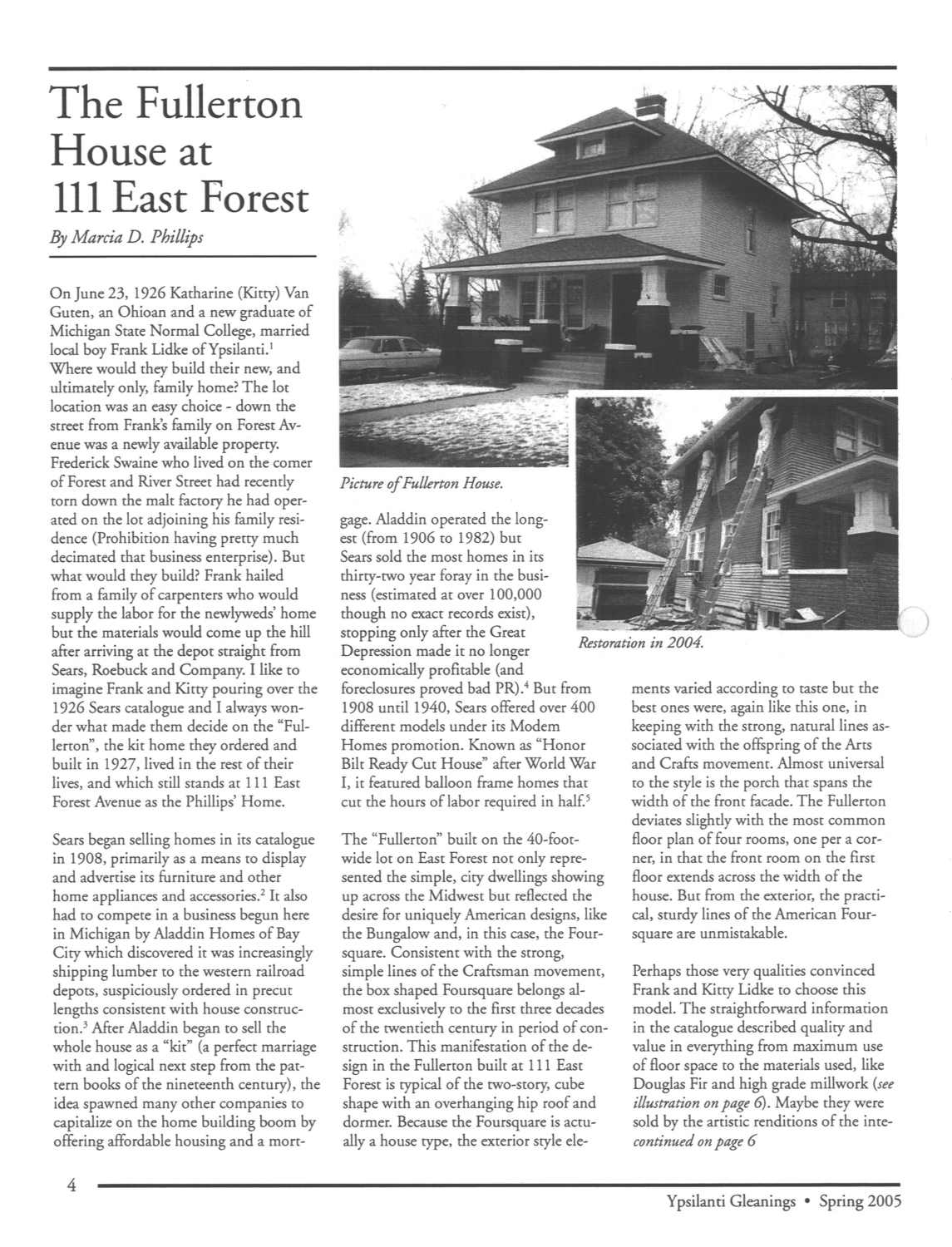 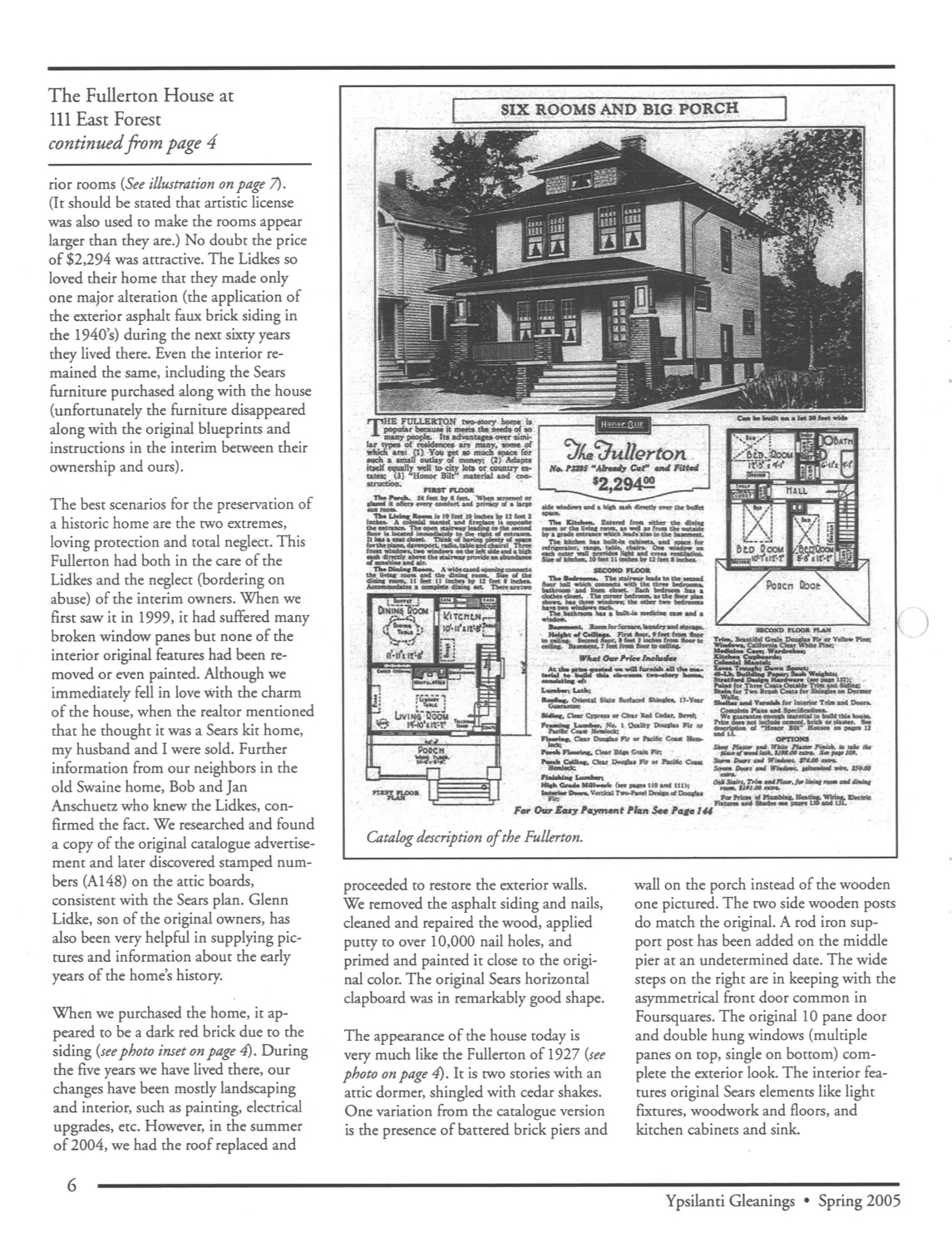 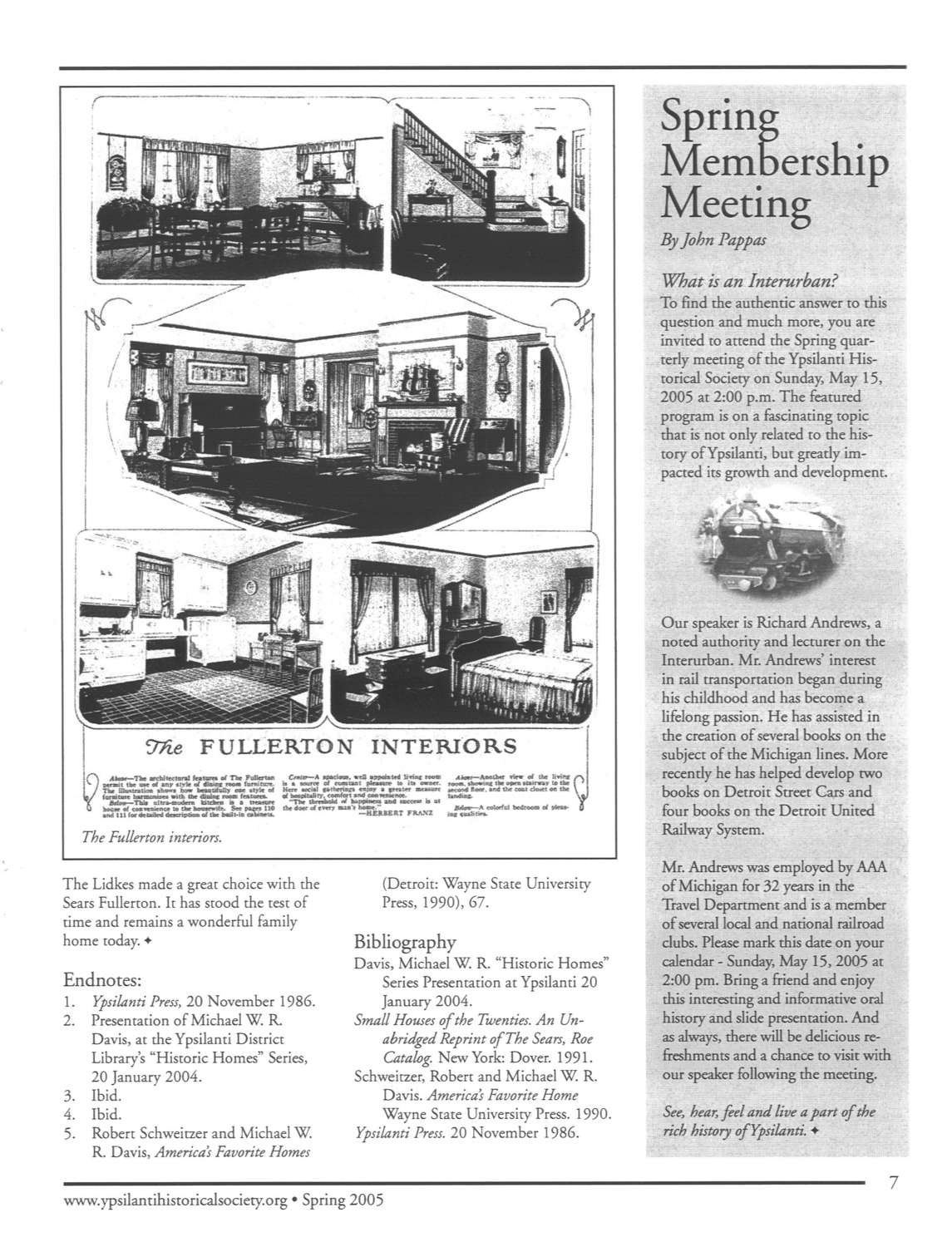 Where would they build their new, and ultimately only, family home? The lot location was an easy choice-down the street from Frank's family on Forest Avenue was a newly available property. Frederick Swaine who lived on the comer of Forest and River Street had recently torn down the malt factory he had operated on the lot adjoining his family residence (Prohibition having pretty much decimated that business enterprise). But what would they build? Frank hailed from a family of carpenters who would supply the labor for the newlyweds' home but the materials would come up the hill after arriving at the depot straight from Sears, Roebuck and Company. I like to imagine Frank and Kitty pouring over the 1926 Sears catalogue and I always wonder what made them decide on the “Fullerton”, the kit home they ordered and built in 1927, lived in the rest of their lives, and which still stands at 111 East Forest Avenue as the Phillips' Home.

Sears began selling homes in its catalogue in 1908, primarily as a means to display and advertise its furniture and other home appliances and accessories. (2)

It also had to compete in a business begun here in Michigan by Aladdin Homes of Bay City which discovered it was increasingly shipping lumber to the western railroad depots, suspiciously ordered in precut lengths consistent with house construction. (3)

After Aladdin began to sell the whole house as a “kit” (a perfect marriage with and logical next step from the pattern books of the nineteenth century), the idea spawned many other companies to capitalize on the home building boom by offering affordable housing and a mortgage. Aladdin operated the longest (from 1906 to 1982) but Sears sold the most homes in its thirty-two year foray in the business (estimated at over 100,000 though no exact records exist), stopping only after the Great Depression made it no longer economically profitable (and foreclosures proved bad PR) (4)

But from 1908 until 1940, Sears offered over 400 different models under its Modem Homes promotion. Known as “Honor Bilt Ready Cut House” after World War I, it featured balloon frame homes that cut the hours of labor required in half. (5)

The “Fullerton” built on the 40-foot-wide lot on East Forest not only represented the simple, city dwellings showing up across the Midwest but reflected the desire for uniquely American designs, like the Bungalow and, in this case, the Foursquare. Consistent with the strong, simple lines of the Craftsman movement, the box shaped Foursquare belongs almost exclusively to the first three decades of the twentieth century in period of construction. This manifestation of the design in the Fullerton built at 111 East Forest is typical of the two-story, cube shape with an overhanging hip roof and dormer. Because the Foursquare is actually a house type, the exterior style elements varied according to taste but the best ones were, again like this one, in keeping with the strong, natural lines associated with the offspring of the Arts and Crafts movement. Almost universal to the style is the porch that spans the width of the front facade. The Fullerton deviates slightly with the most common floor plan of four rooms, one per a corner, in that the front room on the first floor extends across the width of the house. But from the exterior, the practical, sturdy lines of the American Foursquare are unmistakable.

Perhaps those very qualities convinced Frank and Kitty Lidke to choose this model. The straightforward information in the catalogue described quality and value in everything from maximum use of floor space to the materials used, like Douglas Fir and high grade millwork (see illustration on page 6). Maybe they were sold by the artistic renditions of the interior rooms (See illustration on page 7). (It should be stated that artistic license was also used to make the rooms appear larger than they are.) No doubt the price of &dollar;2,294 was attractive. The Lidkes so loved their home that they made only one major alteration (the application of the exterior asphalt faux brick siding in the 1940's) during the next sixty years they lived there. Even the interior remained the same, including the Sears furniture purchased along with the house (unfortunately the furniture disappeared along with the original blueprints and instructions in the interim between their ownership and ours).

The best scenarios for the preservation of a historic home are the two extremes, loving protection and total neglect. This Fullerton had both in the care of the Lidkes and the neglect (bordering on abuse) of the interim owners. When we first saw it in 1999, it had suffered many broken window panes but none of the interior original features had been removed or even painted. Although we immediately fell in love with the charm of the house, when the realtor mentioned that he thought it was a Sears kit home, my husband and I were sold. Further information from our neighbors in the old Swaine home, Bob and Jan Anschuetz who knew the Lidkes, confirmed the fact. We researched and found a copy of the original catalogue advertisement and later discovered stamped numbers (A148) on the attic boards, consistent with the Sears plan. Glenn Lidke, son of the original owners, has also been very helpful in supplying pictures and information about the early years of the home's history.

When we purchased the home, it appeared to be a dark red brick due to the siding (see photo inset on page 4). During the five years we have lived there, our changes have been mostly landscaping and interior, such as painting, electrical upgrades, etc. However, in the summer of 2004, we had the roof replaced and proceeded to restore the exterior walls. We removed the asphalt siding and nails, cleaned and repaired the wood, applied putty to over 10,000 nail holes, and primed and painted it close to the original color. The original Sears horizontal clapboard was in remarkably good shape.

The appearance of the house today is very much like the Fullerton of 1927 (see photo on page 4). It is two stories with an attic dormer, shingled with cedar shakes. One variation from the catalogue version is the presence of battered brick piers and wall on the porch instead of the wooden one pictured. The two side wooden posts do match the original. A rod iron support post has been added on the middle pier at an undetermined date. The wide steps on the right are in keeping with the asymmetrical front door common in Foursquares. The original 10 pane door and double hung windows (multiple panes on top, single on bottom) complete the exterior look. The interior features original Sears elements like light fixtures, woodwork and floors, and kitchen cabinets and sink.

The Likes made a great choice with the Sears Fullerton. It has stood the test of time and remains a wonderful family home today.

Small Houses of the Twenties. An Unabridged Reprint of The Sears, Roe Catalog. New York: Dover. 1991.