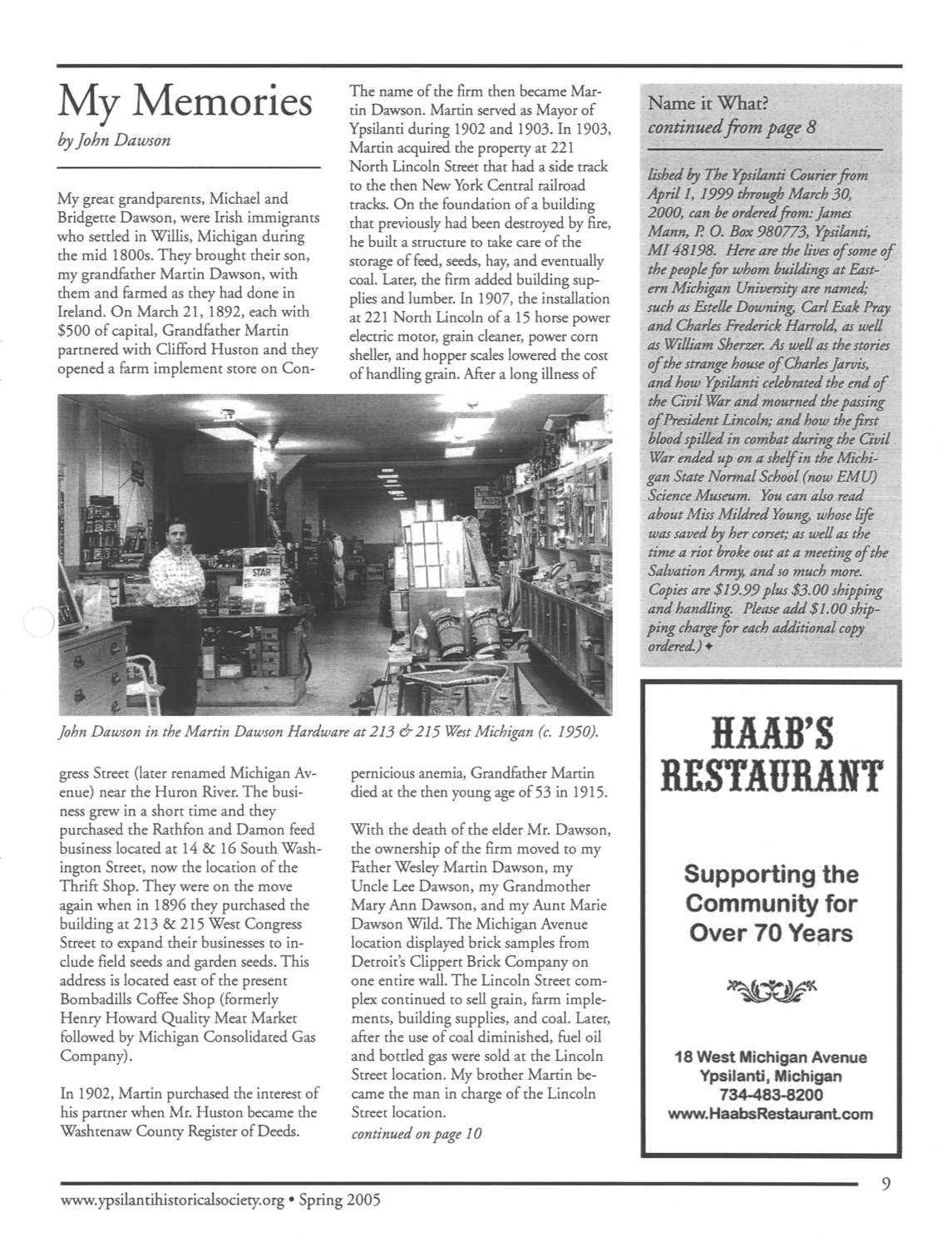 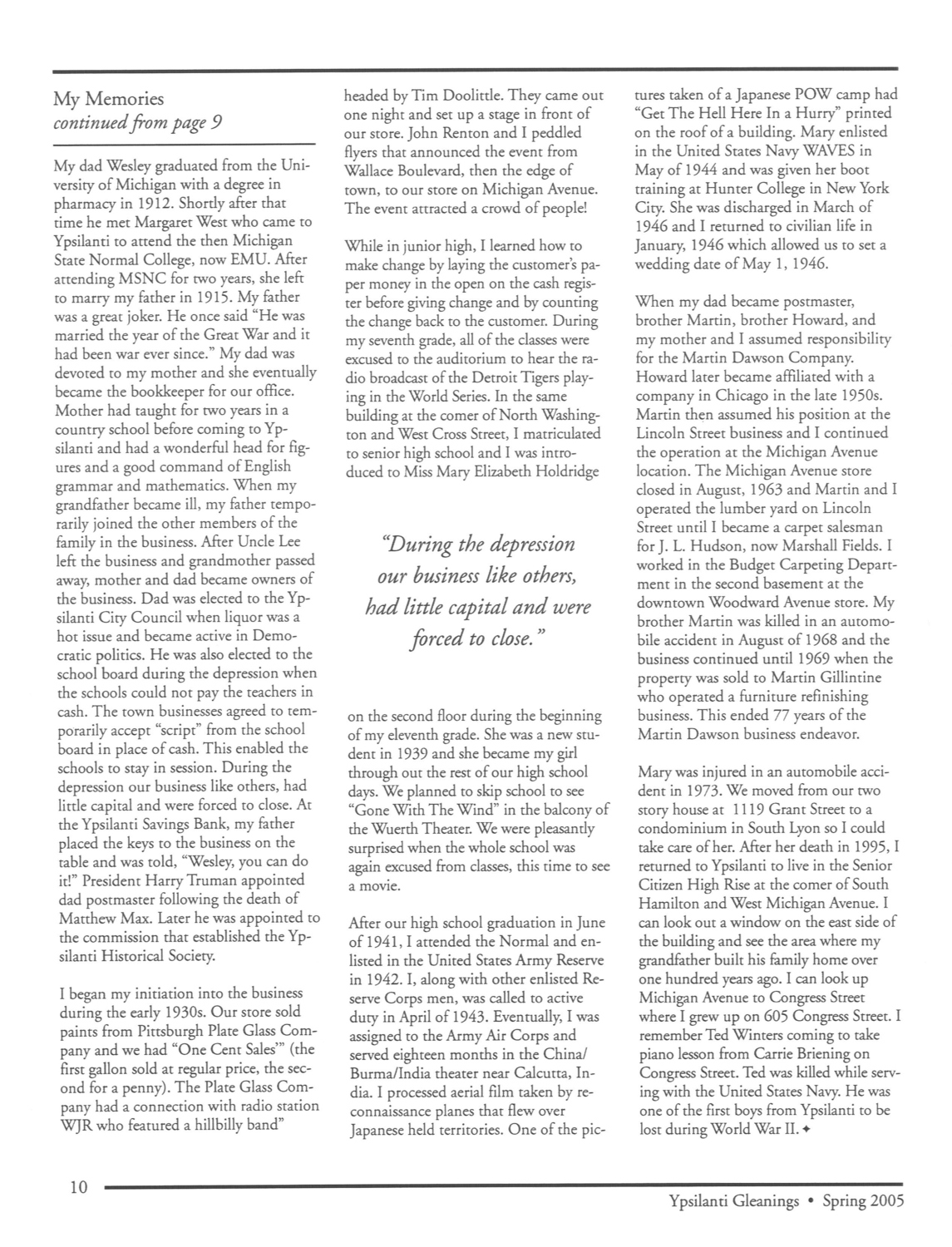 My great grandparents, Michael and Bridgette Dawson, were Irish immigrants who settled in Willis, Michigan during the mid 1800s. They brought their son, my grandfather Martin Dawson, with them and farmed as they had done in Ireland. On March 21, 1892, each with &dollar;500 of capital, Grandfather Martin partnered with Clifford Huston and they opened a farm implement store on Congress Street (later renamed Michigan Avenue) near the Huron River. The business grew in a short time and they purchased the Rathfon and Damon feed business located at 14 & 16 South Washington Street, now the location of the Thrift Shop. They were on the move again when in 1896 they purchased the building at 213 & 215 West Congress Street to expand their businesses to include field seeds and garden seeds. This address is located east of the present Bombadills Coffee Shop (formerly Henry Howard Quality Meat Market followed by Michigan Consolidated Gas Company).

In 1902, Martin purchased the interest of his partner when Mr. Huston became the Washtenaw County Register of Deeds. The name of the firm then became Martin Dawson. Martin served as Mayor of Ypsilanti during 1902 and 1903. In 1903, Martin acquired the property at 221 North Lincoln Street that had a side track to the then New York Central railroad tracks. On the foundation of a building that previously had been destroyed by fire, he built a structure to take care of the storage of feed, seeds, hay, and eventually coal. Later, the firm added building supplies and lumber. In 1907, the installation at 221 North Lincoln of a 15 horse power electric motor, grain cleaner, power corn sheller, and hopper scales lowered the cost of handling grain. After a long illness of pernicious anemia, Grandfather Martin died at the then young age of 53 in 1915.

With the death of the elder Mr. Dawson, the ownership of the firm moved to my Father Wesley Martin Dawson, my Uncle Lee Dawson, my Grandmother Mary Ann Dawson, and my Aunt Marie Dawson Wild. The Michigan Avenue location displayed brick samples from Detroit's Clippert Brick Company on one entire wall. The Lincoln Street complex continued to sell grain, farm implements, building supplies, and coal. Later, after the use of coal diminished, fuel oil and bottled gas were sold at the Lincoln Street location. My brother Martin became the man in charge of the Lincoln Street location.

My dad Wesley graduated from the University of Michigan with a degree in pharmacy in 1912. Shortly after that time he met Margaret West who came to Ypsilanti to attend the then Michigan State Normal College, now EMU. After attending MSNC for two years, she left to marry my father in 1915. My father was a great joker. He once said “He was married the year of the Great War and it had been war ever since.” My dad was devoted to my mother and she eventually became the bookkeeper for our office. Mother had taught for two years in a country school before coming to Ypsilanti and had a wonderful head for figures and a good command of English grammar and mathematics. When my grandfather became ill, my father temporarily joined the other members of the family in the business. After Uncle Lee left the business and grandmother passed away, mother and dad became owners of the business. Dad was elected to the Ypsilanti City Council when liquor was a hot issue and became active in Democratic politics. He was also elected to the school board during the depression when the schools could not pay the teachers in cash. The town businesses agreed to temporarily accept “script” from the school board in place of cash. This enabled the schools to stay in session. During the depression our business like others, had little capital and were forced to close. At the Ypsilanti Savings Bank, my father placed the keys to the business on the table and was told, “Wesley, you can do it!” President Harry Truman appointed dad postmaster following the death of Matthew Max. Later he was appointed to the commission that established the Ypsilanti Historical Society.

I began my initiation into the business during the early 1930s. Our store sold paints from Pittsburgh Plate Glass Company and we had “One Cent Sales'” (the first gallon sold at regular price, the second for a penny). The Plate Glass Company had a connection with radio station WJR who featured a hillbilly band” headed by Tim Doolittle. They came out one night and set up a stage in front of our store. John Renton and I peddled flyers that announced the event from Wallace Boulevard, then the edge of town, to our store on Michigan Avenue. The event attracted a crowd of people!

While in junior high, I learned how to make change by laying the customer's paper money in the open on the cash register before giving change and by counting the change back to the customer. During my seventh grade, all of the classes were excused to the auditorium to hear the radio broadcast of the Detroit Tigers playing in the World Series. In the same building at the comer of North Washington and West Cross Street, I matriculated to senior high school and I was introduced to Miss Mary Elizabeth Holdridge on the second floor during the beginning of my eleventh grade. She was a new student in 1939 and she became my girl through out the rest of our high school days. We planned to skip school to see “Gone With The Wind” in the balcony of the Wuerth Theater. We were pleasantly surprised when the whole school was again excused from classes, this time to see a movie.

“During the depression
our business like others,
had little capital and were
forced to close.”

After our high school graduation in June of 1941, I attended the Normal and enlisted in the United States Army Reserve in 1942. I, along with other enlisted Reserve Corps men, was called to active duty in April of 1943. Eventually, I was assigned to the Army Air Corps and served eighteen months in the China/ Burma/India theater near Calcutta, India. I processed aerial film taken by reconnaissance planes that flew over Japanese held territories. One of the pictures taken of a Japanese POW camp had “Get The Hell Here In a Hurry” printed on the roof of a building. Mary enlisted in the United States Navy WAVES in May of 1944 and was given her boot training at Hunter College in New York City. She was discharged in March of 1946 and I returned to civilian life in January, 1946 which allowed us to set a wedding date of May 1, 1946.

When my dad became postmaster, brother Martin, brother Howard, and my mother and I assumed responsibility for the Martin Dawson Company. Howard later became affiliated with a company in Chicago in the late 1950s. Martin then assumed his position at the Lincoln Street business and I continued the operation at the Michigan Avenue location. The Michigan Avenue store closed in August, 1963 and Martin and I operated the lumber yard on Lincoln Street until I became a carpet salesman for J. L. Hudson, now Marshall Fields. I worked in the Budget Carpeting Department in the second basement at the downtown Woodward Avenue store. My brother Martin was killed in an automobile accident in August of 1968 and the business continued until 1969 when the property was sold to Martin Gillintine who operated a furniture refinishing business. This ended 77 years of the Martin Dawson business endeavor.

Mary was injured in an automobile accident in 1973. We moved from our two story house at 1119 Grant Street to a condominium in South Lyon so I could take care of her. After her death in 1995, I returned to Ypsilanti to live in the Senior Citizen High Rise at the comer of South Hamilton and West Michigan Avenue. I can look out a window on the east side of the building and see the area where my grandfather built his family home over one hundred years ago. I can look up Michigan Avenue to Congress Street where I grew up on 605 Congress Street. I remember Ted Winters coming to take piano lesson from Carrie Briening on Congress Street. Ted was killed while serving with the United States Navy. He was one of the first boys from Ypsilanti to be lost during World War II.