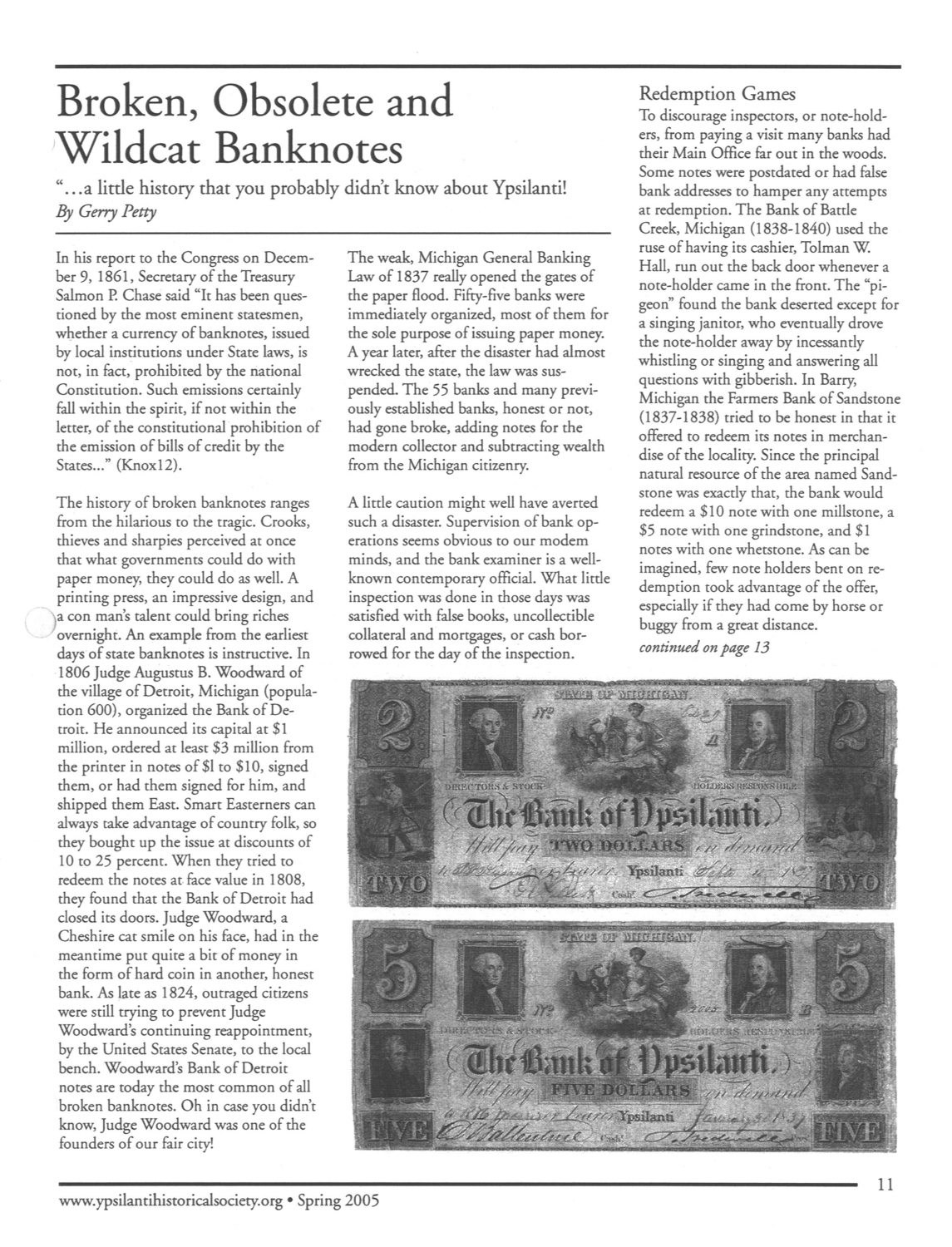 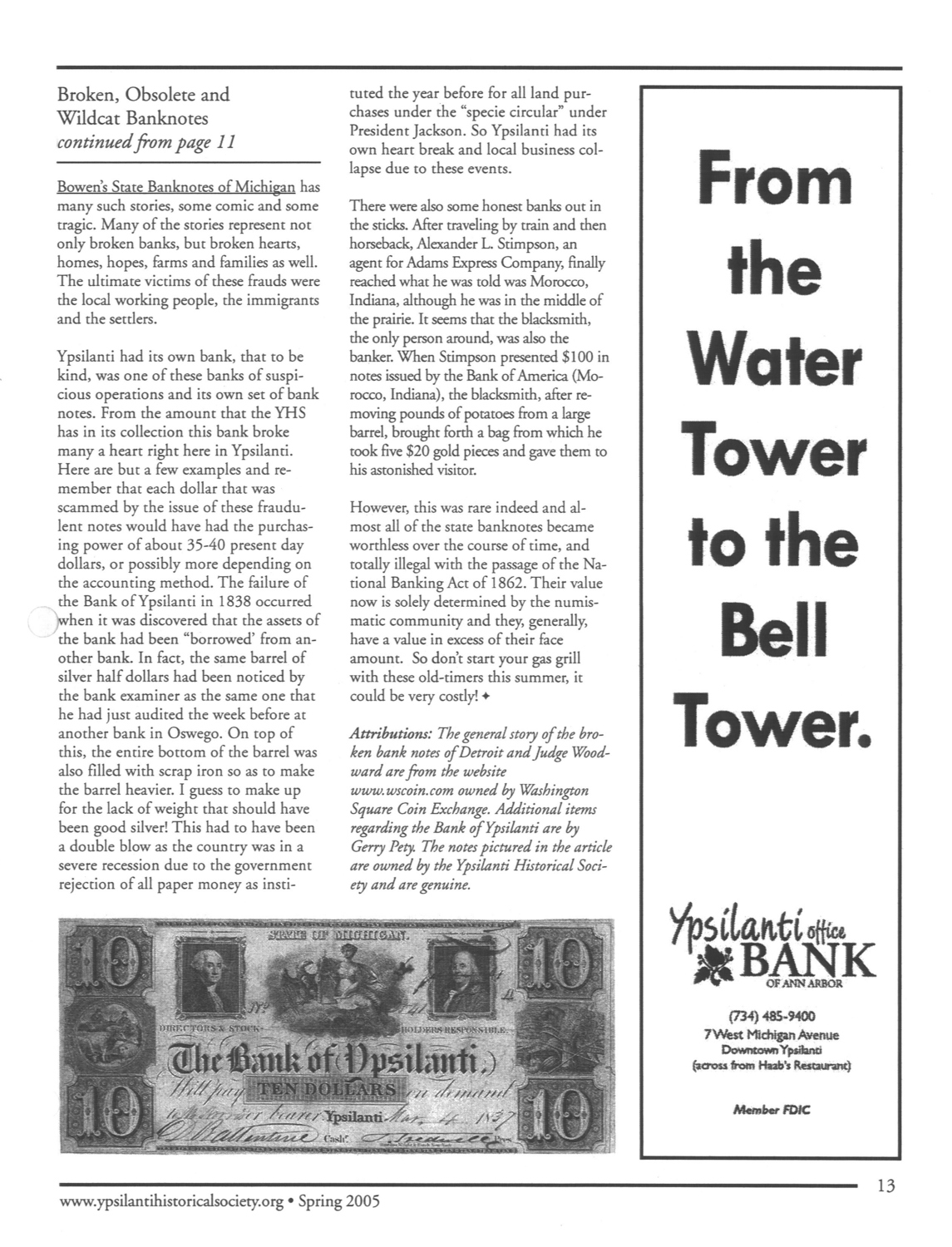 ...a little history that you probably didn't know about Ypsilanti!

In his report to the Congress on December 9, 1861, Secretary of the Treasury Salmon P. Chase said “It has been questioned by the most eminent statesmen, whether a currency of banknotes, issued by local institutions under State laws, is not, in fact, prohibited by the national Constitution. Such emissions certainly fall within the spirit, if not within the letter, of the constitutional prohibition of the emission of bills of credit by the States…” (Knox 12).

The history of broken banknotes ranges from the hilarious to the tragic. Crooks, thieves and sharpies perceived at once that what governments could do with paper money, they could do as well. A printing press, an impressive design, and a con man's talent could bring riches overnight. An example from the earliest days of state banknotes is instructive. In 1806 Judge Augustus B. Woodward of the village of Detroit, Michigan (population 600), organized the Bank of Detroit. He announced its capital at &dollar;1 million, ordered at least &dollar;3 million from the printer in notes of &dollar;1 to &dollar;10, signed them, or had them signed for him, and shipped them East. Smart Easterners can always take advantage of country folk, so they bought up the issue at discounts of 10 to 25 percent. When they tried to redeem the notes at face value in 1808, they found that the Bank of Detroit had closed its doors. Judge Woodward, a Cheshire cat smile on his face, had in the meantime put quite a bit of money in the form of hard coin in another, honest bank. As late as 1824, outraged citizens were still trying to prevent Judge Woodward's continuing reappointment, by the United States Senate, to the local bench. Woodward's Bank of Detroit notes are today the most common of all broken banknotes. Oh in case you didn't know, Judge Woodward was one of the founders of our fair city!

The weak, Michigan General Banking Law of 1837 really opened the gates of the paper flood. Fifty-five banks were immediately organized, most of them for the sole purpose of issuing paper money. A year later, after the disaster had almost wrecked the state, the law was suspended. The 55 banks and many previously established banks, honest or not, had gone broke, adding notes for the modern collector and subtracting wealth from the Michigan citizenry.

A little caution might well have averted such a disaster. Supervision of bank operations seems obvious to our modem minds, and the bank examiner is a well-known contemporary official. What little inspection was done in those days was satisfied with false books, uncollectible collateral and mortgages, or cash borrowed for the day of the inspection.

To discourage inspectors, or note-holders, from paying a visit many banks had their Main Office far out in the woods. Some notes were postdated or had false bank addresses to hamper any attempts at redemption. The Bank of Battle Creek, Michigan (1838-1840) used the ruse of having its cashier, Tolman W. Hall, run out the back door whenever a note-holder came in the front. The “pigeon” found the bank deserted except for a singing janitor, who eventually drove the note-holder away by incessantly whistling or singing and answering all questions with gibberish. In Barry, Michigan the Farmers Bank of Sandstone (1837-1838) tried to be honest in that it offered to redeem its notes in merchandise of the locality. Since the principal natural resource of the area named Sandstone was exactly that, the bank would redeem a $10 note with one millstone, a $5 note with one grindstone, and $1 notes with one whetstone. As can be imagined, few note holders bent on redemption took advantage of the offer, especially if they had come by horse or buggy from a great distance.

Bowen's State Banknotes of Michigan has many such stories, some comic and some tragic. Many of the stories represent not only broken banks, but broken hearts, homes, hopes, farms and families as well. The ultimate victims of these frauds were the local working people, the immigrants and the settlers.

Ypsilanti had its own bank, that to be kind, was one of these banks of suspicious operations and its own set of bank notes. From the amount that the YHS has in its collection this bank broke many a heart right here in Ypsilanti. Here are but a few examples and remember that each dollar that was scammed by the issue of these fraudulent notes would have had the purchasing power of about 35-40 present day dollars, or possibly more depending on the accounting method. The failure of the Bank of Ypsilanti in 1838 occurred when it was discovered that the assets of the bank had been “borrowed” from another bank. In fact, the same barrel of silver half dollars had been noticed by the bank examiner as the same one that he had just audited the week before at another bank in Oswego. On top of this, the entire bottom of the barrel was also filled with scrap iron so as to make the barrel heavier. I guess to make up for the lack of weight that should have been good silver! This had to have been a double blow as the country was in a severe recession due to the government rejection of all paper money as instituted the year before for all land purchases under the “specie circular” under President Jackson. So Ypsilanti had its own heart break and local business collapse due to these events.

There were also some honest banks out in the sticks. After traveling by train and then horseback, Alexander L. Stimpson, an agent for Adams Express Company, finally reached what he was told was Morocco, Indiana, although he was in the middle of the prairie. It seems that the blacksmith, the only person around, was also the banker. When Stimpson presented &dollar;100 in notes issued by the Bank of America (Morocco, Indiana), the blacksmith, after removing pounds of potatoes from a large barrel, brought forth a bag from which he took five $20 gold pieces and gave them to his astonished visitor.

However, this was rare indeed and almost all of the state banknotes became worthless over the course of time, and totally illegal with the passage of the National Banking Act of 1862. Their value now is solely determined by the numismatic community and they, generally, have a value in excess of their face amount. So don't start your gas grill with these old-timers this summer, it could be very costly!

Attributions: The general story of the broken bank notes of Detroit and Judge Woodward are from the website www.wscoin.com owned by Washington Square Coin Exchange. Additional items regarding the Bank of Ypsilanti are by Gerry Pety. The notes pictured in the article are owned by the Ypsilanti Historical Society and are genuine.