Ypsilanti, It Just Had To Happen! 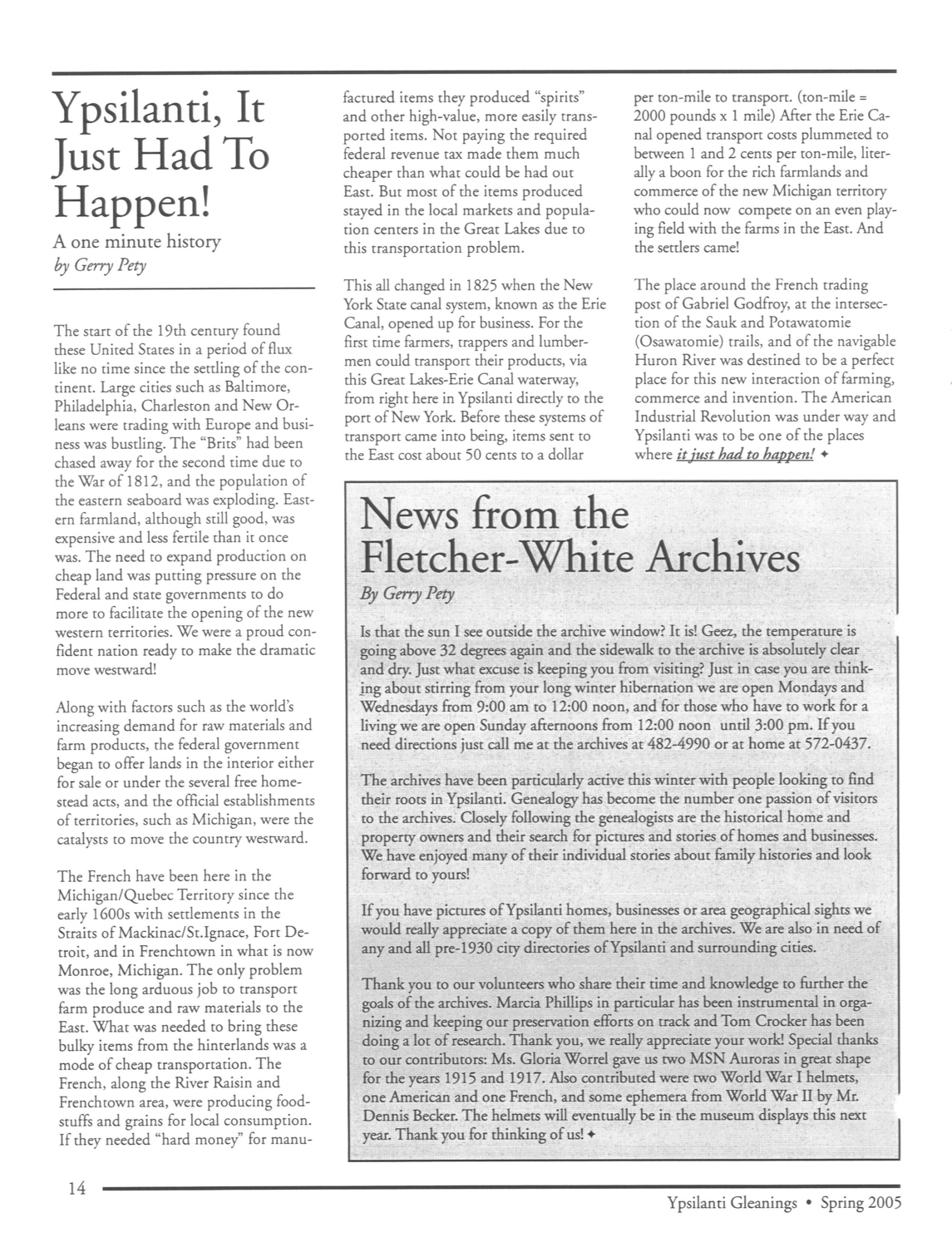 A one minute history

The start of the 19th century found these United States in a period of flux like no time since the settling of the continent. Large cities such as Baltimore, Philadelphia, Charleston and New Orleans were trading with Europe and business was bustling. The “Brits” had been chased away for the second time due to the War of 1812, and the population of the eastern seaboard was exploding. Eastern farmland, although still good, was expensive and less fertile than it once was. The need to expand production on cheap land was putting pressure on the Federal and state governments to do more to facilitate the opening of the new western territories. We were a proud confident nation ready to make the dramatic move westward!

Along with factors such as the world's increasing demand for raw materials and farm products, the federal government began to offer lands in the interior either for sale or under the several free homestead acts, and the official establishments of territories, such as Michigan, were the catalysts to move the country westward.

The French have been here in the Michigan/Quebec Territory since the early 1600s with settlements in the Straits of Mackinac/St.Ignace, Fort Detroit, and in Frenchtown in what is now Monroe, Michigan. The only problem was the long arduous job to transport farm produce and raw materials to the East. What was needed to bring these bulky items from the hinterlands was a mode of cheap transportation. The French, along the River Raisin and Frenchtown area, were producing foodstuffs and grains for local consumption. If they needed “hard money” for manufactured items they produced “spirits” and other high-value, more easily transported items. Not paying the required federal revenue tax made them much cheaper than what could be had out East. But most of the items produced stayed in the local markets and population centers in the Great Lakes due to this transportation problem.

This all changed in 1825 when the New York State canal system, known as the Erie Canal, opened up for business. For the first time farmers, trappers and lumbermen could transport their products, via this Great Lakes-Erie Canal waterway, from right here in Ypsilanti directly to the port of New York. Before these systems of transport came into being, items sent to the East cost about 50 cents to a dollar per ton-mile to transport. (ton-mile &equals; 2000 pounds × 1 mile) After the Erie Canal opened transport costs plummeted to between 1 and 2 cents per ton-mile, literally a boon for the rich farmlands and commerce of the new Michigan territory who could now compete on an even playing field with the farms in the East. And the settlers came!

The place around the French trading post of Gabriel Godfroy, at the intersection of the Sauk and Potawatomie (Osawatomie) trails, and of the navigable Huron River was destined to be a perfect place for this new interaction of farming, commerce and invention. The American Industrial Revolution was under way and Ypsilanti was to be one of the places where
it just had to happen!