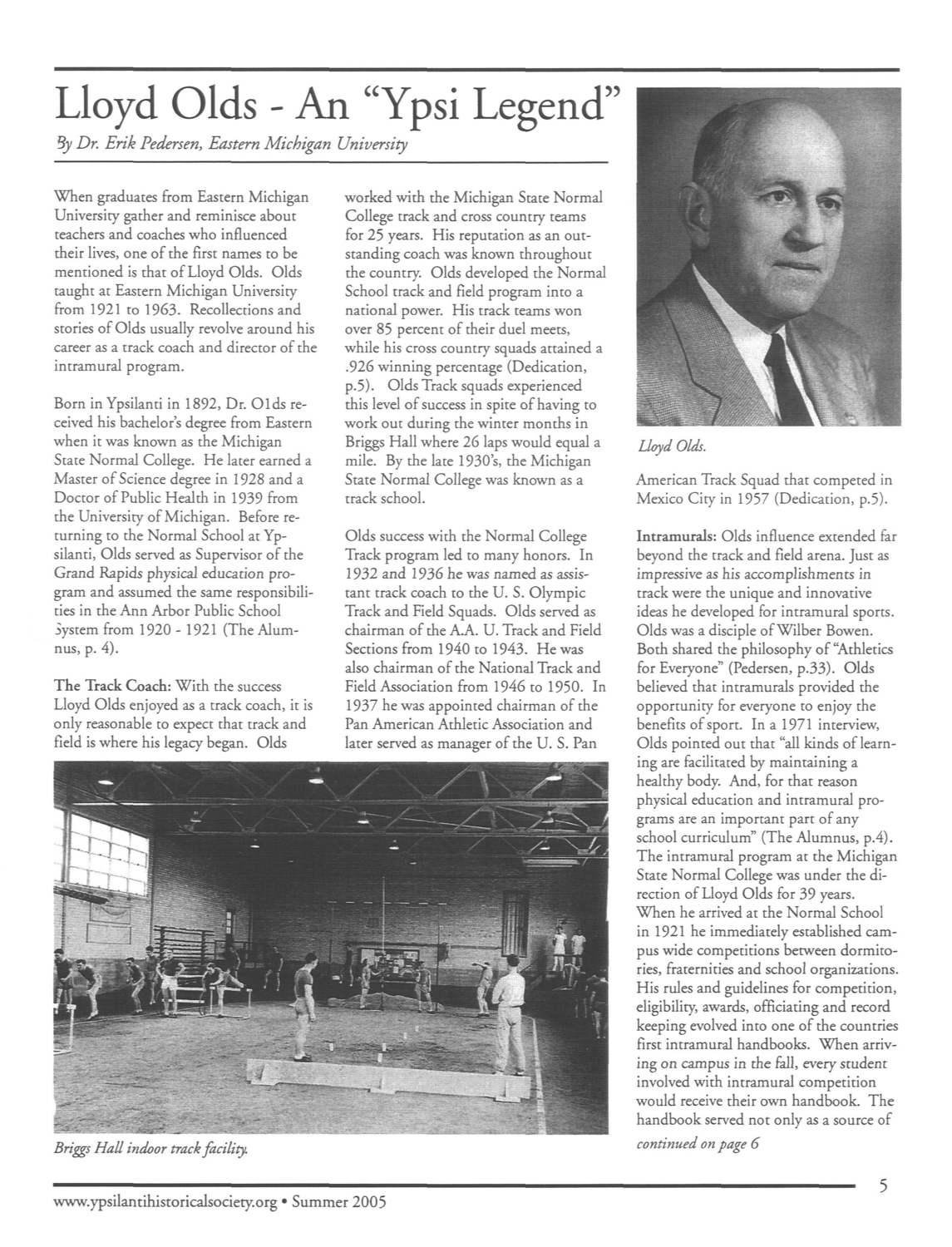 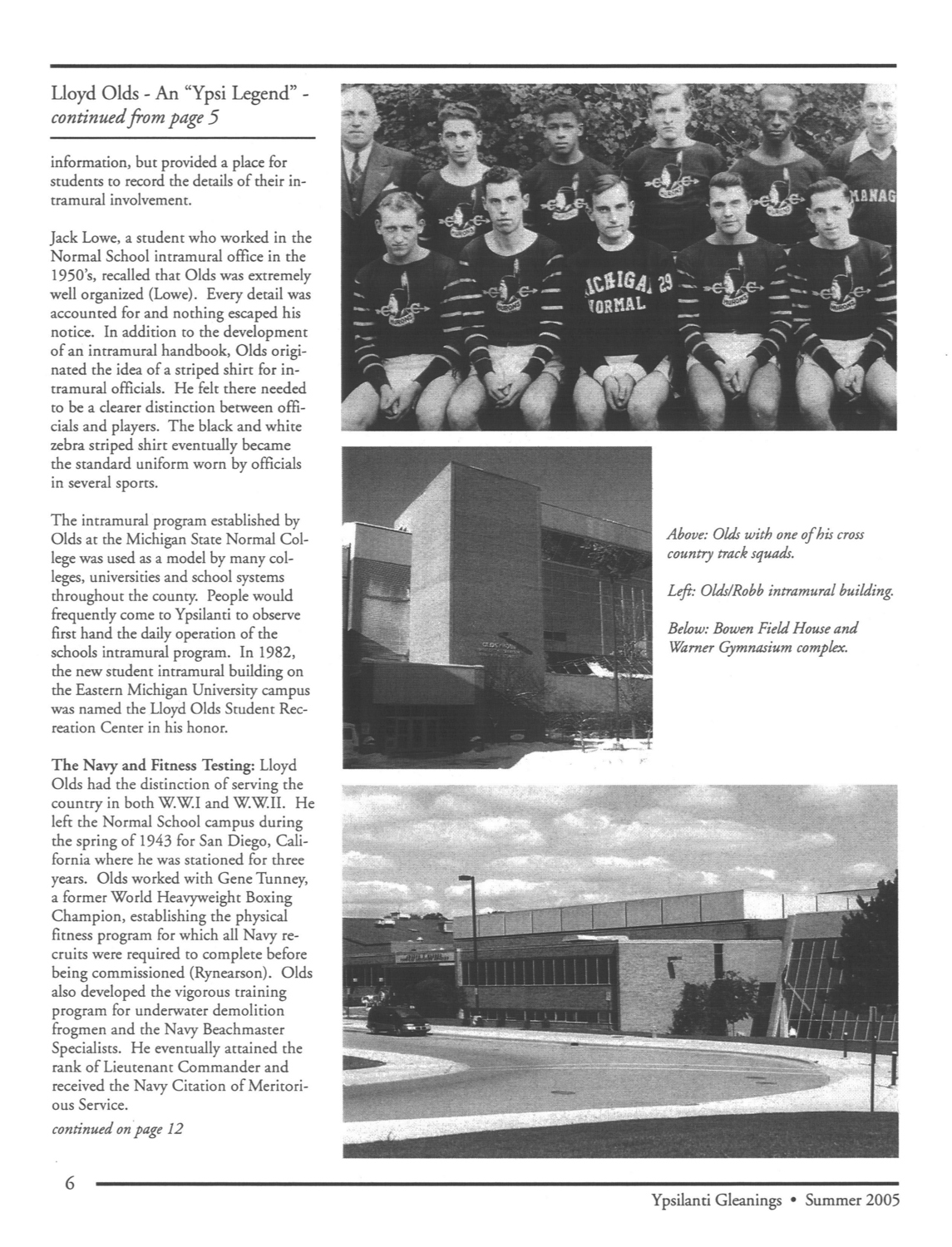 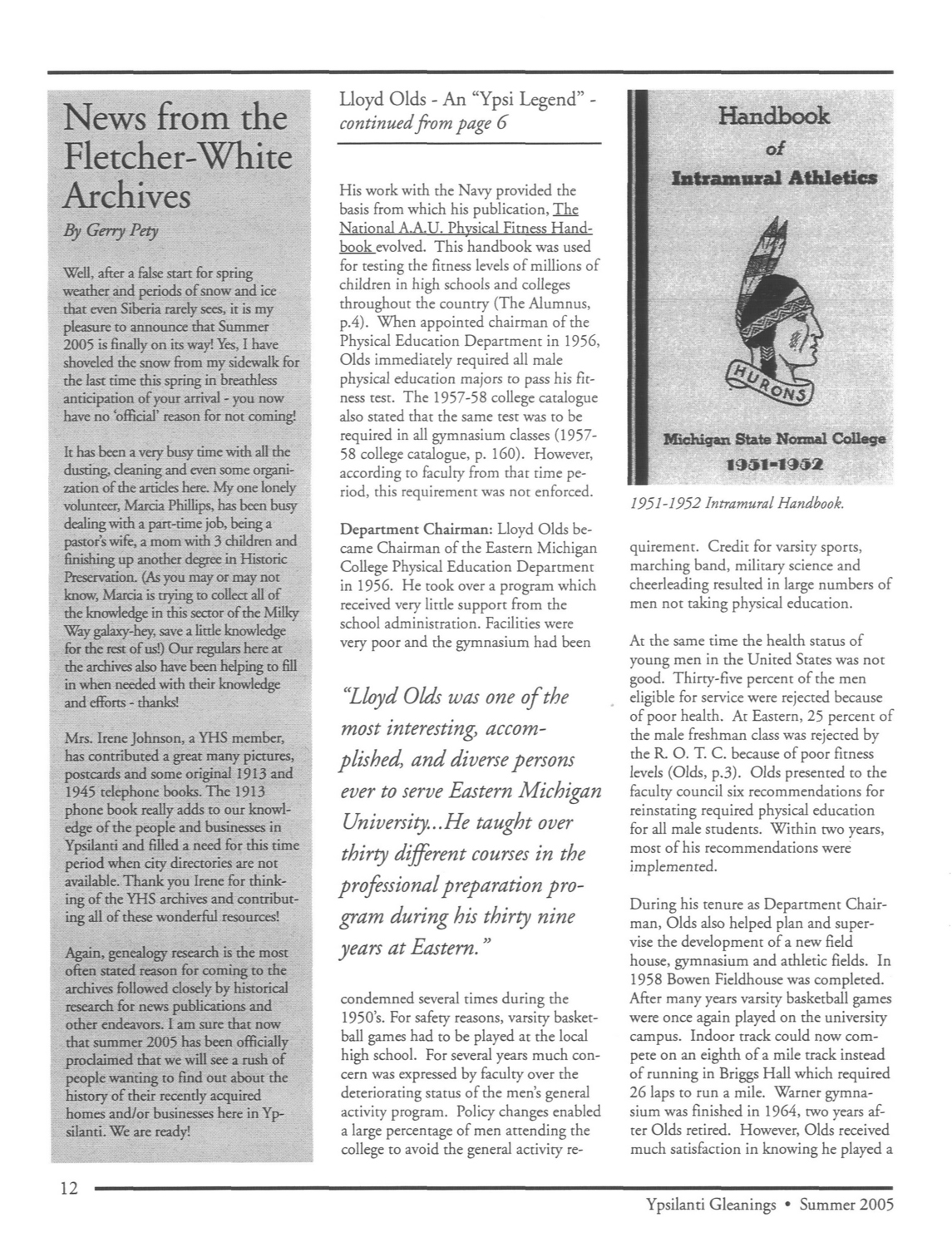 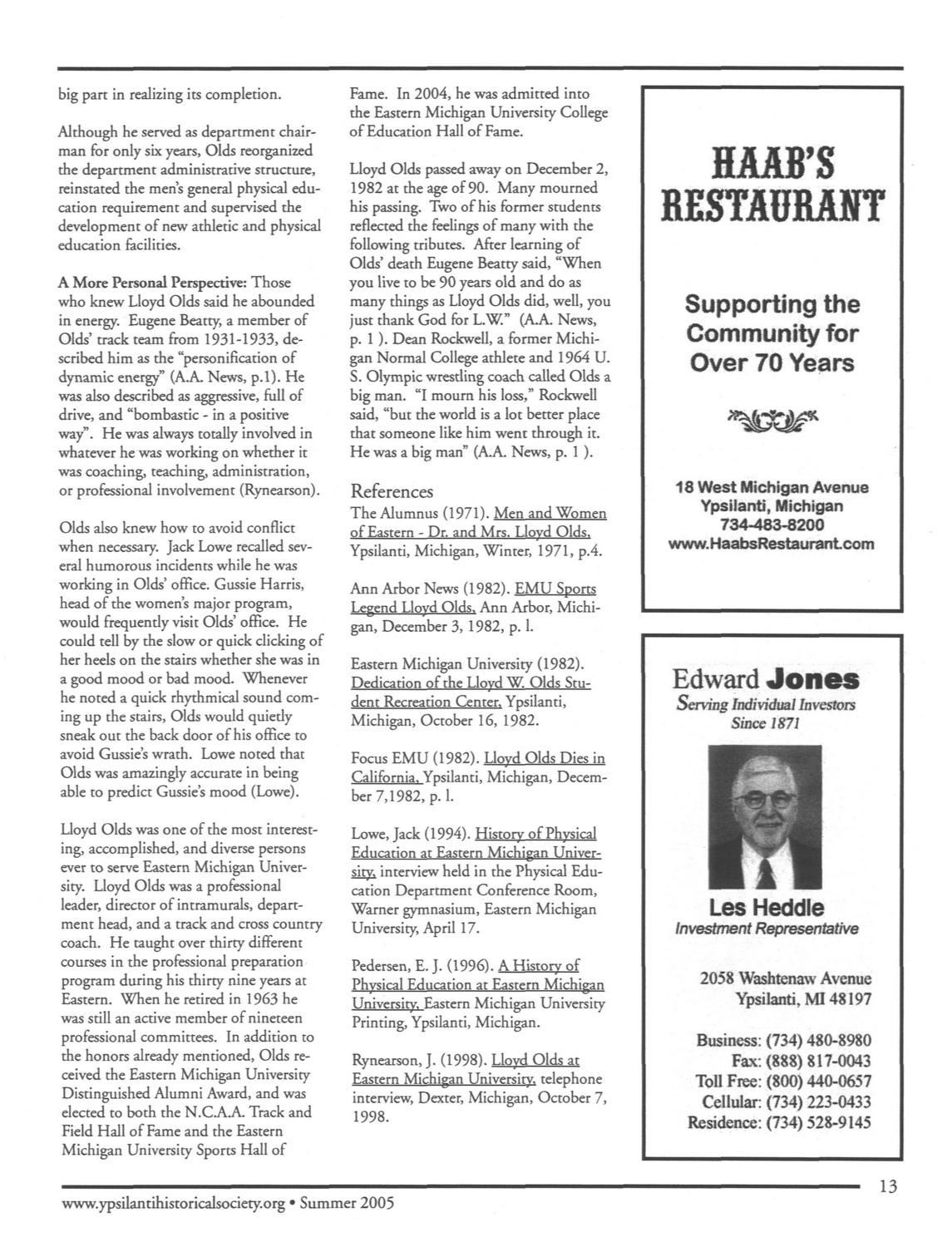 When graduates from Eastern Michigan University gather and reminisce about teachers and coaches who influenced their lives, one of the first names to be mentioned is that of Lloyd Olds. Olds taught at Eastern Michigan University from 1921 to 1963. Recollections and stories of Olds usually revolve around his career as a track coach and director of the intramural program.

Born in Ypsilanti in 1892, Dr. Olds received his bachelor's degree from Eastern when it was known as the Michigan State Normal College. He later earned a Master of Science degree in 1928 and a Doctor of Public Health in 1939 from the University of Michigan. Before returning to the Normal School at Ypsilanti, Olds served as Supervisor of the Grand Rapids physical education program and assumed the same responsibilities in the Ann Arbor Public School System from 1920–1921 (The Alumnus, p. 4).

The Track Coach: With the success Lloyd Olds enjoyed as a track coach, it is only reasonable to expect that track and field is where his legacy began. Olds worked with the Michigan State Normal College track and cross country teams for 25 years. His reputation as an outstanding coach was known throughout the country. Olds developed the Normal School track and field program into a national power. His track teams won over 85 percent of their duel meets, while his cross country squads attained a 926 winning percentage (Dedication, p.5). Olds Track squads experienced this level of success in spite of having to work out during the winter months in Briggs Hall where 26 laps would equal a mile. By the late 1930's, the Michigan State Normal College was known as a track school.

Intramurals: Olds influence extended far beyond the track and field arena. Just as impressive as his accomplishments in track were the unique and innovative ideas he developed for intramural sports. Olds was a disciple of Wilber Bowen. Both shared the philosophy of “Athletics for Everyone” (Pedersen, p.33). Olds believed that intramurals provided the opportunity for everyone to enjoy the benefits of sport. In a 1971 interview, Olds pointed out that “all kinds of learning are facilitated by maintaining a healthy body. And, for that reason physical education and intramural programs are an important part of any school curriculum”” (The Alumnus, p.4). The intramural program at the Michigan State Normal College was under the direction of Lloyd Olds for 39 years. When he arrived at the Normal School in 1921 he immediately established campus wide competitions between dormitories, fraternities and school organizations. His rules and guidelines for competition, eligibility, awards, officiating and record keeping evolved into one of the countries first intramural handbooks. When arriving on campus in the fall, every student involved with intramural competition would receive their own handbook. The handbook served not only as a source of information, but provided a place for students to record the details of their intramural involvement.

Jack Lowe, a student who worked in the Normal School intramural office in the 1950's, recalled that Olds was extremely well organized (Lowe). Every detail was accounted for and nothing escaped his notice. In addition to the development of an intramural handbook, Olds originated the idea of a striped shirt for intramural officials. He felt there needed to be a clearer distinction between officials and players. The black and white zebra striped shirt eventually became the standard uniform worn by officials in several sports.

The intramural program established by Olds at the Michigan State Normal College was used as a model by many colleges, universities and school systems throughout the county. People would frequently come to Ypsilanti to observe first hand the daily operation of the schools intramural program. In 1982, the new student intramural building on the Eastern Michigan University campus was named the Lloyd Olds Student Recreation Center in his honor.

The Navy and Fitness Testing: Lloyd Olds had the distinction of serving the country in both W.W.I and W.W.II. He left the Normal School campus during the spring of 1943 for San Diego, California where he was stationed for three years. Olds worked with Gene Tunney, a former World Heavyweight Boxing Champion, establishing the physical fitness program for which all Navy recruits were required to complete before being commissioned (Rynearson). Olds also developed the vigorous training program for underwater demolition frogmen and the Navy Beachmaster Specialists. He eventually attained the rank of Lieutenant Commander and received the Navy Citation of Meritorious Service.

His work with the Navy provided the basis from which his publication, The National A.A.U. Physical Fitness Handbook evolved. This handbook was used for testing the fitness levels of millions of children in high schools and colleges throughout the country (The Alumnus, p.4). When appointed chairman of the Physical Education Department in 1956, Olds immediately required all male physical education majors to pass his fitness test. The 1957–58 college catalogue also stated that the same test was to be required in all gymnasium classes (1957–58 college catalogue, p. 160). However, according to faculty from that time period, this requirement was not enforced.

Department Chairman: Lloyd Olds became Chairman of the Eastern Michigan College Physical Education Department in 1956. He took over a program which received very little support from the school administration. Facilities were very poor and the gymnasium had been condemned several times during the 1950's. For safety reasons, varsity basketball games had to be played at the local high school. For several years much concern was expressed by faculty over the deteriorating status of the men's general activity program. Policy changes enabled a large percentage of men attending the college to avoid the general activity requirement. Credit for varsity sports, marching band, military science and cheerleading resulted in large numbers of men not taking physical education.

“Lloyd Olds was one of the
most interesting, accomplished,
and diverse persons
ever to serve Eastern Michigan
University…He taught over
thirty different courses in the
professional preparation program
during his thirty nine
years at Eastern.”

At the same time the health status of young men in the United States was not good. Thirty-five percent of the men eligible for service were rejected because of poor health. At Eastern, 25 percent of the male freshman class was rejected by the R. O. T. C. because of poor fitness levels (Olds, p.3). Olds presented to the faculty council six recommendations for reinstating required physical education for all male students. Within two years, most of his recommendations were implemented.

During his tenure as Department Chairman, Olds also helped plan and supervise the development of a new field house, gymnasium and athletic fields. In 1958 Bowen Fieldhouse was completed. After many years varsity basketball games were once again played on the university campus. Indoor track could now compete on an eighth of a mile track instead of running in Briggs Hall which required 26 laps to run a mile. Warner gymnasium was finished in 1964, two years after Olds retired. However, Olds received much satisfaction in knowing he played a big part in realizing its completion.

A More Personal Perspective: Those who knew Lloyd Olds said he abounded in energy. Eugene Beatty, a member of Olds' track team from 1931–1933, described him as the “personification of dynamic energy” (A.A. News, p. 1). He was also described as aggressive, full of drive, and “bombastic-in a positive way””. He was always totally involved in whatever he was working on whether it was coaching, teaching, administration, or professional involvement (Rynearson).

Olds also knew how to avoid conflict when necessary. Jack Lowe recalled several humorous incidents while he was working in Olds' office. Gussie Harris, head of the women's major program, would frequently visit Olds' office. He could tell by the slow or quick clicking of her heels on the stairs whether she was in a good mood or bad mood. Whenever he noted a quick rhythmical sound coming up the stairs, Olds would quietly sneak out the back door of his office to avoid Gussie's wrath. Lowe noted that Olds was amazingly accurate in being able to predict Gussie's mood (Lowe).

Lloyd Olds passed away on December 2, 1982 at the age of 90. Many mourned his passing. Two of his former students reflected the feelings of many with the following tributes. After learning of Olds' death Eugene Beatty said, “When you live to be 90 years old and do as many things as Lloyd Olds did, well, you just thank God for L.W.” (A.A. News, p. 1). Dean Rockwell, a former Michigan Normal College athlete and 1964 U. S. Olympic wrestling coach called Olds a big man. “I mourn his loss,” Rockwell said, “but the world is a lot better place that someone like him went through it. He was a big man” (A.A. News, p. 1).