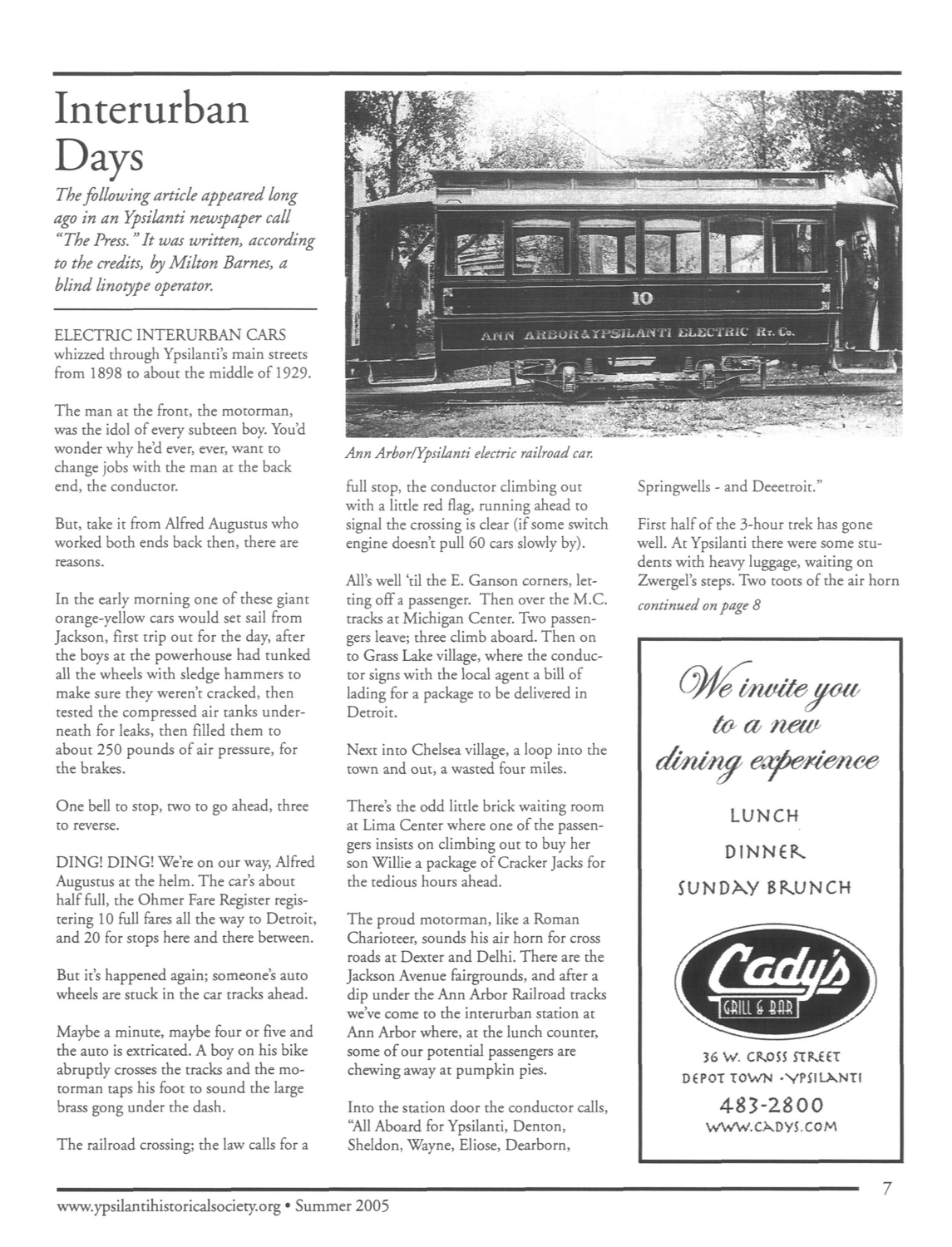 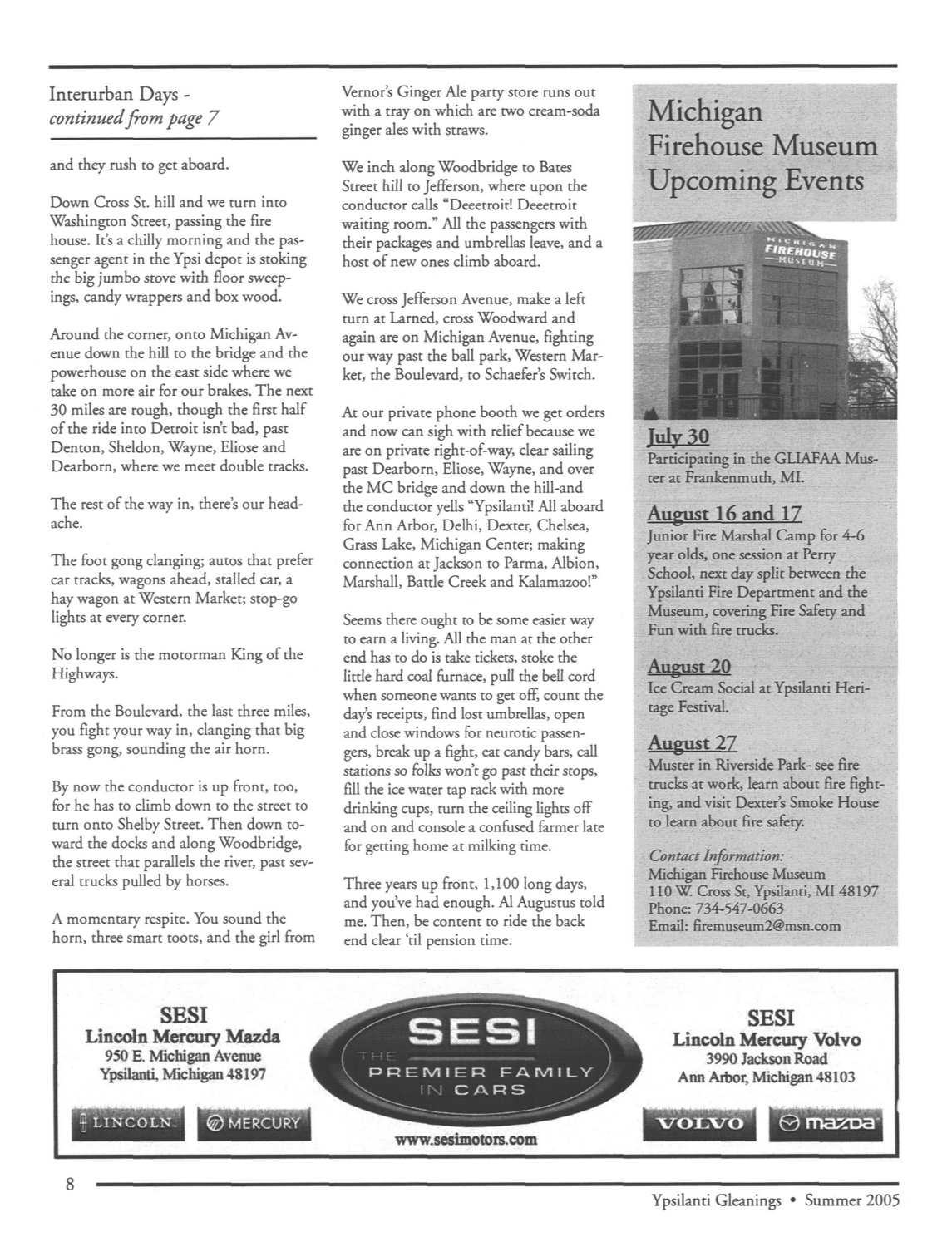 The following article appeared long ago in an Ypsilanti newspaper call “The Press.” It was written, according to the credits, by Milton Barnes, a blind linotype operator.

ELECTRIC INTERURBAN CARS whizzed through Ypsilanti's main streets from 1898 to about the middle of 1929.

The man at the front, the motorman, was the idol of every subteen boy. You'd wonder why he'd ever, ever, want to change jobs with the man at the back end, the conductor.

But, take it from Alfred Augustus who worked both ends back then, there are reasons.

In the early morning one of these giant orange-yellow cars would set sail from Jackson, first trip out for the day, after the boys at the powerhouse had tunked all the wheels with sledge hammers to make sure they weren't cracked, then tested the compressed air tanks underneath for leaks, then filled them to about 250 pounds of air pressure, for the brakes.

One bell to stop, two to go ahead, three to reverse.

DING! DING! We're on our way, Alfred Augustus at the helm. The car's about half full, the Ohmer Fare Register registering 10 full fares all the way to Detroit, and 20 for stops here and there between.

But it's happened again; someone's auto wheels are stuck in the car tracks ahead.

Maybe a minute, maybe four or five and the auto is extricated. A boy on his bike abruptly crosses the tracks and the motorman taps his foot to sound the large brass gong under the dash.

The railroad crossing; the law calls for a full stop, the conductor climbing out with a little red flag, running ahead to signal the crossing is clear (if some switch engine doesn't pull 60 cars slowly by).

All's well ‘til the E. Ganson corners, letting off a passenger. Then over the M.C. tracks at Michigan Center. Two passengers leave; three climb aboard. Then on to Grass Lake village, where the conductor signs with the local agent a bill of lading for a package to be delivered in Detroit.

Next into Chelsea village, a loop into the town and out, a wasted four miles.

There's the odd little brick waiting room at Lima Center where one of the passengers insists on climbing out to buy her son Willie a package of Cracker Jacks for the tedious hours ahead.

The proud motorman, like a Roman Charioteer, sounds his air horn for cross roads at Dexter and Delhi. There are the Jackson Avenue fairgrounds, and after a dip under the Ann Arbor Railroad tracks we've come to the interurban station at Ann Arbor where, at the lunch counter, some of our potential passengers are chewing away at pumpkin pies.

Into the station door the conductor calls, “All Aboard for Ypsilanti, Denton, Sheldon, Wayne, Eliose, Dearborn, Springwells-and Deeetroit.”

First half of the 3-hour trek has gone well. At Ypsilanti there were some students with heavy luggage, waiting on Zwergel's steps. Two toots of the air horn and they rush to get aboard.

Down Cross St. hill and we turn into Washington Street, passing the fire house. It's a chilly morning and the passenger agent in the Ypsi depot is stoking the big jumbo stove with floor sweepings, candy wrappers and box wood.

Around the corner, onto Michigan Avenue down the hill to the bridge and the powerhouse on the east side where we take on more air for our brakes. The next 30 miles are rough, though the first half of the ride into Detroit isn't bad, past Denton, Sheldon, Wayne, Eliose and Dearborn, where we meet double tracks.

The rest of the way in, there's our headache.

No longer is the motorman King of the Highways.

From the Boulevard, the last three miles, you fight your way in, clanging that big brass gong, sounding the air horn.

By now the conductor is up front, too, for he has to climb down to the street to turn onto Shelby Street. Then down toward the docks and along Woodbridge, the street that parallels the river, past several trucks pulled by horses.

A momentary respite. You sound the horn, three smart toots, and the girl from Vernor's Ginger Ale party store runs out with a tray on which are two cream-soda ginger ales with straws.

We inch along Woodbridge to Bates Street hill to Jefferson, where upon the conductor calls “Deeetroit! Deeetroit waiting room.” All the passengers with their packages and umbrellas leave, and a host of new ones climb aboard.

We cross Jefferson Avenue, make a left turn at Larned, cross Woodward and again are on Michigan Avenue, fighting our way past the ball park, Western Market, the Boulevard, to Schaefer's Switch.

At our private phone booth we get orders and now can sigh with relief because we are on private right-of-way, clear sailing past Dearborn, Eliose, Wayne, and over the MC bridge and down the hill-and the conductor yells “Ypsilanti! All aboard for Ann Arbor, Delhi, Dexter, Chelsea, Grass Lake, Michigan Center; making connection at Jackson to Parma, Albion, Marshall, Battle Creek and Kalamazoo!”

Seems there ought to be some easier way to earn a living. All the man at the other end has to do is take tickets, stoke the little hard coal furnace, pull the bell cord when someone wants to get off, count the day's receipts, find lost umbrellas, open and close windows for neurotic passengers, break up a fight, eat candy bars, call stations so folks won't go past their stops, fill the ice water tap rack with more drinking cups, turn the ceiling lights off and on and console a confused farmer late for getting home at milking time.

Three years up front, 1,100 long days, and you've had enough. Al Augustus told me. Then, be content to ride the back end clear ‘til pension time.