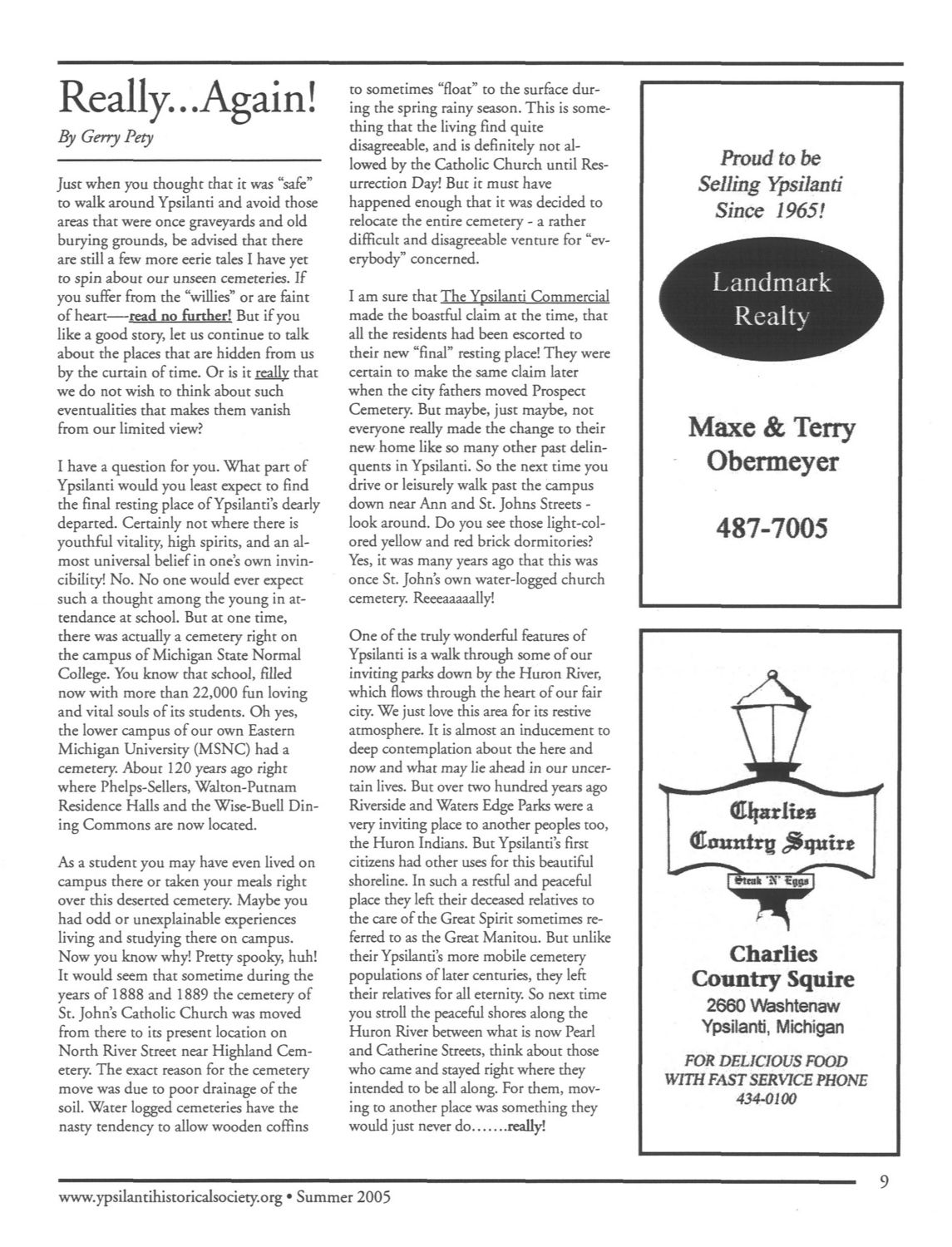 Just when you thought that it was “safe” to walk around Ypsilanti and avoid those areas that were once graveyards and old burying grounds, be advised that there are still a few more eerie tales I have yet to spin about our unseen cemeteries. If you suffer from the “willies”” or are faint of heart—
read no further!
But if you like a good story, let us continue to talk about the places that are hidden from us by the curtain of time. Or is it really that we do not wish to think about such eventualities that makes them vanish from our limited view?

I have a question for your. What part of Ypsilanti would you least expect to find the final resting place of Ypsilanti's dearly departed. Certainly not where there is youthful vitality, high spirits, and an almost universal belief in one's own invincibility! No. No one would ever expect such a thought among the young in attendance at school. But at one time, there was actually a cemetery right on the campus of Michigan State Normal College. You know that school, filled now with more than 22,000 fun loving and vital souls of its students. Oh yes, the lower campus of our own Eastern Michigan University (MSNC) had a cemetery. About 120 years ago right where Phelps-Sellers, Walton-Putnam Residence Halls and the Wise-Buell Dining Commons are now located.

As a student you may have even lived on campus there or taken your meals right over this deserted cemetery. Maybe you had odd or unexplainable experiences living and studying there on campus. Now you known why! Pretty spooky, huh! It would seem that sometime during the years of 1888 and 1889 the cemetery of St. John's Catholic Church was moved from there to its present location on North River Street near Highland Cemetery. The exact reason for the cemetery move was due to poor drainage of the soil. Water logged cemeteries have the nasty tendency to allow wooden coffins to sometimes “float” to the surface during the spring rainy season. This is something that the living find quite disagreeable, and is definitely not allowed by the Catholic Church until Resurrection Day! But it must have happened enough that it was decided to relocate the entire cemetery-a rather difficult and disagreeable venture for “everybody”” concerned.

I am sure that The Ypsilanti Commercial made the boastful claim at the time, that all the residents had been escorted to their new “final” resting place! They were certain to make the same claim later when the city fathers moved Prospect Cemetery. But maybe, just maybe, not everyone really made the change to their new home like so many other past delinquents in Ypsilanti. So the next time you drive or leisurely walk past the campus down near Ann and St. Johns Streets-look around. Do you see those light-colored yellow and red brick dormitories? Yes, it was many years ago that this was once St. John's own water-logged church cemetery. Reeeaaaaally!

One of the truly wonderful features of Ypsilanti is a walk through some of our inviting parks down by the Huron River, which flows through the heart of our fair city. We just love this area for its restive atmosphere. It is almost an inducement to deep contemplation about the here and now and what may lie ahead in our uncertain lives. But over two hundred years ago Riverside and Waters Edge Parks were a very inviting place to another peoples too, the Huron Indians. But Ypsilanti's first citizens had other uses for this beautiful shoreline. In such a restful and peaceful place they left their deceased relatives to the care of the Great Spirit sometimes referred to as the Great Manitou. But unlike their Ypsilanti's more mobile cemetery populations of later centuries, they left their relatives for all eternity. So next time you stroll the peaceful shores along the Huron River between what is now Pearl and Catherine Streets, think about those who came and stayed right where they intended to be all along. For them, moving to another place was something they would just never do……really!