One Hundred Eighty One Years of Methodism in Ypsilanti 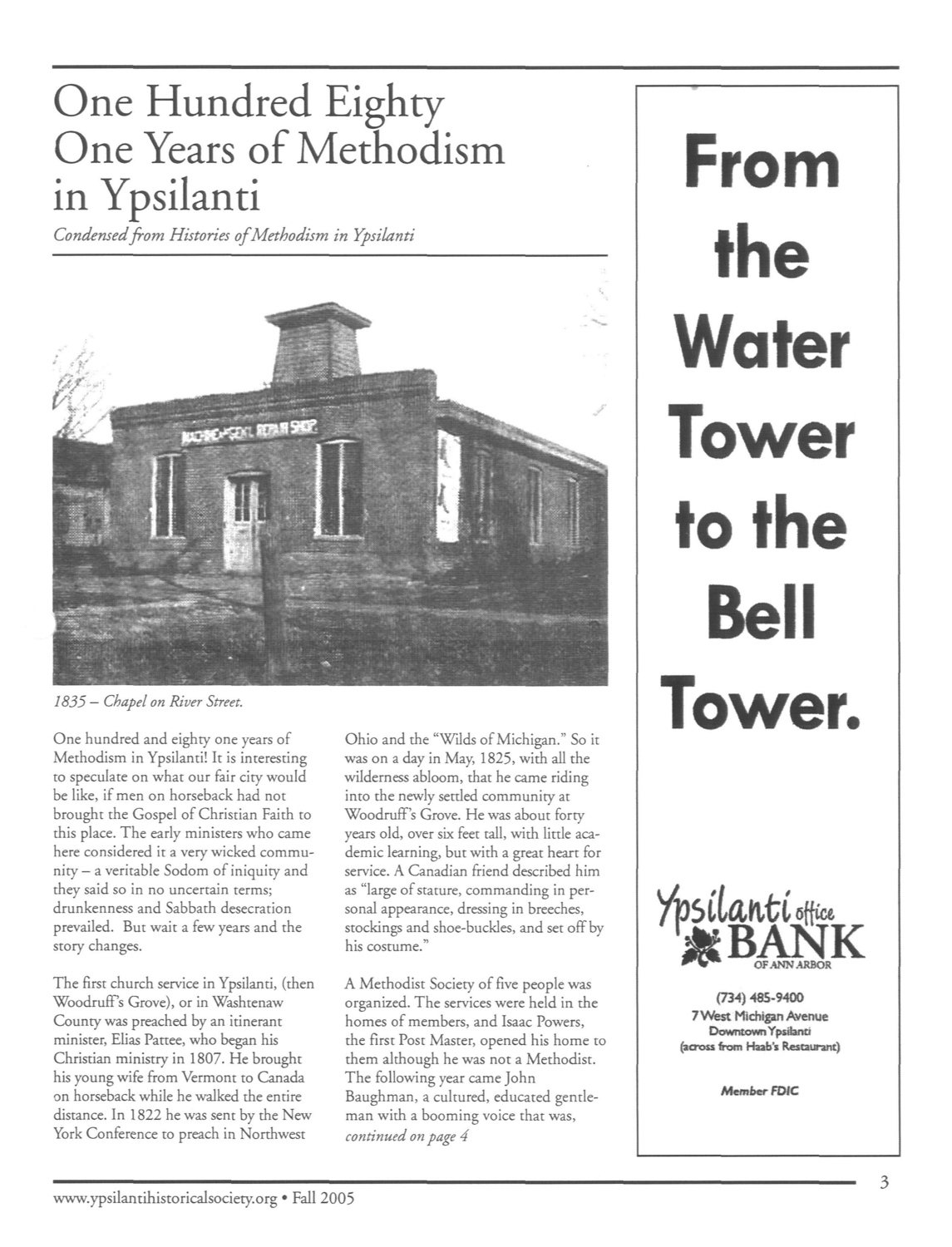 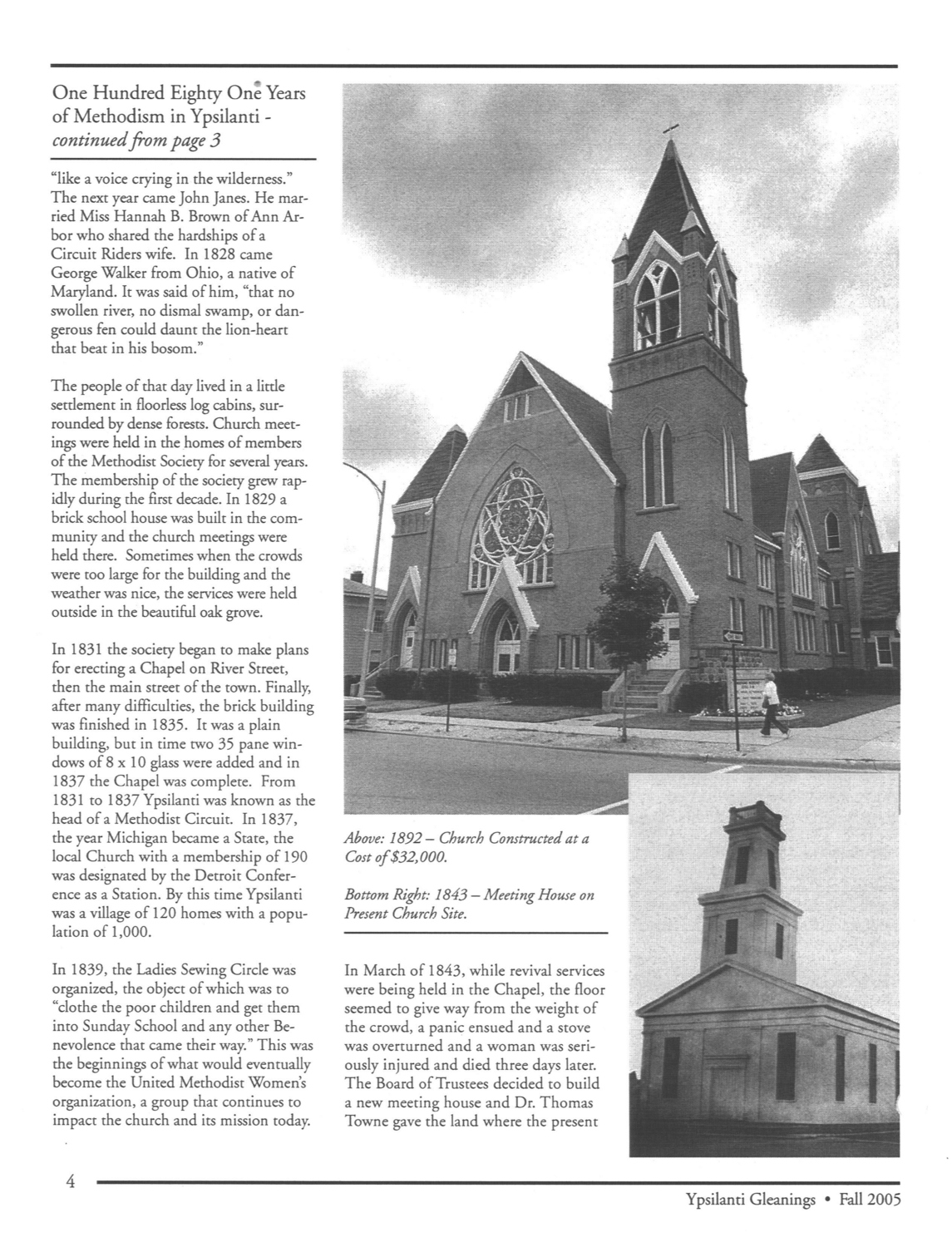 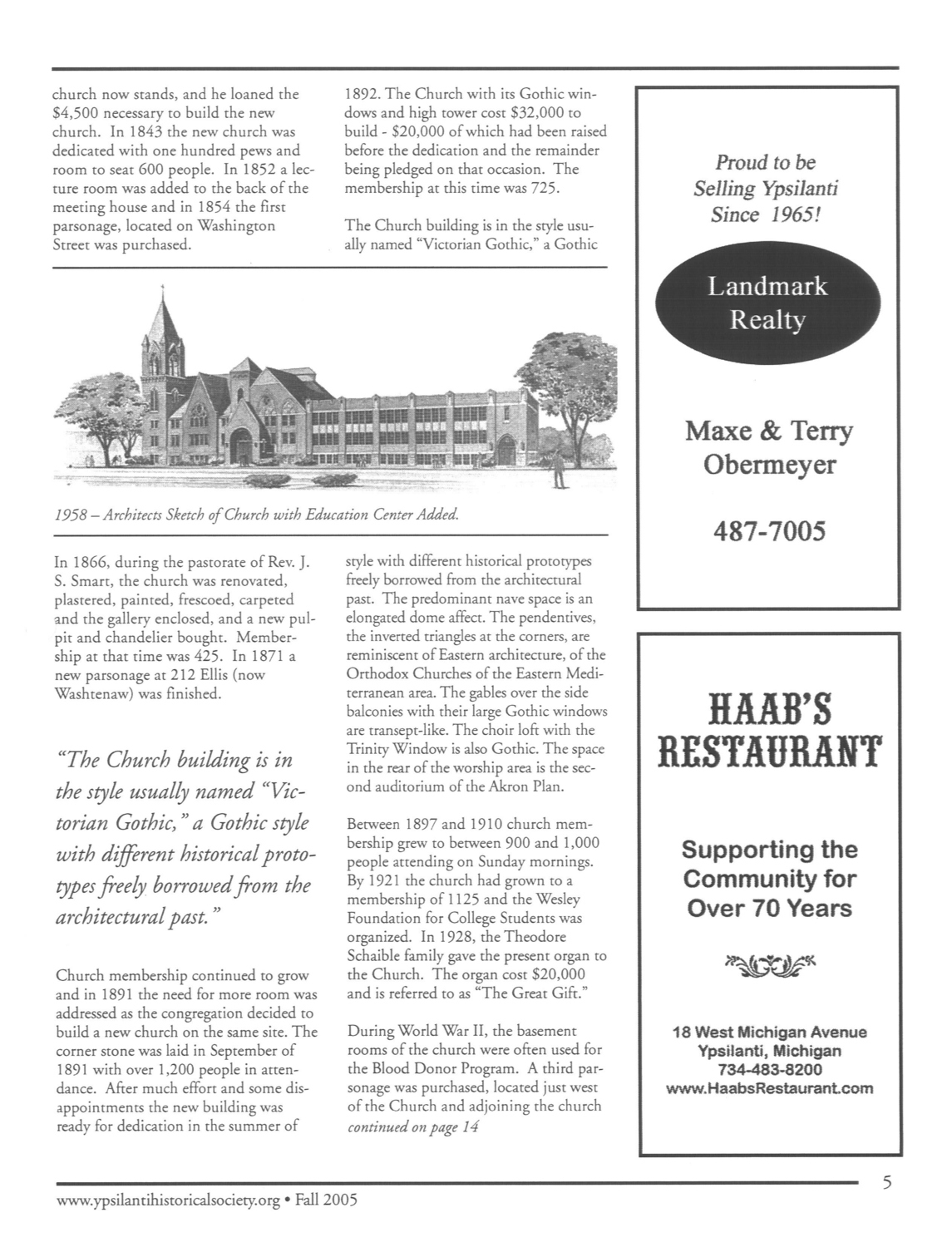 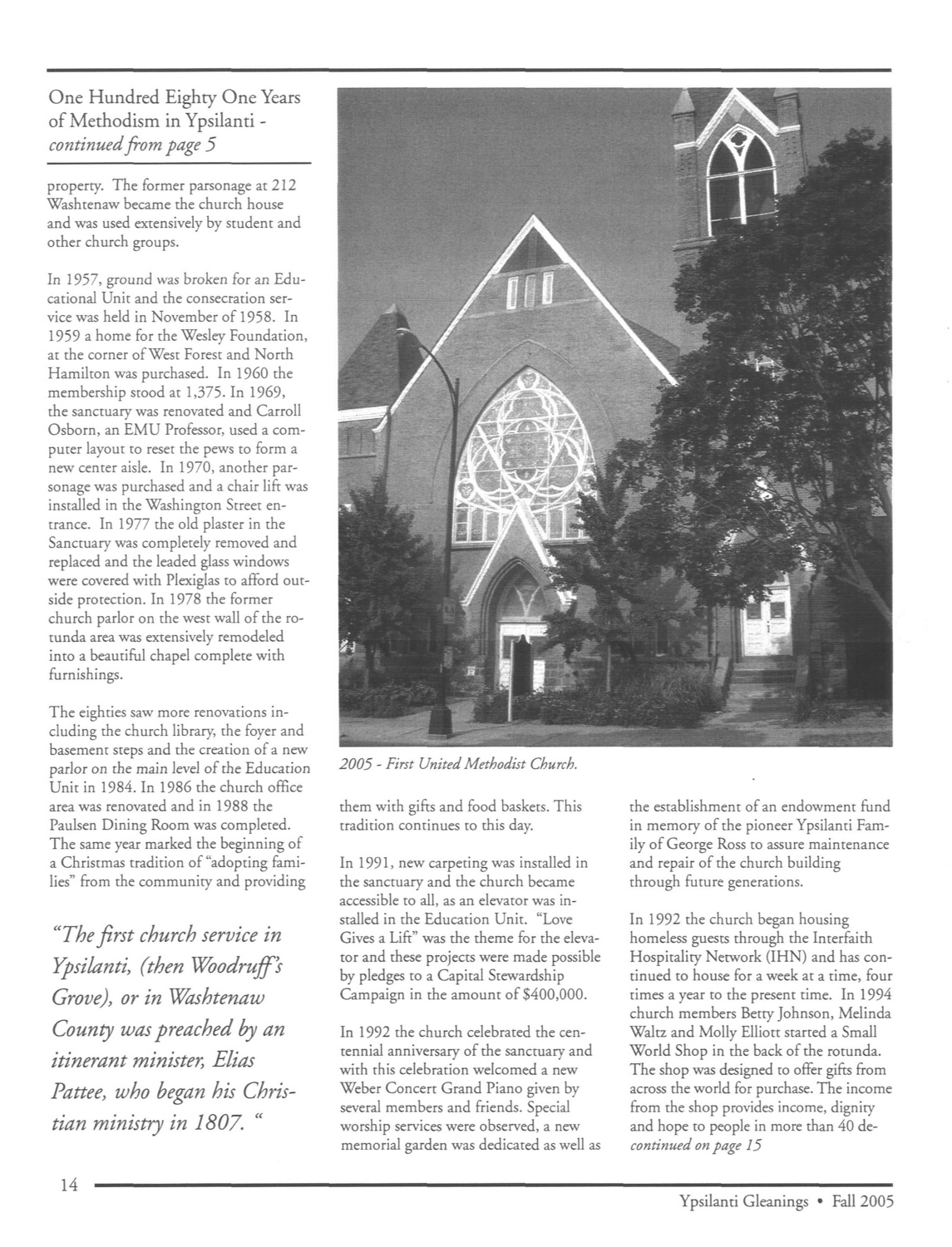 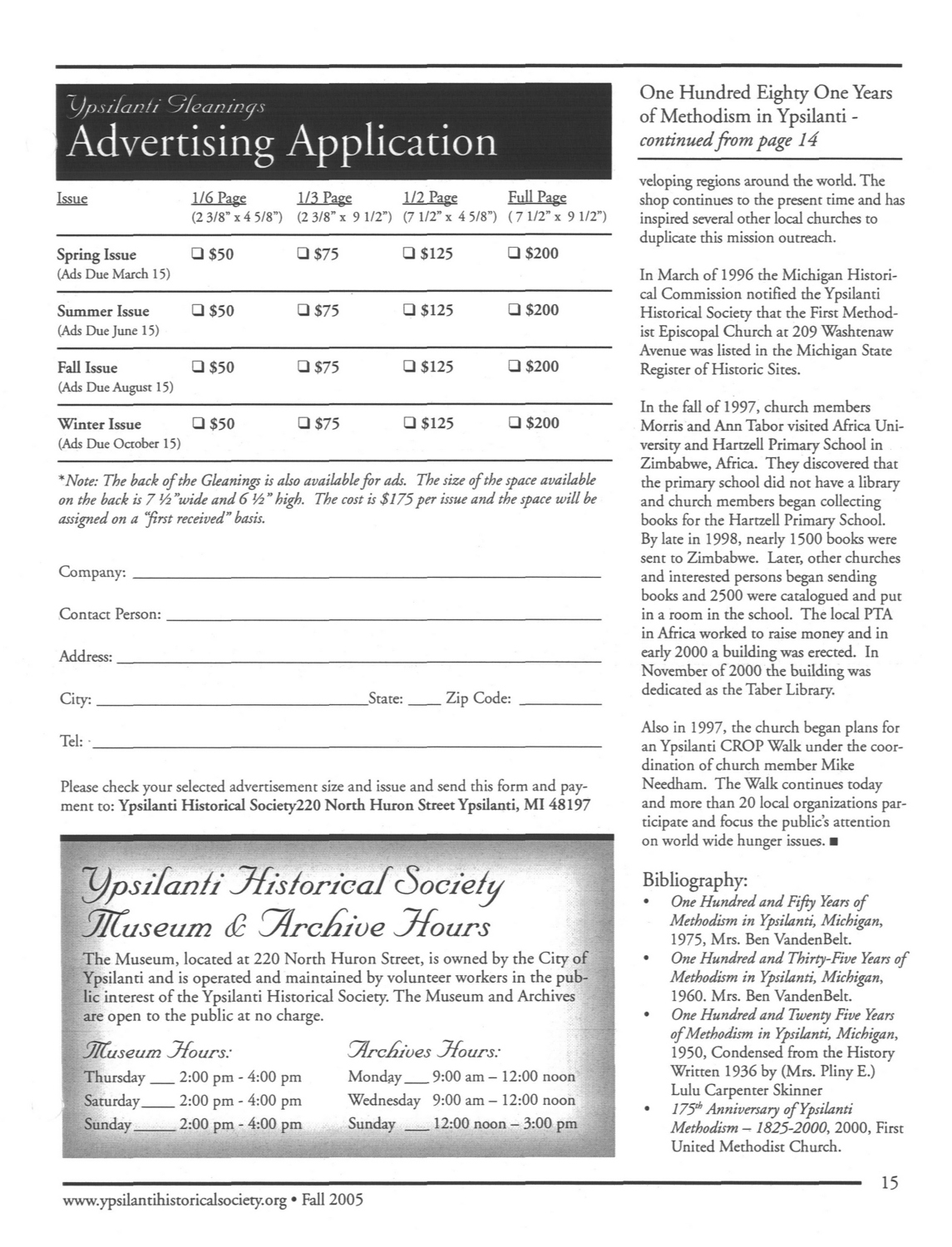 Condensed from Histories of Methodism in Ypsilanti

One hundred and eighty one years of Methodism in Ypsilanti! It is interesting to speculate on what our fair city would be like, if men on horseback had not brought the Gospel of Christian Faith to this place. The early ministers who came here considered it a very wicked community — a veritable Sodom of iniquity and they said so in no uncertain terms; drunkenness and Sabbath desecration prevailed. But wait a few years and the story changes.

The first church service in Ypsilanti, (then Woodruff's Grove), or in Washtenaw County was preached by an itinerant minister, Elias Pattee, who began his Christian ministry in 1807. He brought his young wife from Vermont to Canada on horseback while he walked the entire distance. In 1822 he was sent by the New York Conference to preach in Northwest Ohio and the “Wilds of Michigan.” So it was on a day in May, 1825, with all the wilderness abloom, that he came riding into the newly settled community at Woodruff's Grove. He was about forty years old, over six feet tall, with little academic learning, but with a great heart for service. A Canadian friend described him as “large of stature, commanding in personal appearance, dressing in breeches, stockings and shoe-buckles, and set off by his costume.”

A Methodist Society of five people was organized. The services were held in the homes of members, and Isaac Powers, the first Post Master, opened his home to them although he was not a Methodist. The following year came John Baughman, a cultured, educated gentleman with a booming voice that was, “like a voice crying in the wilderness.” The next year came John Janes. He married Miss Hannah B. Brown of Ann Arbor who shared the hardships of a Circuit Riders wife. In 1828 came George Walker from Ohio, a native of Maryland. It was said of him, “that no swollen river, no dismal swamp, or dangerous fen could daunt the lion-heart that beat in his bosom.”

The people of that day lived in a little settlement in floorless log cabins, surrounded by dense forests. Church meetings were held in the homes of members of the Methodist Society for several years. The membership of the society grew rapidly during the first decade. In 1829 a brick school house was built in the community and the church meetings were held there. Sometimes when the crowds were too large for the building and the weather was nice, the services were held outside in the beautiful oak grove.

In 1831 the society began to make plans for erecting a Chapel on River Street, then the main street of the town. Finally, after many difficulties, the brick building was finished in 1835. It was a plain building, but in time two 35 pane windows of 8 × 10 glass were added and in 1837 the Chapel was complete. From 1831 to 1837 Ypsilanti was known as the head of a Methodist Circuit. In 1837, the year Michigan became a State, the local Church with a membership of 190 was designated by the Detroit Conference as a Station. By this time Ypsilanti was a village of 120 homes with a population of 1,000.

In 1839, the Ladies Sewing Circle was organized, the object of which was to “clothe the poor children and get them into Sunday School and any other Benevolence that came their way.” This was the beginnings of what would eventually become the United Methodist Women's organization, a group that continues to impact the church and its mission today.

In March of 1843, while revival services were being held in the Chapel, the floor seemed to give way from the weight of the crowd, a panic ensued and a stove was overturned and a woman was seriously injured and died three days later. The Board of Trustees decided to build a new meeting house and Dr. Thomas Towne gave the land where the present church now stands, and he loaned the &dollar;4,500 necessary to build the new church. In 1843 the new church was dedicated with one hundred pews and room to seat 600 people. In 1852 a lecture room was added to the back of the meeting house and in 1854 the first parsonage, located on Washington Street was purchased.

“The Church building is in the style usually named “Victorian Gothic,” a Gothic style with different historical prototypes freely borrowed from the architectural past.”

Church membership continued to grow and in 1891 the need for more room was addressed as the congregation decided to build a new church on the same site. The corner stone was laid in September of 1891 with over 1,200 people in attendance. After much effort and some disappointments the new building was ready for dedication in the summer of 1892. The Church with its Gothic windows and high tower cost &dollar;32,000 to build-&dollar;20,000 of which had been raised before the dedication and the remainder being pledged on that occasion. The membership at this time was 725.

The Church building is in the style usually named “Victorian Gothic,” a Gothic style with different historical prototypes freely borrowed from the architectural past. The predominant nave space is an elongated dome affect. The pendentives, the inverted triangles at the corners, are reminiscent of Eastern architecture, of the Orthodox Churches of the Eastern Mediterranean area. The gables over the side balconies with their large Gothic windows are transept-like. The choir loft with the Trinity Window is also Gothic. The space in the rear of the worship area is the second auditorium of the Akron Plan.

Between 1897 and 1910 church membership grew to between 900 and 1,000 people attending on Sunday mornings. By 1921 the church had grown to a membership of 1125 and the Wesley Foundation for College Students was organized. In 1928, the Theodore Schaible family gave the present organ to the Church. The organ cost &dollar;20,000 and is referred to as “The Great Gift.”

During World War II, the basement rooms of the church were often used for the Blood Donor Program. A third parsonage was purchased, located just west of the Church and adjoining the church property. The former parsonage at 212 Washtenaw became the church house and was used extensively by student and other church groups.

In 1957, ground was broken for an Educational Unit and the consecration service was held in November of 1958. In 1959 a home for the Wesley Foundation, at the corner of West Forest and North Hamilton was purchased. In 1960 the membership stood at 1,375. In 1969, the sanctuary was renovated and Carroll Osborn, an EMU Professor, used a computer layout to reset the pews to form a new center aisle. In 1970, another parsonage was purchased and a chair lift was installed in the Washington Street entrance. In 1977 the old plaster in the Sanctuary was completely removed and replaced and the leaded glass windows were covered with Plexiglas to afford outside protection. In 1978 the former church parlor on the west wall of the rotunda area was extensively remodeled into a beautiful chapel complete with furnishings.

The eighties saw more renovations including the church library, the foyer and basement steps and the creation of a new parlor on the main level of the Education Unit in 1984. In 1986 the church office area was renovated and in 1988 the Paulsen Dining Room was completed. The same year marked the beginning of a Christmas tradition of “adopting families” from the community and providing them with gifts and food baskets. This tradition continues to this day.

In 1991, new carpeting was installed in the sanctuary and the church became accessible to all, as an elevator was installed in the Education Unit. “Love Gives a Lift” was the theme for the elevator and these projects were made possible by pledges to a Capital Stewardship Campaign in the amount of &dollar;400,000.

In 1992 the church celebrated the centennial anniversary of the sanctuary and with this celebration welcomed a new Weber Concert Grand Piano given by several members and friends. Special worship services were observed, a new memorial garden was dedicated as well as the establishment of an endowment fund in memory of the pioneer Ypsilanti Family of George Ross to assure maintenance and repair of the church building through future generations.

In 1992 the church began housing homeless guests through the Interfaith Hospitality Network (IHN) and has continued to house for a week at a time, four times a year to the present time. In 1994 church members Betty Johnson, Melinda Waltz and Molly Elliott started a Small World Shop in the back of the rotunda. The shop was designed to offer gifts from across the world for purchase. The income from the shop provides income, dignity and hope to people in more than 40 developing regions around the world. The shop continues to the present time and has inspired several other local churches to duplicate this mission outreach.

In March of 1996 the Michigan Historical Commission notified the Ypsilanti Historical Society that the First Methodist Episcopal Church at 209 Washtenaw Avenue was listed in the Michigan State Register of Historic Sites.

In the fall of 1997, church members Morris and Ann Tabor visited Africa University and Hartzell Primary School in Zimbabwe, Africa. They discovered that the primary school did not have a library and church members began collecting books for the Hartzell Primary School. By late in 1998, nearly 1500 books were sent to Zimbabwe. Later, other churches and interested persons began sending books and 2500 were catalogued and put in a room in the school. The local PTA in Africa worked to raise money and in early 2000 a building was erected. In November of 2000 the building was dedicated as the Taber Library.

Also in 1997, the church began plans for an Ypsilanti CROP Walk under the coordination of church member Mike Needham. The Walk continues today and more than 20 local organizations participate and focus the public's attention on world wide hunger issues.


Photo Caption: The first church service in Ypsilanti, (then Woodruff's Grove), or in Washtenaw County was preached by an itinerant minister, Elias Pattee, who began his Christian ministry in 1807.
Photo Caption: 1843 - Meeting House on Present Church Site.
Photo Caption: In 1866, during the pastorate of Rev. J. S. Smart, the church was renovated, plastered, painted, frescoed, carpeted and the gallery enclosed, and a new pulpit and chandelier bought. Membership at that time was 425. In 1871 a new parsonage at 212 Ellis (now Washtenaw) was finished.
Photo Caption: 1958 - Architects Sketch of Church with Education Center Added.
Photo Caption: 1892 - Church Constructed at a Cost of $32,000.
Photo Caption: 2005-First United Methodist Church.