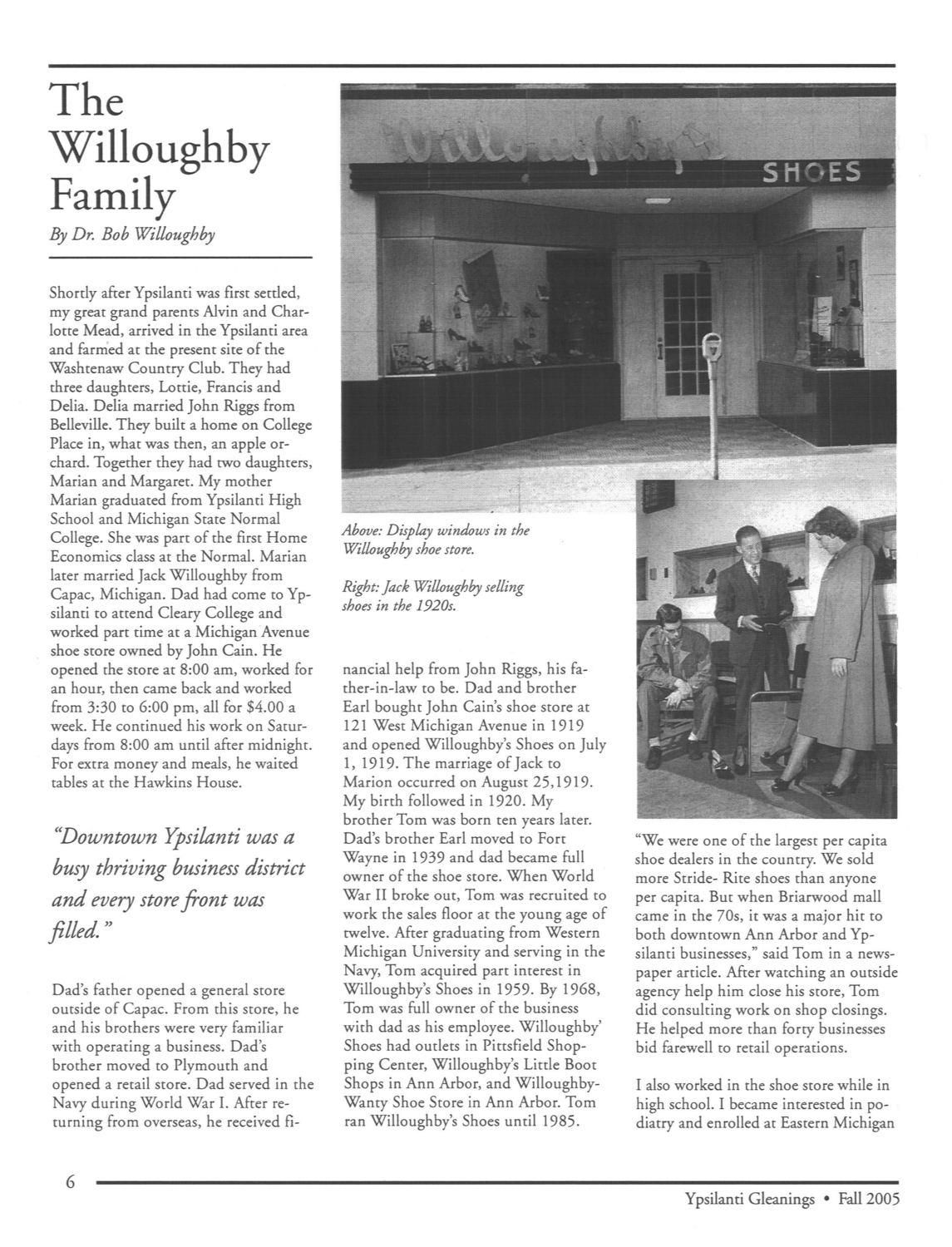 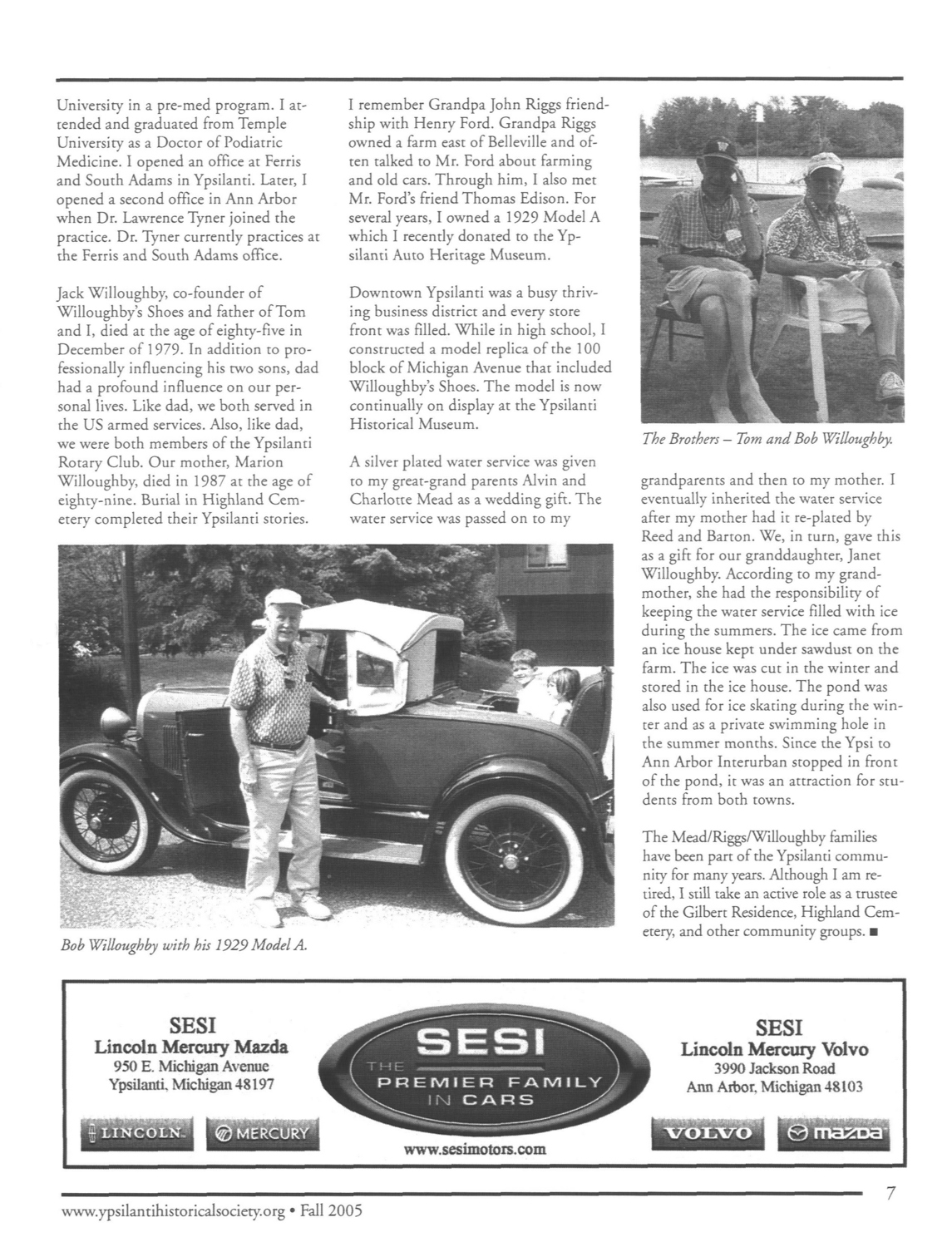 Shortly after Ypsilanti was first settled, my great grand parents Alvin and Charlotte Mead, arrived in the Ypsilanti area and farmed at the present site of the Washtenaw Country Club. They had three daughters, Lottie, Francis and Delia. Delia married John Riggs from Belleville. They built a home on College Place in, what was then, an apple orchard. Together they had two daughters, Marian and Margaret. My mother Marian graduated from Ypsilanti High School and Michigan State Normal College. She was part of the first Home Economics class at the Normal. Marian later married Jack Willoughby from Capac, Michigan. Dad had come to Ypsilanti to attend Cleary College and worked part time at a Michigan Avenue shoe store owned by John Cain. He opened the store at 8:00 am, worked for an hour, then came back and worked from 3:30 to 6:00 pm, all for &dollar;4.00 a week. He continued his work on Saturdays from 8:00 am until after midnight. For extra money and meals, he waited tables at the Hawkins House.

Dad's father opened a general store outside of Capac. From this store, he and his brothers were very familiar with operating a business. Dad's brother moved to Plymouth and opened a retail store. Dad served in the Navy during World War I. After returning from overseas, he received financial help from John Riggs, his father-in-law to be. Dad and brother Earl bought John Cain's shoe store at 121 West Michigan Avenue in 1919 and opened Willoughby's Shoes on July 1, 1919. The marriage of Jack to Marion occurred on August 25, 1919. My birth followed in 1920. My brother Tom was born ten years later. Dad's brother Earl moved to Fort Wayne in 1939 and dad became full owner of the shoe store. When World War II broke out, Tom was recruited to work the sales floor at the young age of twelve. After graduating from Western Michigan University and serving in the Navy, Tom acquired part interest in Willoughby's Shoes in 1959. By 1968, Tom was full owner of the business with dad as his employee. Willoughby' Shoes had outlets in Pittsfield Shopping Center, Willoughby's Little Boot Shops in Ann Arbor, and Willoughby-Wanty Shoe Store in Ann Arbor. Tom ran Willoughby's Shoes until 1985.

“We were one of the largest per capita shoe dealers in the country. We sold more Stride-Rite shoes than anyone per capita. But when Briarwood mall came in the 70s, it was a major hit to both downtown Ann Arbor and Ypsilanti businesses,” said Tom in a newspaper article. After watching an outside agency help him close his store, Tom did consulting work on shop closings. He helped more than forty businesses bid farewell to retail operations.

I also worked in the shoe store while in high school. I became interested in podiatry and enrolled at Eastern Michigan University in a pre-med program. I attended and graduated from Temple University as a Doctor of Podiatric Medicine. I opened an office at Ferris and South Adams in Ypsilanti. Later, I opened a second office in Ann Arbor when Dr. Lawrence Tyner joined the practice. Dr. Tyner currently practices at the Ferris and South Adams office.

Jack Willoughby, co-founder of Willoughby's Shoes and father of Tom and I, died at the age of eighty-five in December of 1979. In addition to professionally influencing his two sons, dad had a profound influence on our personal lives. Like dad, we both served in the US armed services. Also, like dad, we were both members of the Ypsilanti Rotary Club. Our mother, Marion Willoughby, died in 1987 at the age of eighty-nine. Burial in Highland Cemetery completed their Ypsilanti stories.

I remember Grandpa John Riggs friendship with Henry Ford. Grandpa Riggs owned a farm east of Belleville and often talked to Mr. Ford about farming and old cars. Through him, I also met Mr. Ford's friend Thomas Edison. For several years, I owned a 1929 Model A which I recently donated to the Ypsilanti Auto Heritage Museum.

Downtown Ypsilanti was a busy thriving business district and every store front was filled. While in high school, I constructed a model replica of the 100 block of Michigan Avenue that included Willoughby's Shoes. The model is now continually on display at the Ypsilanti Historical Museum.

A silver plated water service was given to my great-grand parents Alvin and Charlotte Mead as a wedding gift. The water service was passed on to my grandparents and then to my mother. I eventually inherited the water service after my mother had it re-plated by Reed and Barton. We, in turn, gave this as a gift for our granddaughter, Janet Willoughby. According to my grandmother, she had the responsibility of keeping the water service filled with ice during the summers. The ice came from an ice house kept under sawdust on the farm. The ice was cut in the winter and stored in the ice house. The pond was also used for ice skating during the winter and as a private swimming hole in the summer months. Since the Ypsi to Ann Arbor Interurban stopped in front of the pond, it was an attraction for students from both towns.

The Mead/Riggs/Willoughby families have been part of the Ypsilanti community for many years. Although I am retired, I still take an active role as a trustee of the Gilbert Residence, Highland Cemetery, and other community groups.