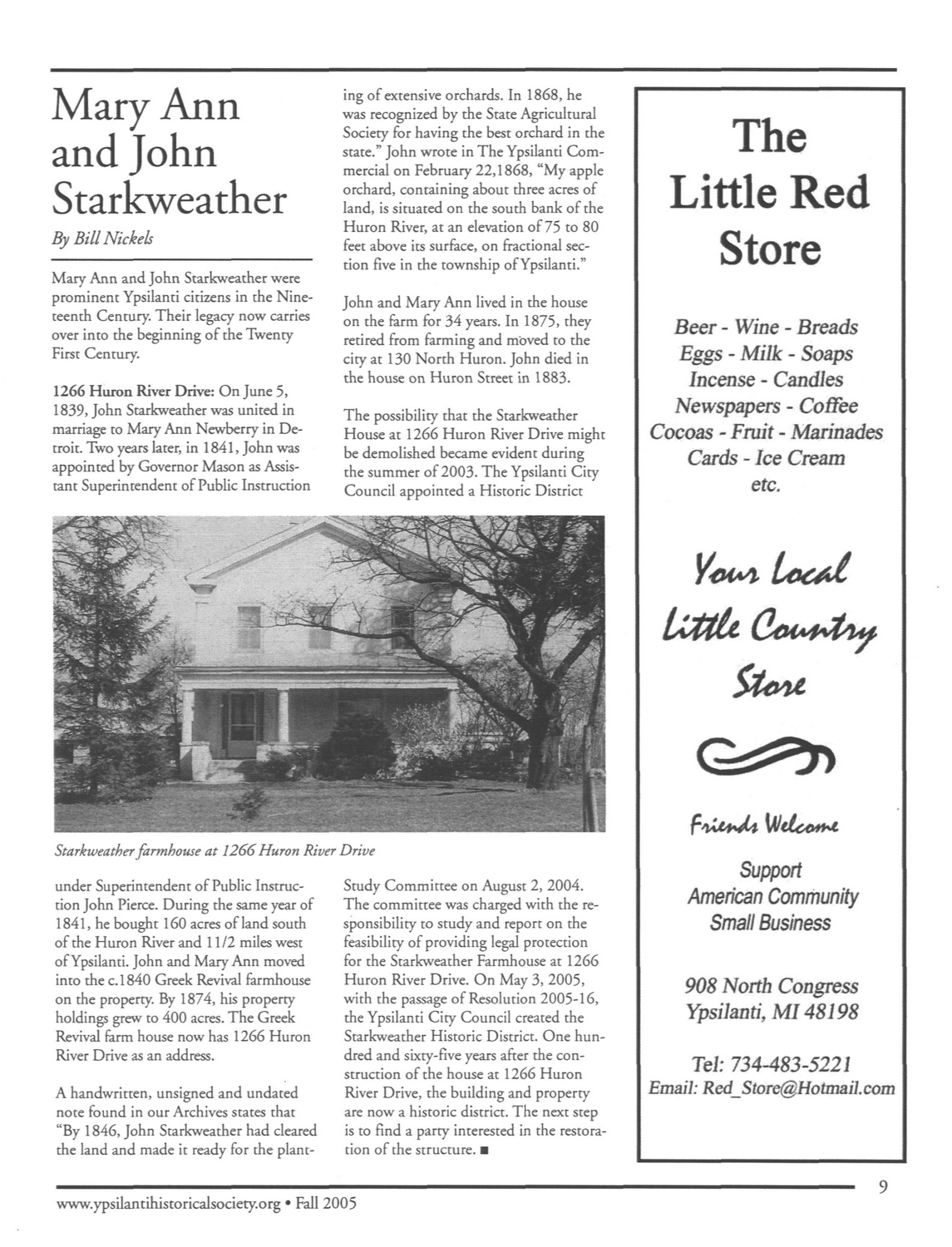 Mary Ann and John Starkweather were prominent Ypsilanti citizens in the Nineteenth Century. Their legacy now carries over into the beginning of the Twenty First Century.

1266 Huron River Drive: On June 5, 1839, John Starkweather was united in marriage to Mary Ann Newberry in Detroit. Two years later, in 1841, John was appointed by Governor Mason as Assistant Superintendent of Public Instruction under Superintendent of Public Instruction John Pierce. During the same year of 1841, he bought 160 acres of land south of the Huron River and 11/2 miles west of Ypsilanti. John and Mary Ann moved into the c. 1840 Greek Revival farmhouse on the property. By 1874, his property holdings grew to 400 acres. The Greek Revival farm house now has 1266 Huron River Drive as an address.

A handwritten, unsigned and undated note found in our Archives states that “By 1846, John Starkweather had cleared the land and made it ready for the planting of extensive orchards. In 1868, he was recognized by the State Agricultural Society for having the best orchard in the state.” John wrote in The Ypsilanti Commercial on February 22, 1868, “My apple orchard, containing about three acres of land, is situated on the south bank of the Huron River, at an elevation of 75 to 80 feet above its surface, on fractional section five in the township of Ypsilanti.”

The possibility that the Strakweather House at 1266 Huron River Drive might be demolished became evident during the summer of 2003. The Ypsilanti City Council appointed a Historic District Study Committee on August 2, 2004. The committee was charged with the responsibility to study and report on the feasibility of providing legal protection for the Starkweather Farmhouse at 1266 Huron River Drive. On May 3, 2005, with the passage of Resolution 2005–16, the Ypsilanti City Council created the Starkweather Historic District. One hundred and sixty-five years after the construction of the house at 1266 Huron River Drive, the building and property are now a historic district. The next step is to find a party interested in the restoration of the structure.