Finds from the Fletcher White Archives 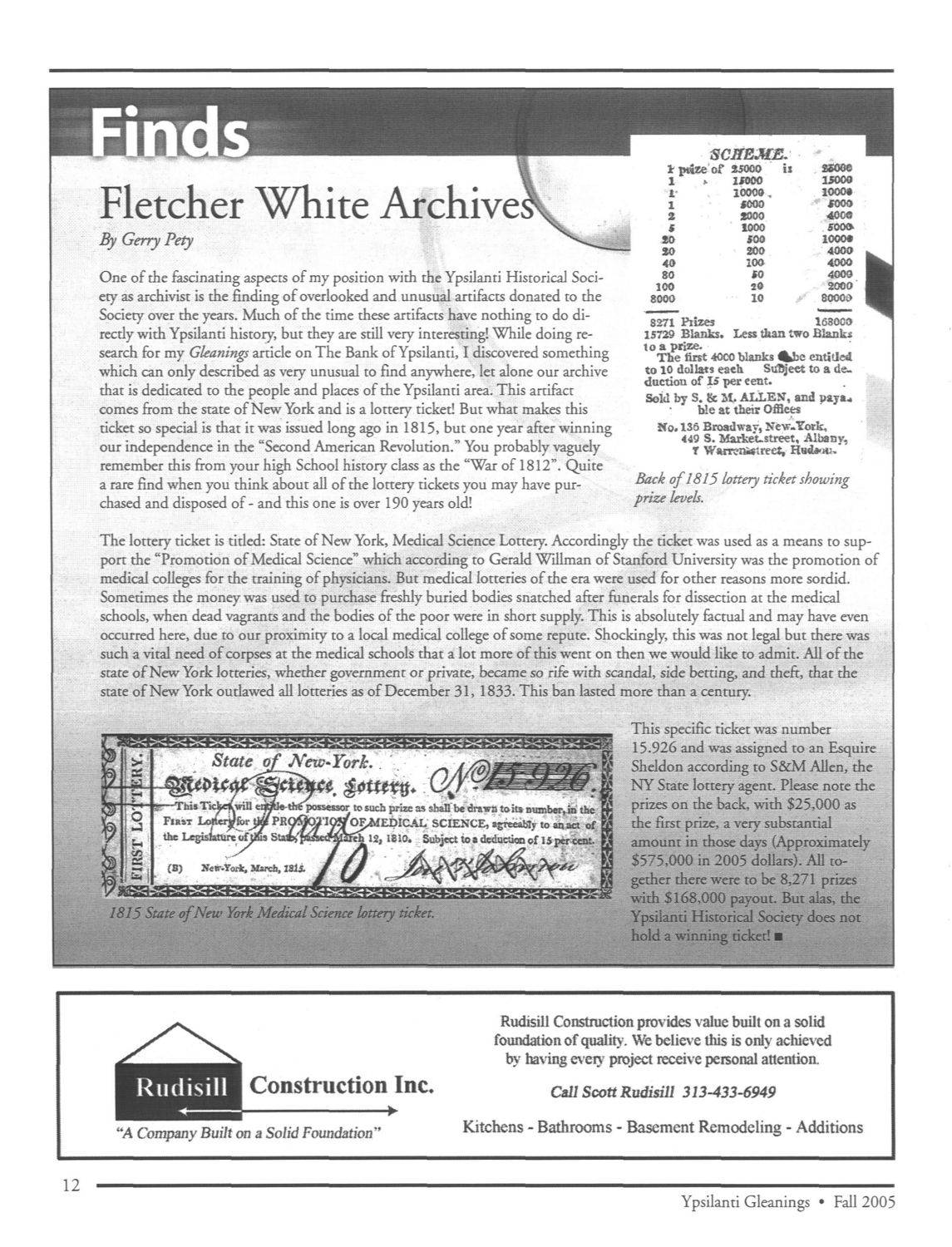 One of the fascinating aspects of my position with the Ypsilanti Historical Society as archivist is the finding of overlooked and unusual artifacts donated to the Society over the years. Much of the time these artifacts have nothing to do directly with Ypsilanti history, but they are still very interesting! While doing research for my Gleanings article on The Bank of Ypsilanti, I discovered something which can only described as very unusual to find anywhere, let alone our archive that is dedicated to the people and places of the Ypsilanti area. This artifact comes from the state of New York and is a lottery ticket! But what makes this ticket so special is that it was issued long ago in 1815, but one year after winning our independence in the “Second American Revolution.” You probably vaguely remember this from your high School history class as the “War of 1812”. Quite a rare find when you think about all of the lottery tickets you may have purchased and disposed of-and this one is over 190 years old!

The lottery ticket is titled: State of New York, Medical Science Lottery. Accordingly the ticket was used as a means to support the “Promotion of Medical Science” which according to Gerald Willman of Stanford University was the promotion of medical colleges for the training of physicians. But medical lotteries of the era were used for other reasons more sordid. Sometimes the money was used to purchase freshly buried bodies snatched after funerals for dissection at the medical schools, when dead vagrants and the bodies of the poor were in short supply. This is absolutely factual and may have even occurred here, due to our proximity to a local medical college of some repute. Shockingly, this was not legal but there was such a vital need of corpses at the medical schools that a lot more of this went on then we would like to admit. All of the state of New York lotteries, whether government or private, became so rife with scandal, side betting, and theft, that the state of New York outlawed all lotteries as of December 31, 1833. This ban lasted more than a century.

This specific ticket was number 15.926 and was assigned to an Esquire Sheldon according to S&M Allen, the NY State lottery agent. Please note the prizes on the back, with $25,000 as the first prize, a very substantial amount in those days (Approximately $575,000 in 2005 dollars). All together there were to be 8,271 prizes with $168,000 payout. But alas, the Ypsilanti Historical Society does not hold a winning ticket!