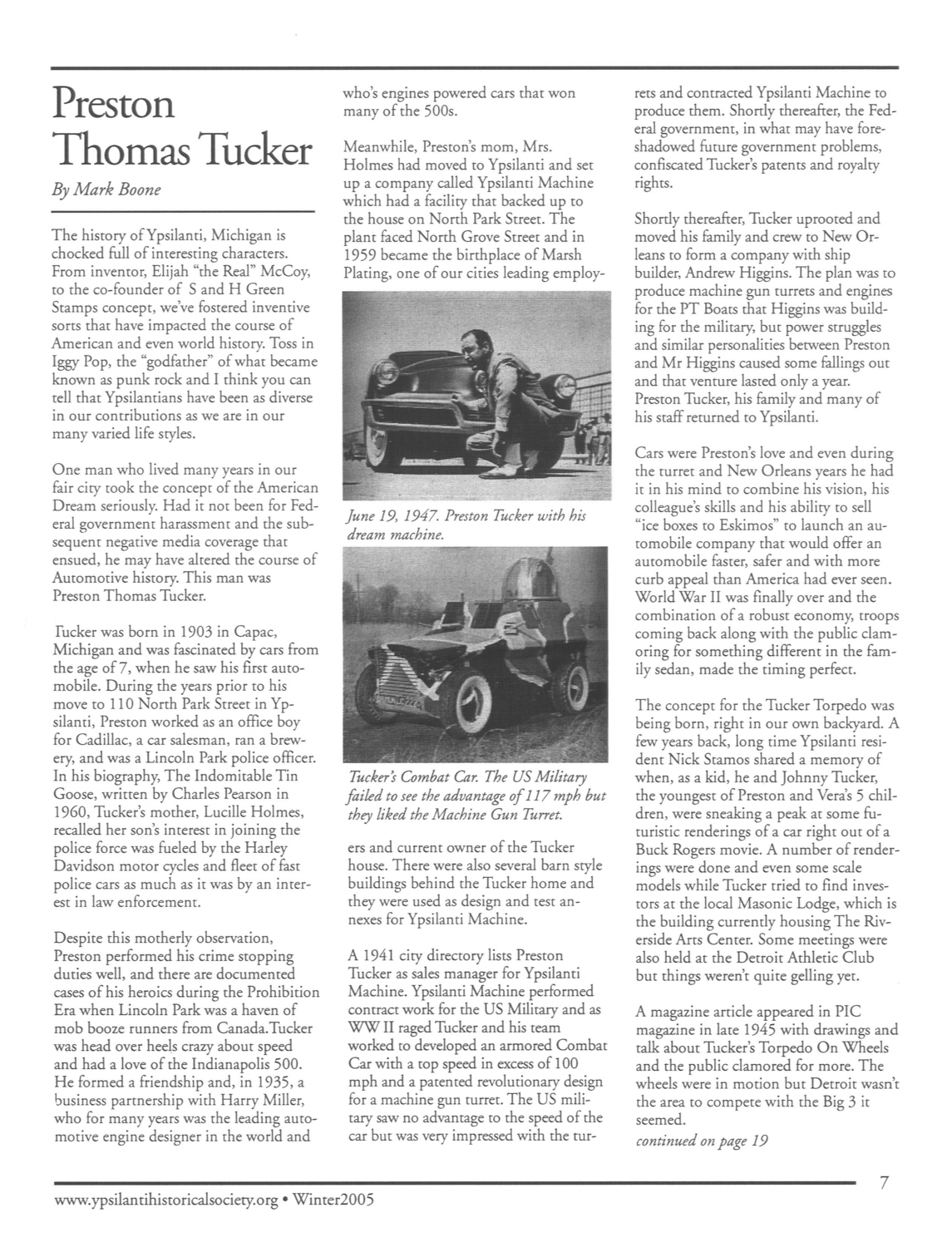 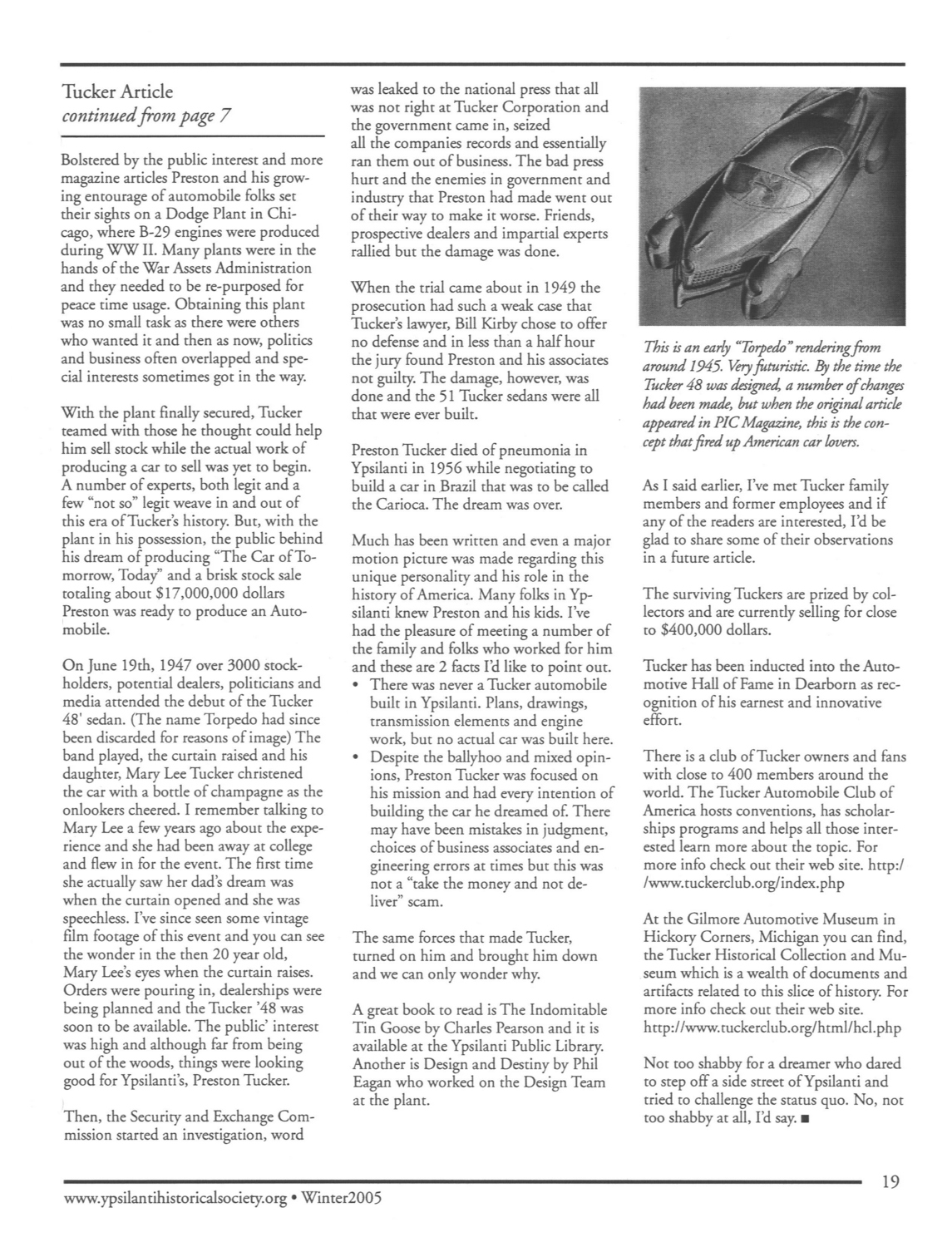 The history of Ypsilanti, Michigan is chocked full of interesting characters. From inventor, Elijah “the Real” McCoy, to the co-founder of S and H Green Stamps concept, we've fostered inventive sorts that have impacted the course of American and even world history. Toss in Iggy Pop, the “godfather” of what became known as punk rock and I think you can tell that Ypsilantians have been as diverse in our contributions as we are in our many varied life styles.

One man who lived many years in our fair city took the concept of the American Dream seriously. Had it not been for Federal government harassment and the subsequent negative media coverage that ensued, he may have altered the course of Automotive history. This man was Preston Thomas Tucker.

Tucker was born in 1903 in Capac, Michigan and was fascinated by cars from the age of 7, when he saw his first automobile. During the years prior to his move to 110 North Park Street in Ypsilanti, Preston worked as an office boy for Cadillac, a car salesman, ran a brewery, and was a Lincoln Park police officer. In his biography, The Indomitable Tin Goose, written by Charles Pearson in 1960, Tucker's mother, Lucille Holmes, recalled her son's interest in joining the police force was fueled by the Harley Davidson motor cycles and fleet of fast police cars as much as it was by an interest in law enforcement.

Despite this motherly observation, Preston performed his crime stopping duties well, and there are documented cases of his heroics during the Prohibition Era when Lincoln Park was a haven of mob booze runners from Canada. Tucker was head over heels crazy about speed and had a love of the Indianapolis 500. He formed a friendship and, in 1935, a business partnership with Harry Miller, who for many years was the leading automotive engine designer in the world and who's engines powered cars that won many of the 500s.

Meanwhile, Preston's mom, Mrs. Holmes had moved to Ypsilanti and set up a company called Ypsilanti Machine which had a facility that backed up to the house on North Park Street. The plant faced North Grove Street and in 1959 became the birthplace of Marsh Plating, one of our cities leading employers and current owner of the Tucker house. There were also several barn style buildings behind the Tucker home and they were used as design and test annexes for Ypsilanti Machine.

A 1941 city directory lists Preston Tucker as sales manager for Ypsilanti Machine. Ypsilanti Machine performed contract work for the US Military and as WW II raged Tucker and his team worked to developed an armored Combat Car with a top speed in excess of 100 mph and a patented revolutionary design for a machine gun turret. The US military saw no advantage to the speed of the car but was very impressed with the turrets and contracted Ypsilanti Machine to produce them. Shortly thereafter, the Federal government, in what may have foreshadowed future government problems, confiscated Tucker's patents and royalty rights.

Shortly thereafter, Tucker uprooted and moved his family and crew to New Orleans to form a company with ship builder, Andrew Higgins. The plan was to produce machine gun turrets and engines for the PT Boats that Higgins was building for the military, but power struggles and similar personalties between Preston and Mr Higgins caused some fallings out and that venture lasted only a year. Preston Tucker, his family and many of his staff returned to Ypsilanti.

Cars were Preston's love and even during the turret and New Orleans years he had it in his mind to combine his vision, his colleague's skills and his ability to sell “ice boxes to Eskimos” to launch an automobile company that would offer an automobile faster, safer and with more curb appeal than America had ever seen. World War II was finally over and the combination of a robust economy, troops coming back along with the public clamoring for something different in the family sedan, made the timing perfect.

The concept for the tucker Torpedo was being born, right in our own backyard. A few years back, long time Ypsilanti resident Nick Stamos shared a memory of when, as a kid, he and Johnny Tucker, the youngest of Preston and Vera's 5 children, were sneaking a peak at some futuristic renderings of a car right out of a Buck Rogers movie. A number of renderings were done and even some scale models while Tucker tried to find investors at the local Masonic Lodge, which is the building currently housing The Riverside Arts Center. Some meetings were also held at the Detroit Athletic Club but things weren't quite gelling yet.

A magazine article appeared in PIC magazine in late 1945 with drawings and talk about Tucker's Torpedo On Wheels and the public clamored for more. The wheels were in motion but Detroit wasn't the area to compete with the Big 3 it seemed.

Bolstered by the public interest and more magazine articles Preston and his growing entourage of automobile folks set their sights on a Dodge Plant in Chicago, where B-29 engines were produced during WW II. Many plants were in the hands of the War Assets Administration and they needed to be re-purposed for peace time usage. Obtaining this plant was no small task as there were others who wanted it and then as now, politics and business often overlapped and special interests sometimes got in the way.

With the plant finally secured, Tucker teamed with those he thought could help him sell stock while the actual work of producing a car to sell was yet to begin. A number of experts, both legit and a few “not so” legit weave in and out of this era of Tucker's history. But, with the plant in his possession, the public behind his dream of producing “The Car of Tomorrow, Today” and a brisk stock sale totaling about $17,000,000 dollars Preston was ready to produce an Automobile.

On June 19th, 1947 over 3000 stock-holders, potential dealers, politicians and media attended the debut of the Tucker 48 sedan. (The name Torpedo had since been discarded for reasons of image) The band played, the curtain raised and his daughter, Mary Lee Tucker christened the car with a bottle of champagne as the onlookers cheered. I remember talking to Mary Lee a few years ago about the experience and she had been away at college and flew in for the event. The first time she actually saw her dad's dream was when the curtain opened and she was speechless. I've since seen some vintage film footage of this event and you can see the wonder in the then 20 year old, Mary Lee's eyes when the curtain raises. Orders were pouring in, dealerships were being planned and the Tucker ‘48 was soon to be available. The public' interest was high and although far from being out of the woods, things were looking good for Ypsilanti's, Preston Tucker.

Then, the Security and Exchange Commission started an investigation, word was leaked to the national press that all was not right at Tucker Corporation and the government came in, seized all the companies records and essentially ran them out of business. The bad press hurt and the enemies in government and industry that Preston had made went out of their way to make it worse. Friends, prospective dealers and impartial experts rallied but the damage was done.

When the trial came about in 1949 the prosecution had such a weak case that Tucker's lawyer, Bill Kirby chose to offer no defense and in less than a half hour the jury found Preston and his associates not guilty. The damage, however, was done and the 51 Tucker sedans were all that were ever built.

Preston Tucker died of pneumonia in Ypsilanti in 1956 while negotiating to build a car in Brazil that was to be called the Carioca. The dream was over.

Much has been written and even a major motion picture was made regarding this unique personality and his role in the history of America. Many folks in Ypsilanti knew Preston and his kids. I've had the pleasure of meeting a number of the family and folks who worked for him and these are 2 facts I'd like to point out.

• There was never a Tucker automobile built in Ypsilanti. Plans, drawings, transmission elements and engine work, but no actual car was built here.
• Despite the ballyhoo and mixed opinions, Preston Tucker was focused on his mission and had every intention of building the car he dreamed of. There may have been mistakes in judgment, choices of business associates and engineering errors at times but this was not a “take the money and not deliver” scam.


The same forces that made Tucker, turned on him and brought him down and we can only wonder why.

A great book to read is The Indomitable Tin Goose by Charles Pearson and it is available at the Ypsilanti Public Library. Another is Design and Destiny by Phil Eagan who worked on the Design Team at the plant.

As I said earlier, I've met Tucker family members and former employees and if any of the readers are interested, I'd be glad to share some of their observations in a future article.

The surviving Tuckers are prized by collectors and are currently selling for close to &dollar;400,000 dollars.

Tucker has been inducted into the Automotive Hall of Fame in Dearborn as recognition of his earnest and innovative effort.

There is a club of Tucker owners and fans with close to 400 members around the world. The Tucker Automobile Club of America hosts conventions, has scholarships programs and helps all those interested learn more about the topic. For more info check out their web site. http:/ /www.tuckerclub.org/index.php

At the Gilmore Automotive Museum in Hickory Corners, Michigan you can find, the Tucker Historical Collection and Museum which is a wealth of documents and artifacts related to this slice of history. For more info check out their web site. http://www.tuckerclub.org/html/hcl.php

Not too shabby for a dreamer who dared to step off a side street of Ypsilanti and tried to challenge the status quo. No, not too shabby at all, I'd say.

Photo Caption: June 19, 1947. Preston Tucker with his dream machine.
Photo Caption: Tucker's Combat Car. The US Military failed to see the advantage of 117 mph but they liked the Machine Gun Turret.
Photo Caption: This is an early "Torpedo" rendering from around 1945. Very futuristic. By the time the tucker 48 was designed, a number of changes had been made, but when the original article appeared in PIC Magazine, this is the concept that fired up American car lovers.