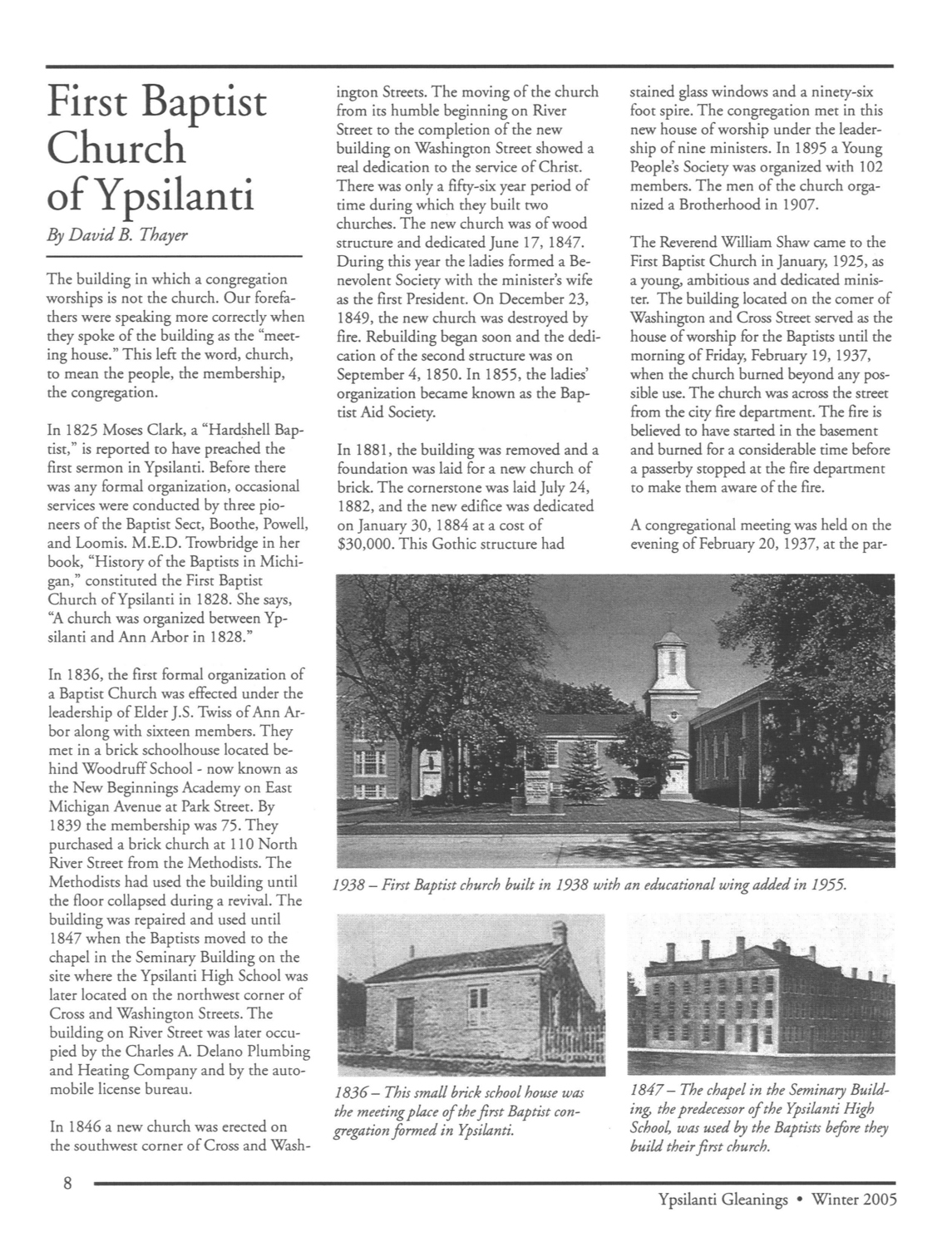 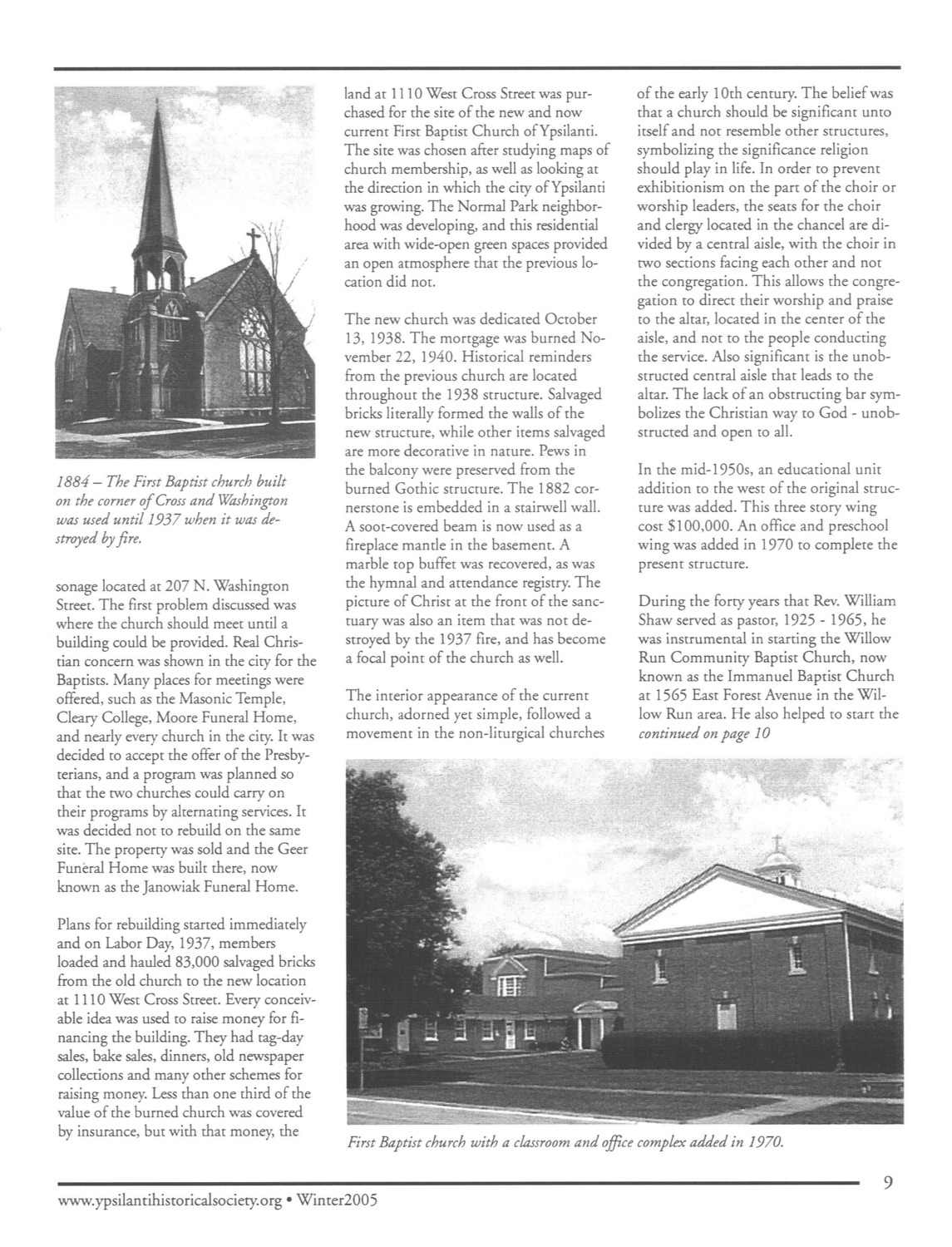 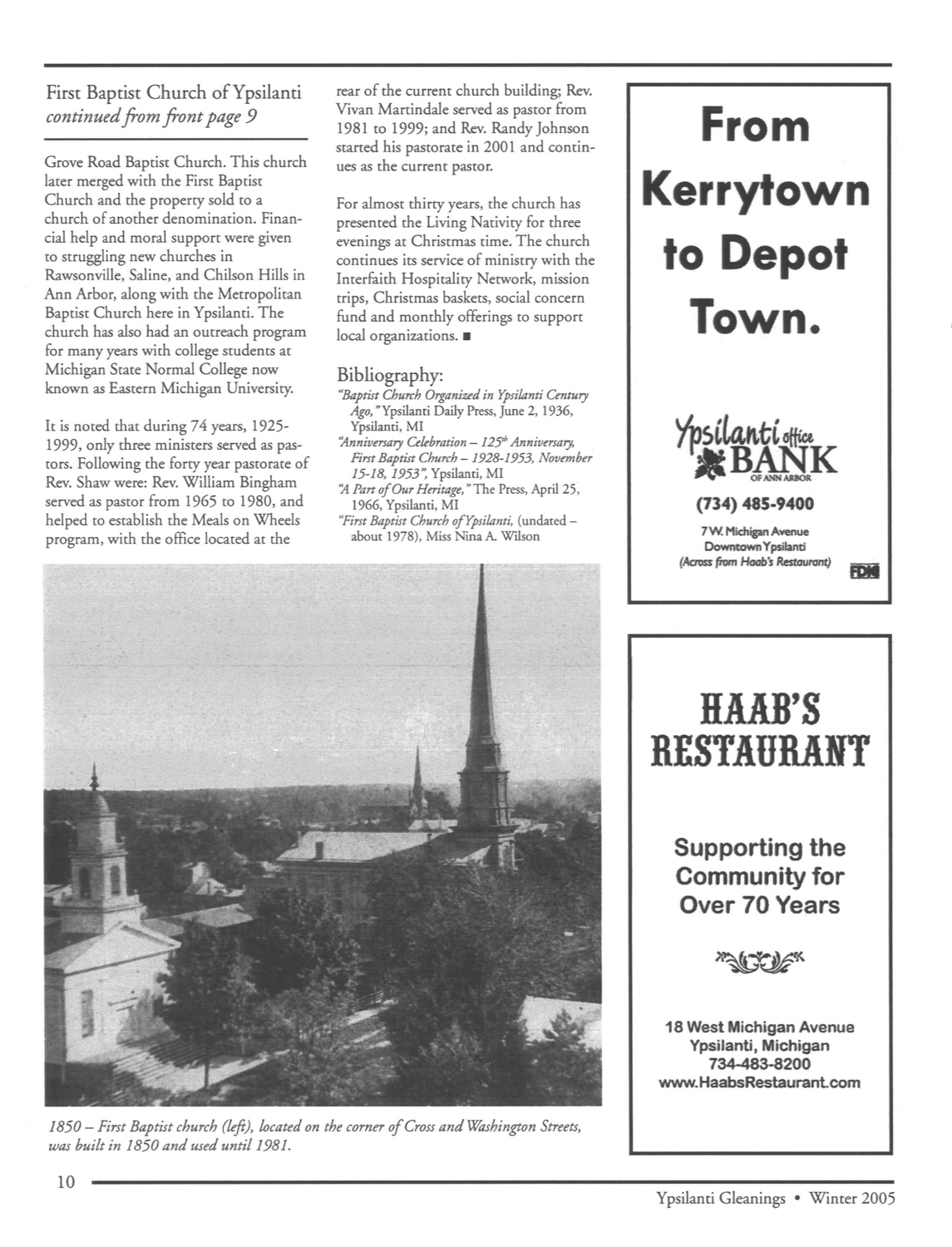 The building in which a congregation worships is not the church. Our forefathers were speaking more correctly when they spoke of the building as the “meeting house.” This left the word, church, to mean the people, the membership, the congregation.

In 1825 Moses Clark, a “Hardshell Baptist,” is reported to have preached the first sermon in Ypsilanti. Before there was any formal organization, occasional services were conducted by three pioneers of the Baptist Sect, Boothe, Powell, and Loomis. M.E.D. Trowbridge in her book, “History of the Baptists in Michigan,” constituted the First Baptist Church of Ypsilanti in 1828. She says, “A church was organized between Ypsilanti and Ann Arbor in 1828.”

In 1836, the first formal organization of a Baptist Church was effected under the leadership of Elder J.S. Twiss of Ann Arbor along with sixteen members. They met in a brick schoolhouse located behind Woodruff School-now known as the New Beginnings Academy on East Michigan Avenue at Park Street. By 1839 the membership was 75. They purchased a brick church at 110 North River Street from the Methodists. The Methodists had used the building until the floor collapsed during a revival. The building was repaired and used until 1847 when the Baptists moved to the chapel in the Seminary Building on the site where the Ypsilanti High School was later located on the northwest corner of Cross and Washington Streets. The building on River Street was later occupied by the Charles A. Delano Plumbing and Heating Company and by the automobile license bureau.

In 1846 a new church was erected on the southwest corner of Cross and Washington Streets. The moving of the church from its humble beginning on River Street to the completion of the new building on Washington Street showed a real dedication to the service of Christ. There was only a fifty-six year period of time during which they built two churches. The new church was of wood structure and dedicated June 17, 1847. During this year the ladies formed a Benevolent Society with the minister's wife as the first President. On December 23, 1849, the new church was destroyed by fire. Rebuilding began soon and the dedication of the second structure was on September 4, 1850. In 1855, the ladies' organization became known as the Baptist Aid Society.

In 1881, the building was removed and a foundation was laid for a new church of brick. The cornerstone was laid July 24, 1882, and the new edifice was dedicated on January 30, 1884 at a cost of &dollar;30,000. This Gothic structure had stained glass windows and a ninety-six foot spire. The congregation met in this new house of worship under the leadership of nine ministers. In 1895 a Young People's Society was organized with 102 members. The men of the church organized a Brotherhood in 1907.

The Reverend William Shaw came to the First Baptist Church in January, 1925, as a young, ambitious and dedicated minister. The building located on the comer of Washington and Cross Street served as the house of worship for the Baptists until the morning of Friday, February 19, 1937, when the church burned beyond any possible use. The church was across the street from the city fire department. The fire is believed to have started in the basement and burned for a considerable time before a passerby stopped at the fire department to make them aware of the fire.

A congregational meeting was held on the evening of February 20, 1937, at the parsonage located at 207 N. Washington Street. The first problem discussed was where the church should meet until a building could be provided. Real Christian concern was shown in the city for the Baptists. Many places for meetings were offered, such as the Masonic Temple, Cleary College, Moore Funeral Home, and nearly every church in the city. It was decided to accept the offer of the Presbyterians, and a program was planned so that the two churches could carry on their programs by alternating services. It was decided not to rebuild on the same site. The property was sold and the Geer Funeral Home was built there, now known as the Janowiak Funeral Home.

Plans for rebuilding started immediately and on Labor Day, 1937, members loaded and hauled 83,000 salvaged bricks from the old church to the new location at 1110 West Cross Street. Every conceivable idea was used to raise money for financing the building. They had tag-day sales, bake sales, dinners, old newspaper collections and many other schemes for raising money. Less than one third of the value of the burned church was covered by insurance, but with that money, the land at 1110 West Cross Street was purchased for the site of the new and now current First Baptist Church of Ypsilanti. The site was chosen after studying maps of church membership, as well as looking at the direction in which the city of Ypsilanti was growing. The Normal Park neighborhood was developing, and this residential area with wide-open green spaces provided an open atmosphere that the previous location did not.

The new church was dedicated October 13, 1938. The mortgage was burned November 22, 1940. Historical reminders from the previous church are located throughout the 1938 structure. Salvaged bricks literally formed the walls of the new structure, while other items salvaged are more decorative in nature. Pews in the balcony were preserved from the burned Gothic structure. The 1882 cornerstone is embedded in a stairwell wall. A soot-covered beam is now used as a fireplace mantle in the basement. A marble top buffet was recovered, as was the hymnal and attendance registry. The picture of Christ at the front of the sanctuary was also an item that was not destroyed by the 1937 fire, and has become a focal point of the church as well.

The interior appearance of the current church, adorned yet simple, followed a movement in the non-liturgical churches of the early 10th century. The belief was that a church should be significant unto itself and not resemble other structures, symbolizing the significance religion should play in life. In order to prevent exhibitionism on the part of the choir or worship leaders, the seats for the choir and clergy located in the chancel are divided by a central aisle, with the choir in two sections facing each other and not the congregation. This allows the congregation to direct their worship and praise to the altar, located in the center of the aisle, and not to the people conducting the service. Also significant is the unobstructed central aisle that leads to the altar. The lack of an obstructing bar symbolizes the Christian way to God-unobstructed and open to all.

In the mid-1950s, an educational unit addition to the west of the original structure was added. This three story wing cost &dollar;100,000. An office and preschool wing was added in 1970 to complete the present structure.

During the forty years that Rev. William Shaw served as pastor, 1925–1965, he was instrumental in starting the Willow Run Community Baptist Church, now known as the Immanuel Baptist Church at 1565 East Forest Avenue in the Willow Run area. He also helped to start the Grove Road Baptist Church. This church later merged with the First Baptist Church and the property sold to a church of another denomination. Financial help and moral support were given to struggling new churches in Rawsonville, Saline, and Chilson Hills in Ann Arbor, along with the Metropolitan Baptist Church here in Ypsilanti. The church has also had an outreach program for many years with college students at Michigan State Normal College now known as Eastern Michigan University.

For almost thirty years, the church has presented the Living Nativity for three evenings at Christmas time. The church continues its service of ministry with the Interfaith Hospitality Network, mission trips, Christmas baskets, social concern fund and monthly offerings to support local organizations.