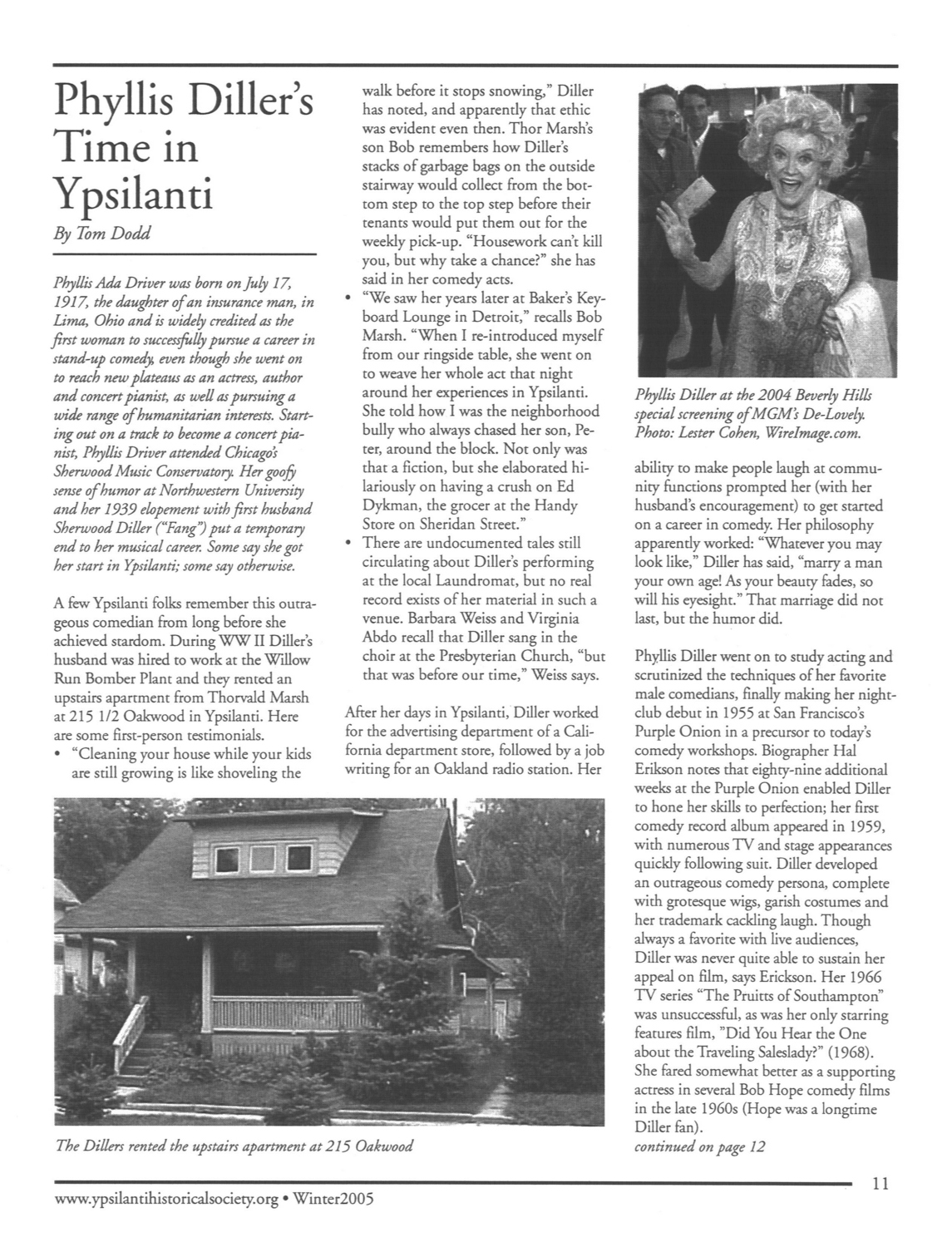 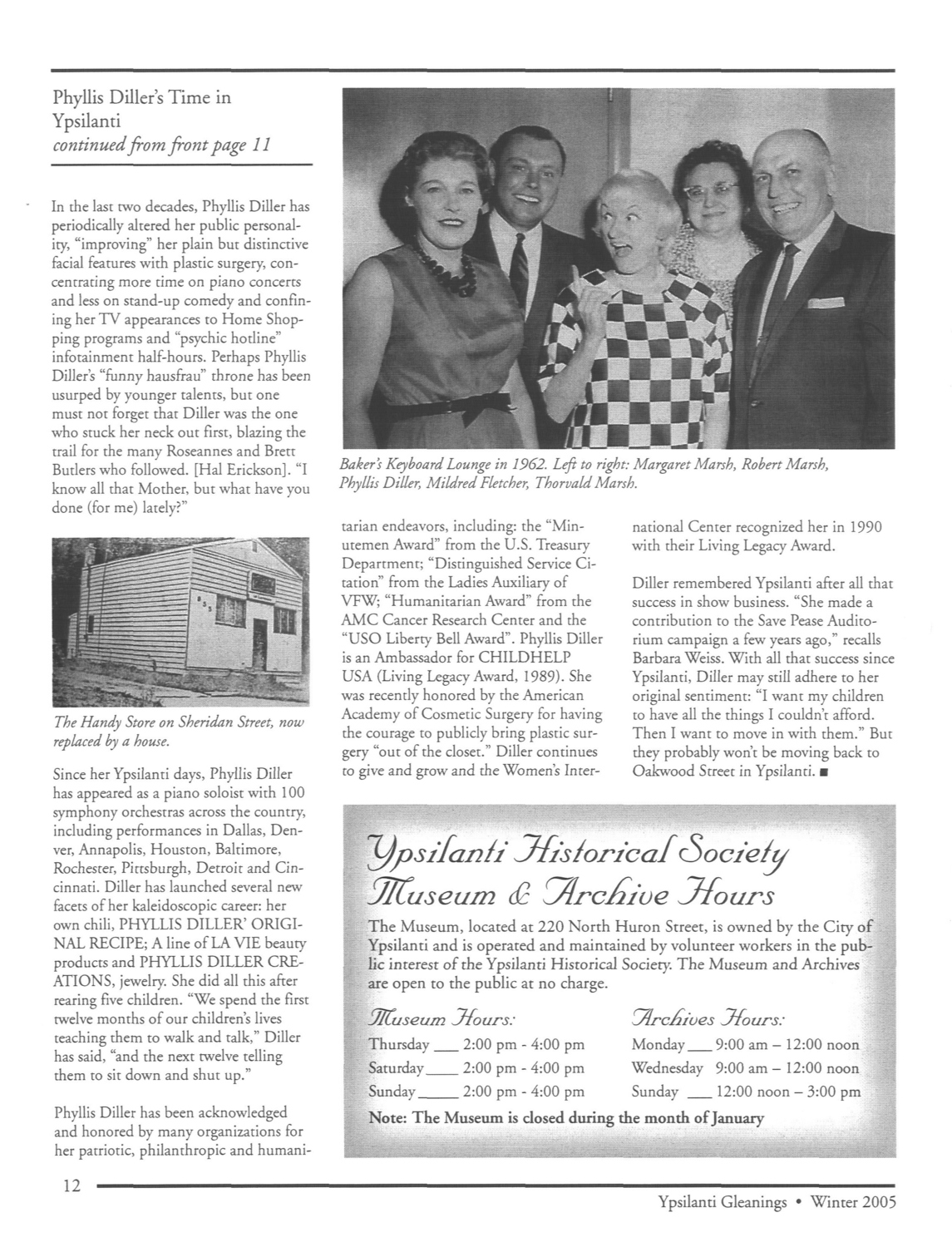 Phyllis Ada Driver was born on July 17, 1917, the daughter of an insurance man, in Lima, Ohio and is widely credited as the first woman to successfully pursue a career in stand-up comedy, even though she went on to reach new plateaus as an actress, author and concert pianist, as well as pursuing a wide range of humanitarian interests. Starting out on a track to become a concert pianist, Phyllis Driver attended Chicago's Sherwood Music Conservatory. Her goofy sense of humor at Northwestern University and her 1939 elopement with first husband Sherwood Diller (“Fang”) put a temporary end to her musical career. Some say she got her start in Ypsilanti; some say otherwise.

A few Ypsilanti folks remember this outrageous comedian from long before she achieved stardom. During WW II Diller's husband was hired to work at the Willow Run Bomber Plant and they rented an upstairs apartment from Thorvald Marsh at 215 1/2 Oakwood in Ypsilanti. Here are some first-person testimonials.

• “Cleaning your house while your kids are still growing is like shoveling the walk before it stops snowing,” Diller has noted, and apparently that ethic was evident even then. Thor Marsh's son Bob remembers how Diller's stacks of garbage bags on the outside stairway would collect from the bottom step to the top step before their tenants would put them out for the weekly pick-up. “Housework can't kill you, but why take a chance?” she has said in her comedy acts.

• “We saw her years later at Baker's Keyboard Lounge in Detroit,” recalls Bob Marsh. “When I re-introduced myself from our ringside table, she went on to weave her whole act that night around her experiences in Ypsilanti. She told how I was the neighborhood bully who always chased her son, Peter, around the block. Not only was that a fiction, but she elaborated hilariously on having a crush on Ed Dykman, the grocer at the Handy Store on Sheridan Street.”

• There are undocumented tales still circulating about Diller's performing at the local Laundromat, but no real record exists of her material in such a venue. Barbara Weiss and Virginia Abdo recall that Diller sang in the choir at the Presbyterian Church, “but that was before our time,” Weiss says.

After her days in Ypsilanti, Diller worked for the advertising department of a California department store, followed by a job writing for an Oakland radio station. Her ability to make people laugh at community functions prompted her (with her husband's encouragement) to get started on a career in comedy. Her philosophy apparently worked: “Whatever you may look like,” Diller has said, “marry a man your own age! As your beauty fades, so will his eyesight.” That marriage did not last, but the humor did.

The Dillers rented the upstairs apartment at 215 Oakwood

Phyllis Diller went on to study acting and scrutinized the techniques of her favorite male comedians, finally making her nightclub debut in 1955 at San Francisco's Purple Onion in a precursor to today's comedy workshops. Biographer Hal Erikson notes that eighty-nine additional weeks at the Purple Onion enabled Diller to hone her skills to perfection; her first comedy record album appeared in 1959, with numerous TV and stage appearances quickly following suit. Diller developed an outrageous comedy persona, complete with grotesque wigs, garish costumes and her trademark cackling laugh. Though always a favorite with live audiences, Diller was never quite able to sustain her appeal on film, says Erickson. Her 1966 TV series “The Pruitts of Southampton” was unsuccessful, as was her only starring features film, “Did You Hear the One about the Traveling Saleslady?” (1968). She fared somewhat better as a supporting actress in several Bob Hope comedy films in the late 1960s (Hope was a longtime Diller fan).

In the last two decades, Phyllis Diller has periodically altered her public personality, “improving” her plain but distinctive facial features with plastic surgery, concentrating more time on piano concerts and less on stand-up comedy and confining her TV appearances to Home Shopping programs and “psychic hotline” infotainment half-hours. Perhaps Phyllis Diller's “funny hausfrau” throne has been usurped by younger talents, but one must not forget that Diller was the one who stuck her neck out first, blazing the trail for the many Roseannes and Brett Butlers who followed. [Hal Erickson]. “I know all that Mother, but what have you done (for me) lately?”

The Handy Store on Sheridan Street, now replaced by a house.

Since her Ypsilanti days, Phyllis Diller has appeared as a piano soloist with 100 symphony orchestras across the country, including performances in Dallas, Denver, Annapolis, Houston, Baltimore, Rochester, Pittsburgh, Detroit and Cincinnati. Diller has launched several new facets of her kaleidoscopic career: her own chili, Phyllis Diller' Original Recipe; A line of La Vie beauty products and Phyllis Diller Creations, jewelry. She did all this after rearing five children. “We spend the first twelve months of our children's lives teaching them to walk and talk,” Diller has said, “and the next twelve telling them to sit down and shut up.”

Phyllis Diller has been acknowledged and honored by many organizations for her patriotic, philanthropic and humanitarian endeavors, including: the “Minutemen Award” from the U.S. Treasury Department; “Distinguished Service Citation” from the Ladies Auxiliary of VFW; “Humanitarian Award” from the AMC Cancer Research Center and the “USO Liberty Bell Award”. Phyllis Diller is an Ambassador for Childhelp USA (Living Legacy Award, 1989). She was recently honored by the American Academy of Cosmetic Surgery for having the courage to publicly bring plastic surgery “out of the closet.” Diller continues to give and grow and the Women's International Center recognized her in 1990 with their Living Legacy Award.

Diller remembered Ypsilanti after all that success in show business. “She made a contribution to the Save Pease Auditorium campaign a few years ago,” recalls Barbara Weiss. With all that success since Ypsilanti, Diller may still adhere to her original sentiment: “I want my children to have all the things I couldn't afford. Then I want to move in with them.” But they probably won't be moving back to Oakwood Street in Ypsilanti.