Interesting Facts about the Prohibition Era 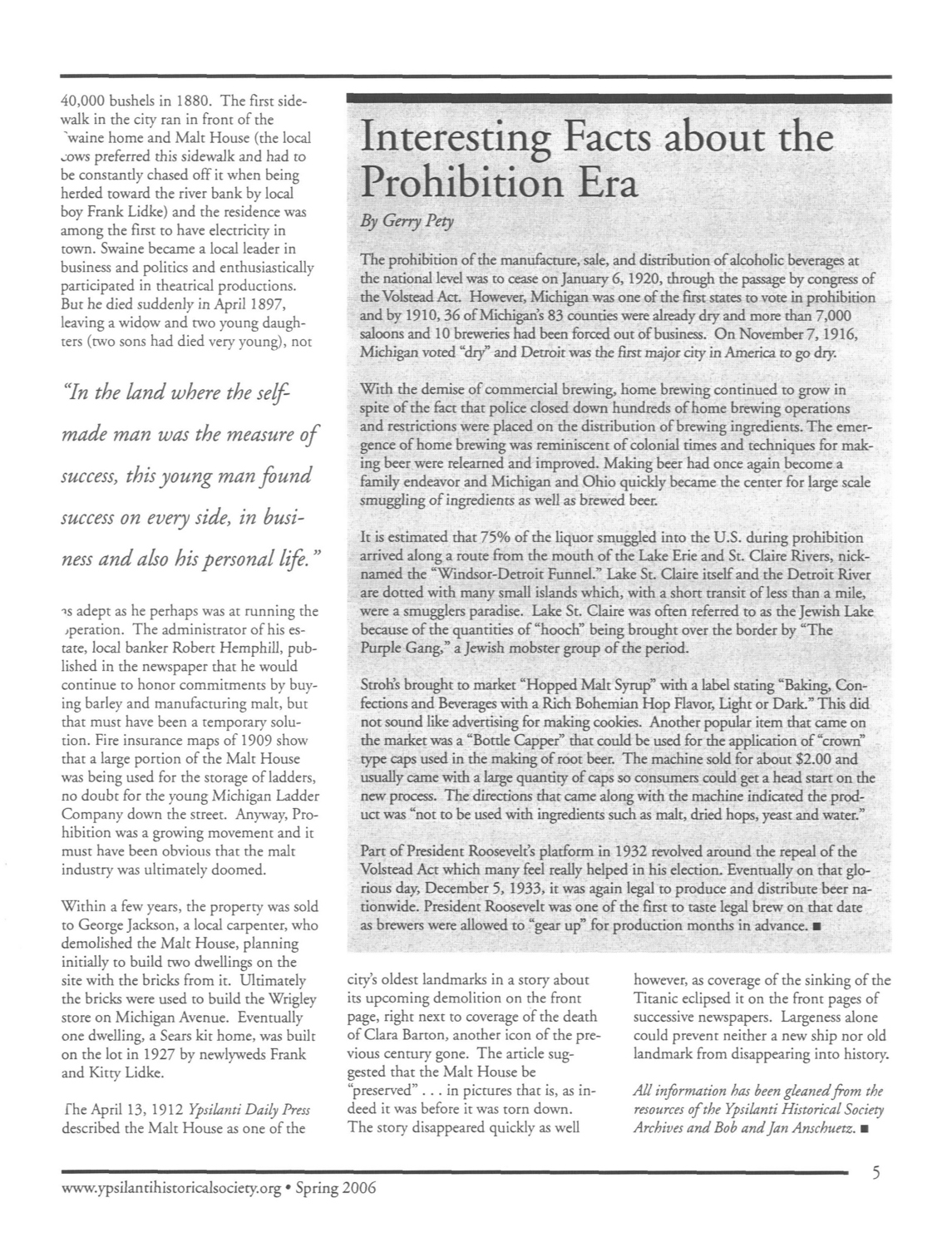 The prohibition of the manufacture, sale, and distribution of alcoholic beverages at the national level was to cease on January 6, 1920, through the passage by congress of the Volstead Act. However, Michigan was one of the first states to vote in prohibition and by 1910, 36 of Michigan's 83 counties were already dry and more than 7,000 saloons and 10 breweries had been forced out of business. On November 7, 1916, Michigan voted “dry” and Detroit was the first major city in America to go dry.

With the demise of commercial brewing, home brewing continued to grow in spite of the fact that police closed down hundreds of home brewing operations and restrictions were placed on the distribution of brewing ingredients. The emergence of home brewing was reminiscent of colonial times and techniques for making beer were relearned and improved. Making beer had once again become a family endeavor and Michigan and Ohio quickly became the center for large scale smuggling of ingredients as well as brewed beer.

It is estimated that 75% of the liquor smuggled into the U.S. during prohibition arrived along a route from the mouth of the Lake Erie and St. Claire Rivers, nick-named the “Windsor-Detroit Funnel.” Lake St. Claire itself and the Detroit River are dotted with many small islands which, with a short transit of less than a mile, were a smugglers paradise. Lake St. Claire was often referred to as the Jewish Lake because of the quantities of “hooch” being brought over the border by “The Purple Gang,” a Jewish mobster group of the period.

Stroh's brought to market “Hopped Malt Syrup” with a label stating “Baking, Confections and Beverages with a Rich Bohemian Hop Flavor, Light or Dark.” This did not sound like advertising for making cookies. Another popular item that came on the market was a “Bottle Capper” that could be used for the application of “crown” type caps used in the making of root beer. The machine sold for about &dollar;2.00 and usually came with a large quantity of caps so consumers could get a head start on the new process. The directions that came along with the machine indicated the product was “not to be used with ingredients such as malt, dried hops, yeast and water.”

Part of President Roosevelt's platform in 1932 revolved around the repeal of the Volstead Act which many feel really helped in his election. Eventually on that glorious day, December 5, 1933, it was again legal to produce and distribute beer nationwide. President Roosevelt was one of the first to taste legal brew on that date as brewers were allowed to “gear up” for production months in advance.