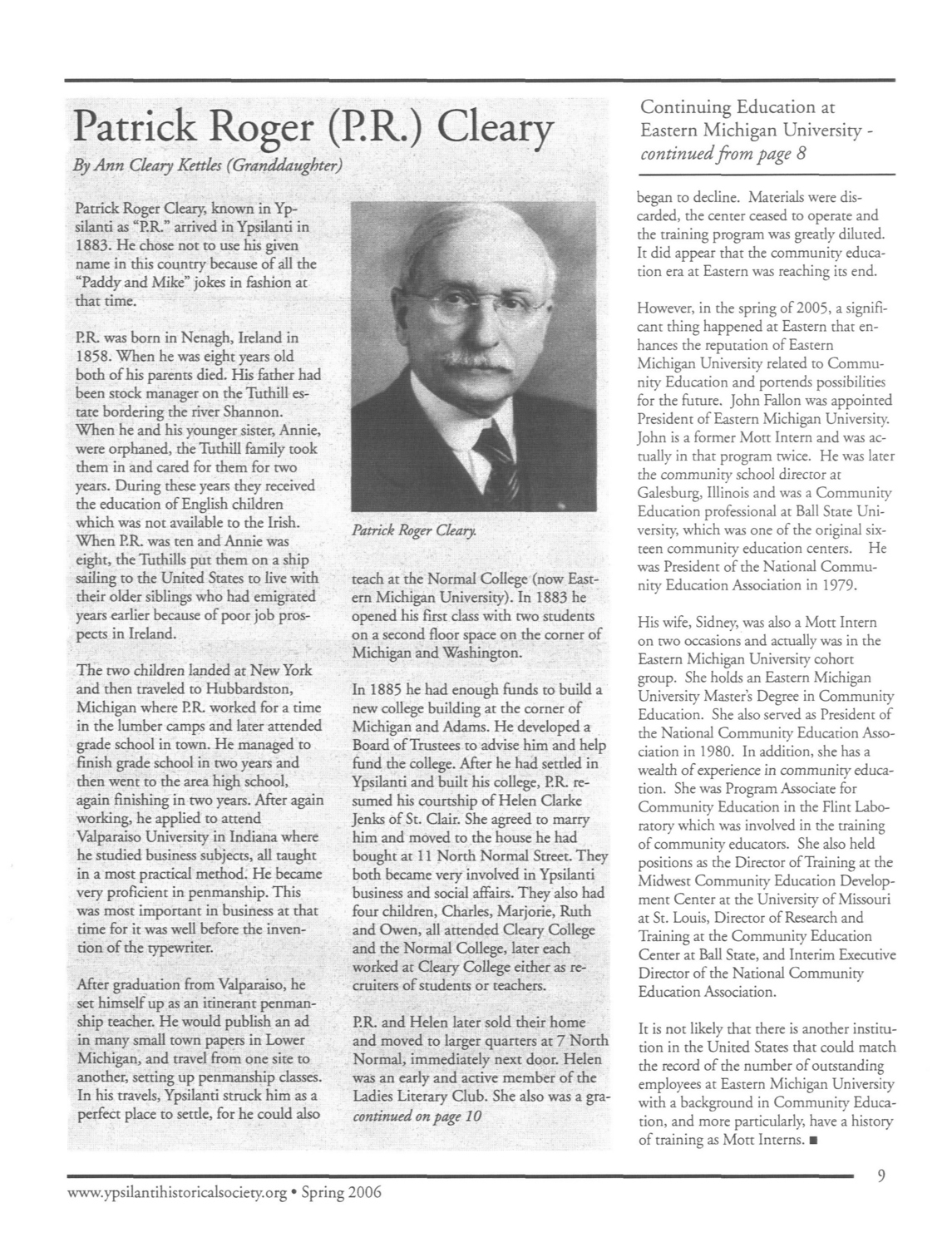 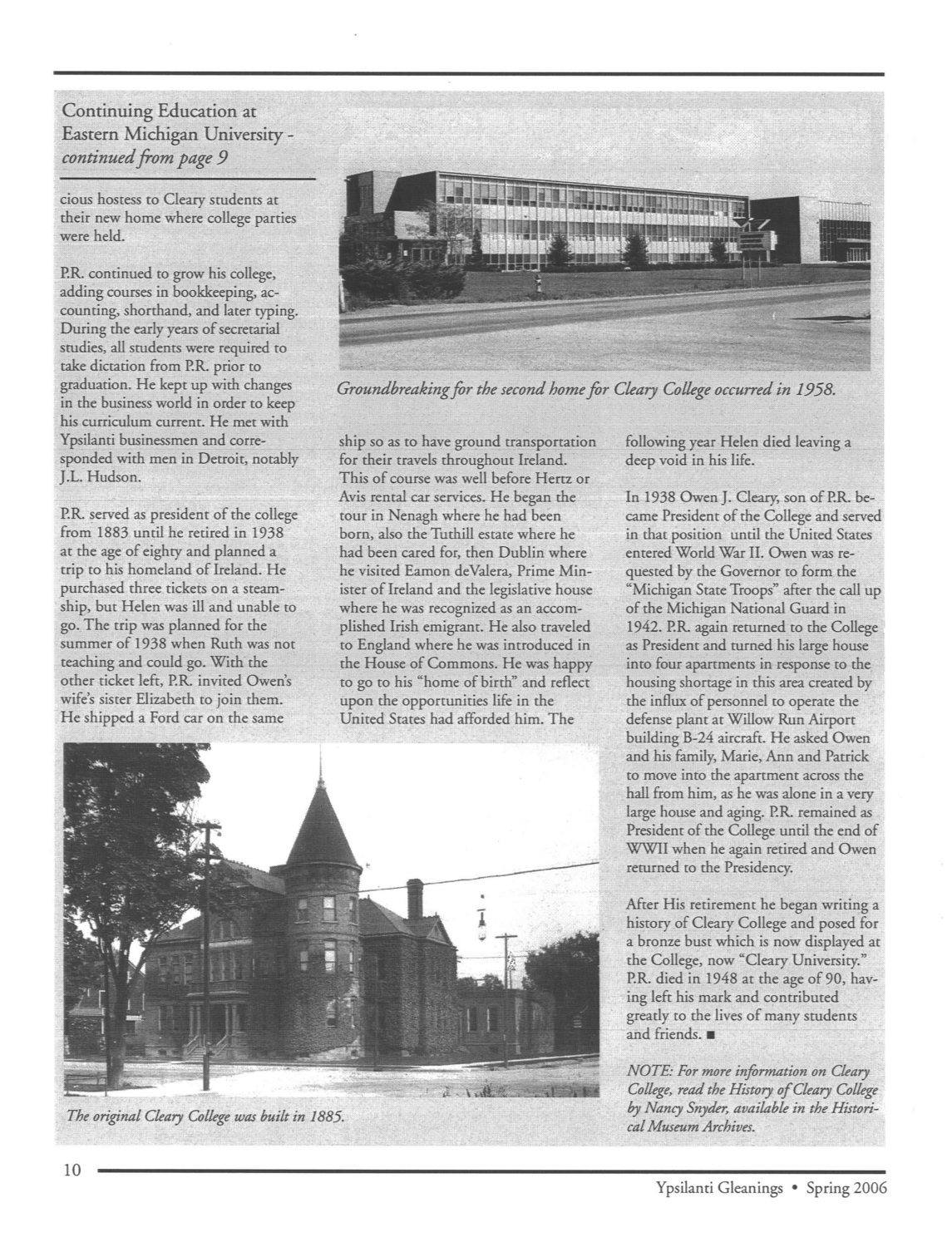 Patrick Roger Cleary, known in Ypsilanti as “P.R.” arrived in Ypsilanti in 1883. He chose not to use his given name in this country because of all the “Paddy and Mike” jokes in fashion at that time.

P.R. was born in Nenagh, Ireland in 1858. When he was eight years old both of his parents died. His father had been stock manager on the Tuthill estate bordering the river Shannon. When he and his younger sister, Annie, were orphaned, the Tuthill family took them in and cared for them for two years. During these years they received the education of English children which was not available to the Irish. When P.R. was ten and Annie was eight, the Tuthills put them on a ship sailing to the United States to live with their older siblings who had emigrated years earlier because of poor job prospects in Ireland.

The two children landed at New York and then traveled to Hubbardston, Michigan where P.R. worked for a time in the lumber camps and later attended grade school in town. He managed to finish grade school in two years and then went to the area high school, again finishing in two years. After again working, he applied to attend Valparaiso University in Indiana where he studied business subjects, all taught in a most practical method. He became very proficient in penmanship. This was most important in business at that time for it was well before the invention of the typewriter.

After graduation from Valparaiso, he set himself up as an itinerant penmanship teacher. He would publish an ad in many small town papers in Lower Michigan, and travel from one site to another, setting up penmanship classes. In his travels, Ypsilanti struck him as a perfect place to settle, for he could also teach at the Normal College (now Eastern Michigan University). In 1883 he opened his first class with two students on a second floor space on the corner of Michigan and Washington.

In 1885 he had enough funds to build a new college building at the corner of Michigan and Adams. He developed a Board of Trustees to advise him and help fund the college. After he had settled in Ypsilanti and built his college, P.R. resumed his courtship of Helen Clarke Jenks of St. Clair. She agreed to marry him and moved to the house he had bought at 11 North Normal Street. They both became very involved in Ypsilanti business and social affairs. They also had four children, Charles, Marjorie, Ruth and Owen, all attended Cleary College and the Normal College, later each worked at Cleary College either as recruiters of students or teachers.

P.R. and Helen later sold their home and moved to larger quarters at 7 North Normal, immediately next door. Helen was an early and active member of the Ladies Literary Club. She also was a gracious hostess to Cleary students at their new home where college parties were held.

P.R. continued to grow his college, adding courses in bookkeeping, accounting, shorthand, and later typing. During the early years of secretarial studies, all students were required to take dictation from P.R. prior to graduation. He kept up with changes in the business world in order to keep his curriculum current. He met with Ypsilanti businessmen and corresponded with men in Detroit, notably J.L. Hudson.

P.R. served as president of the college from 1883 until he retired in 1938 at the age of eighty and planned a trip to his homeland of Ireland. He purchased three tickets on a steamship, but Helen was ill and unable to go. The trip was planned for the summer of 1938 when Ruth was not teaching and could go. With the other ticket left, P.R. invited Owen's wife's sister Elizabeth to join them. He shipped a Ford car on the same ship so as to have ground transportation for their travels throughout Ireland. This of course was well before Hertz or Avis rental car services. He began the tour in Nenagh where he had been born, also the Tuthill estate where he had been cared for, then Dublin where he visited Eamon deValera, Prime Minister of Ireland and the legislative house where he was recognized as an accomplished Irish emigrant. He also traveled to England where he was introduced in the House of Commons. He was happy to go to his “home of birth” and reflect upon the opportunities life in the United States had afforded him. The following year Helen died leaving a deep void in his life.

In 1938 Owen J. Cleary, son of P.R. became President of the College and served in that position until the United States entered World War II. Owen was requested by the Governor to form the “Michigan State Troops” after the call up of the Michigan National Guard in 1942. P.R. again returned to the College as President and turned his large house into four apartments in response to the housing shortage in this area created by the influx of personnel to operate the defense plant at Willow Run Airport building B-24 aircraft. He asked Owen and his family, Marie, Ann and Patrick to move into the apartment across the hall from him, as he was alone in a very large house and aging. P.R. remained as President of the College until the end of WWII when he again retired and Owen returned to the Presidency.

After His retirement he began writing a history of Cleary College and posed for a bronze bust which is now displayed at the College, now “Cleary University.” P.R. died in 1948 at the age of 90, having left his mark and contributed greatly to the lives of many students and friends.