Ypsilanti Tot Makes a "Friend" of His Hero 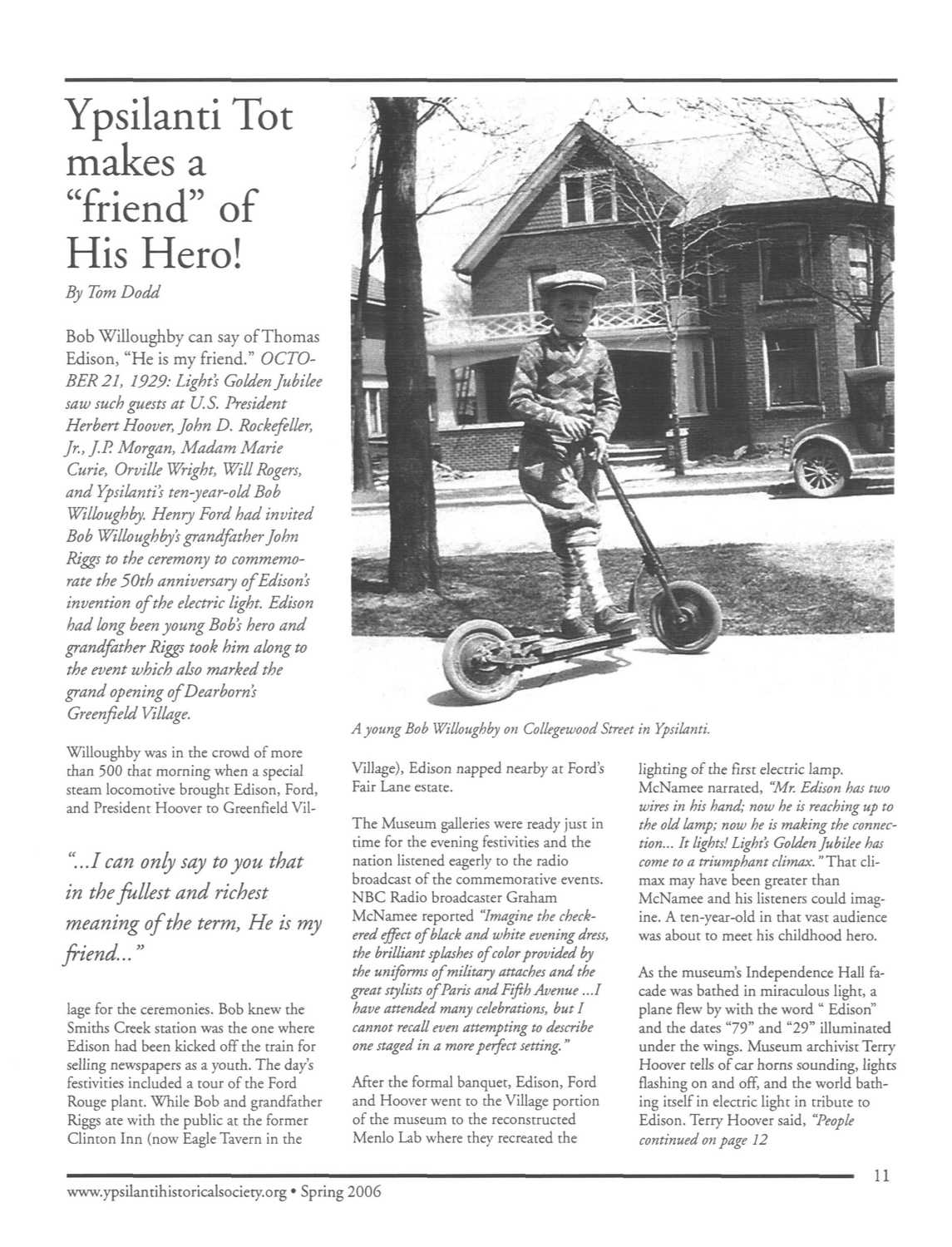 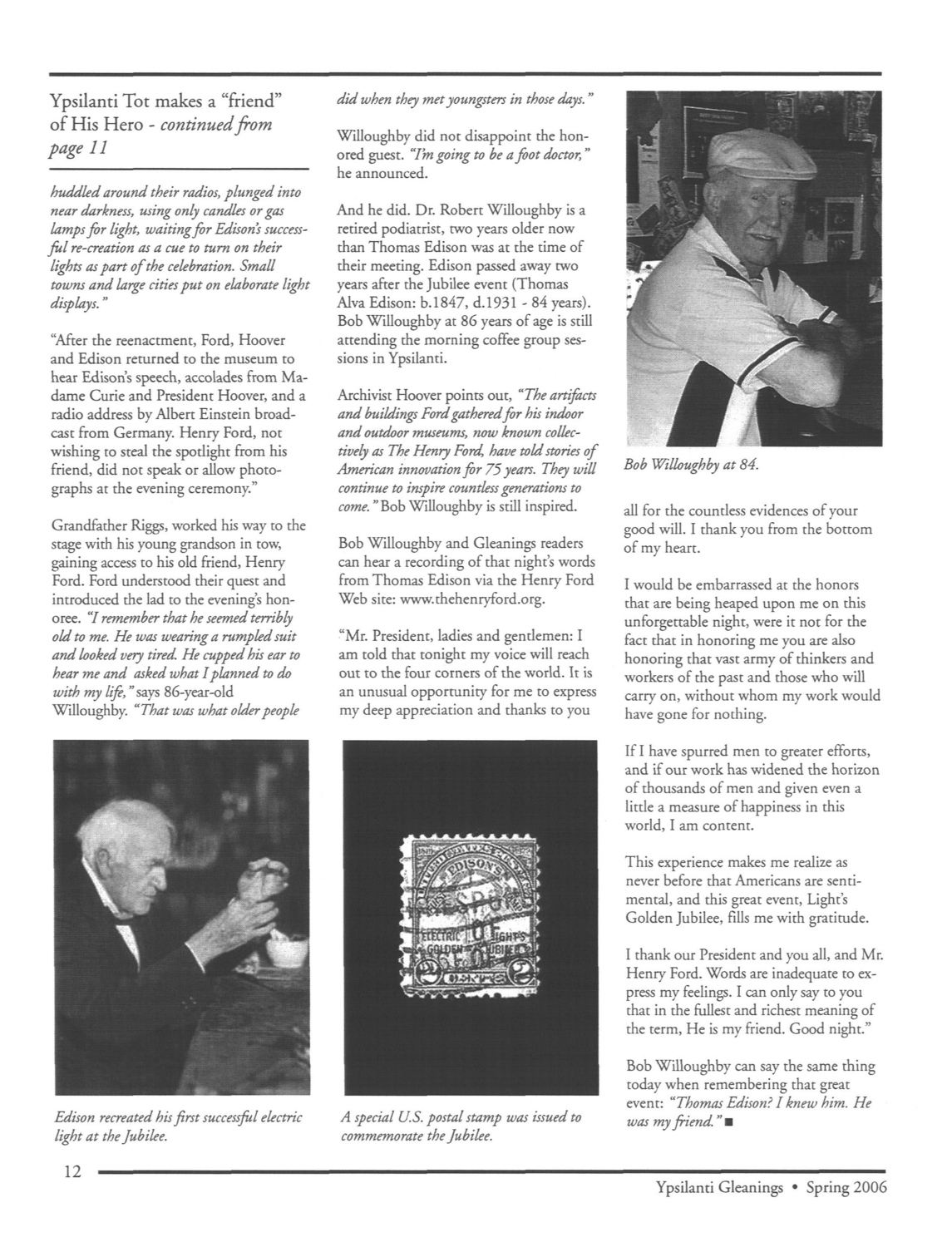 Willoughby was in the crowd of more than 500 that morning when a special steam locomotive brought Edison, Ford, and President Hoover to Greenfield Village for the ceremonies. Bob knew the Smiths Creek station was the one where Edison had been kicked off the train for selling newspapers as a youth. The day's festivities included a tour of the Ford Rouge plant. While Bob and grandfather Riggs are with the public at the former Clinton Inn (now Eagle Tavern in the Village), Edison napped nearby at Ford's Fair Lane estate.

The Museum galleries were ready just in time for the evening festivities and the nation listened eagerly to the radio broadcast of the commemorative events. NBC Radio broadcaster Graham McNamee reported “Imagine the checkered effect of black and white evening dress, the brilliant splashes of color provided by the uniforms of military attaches and the great stylists of Paris and Fifth Avenue… I have attended many celebrations, but I cannot recall even attempting to describe one staged in a more perfect setting.”

After the formal banquet, Edison, Ford and Hoover went to the Village portion of the museum to the reconstructed Menlo Lab where they recreated the lighting of the first electric lamp.

McNamee narrated, “Mr. Edison has two wires in his hand; now he is reaching up to the old lamp; now he is making the connection… It lights! Light's Golden Jubilee has come to a triumphant climax.” That climax may have been greater than McNamee and his listeners could imagine. A ten-year-old in that vast audience was about to meet his childhood hero.

As the museum's Independence Hall facade was bathed in miraculous light, a plane flew by with the word “Edison” and the dates “79” and “29” illuminated under the wings. Museum archivist Terry Hoover tells of car horns sounding, lights flashing on and off, and the world bathing itself in electric light in tribute to Edison. Terry Hoover said, “People huddled around their radios, plunged into near darkness, using only candles or gas lamps for light, waiting for Edison's successful re-creation as a cue to turn on their lights as part of the celebration. Small towns and large cities put on elaborate light displays.”

“After the reenactment, Ford, Hoover and Edison returned to the museum to hear Edison's speech, accolades from Madame Curie and President Hoover, and a radio address by Albert Einstein broadcast from Germany. Henry Ford, not wishing to steal the spotlight from his friend, did not speak or allow photographs at the evening ceremony.”

Grandfather Riggs, worked his way to the stage with his young grandson in tow, gaining access to his old friend, Henry Ford. Ford understood their quest and introduced the lad to the evening's honoree. “I remember that he seemed terribly old to me. He was wearing a rumpled suit and looked very tired. He cupped his ear to hear me and asked what I planned to do with my life,” says 86-year-old Willoughby. “That was what older people did when they met youngsters in those days.”

Willoughby did not disappoint the honored guest. “I'm going to be a foot doctor,” he announced.

And he did. Dr. Robert Willoughby is a retired podiatrist, two years older now than Thomas Edison was at the time of their meeting. Edison passed away two years after the Jubilee event (Thomas Alva Edison: b. 1847, d. 1931–84 years). Bob Willoughby at 86 years of age is still attending the morning coffee group sessions in Ypsilanti.

Archivist Hoover points out, “The artifacts and buildings Ford gathered for his indoor and outdoor museums, now known collectively as The Henry Ford, have told stories of American innovation for 75 years. They will continue to inspire countless generations to come.” Bob Willoughby is still inspired.

Bob Willoughby and Gleanings readers can hear a recording of that night's words from Thomas Edison via the Henry Ford Web site: www.thehenryford.org.

“Mr. President, ladies and gentlemen: I am told that tonight my voice will reach out to the four corners of the world. It is an unusual opportunity for me to express my deep appreciation and thanks to you all for the countless evidences of your good will. I thank you from the bottom of my heart.

I would be embarrassed at the honors that are being heaped upon me on this unforgettable night, were it not for the fact that in honoring me you are also honoring that vast army of thinkers and workers of the past and those who will carry on, without whom my work would have gone for nothing.

If I have spurred men to greater efforts, and if our work has widened the horizon of thousands of men and given even a little a measure of happiness in this world, I am content.

This experience makes me realize as never before that Americans are sentimental, and this great event, Light's Golden Jubilee, fills me with gratitude.

I thank our President and you all, and Mr. Henry Ford. Words are inadequate to express my feelings. I can only say to you that in the fullest and richest meaning of the term, He is my friend. Good night.”

Bob Willoughby can say the same thing today when remembering that great event: “Thomas Edison? I knew him. He was my friend.”