Edd Dykman and "The Handy Store!" 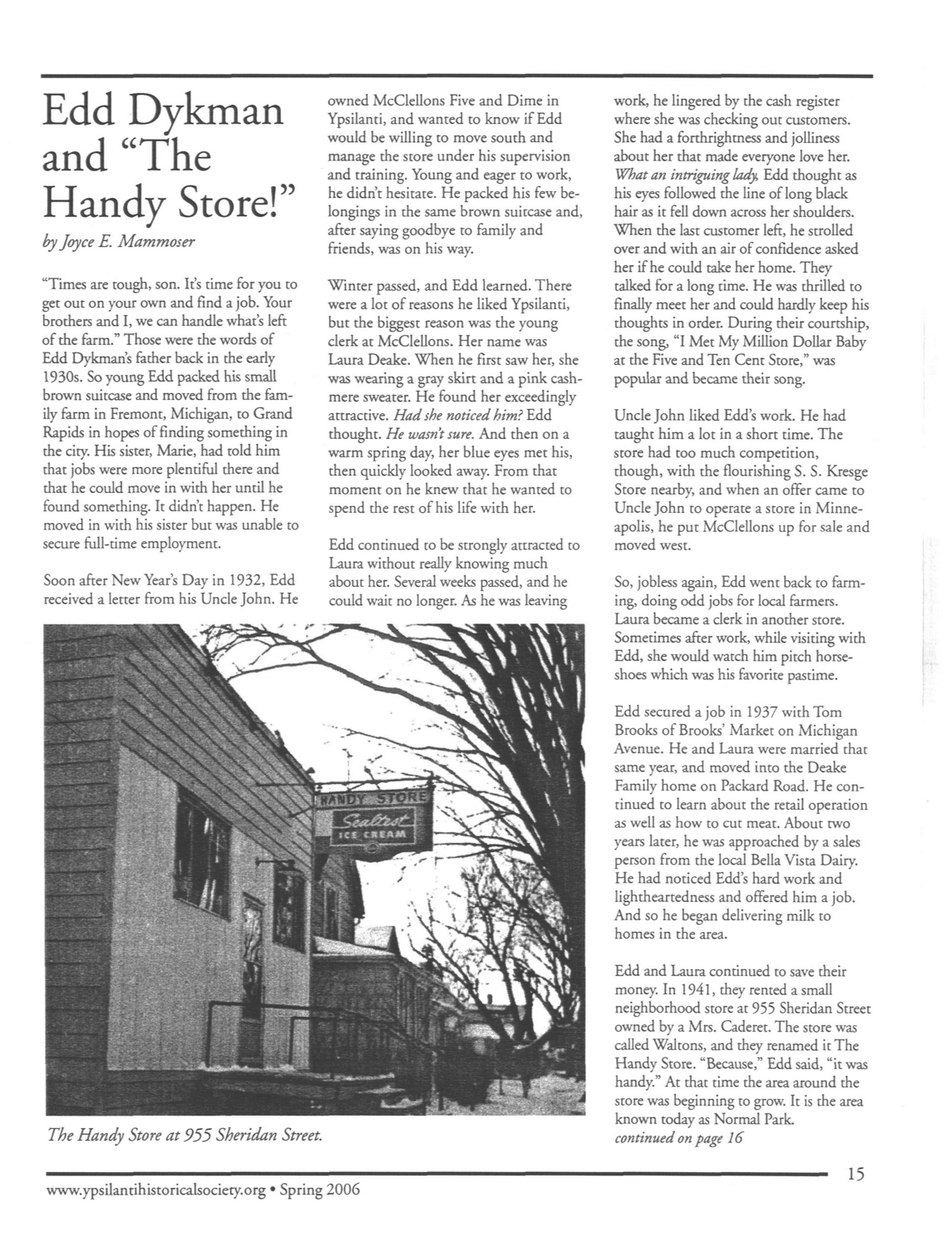 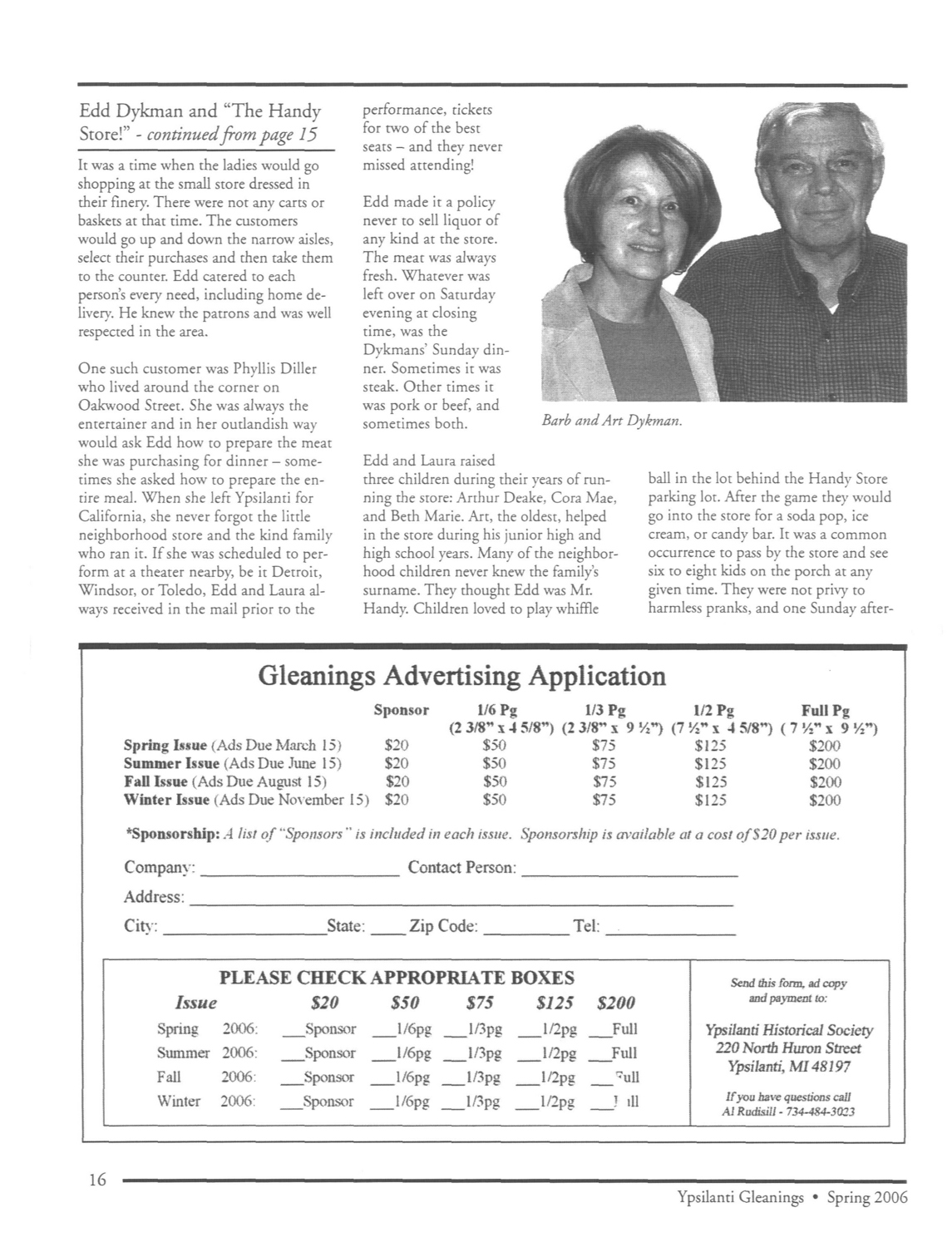 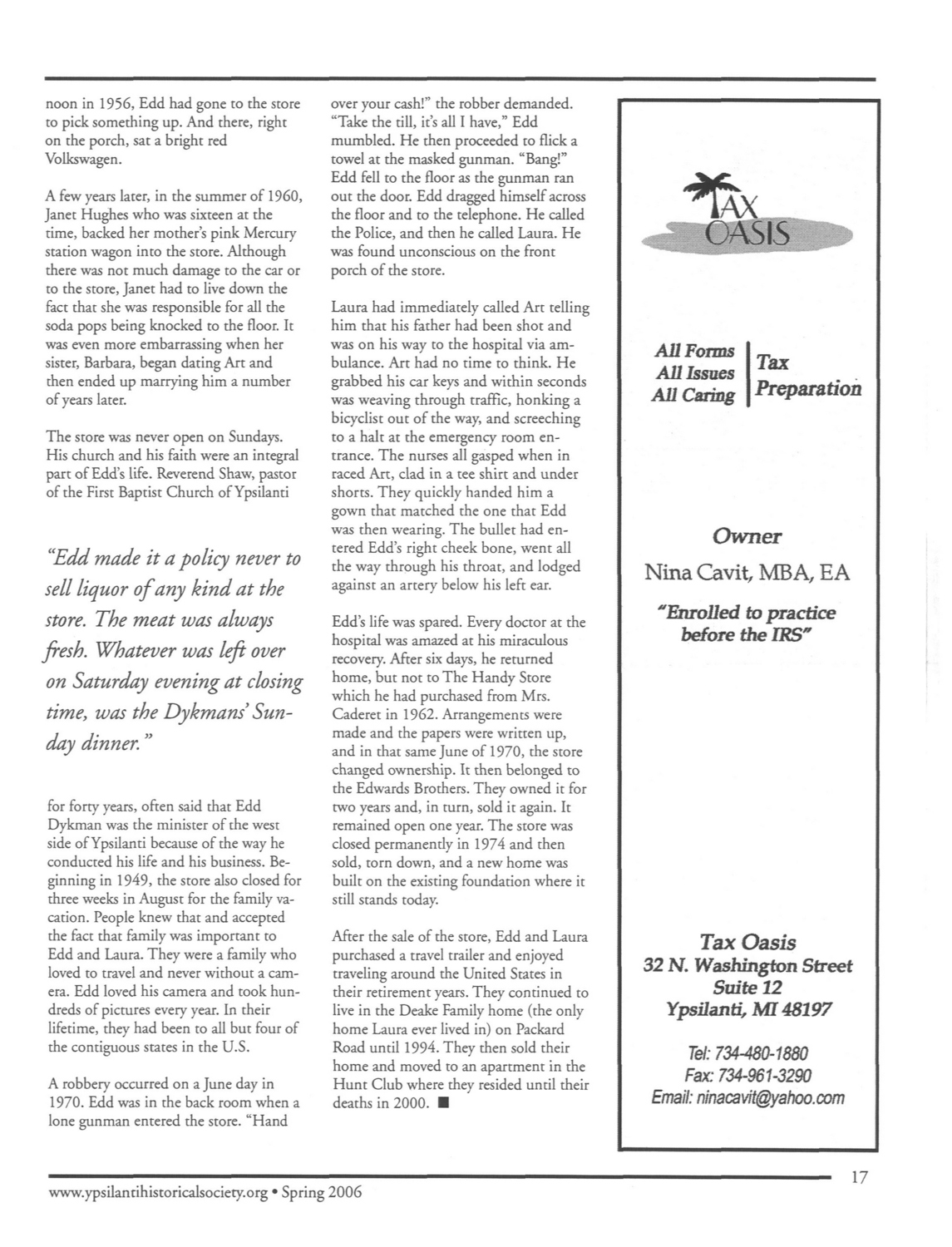 “Times are tough, son. It's time for you to get out on your own and find a job. Your brothers and I, we can handle what's left of the farm.” Those were the words of Edd Dykman's father back in the early 1930s. So young Edd packed his small brown suitcase and moved from the family farm in Fremont, Michigan, to Grand Rapids in hopes of finding something in the city. His sister, Marie, had told him that jobs were more plentiful there and that he could move in with her until he found something. It didn't happen. He moved in with his sister but was unable to secure full-time employment.

Soon after New Year's Day in 1932, Edd received a letter from his Uncle John. He owned McClellons Five and Dime in Ypsilanti, and wanted to know if Edd would be willing to move south and manage the store under his supervision and training. Young and eager to work, he didn't hesitate. He packed his few belongings in the same brown suitcase and, after saying goodbye to family and friends, was on his way.

Winter passed, and Edd learned. There were a lot of reasons he liked Ypsilanti, but the biggest reason was the young clerk at McClellons. Her name was Laura Deake. When he first saw her, she was wearing a gray skirt and a pink cashmere sweater. He found her exceedingly attractive. Had she noticed him? Edd thought. He wasn't sure. And then on a warm spring day, her blue eyes met his, then quickly looked away. From that moment on he knew that he wanted to spend the rest of his life with her.

Edd continued to be strongly attracted to Laura without really knowing much about her. Several weeks passed, and he could wait no longer. As he was leaving work, he lingered by the cash register where she was checking out customers. She had a forthrightness and jolliness about her that made everyone love her. What an intriguing lady, Edd thought as his eyes followed the line of long black hair as it fell down across her shoulders. When the last customer left, he strolled over and with an air of confidence asked her if he could take her home. They talked for a long time. He was thrilled to finally meet her and could hardly keep his thoughts in order. During their courtship, the song, “I Met My Million Dollar Baby at the Five and Ten Cent Store,” was popular and became their song.

Uncle John liked Edd's work. He had taught him a lot in a short time. The store had too much competition, though, with the flourishing S. S. Kresge Store nearby, and when an offer came to Uncle John to operate a store in Minneapolis, he put McClellons up for sale and moved west.

So, jobless again, Edd went back to farming, doing odd jobs for local farmers. Laura became a clerk in another store. Sometimes after work, while visiting with Edd, she would watch him pitch horse-shoes which was his favorite pastime.

Edd secured a job in 1937 with Tom Brooks of Brooks' Market on Michigan Avenue. He and Laura were married that same year, and moved into the Deake Family home on Packard Road. He continued to learn about the retail operation as well as how to cut meat. About two years later, he was approached by a sales person from the local Bella Vista Dairy. He had noticed Edd's hard work and lightheartedness and offered him a job. And so he began delivering milk to homes in the area.

Edd and Laura continued to save their money. In 1941, they rented a small neighborhood store at 955 Sheridan Street owned by a Mrs. Caderet. The store was called Waltons, and they renamed it The Handy Store. “Because,” Edd said, “it was handy.” At that time the area around the store was beginning to grow. It is the area known today as Normal Park.

It was a time when the ladies would go shopping at the small store dressed in their finery. There were not any carts or baskets at that time. The customers would go up and down the narrow aisles, select their purchases and then take them to the counter. Edd catered to each person's every need, including home delivery. He knew the patrons and was well respected in the area.

One such customer was Phyllis Diller who lived around the corner on Oakwood Street. She was always the entertainer and in her outlandish way would ask Edd how to prepare the meat she was purchasing for dinner — sometimes she asked how to prepare the entire meal. When she left Ypsilanti for California, she never forgot the little neighborhood store and the kind family who ran it. If she was scheduled to perform at a theater nearby, be it Detroit, Windsor, or Toledo, Edd and Laura always received in the mail prior to the performance, tickets for two of the best seats — and they never missed attending!

Edd made it a policy never to sell liquor of any kind at the store. The meat was always fresh. Whatever was left over on Saturday evening at closing time, was the Dykmans' Sunday dinner. Sometimes it was steak. Other times it was pork or beef, and sometimes both.

Edd and Laura raised three children during their years of running the store: Arthur Deake, Cora Mae, and Beth Marie. Art, the oldest, helped in the store during his junior high and high school years. Many of the neighborhood children never knew the family's surname. They thought Edd was Mr. Handy. Children loved to play whiffle ball in the lot behind the Handy Store parking lot. After the game they would go into the store for a soda pop, ice cream, or candy bar. It was a common occurrence to pass by the store and see six to eight kids on the porch at any given time. They were not privy to harmless pranks, and one Sunday afternoon noon in 1956, Edd had gone to the store to pick something up. And there, right on the porch, sat a bright red Volkswagen.

A few years later, in the summer of 1960, Janet Hughes who was sixteen at the time, backed her mother's pink Mercury station wagon into the store. Although there was not much damage to the car or to the store, Janet had to live down the fact that she was responsible for all the soda pops being knocked to the floor. It was even more embarrassing when her sister, Barbara, began dating Art and then ended up marrying him a number of years later.

The store was never open on Sundays. His church and his faith were an integral part of Edd's life. Reverend Shaw, pastor of the First Baptist Church of Ypsilanti for forty years, often said that Edd Dykman was the minister of the west side of Ypsilanti because of the way he conducted his life and his business. Beginning in 1949, the store also closed for three weeks in August for the family vacation. People knew that and accepted the fact that family was important to Edd and Laura. They were a family who loved to travel and never without a camera. Edd loved his camera and took hundreds of pictures every year. In their lifetime, they had been to all but four of the contiguous states in the U.S.

A robbery occurred on a June day in 1970. Edd was in the back room when a lone gunman entered the store. “Hand over your cash!” the robber demanded. “Take the till, it's all I have,” Edd mumbled. He then proceeded to flick a towel at the masked gunman. “Bang!” Edd fell to the floor as the gunman ran out the door. Edd dragged himself across the floor and to the telephone. He called the Police, and then he called Laura. He was found unconscious on the front porch of the store.

Laura had immediately called Art telling him that his father had been shot and was on his way to the hospital via ambulance. Art had no time to think. He grabbed his car keys and within seconds was weaving through traffic, honking a bicyclist out of the way, and screeching to a halt at the emergency room entrance. The nurses all gasped when in raced Art, clad in a tee shirt and under shorts. They quickly handed him a gown that matched the one that Edd was then wearing. The bullet had entered Edd's right cheek bone, went all the way through his throat, and lodged against an artery below his left ear.

Edd's life was spared. Every doctor at the hospital was amazed at his miraculous recovery. After six days, he returned home, but not to The Handy Store which he had purchased from Mrs. Caderet in 1962. Arrangements were made and the papers were written up, and in that same June of 1970, the store changed ownership. It then belonged to the Edwards Brothers. They owned it for two years and, in turn, sold it again. It remained open one year. The store was closed permanently in 1974 and then sold, torn down, and a new home was built on the existing foundation where it still stands today.

After the sale of the store, Edd and Laura purchased a travel trailer and enjoyed traveling around the United States in their retirement years. They continued to live in the Deake Family home (the only home Laura ever lived in) on Packard Road until 1994. They then sold their home and moved to an apartment in the Hunt Club where they resided until their deaths in 2000.