Ypsilanti, Basketball's Gateway to the West 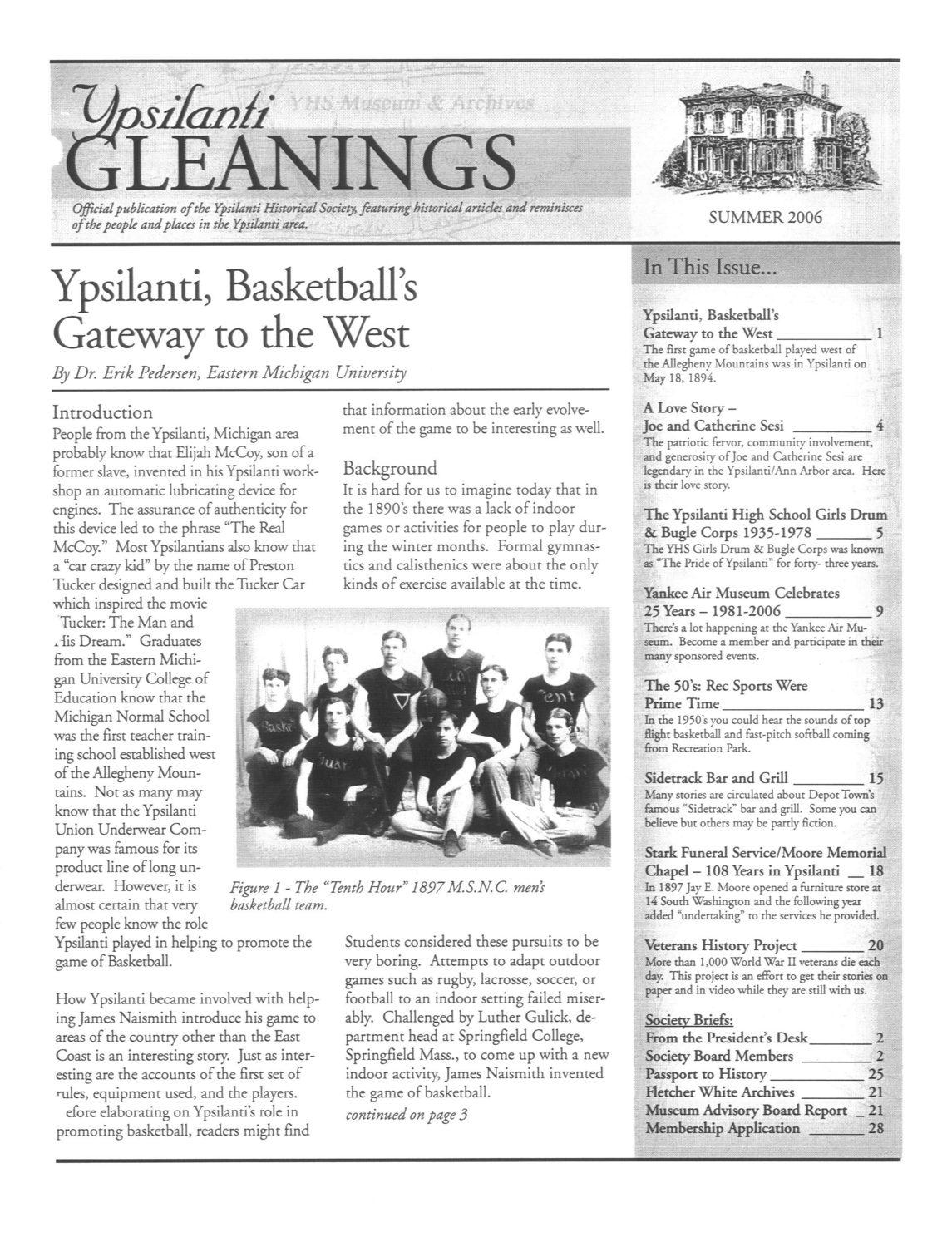 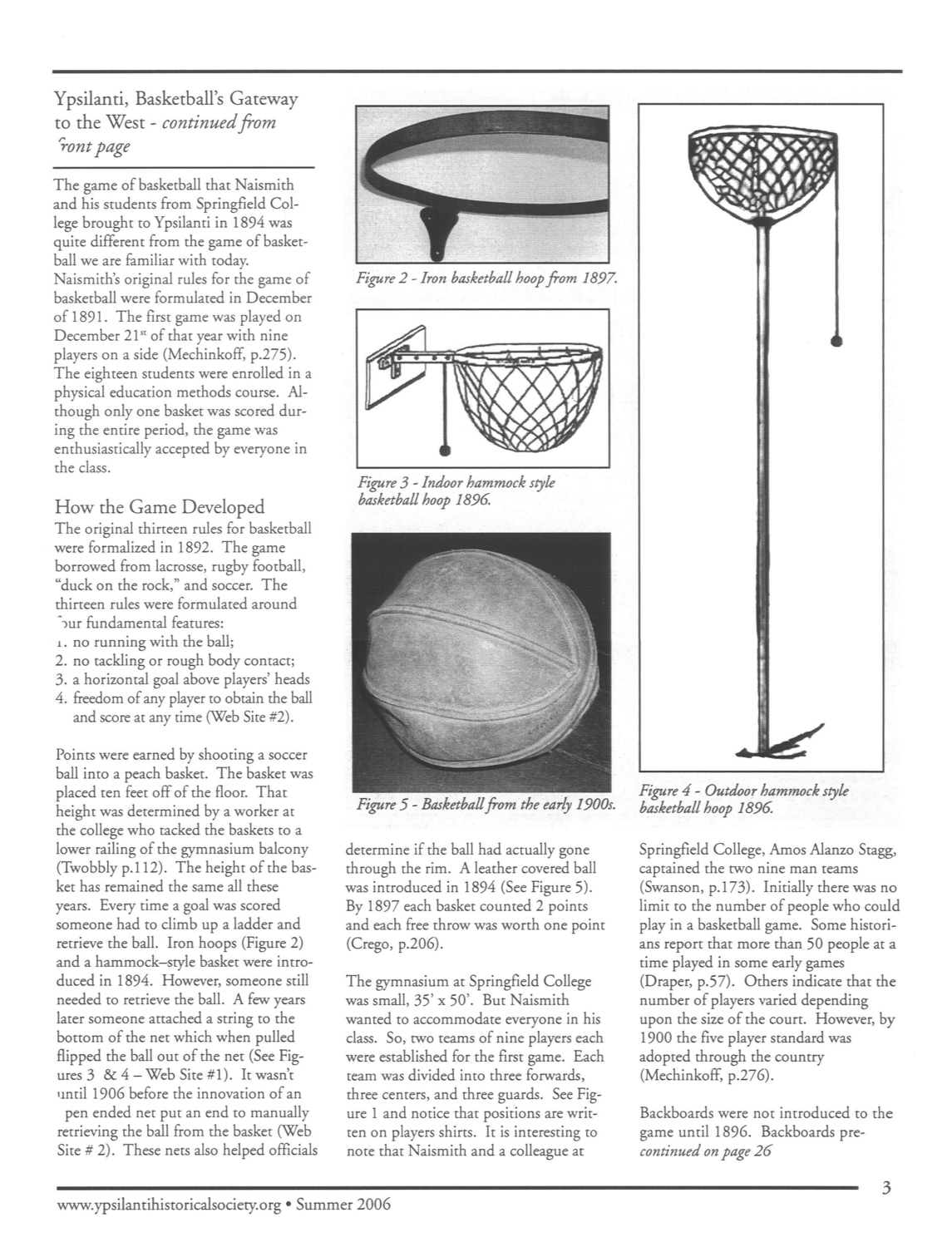 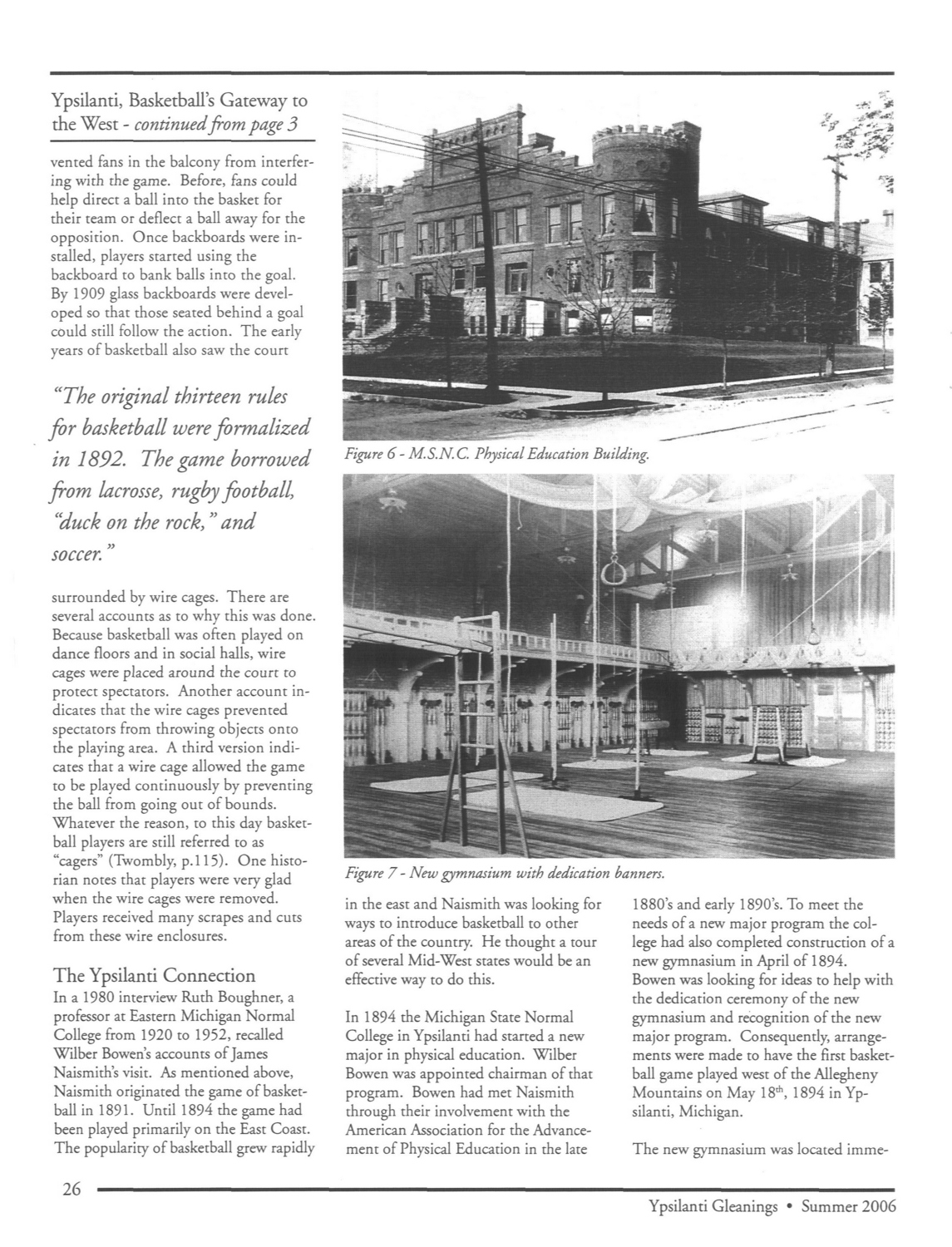 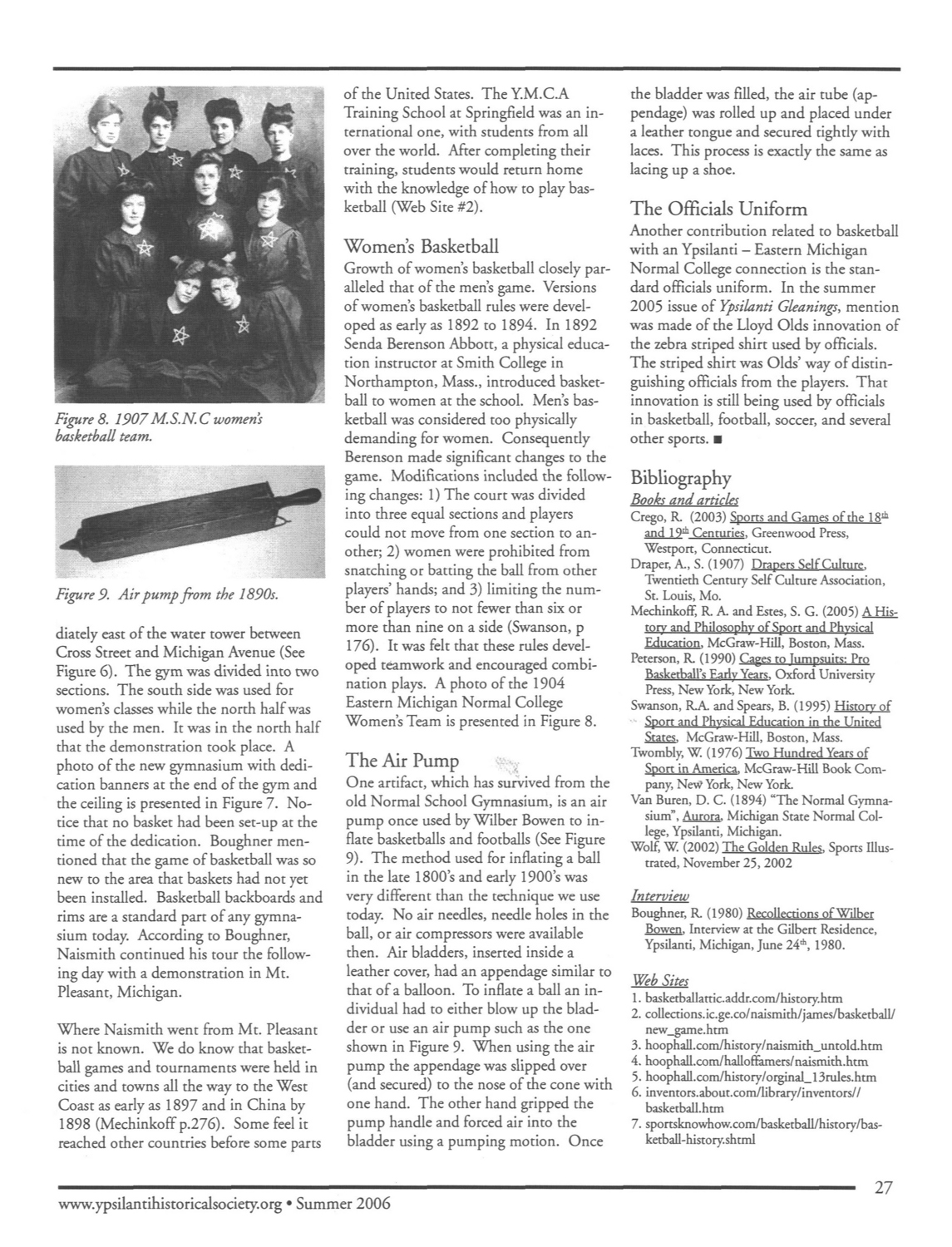 People from the Ypsilanti, Michigan area probably know that Elijah McCoy, son of a former slave, invented in his Ypsilanti workshop an automatic lubricating device for engines. The assurance of authenticity for this device led to the phrase “The Real McCoy.” Most Ypsilantians also know that a “car crazy kid” by the name of Preston Tucker designed and built the Tucker Car which inspired the movie “Tucker: The Man and His Dream.” Graduates from the Eastern Michigan University College of Education know that the Michigan Normal School was the first teacher training school established west of the Allegheny Mountains. Not as many may know that the Ypsilanti Union Underwear Company was famous for its product line of long underwear. However, it is almost certain that very few people know the role Ypsilanti played in helping to promote the game of Basketball.

How Ypsilanti became involved with helping James Naismith introduce his game to areas of the country other than the East Coast is an interesting story. Just as interesting are the accounts of the first set of rules, equipment used, and the players. Before elaborating on Ypsilanti's role in promoting basketball, readers might find that information about the early evolvement of the game to be interesting as well.

It is hard for us to imagine today that in the 1890's there was a lack of indoor games or activities for people to play during the winter months. Formal gymnastics and calisthenics were about the only kinds of exercise available at the time.

Students considered these pursuits to be very boring. Attempts to adapt outdoor games such as rugby, lacrosse, soccer, or football to an indoor setting failed miserably. Challenged by Luther Gulick, department head at Springfield College, Springfield Mass., to come up with a new indoor activity, James Naismith invented the game of basketball.

The game of basketball that Naismith and his students from Springfield College brought to Ypsilanti in 1894 was quite different from the game of basketball we are familiar with today. Naismith's original rules for the game of basketball were formulated in December of 1891. The first game was played on December 21st of that year with nine players on a side (Mechinkoff, p.275). The eighteen students were enrolled in a physical education methods course. Although only one basket was scored during the entire period, the game was enthusiastically accepted by everyone in the class.

How the Game Developed

The original thirteen rules for basketball were formalized in 1892. The game borrowed from lacrosse, rugby football, “duck on the rock,” and soccer. The thirteen rules were formulated around four fundamental features:

1. no running with the ball;
2. no tackling or rough body contact;
3. a horizontal goal above players' heads
4. freedom of any player to obtain the ball and score at any time (Web Site #2).


Points were earned by shooting a soccer ball into a peach basket. The basket was placed ten feet off of the floor. That height was determined by a worker at the college who tacked the baskets to a lower railing of the gymnasium balcony (Twobbly p.112). The height of the basket has remained the same all these years. Every time a goal was scored someone had to climb up a ladder and retrieve the ball. Iron hoops (Figure 2) and a hammock—style basket were introduced in 1894. However, someone still needed to retrieve the ball. A few years later someone attached a string to the bottom of the net which when pulled flipped the ball out of the net (See Figures 3 & 4 — Web Site #1). It wasn't until 1906 before the innovation of an open ended net put an end to manually retrieving the ball from the basket (Web Site #2). These nets also helped officials determine if the ball had actually gone through the rim. A leather covered ball was introduced in 1894 (See Figure 5). By 1897 each basket counted 2 points and each free throw was worth one point (Crego, p.206).

The gymnasium at Springfield College was small, 35 × 50. But Naismith wanted to accommodate everyone in his class. So, two teams of nine players each were established for the first game. Each team was divided into three forwards, three centers, and three guards. See Figure 1 and notice that positions are written on players shirts. It is interesting to note that Naismith and a colleague at Springfield College, Amos Alanzo Stagg, captained the two nine man teams (Swanson, p.173). Initially there was no limit to the number of people who could play in a basketball game. Some historians report that more than 50 people at a time played in some early games (Draper, p.57). Others indicate that the number of players varied depending upon the size of the court. However, by 1900 the five player standard was adopted through the country (Mechinkoff, p.276).

Backboards were not introduced to the game until 1896. Backboards prevented vented fans in the balcony from interfering with the game. Before, fans could help direct a ball into the basket for their team or deflect a ball away for the opposition. Once backboards were installed, players started using the backboard to bank balls into the goal. By 1909 glass backboards were developed so that those seated behind a goal could still follow the action. The early years of basketball also saw the court surrounded by wire cages. There are several accounts as to why this was done. Because basketball was often played on dance floors and in social halls, wire cages were placed around the court to protect spectators. Another account indicates that the wire cages prevented spectators from throwing objects onto the playing area. A third version indicates that a wire cage allowed the game to be played continuously by preventing the ball from going out of bounds. Whatever the reason, to this day basketball players are still referred to as “cagers” (Twombly, p.115). One historian notes that players were very glad when the wire cages were removed. Players received many scrapes and cuts from these wire enclosures.

“The original thirteen rules for basketball were formalized in 1892. The game borrowed from lacrosse, rugby football, “duck on the rock,” and soccer.”

In a 1980 interview Ruth Boughner, a professor at Eastern Michigan Normal College from 1920 to 1952, recalled Wilber Bowen's accounts of James Naismith's visit. As mentioned above, Naismith originated the game of basketball in 1891. Until 1894 the game had been played primarily on the East Coast. The popularity of basketball grew rapidly in the east and Naismith was looking for ways to introduce basketball to other areas of the country. He thought a tour of several Mid-West states would be an

In 1894 the Michigan State Normal College in Ypsilanti had started a new major in physical education. Wilber Bowen was appointed chairman of that program. Bowen had met Naismith through their involvement with the American Association for the Advancement of Physical Education in the late 1880's and early 1890's. To meet the needs of a new major program the college had also completed construction of a new gymnasium in April of 1894. Bowen was looking for ideas to help with the dedication ceremony of the new gymnasium and recognition of the new major program. Consequently, arrangements were made to have the first basketball game played west of the Allegheny Mountains on May 18th, 1894 in Ypsilanti, Michigan.

The new gymnasium was located immediately east of the water tower between Cross Street and Michigan Avenue (See Figure 6). The gym was divided into two sections. The south side was used for women's classes while the north half was used by the men. It was in the north half that the demonstration took place. A photo of the new gymnasium with dedication banners at the end of the gym and the ceiling is presented in Figure 7. Notice that no basket had been set-up at the time of the dedication. Boughner mentioned that the game of basketball was so new to the area that baskets had not yet been installed. Basketball backboards and rims are a standard part of any gymnasium today. According to Boughner, Naismith continued his tour the following day with a demonstration in Mt. Pleasant, Michigan.

Where Naismith went from Mt. Pleasant is not known. We do know that basketball games and tournaments were held in cities and towns all the way to the West Coast as early as 1897 and in China by 1898 (Mechinkoff p.276). Some feel it reached other countries before some parts of the United States. The Y.M.C.A Training School at Springfield was an international one, with students from all over the world. After completing their training, students would return home with the knowledge of how to play basketball (Web Site #2).

Growth of women's basketball closely paralleled that of the men's game. Versions of women's basketball rules were developed as early as 1892 to 1894. In 1892 Senda Berenson Abbott, a physical education instructor at Smith College in Northampton, Mass., introduced basketball to women at the school. Men's basketball was considered too physically demanding for women. Consequently Berenson made significant changes to the game. Modifications included the following changes: 1) The court was divided into three equal sections and players could not move from one section to another; 2) women were prohibited from snatching or batting the ball from other players' hands; and 3) limiting the number of players to not fewer than six or more than nine on a side (Swanson, p 176). It was felt that these rules developed teamwork and encouraged combination plays. A photo of the 1904 Eastern Michigan Normal College Women's Team is presented in Figure 8.

One artifact, which has survived from the old Normal School Gymnasium, is an air pump once used by Wilber Bowen to inflate basketballs and footballs (See Figure 9). The method used for inflating a ball in the late 1800's and early 1900's was very different than the technique we use today. No air needles, needle holes in the ball, or air compressors were available then. Air bladders, inserted inside a leather cover, had an appendage similar to that of a balloon. To inflate a ball an individual had to either blow up the bladder or use an air pump such as the one shown in Figure 9. When using the air pump the appendage was slipped over (and secured) to the nose of the cone with one hand. The other hand gripped the pump handle and forced air into the bladder using a pumping motion. Once the bladder was filled, the air tube (appendage) was rolled up and placed under a leather tongue and secured tightly with laces. This process is exactly the same as lacing up a shoe.

Another contribution related to basketball with an Ypsilanti — Eastern Michigan Normal College connection is the standard officials uniform. In the summer 2005 issue of Ypsilanti Gleanings, mention was made of the Lloyd Olds innovation of the zebra striped shirt used by officials. The striped shirt was Olds' way of distinguishing officials from the players. That innovation is still being used by officials in basketball, football, soccer, and several other sports.

Mechinkoff, R. A. and Estes, S. G. (2005) A History and Philosophy of Sport and Physical Education, McGraw-Hill, Boston, Mass.

Swanson, R.A. and Spears, B. (1995) History of Sport and Physical Education in the United States, McGraw-Hill, Boston, Mass.