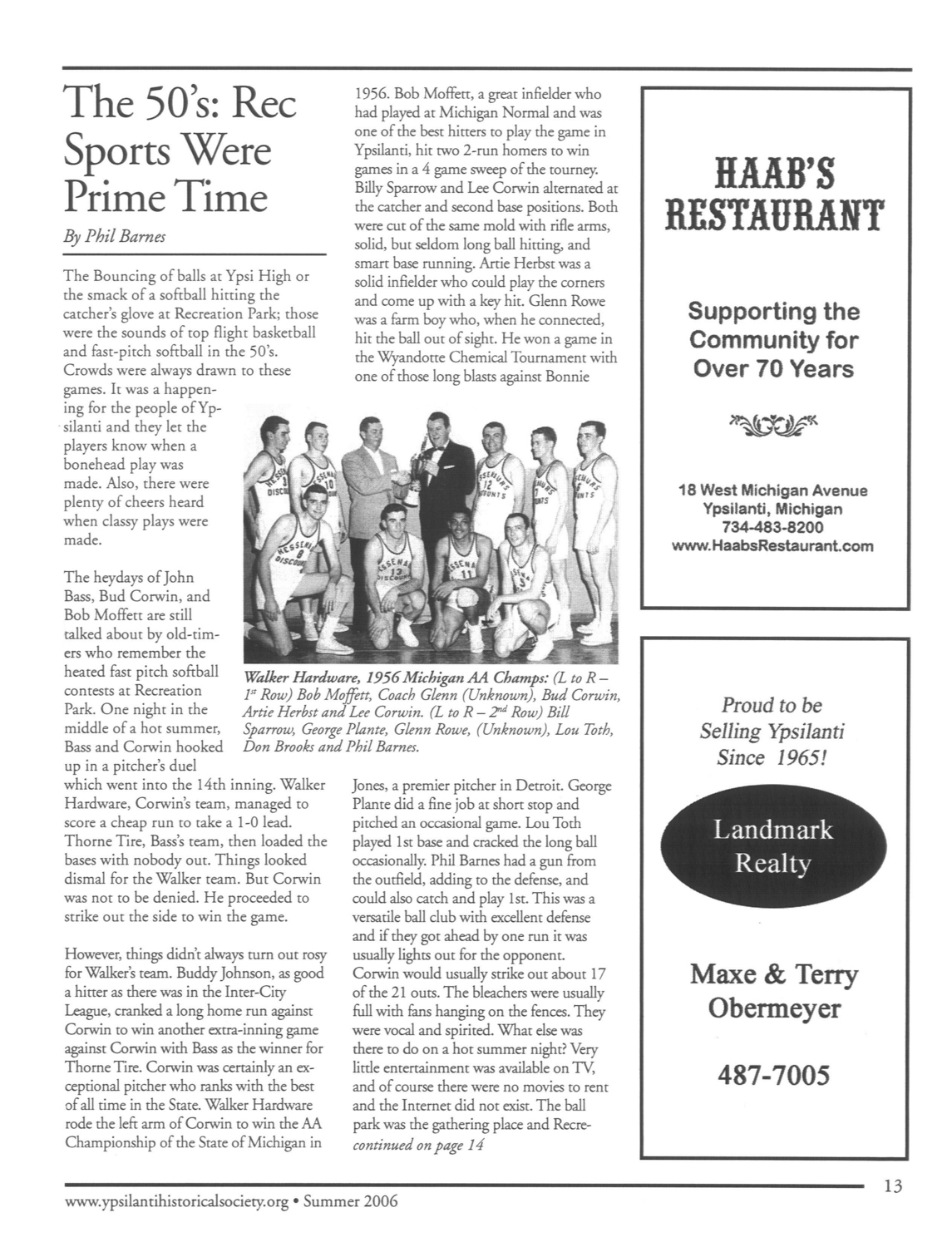 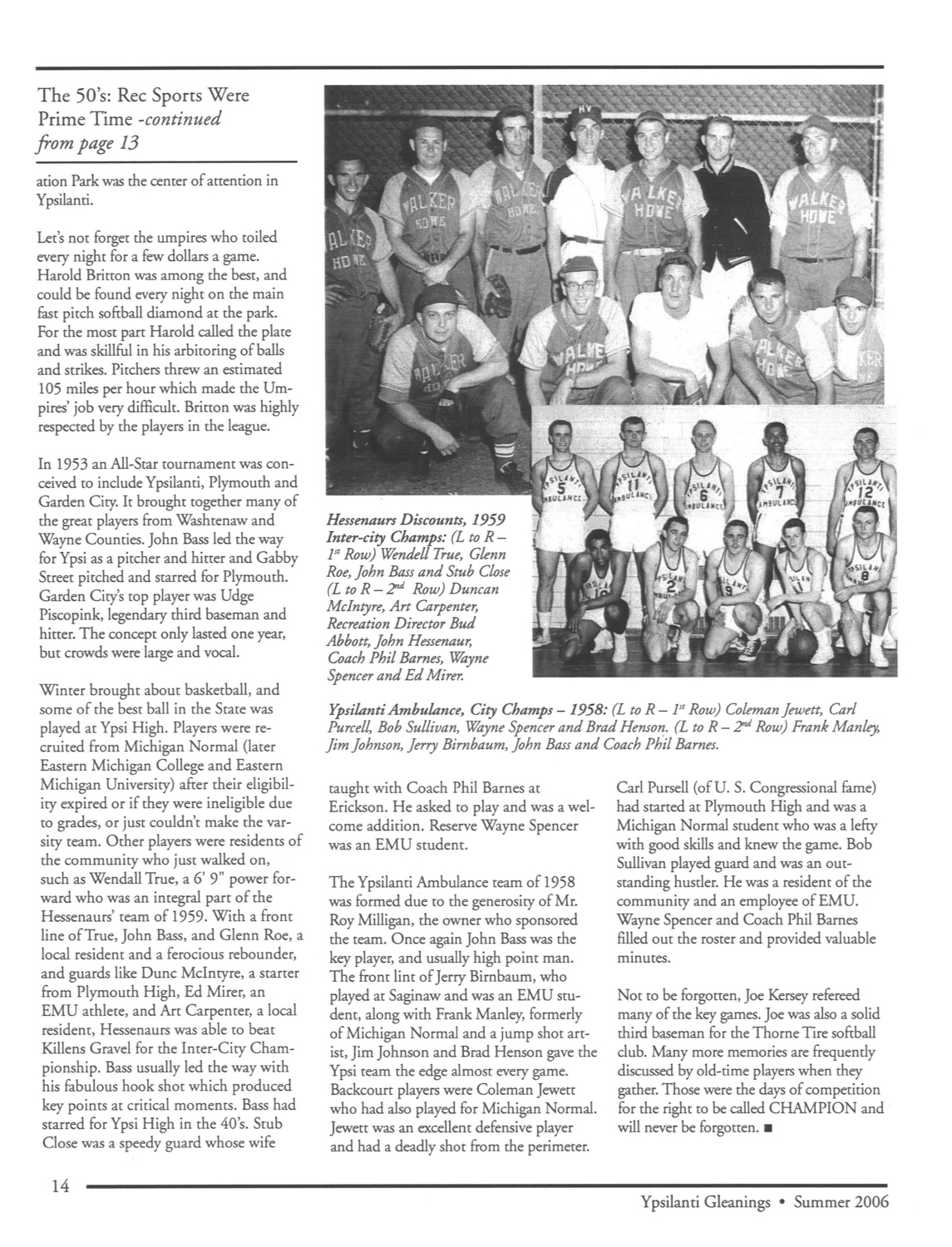 The Bouncing of balls at Ypsi High or the smack of a softball hitting the catcher's glove at Recreation Park; those were the sounds of top flight basketball and fast-pitch softball in the 50's. Crowds were always drawn to these games. It was a happening for the people of Ypsilanti and they let the players know when a bonehead play was made. Also, there were plenty of cheers heard when classy plays were made.

The heydays of John Bass, Bud Corwin, and Bob Moffett are still talked about by old-timers who remember the heated fast pitch softball contests at Recreation Park. One night in the middle of a hot summer, Bass and Corwin hooked up in a pitcher's duel which went into the 14th inning. Walker Hardware, Corwin's team, managed to score a cheap run to take a 1–0 lead. Thorne Tire, Bass's team, then loaded the bases with nobody out. Things looked dismal for the Walker team. But Corwin was not to be denied. He proceeded to strike out the side to win the game.

However, things didn't always turn out rosy for Walker's team. Buddy Johnson, as good a hitter as there was in the Inter-City League, cranked a long home run against Corwin to win another extra-inning game against Corwin with Bass as the winner for Thorne Tire. Corwin was certainly an exceptional pitcher who ranks with the best of all time in the State. Walker Hardware rode the left arm of Corwin to win the AA Championship of the State of Michigan in 1956. Bob Moffett, a great infielder who had played at Michigan Normal and was one of the best hitters to play the game in Ypsilanti, hit two 2-run homers to win games in a 4 game sweep of the tourney. Billy Sparrow and Lee Corwin alternated at the catcher and second base positions. Both were cut of the same mold with rifle arms, solid, but seldom long ball hitting, and smart base running. Artie Herbst was a solid infielder who could play the corners and come up with a key hit. Glenn Rowe was a farm boy who, when he connected, hit the ball out of sight. He won a game in the Wyandotte Chemical Tournament with one of those long blasts against Bonnie Jones, a premier pitcher in Detroit. George Plante did a fine job at short stop and pitched an occasional game. Lou Toth played 1st base and cracked the long ball occasionally. Phil Barnes had a gun from the outfield, adding to the defense, and could also catch and play 1st. This was a versatile ball club with excellent defense and if they got ahead by one run it was usually lights out for the opponent. Corwin would usually strike out about 17 of the 21 outs. The bleachers were usually full with fans hanging on the fences. They were vocal and spirited. What else was there to do on a hot summer night? Very little entertainment was available on TV, and of course there were no movies to rent and the Internet did not exist. The ball park was the gathering place and Recreation Park was the center of attention in Ypsilanti.

Let's not forget the umpires who toiled every night for a few dollars a game. Harold Britton was among the best, and could be found every night on the main fast pitch softball diamond at the park. For the most part Harold called the plate and was skillful in his arbitoring of balls and strikes. Pitchers threw an estimated 105 miles per hour which made the Umpires' job very difficult. Britton was highly respected by the players in the league.

In 1953 an All-Star tournament was conceived to include Ypsilanti, Plymouth and Garden City. It brought together many of the great players from Washtenaw and Wayne Counties. John Bass led the way for Ypsi as a pitcher and hitter and Gabby Street pitched and starred for Plymouth. Garden City's top player was Udge Piscopink, legendary third baseman and hitter. The concept only lasted one year, but crowds were large and vocal.

Winter brought about basketball, and some of the best ball in the State was played at Ypsi High. Players were recruited from Michigan Normal (later Eastern Michigan College and Eastern Michigan University) after their eligibility expired or if they were ineligible due to grades, or just couldn't make the varsity team. Other players were residents of the community who just walked on, such as Wendall True, a 6 9 power forward who was an integral part of the Hessenaurs' team of 1959. With a front line of True, John Bass, and Glenn Roe, a local resident and a ferocious rebounder, and guards like Dunc McIntyre, a starter from Plymouth High, Ed Mirer, an EMU athlete, and Art Carpenter, a local resident, Hessenaurs was able to beat Killens Gravel for the Inter-City Championship. Bass usually led the way with his fabulous hook shot which produced key points at critical moments. Bass had starred for Ypsi High in the 40's. Stub Close was a speedy guard whose wife taught with Coach Phil Barnes at Erickson. He asked to play and was a welcome addition. Reserve Wayne Spencer was an EMU student.

The Ypsilanti Ambulance team of 1958 was formed due to the generosity of Mr. Roy Milligan, the owner who sponsored the team. Once again John Bass was the key player, and usually high point man. The front lint of Jerry Birnbaum, who played at Saginaw and was an EMU student, along with Frank Manley, formerly of Michigan Normal and a jump shot artist, Jim Johnson and Brad Henson gave the Ypsi team the edge almost every game. Backcourt players were Coleman Jewett who had also played for Michigan Normal. Jewett was an excellent defensive player and had a deadly shot from the perimeter.

Carl Pursell (of U. S. Congressional fame) had started at Plymouth High and was a Michigan Normal student who was a lefty with good skills and knew the game. Bob Sullivan played guard and was an outstanding hustler. He was a resident of the community and an employee of EMU. Wayne Spencer and Coach Phil Barnes filled out the roster and provided valuable minutes.

Not to be forgotten, Joe Kersey referred many of the key games. Joe was also a solid third baseman for the Thorne Tire softball club. Many more memories are frequently discussed by old-time players when they gather. Those were the days of competition for the right to be called CHAMPION and will never be forgotten.