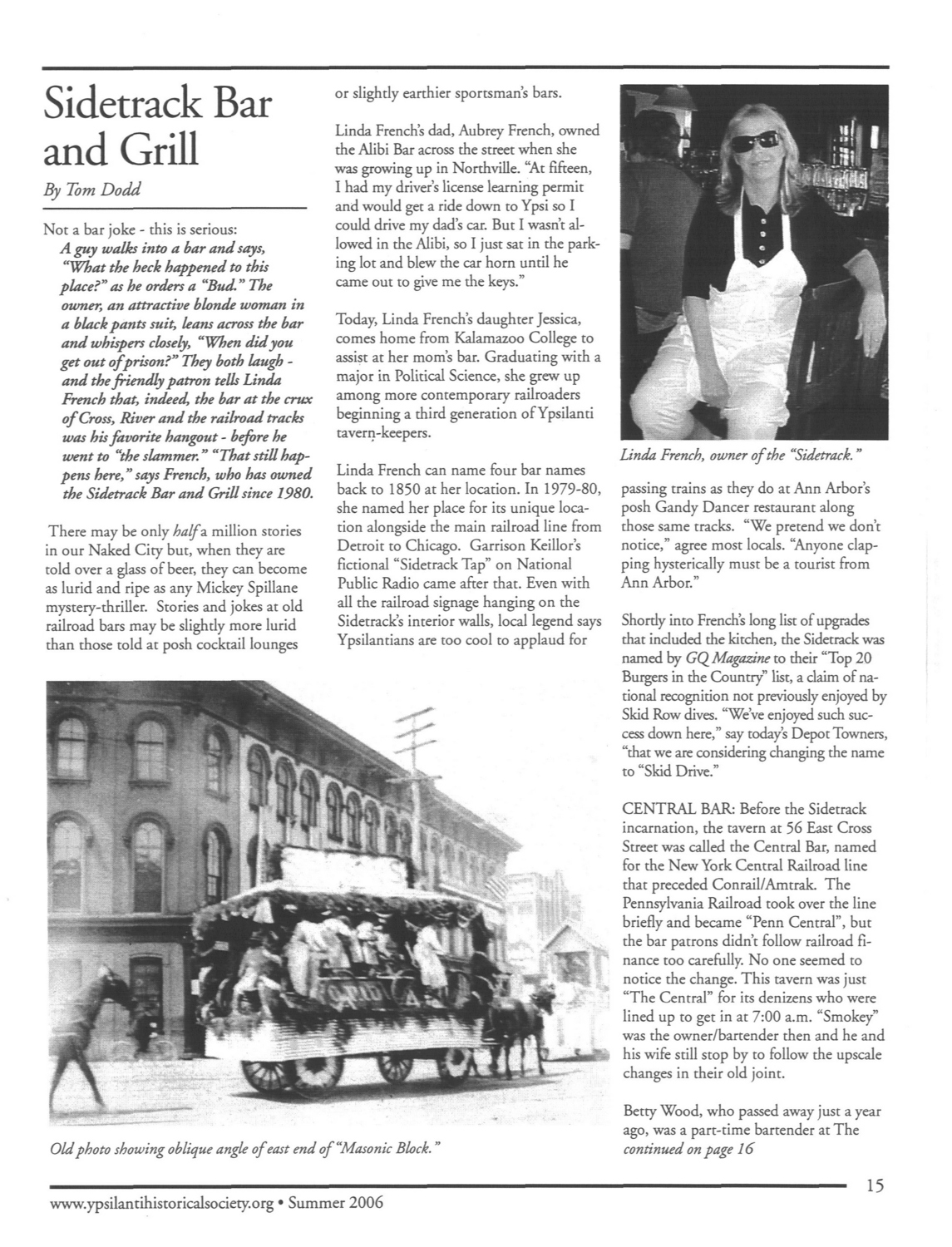 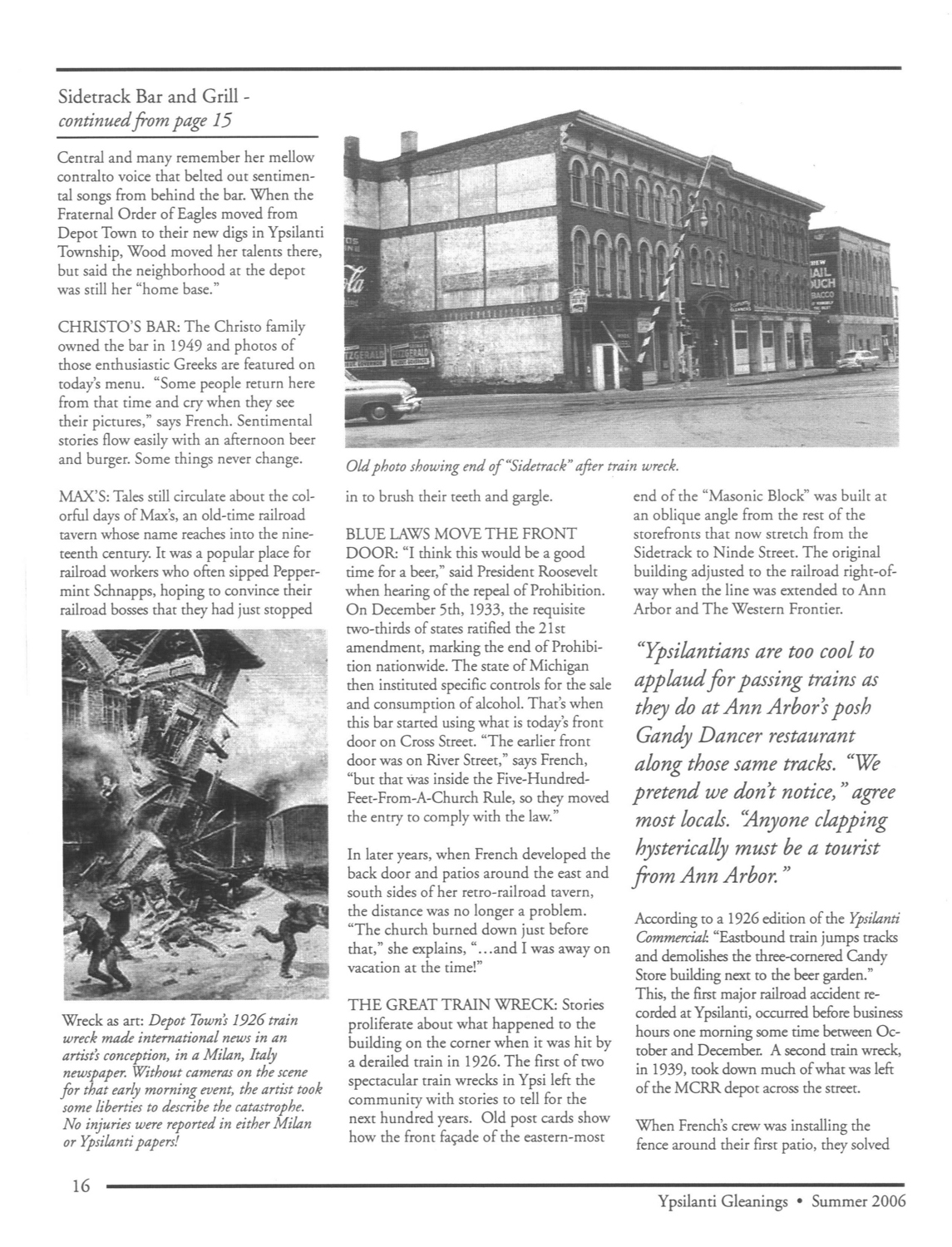 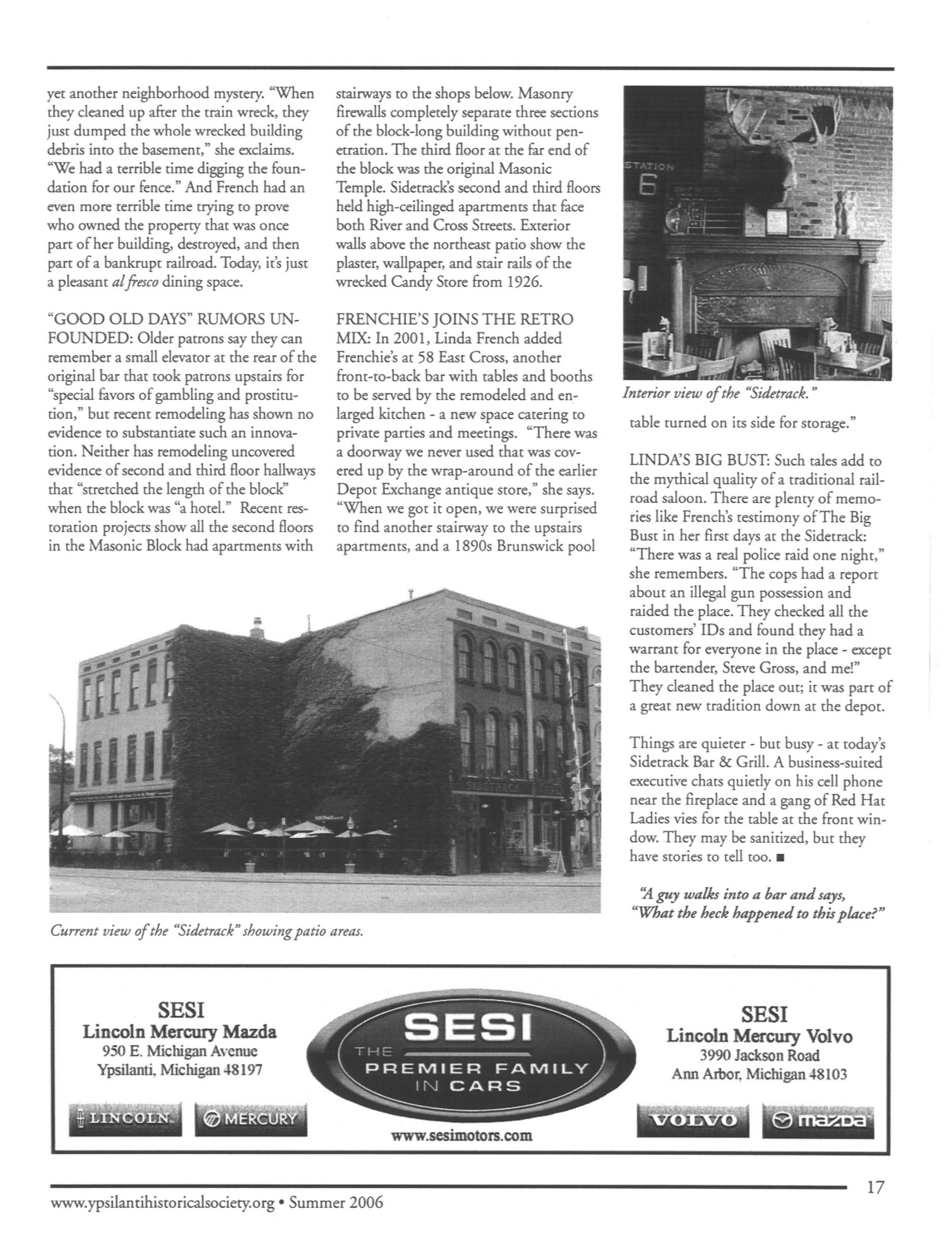 A guy walks into a bar and says, “What the heck happened to this place?” as he orders a “Bud.” The owner, an attractive blonde woman in a black pants suit, leans across the bar and whispers closely, “When did you get out of prison?” They both laugh-and the friendly patron tells Linda French that, indeed, the bar at the crux of Cross, River and the railroad tracks was his favorite hangout-before he went to “the slammer.” “That still happens here,” says French, who has owned the Sidetrack Bar and Grill since 1980.

There may be only half a million stories in our Naked City but, when they are told over a glass of beer, they can become as lurid and ripe as any Mickey Spillane mystery-thriller. Stories and jokes at old railroad bars may be slightly more lurid than those told at posh cocktail lounges or slightly earthier sportsman's bars.

Linda French's dad, Aubrey French, owned the Alibi Bar across the street when she was growing up in Northville. “At fifteen, I had my driver's license learning permit and would get a ride down to Ypsi so I could drive my dad's car. But I wasn't allowed in the Alibi, so I just sat in the parking lot and blew the car horn until he came out to give me the keys.”

Today, Linda French's daughter Jessica, comes home from Kalamazoo College to assist at her mom's bar. Graduating with a major in Political Science, she grew up among more contemporary railroaders beginning a third generation of Ypsilanti tavern-keepers.

Linda French can name four bar names back to 1850 at her location. In 1979–80, she named her place for its unique location alongside the main railroad line from Detroit to Chicago. Garrison Keillor's fictional “Sidetrack Tap” on National Public Radio came after that. Even with all the railroad signage hanging on the Sidetrack's interior walls, local legend says Ypsilantians are too cool to applaud for passing trains as they do at Ann Arbor's posh Gandy Dancer restaurant along those same tracks. “We pretend we don't notice,” agree most locals. “Anyone clapping hysterically must be a tourist from Ann Arbor.”

Shortly into French's long list of upgrades that included the kitchen, the Sidetrack was named by GQ Magazine to their “Top 20 Burgers in the Country” list, a claim of national recognition not previously enjoyed by Skid Row dives. “We've enjoyed such success down here,” say today's Depot Towners, “that we are considering changing the name to “Skid Drive.”

CENTRAL BAR: Before the Sidetrack incarnation, the tavern at 56 East Cross Street was called the Central Bar, named for the New York Central Railroad line that preceded Conrail/Amtrak. The Pennsylvania Railroad took over the line briefly and became “Penn Central”, but the bar patrons didn't follow railroad finance too carefully. No one seemed to notice the change. This tavern was just “The Central” for its denizens who were lined up to get in at 7:00 a.m. “Smokey” was the owner/bartender then and he and his wife still stop by to follow the upscale changes in their old joint.

Betty Wood, who passed away just a year ago, was a part-time bartender at The Central and many remember her mellow contralto voice that belted out sentimental songs from behind the bar. When the Fraternal Order of Eagles moved from Depot Town to their new digs in Ypsilanti Township, Wood moved her talents there, but said the neighborhood at the depot was still her “home base.”

CHRISTO'S BAR: The Christo family owned the bar in 1949 and photos of those enthusiastic Greeks are featured on today's menu. “Some people return here from that time and cry when they see their pictures,” says French. Sentimental stories flow easily with an afternoon beer and burger. Some things never change.

MAX'S: Tales still circulate about the colorful days of Max's, an old-time railroad tavern whose name reaches into the nineteenth century. It was a popular place for railroad workers who often sipped Peppermint Schnapps, hoping to convince their railroad bosses that they had just stopped in to brush their teeth and gargle.

BLUE LAWS MOVE THE FRONT DOOR: “I think this would be a good time for a beer,” said President Roosevelt when hearing of the repeal of Prohibition. On December 5th, 1933, the requisite two-thirds of states ratified the 21st amendment, marking the end of Prohibition nationwide. The state of Michigan then instituted specific controls for the sale and consumption of alcohol. That's when this bar started using what is today's front door on Cross Street. “The earlier front door was on River Street,” says French, “but that was inside the Five-Hundred-Feet-From-A-Church Rule, so they moved the entry to comply with the law.”

In later years, when French developed the back door and patios around the east and south sides of her retro-railroad tavern, the distance was no longer a problem. “The church burned down just before that,” she explains,”…and I was away on vacation at the time!”

THE GREAT TRAIN WRECK: Stories proliferate about what happened to the building on the corner when it was hit by a derailed train in 1926. The first of two spectacular train wrecks in Ypsi left the community with stories to tell for the next hundred years. Old post cards show how the front facade of the eastern-most end of the “Masonic Block” was built at an oblique angle from the rest of the storefronts that now stretch from the Sidetrack to Ninde Street. The original building adjusted to the railroad right-of-way when the line was extended to Ann Arbor and The Western Frontier.

According to a 1926 edition of the Ypsilanti Commercial: “Eastbound train jumps tracks and demolishes the three-cornered Candy Store building next to the beer garden.” This, the first major railroad accident recorded at Ypsilanti, occurred before business hours one morning some time between October and December. A second train wreck, in 1939, took down much of what was left of the MCRR depot across the street.

When French's crew was installing the fence around their first patio, they solved yet another neighborhood mystery. “When they cleaned up after the train wreck, they just dumped the whole wrecked building debris into the basement,” she exclaims. “We had a terrible time digging the foundation for our fence.” And French had an even more terrible time trying to prove who owned the property that was once part of her building, destroyed, and then part of a bankrupt railroad. Today, it's just a pleasant al fresco dining space.

“GOOD OLD DAYS” RUMORS UNFOUNDED: Older patrons say they can remember a small elevator at the rear of the original bar that took patrons upstairs for “special favors of gambling and prostitution,” but recent remodeling has shown no evidence to substantiate such an innovation. Neither has remodeling uncovered evidence of second and third floor hallways that “stretched the length of the block” when the block was “a hotel.” Recent restoration projects show all the second floors in the Masonic Block had apartments with stairways to the shops below. Masonry firewalls completely separate three sections of the block-long building without penetration. The third floor at the far end of the block was the original Masonic Temple. Sidetrack's second and third floors held high-ceilinged apartments that face both River and Cross Streets. Exterior walls above the northeast patio show the plaster, wallpaper, and stair rails of the wrecked Candy Store from 1926.

FRENCHIE'S JOINS THE RETRO MIX: In 2001, Linda French added Frenchie's at 58 East Cross, another front-to-back bar with tables and booths to be served by the remodeled and enlarged kitchen-a new space catering to private parties and meetings. “There was a doorway we never used that was covered up by the wrap-around of the earlier Depot Exchange antique store,” she says. “When we got it open, we were surprised to find another stairway to the upstairs apartments, and a 1890s Brunswick pool table turned on its side for storage.”

LINDA'S BIG BUST: Such tales add to the mythical quality of a traditional rail-road saloon. There are plenty of memories like French's testimony of The Big Bust in her first days at the Sidetrack: “There was a real police raid one night,” she remembers. “The cops had a report about an illegal gun possession and raided the place. They checked all the customers' IDs and found they had a warrant for everyone in the place-except the bartender, Steve Gross, and me!” They cleaned the place out; it was part of a great new tradition down at the depot.

Things are quieter-but busy-at today's Sidetrack Bar & Grill. A business-suited executive chats quietly on his cell phone near the fireplace and a gang of Red Hat Ladies vies for the table at the front window. They may be sanitized, but they have stories to tell too.

Hey, were you looking for the Summer Game code? You found it! Enter THATSTHETICKET on your play.aadl.org player page for your badge.