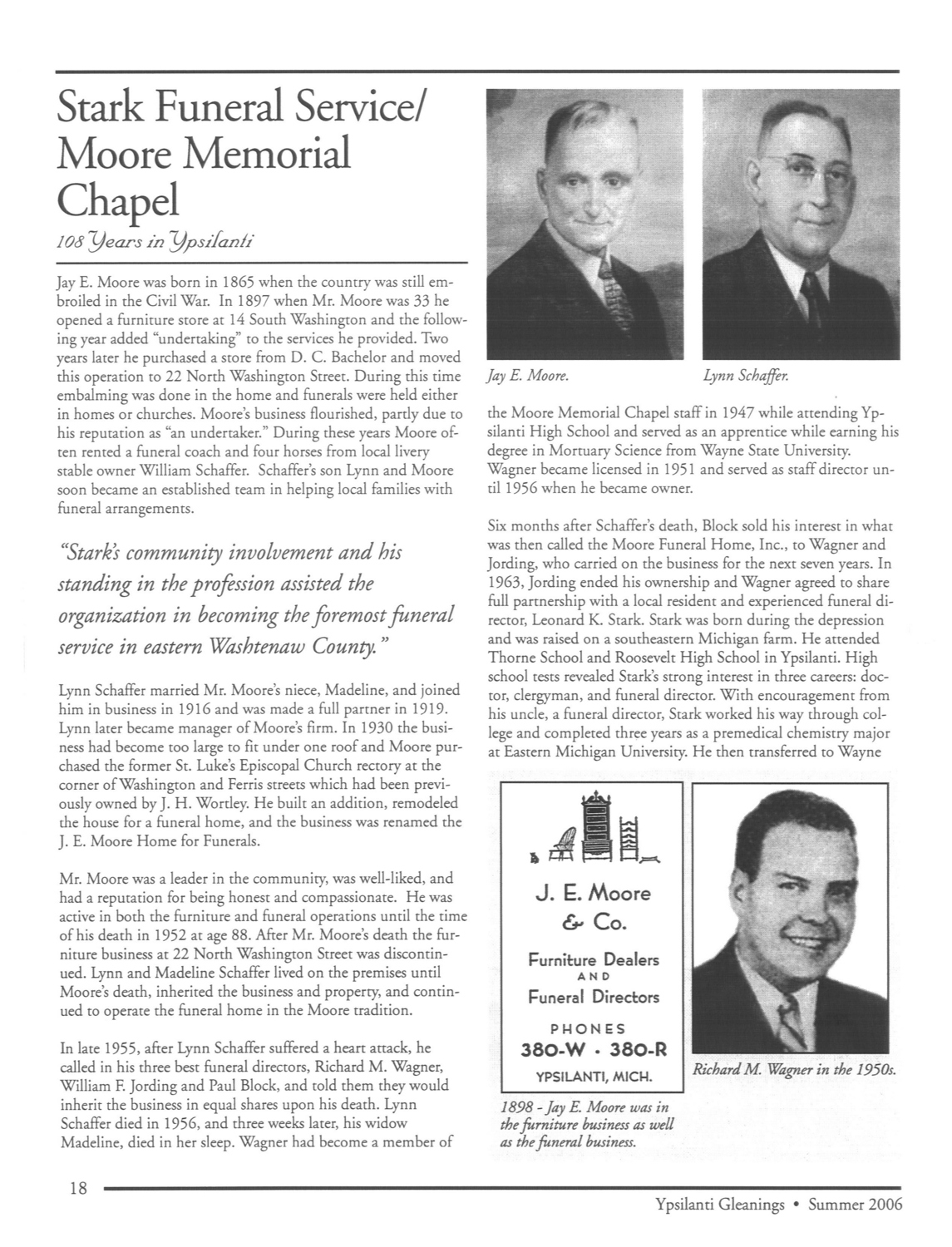 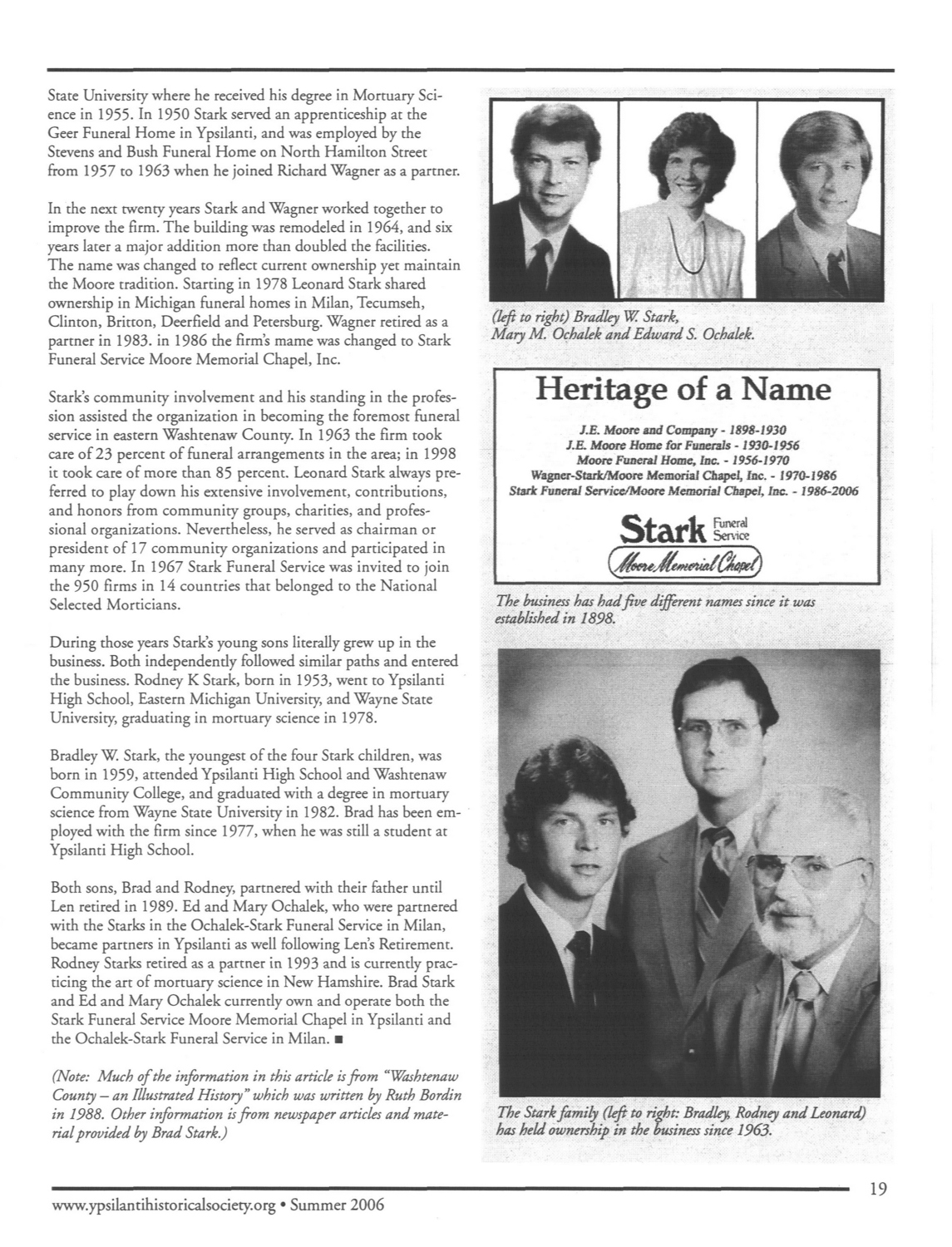 Jay E. Moore was born in 1865 when the country was still embroiled in the Civil War. In 1897 when Mr. Moore was 33 he opened a furniture store at 14 South Washington and the following year added “undertaking” to the services he provided. Two years later he purchased a store from D. C. Bachelor and moved this operation to 22 North Washington Street. During this time embalming was done in the home and funerals were held either in homes or churches. Moore's business flourished, partly due to his reputation as “an undertaker.” During these years Moore often rented a funeral coach and four horses from local livery stable owner William Schaffer. Schaffer's son Lynn and Moore soon became an established team in helping local families with funeral arrangements.

“Stark's community involvement and his standing in the profession assisted the organization in becoming the foremost funeral service in eastern Washtenaw County.”

Lynn Schaffer married Mr. Moore's niece, Madeline, and joined him in business in 1916 and was made a full partner in 1919. Lynn later became manager of Moore's firm. In 1930 the business had become too large to fit under one roof and Moore purchased the former St. Luke's Episcopal Church rectory at the corner of Washington and Ferris streets which had been previously owned by J. H. Wortley. He built an addition, remodeled the house for a funeral home, and the business was renamed the J. E. Moore Home for Funerals.

Mr. Moore was a leader in the community, was well-liked, and had a reputation for being honest and compassionate. He was active in both the furniture and funeral operations until the time of his death in 1952 at age 88. After Mr. Moore's death the furniture business at 22 North Washington Street was discontinued. Lynn and Madeline Schaffer lived on the premises until Moore's death, inherited the business and property, and continued to operate the funeral home in the Moore tradition.

In late 1955, after Lynn Schaffer suffered a heart attack, he called in his three best funeral directors, Richard M. Wagner, William F. Jording and Paul Block, and told them they would inherit the business in equal shares upon his death. Lynn Schaffer died in 1956, and three weeks later, his widow Madeline, died in her sleep. Wagner had become a member of the Moore Memorial Chapel staff in 1947 while attending Ypsilanti High School and served as an apprentice while earning his degree in Mortuary Science from Wayne State University.

Wagner became licensed in 1951 and served as staff director until 1956 when he became owner.

Six months after Schaffer's death, Block sold his interest in what was then called the Moore Funeral Home, Inc., to Wagner and Jording, who carried on the business for the next seven years. In 1963, Jording ended his ownership and Wagner agreed to share full partnership with a local resident and experienced funeral director, Leonard K. Stark. Stark was born during the depression and was raised on a southeastern Michigan farm. He attended Thorne School and Roosevelt High School in Ypsilanti. High school tests revealed Stark's strong interest in three careers: doctor, clergyman, and funeral director. With encouragement from his uncle, a funeral director, Stark worked his way through college and completed three years as a premedical chemistry major at Eastern Michigan University. He then transferred to Wayne State University where he received his degree in Mortuary Science in 1955. In 1950 Stark served an apprenticeship at the Geer Funeral Home in Ypsilanti, and was employed by the Stevens and Bush Funeral Home on North Hamilton Street from 1957 to 1963 when he joined Richard Wagner as a partner.

In the next twenty years Stark and Wagner worked together to improve the firm. The building was remodeled in 1964, and six years later a major addition more than doubled the facilities. The name was changed to reflect current ownership yet maintain the Moore tradition. Starting in 1978 Leonard Stark shared ownership in Michigan funeral homes in Milan, Tecumseh, Clinton, Britton, Deerfield and Petersburg. Wagner retired as a partner in 1983. in 1986 the firm's mame was changed to Stark Funeral Service Moore Memorial Chapel, Inc.

Stark's community involvement and his standing in the profession assisted the organization in becoming the foremost funeral service in eastern Washtenaw County. In 1963 the firm took care of 23 percent of funeral arrangements in the area; in 1998 it took care of more than 85 percent. Leonard Stark always preferred to play down his extensive involvement, contributions, and honors from community groups, charities, and professional organizations. Nevertheless, he served as chairman or president of 17 community organizations and participated in many more. In 1967 Stark Funeral Service was invited to join the 950 firms in 14 countries that belonged to the National Selected Morticians.

During those years Stark's young sons literally grew up in the business. Both independently followed similar paths and entered the business. Rodney K Stark, born in 1953, went to Ypsilanti High School, Eastern Michigan University, and Wayne State University, graduating in mortuary science in 1978.

Bradley W. Stark, the youngest of the four Stark children, was born in 1959, attended Ypsilanti High School and Washtenaw Community College, and graduated with a degree in mortuary science from Wayne State University in 1982. Brad has been employed with the firm since 1977, when he was still a student at Ypsilanti High School.

(Note: Much of the information in this article is from “Washtenaw County — an Illustrated History” which was written by Ruth Bordin in 1988. Other information is from newspaper articles and material provided by Brad Stark.)