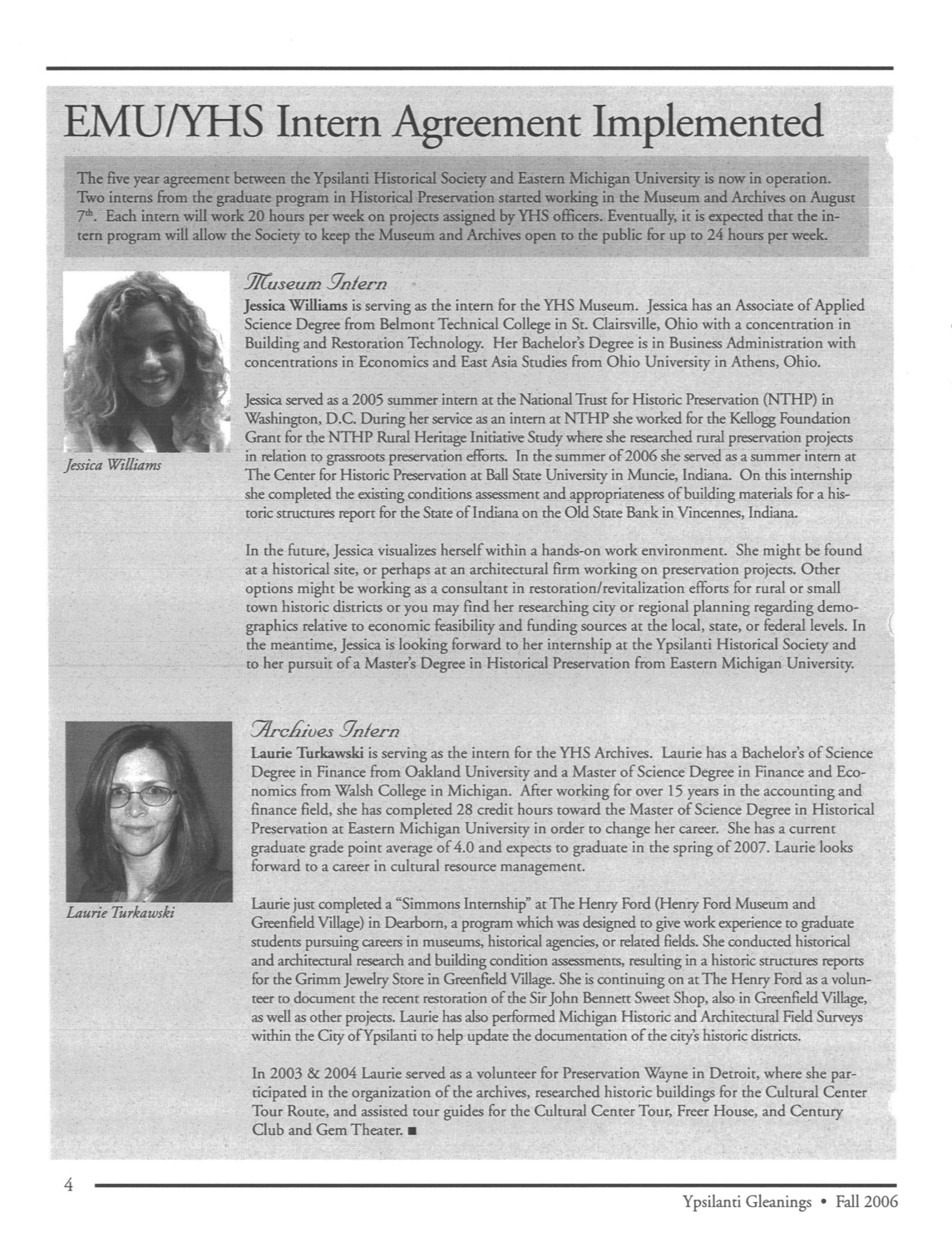 The five year agreement between the Ypsilanti Historical Society and Eastern Michigan University is now in operation. Two interns from the graduate program in Historical Preservation started working in the Museum and Archives on August 7th. Each intern will work 20 hours per week on projects assigned by YHS officers. Eventually, it is expected that the intern program will allow the Society to keep the Museum and Archives open to the public for up to 24 hours per week.

Jessica Williams is serving as the intern for the YHS Museum. Jessica has an Associate of Applied Science Degree from Belmont Technical College in St. Clairsville, Ohio with a concentration in Building and Restoration Technology. Her Bachelor's Degree is in Business Administration with concentrations in Economics and East Asia Studies from Ohio University in Athens, Ohio.

Jessica served as a 2005 summer intern at the National Trust for Historic Preservation (NTHP) in Washington, D.C. During her service as an intern at NTHP she worked for the Kellogg Foundation Grant for the NTHP Rural Heritage Initiative Study where she researched rural preservation projects in relation to grassroots preservation efforts. In the summer of 2006 she served as a summer intern at The Center for Historic Preservation at Ball State University in Muncie, Indiana. On this internship she completed the existing conditions assessment and appropriateness of building materials for a historic structures report for the State of Indiana on the Old State Bank in Vincennes, Indiana.

In the future, Jessica visualizes herself within a hands-on work environment. She might be found at a historical site, or perhaps at an architectural firm working on preservation projects. Other options might be working as a consultant in restoration/revitalization efforts for rural or small town historic districts or you may find her researching city or regional planning regarding demographics relative to economic feasibility and funding sources at the local, state, or federal levels. In the meantime, Jessica is looking forward to her internship at the Ypsilanti Historical Society and to her pursuit of a Master's Degree in Historical Preservation from Eastern Michigan University.

Laurie Turkawski is serving as the intern for the YHS Archives. Laurie has a Bachelor's of Science Degree in Finance from Oakland University and a Master of Science Degree in Finance and Economics from Walsh College in Michigan. After working for over 15 years in the accounting and finance field, she has completed 28 credit hours toward the Master of Science Degree in Historical Preservation at Eastern Michigan University in order to change her career. She has a current graduate grade point average of 4.0 and expects to graduate in the spring of 2007. Laurie looks forward to a career in cultural resource management.

Laurie just completed a “Simmons Internship” at The Henry Ford (Henry Ford Museum and Greenfield Village) in Dearborn, a program which was designed to give work experience to graduate students pursuing careers in museums, historical agencies, or related fields. She conducted historical and architectural research and building condition assessments, resulting in a historic structures reports for the Grimm Jewelry Store in Greenfield Village. She is continuing on at The Henry Ford as a volunteer to document the recent restoration of the Sir John Bennett Sweet Shop, also in Greenfield Village, as well as other projects. Laurie has also performed Michigan Historic and Architectural Field Surveys within the City of Ypsilanti to help update the documentation of the city's historic districts.