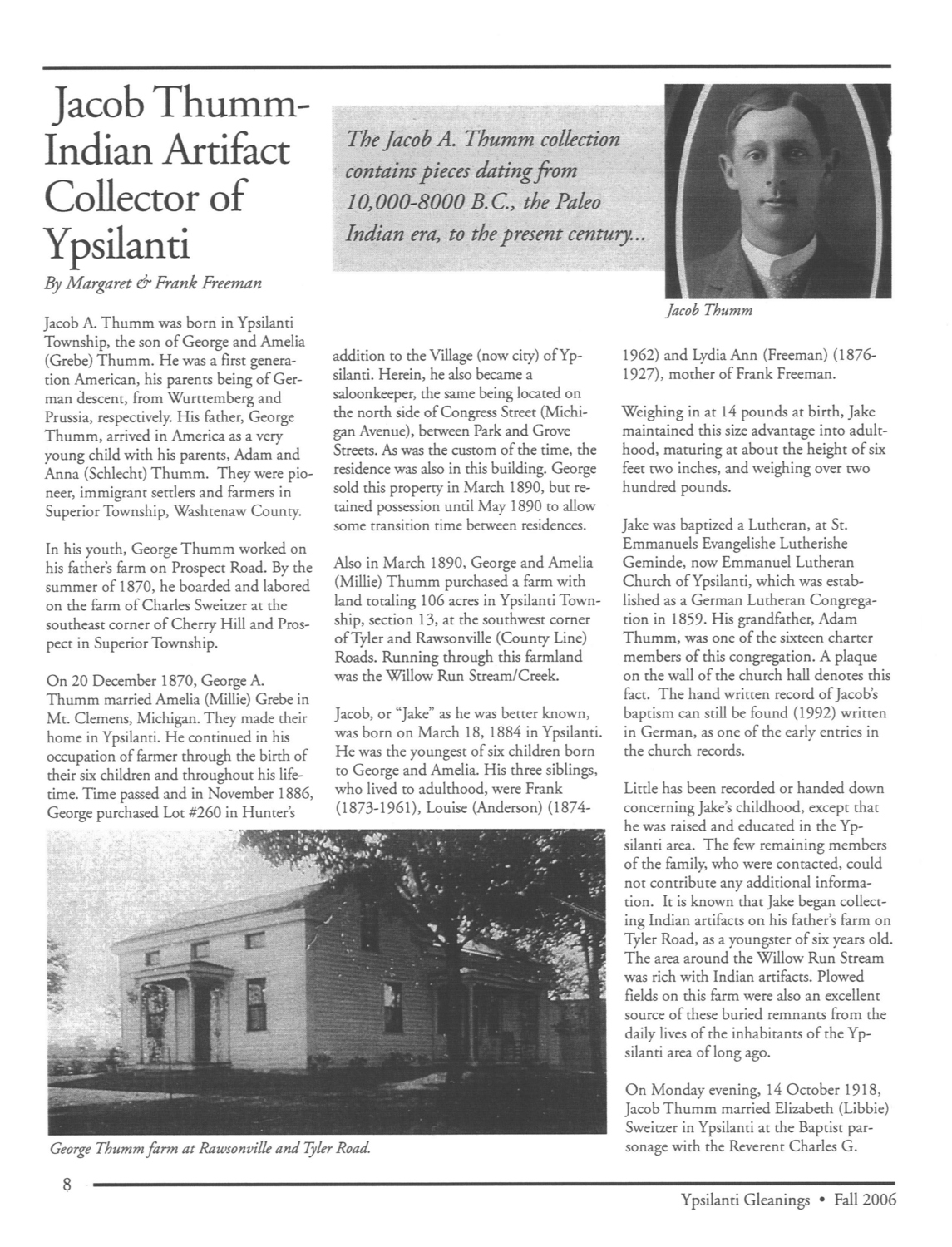 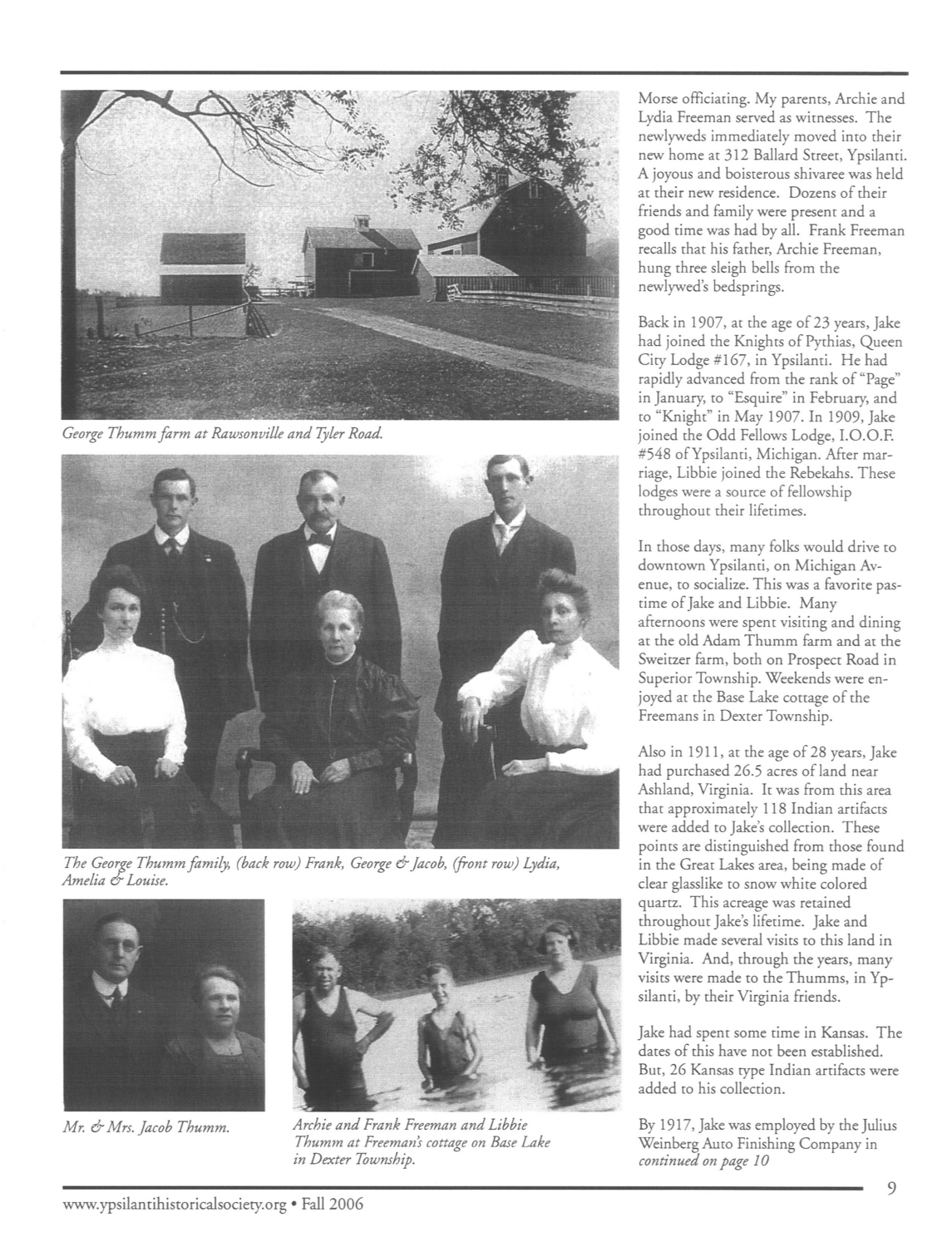 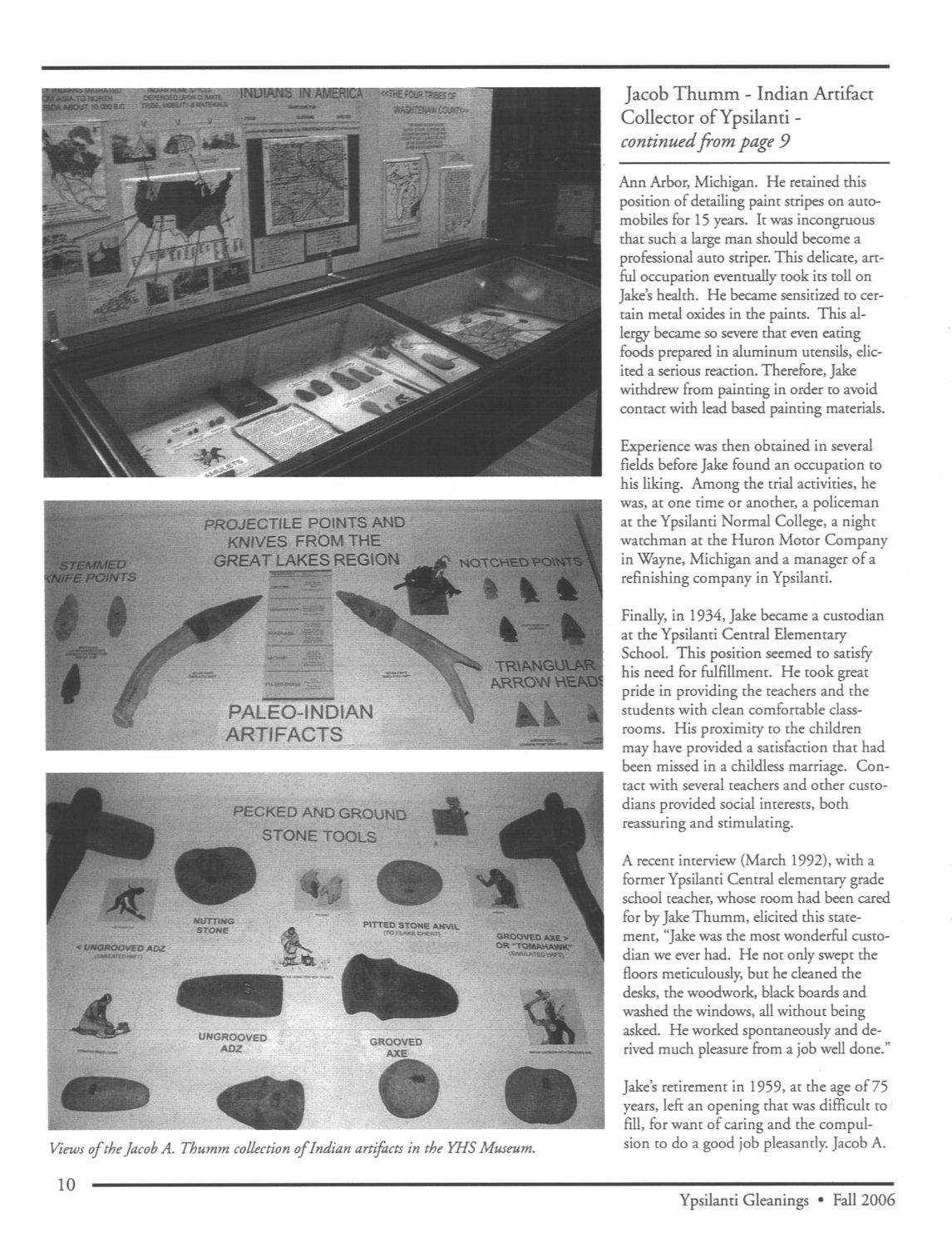 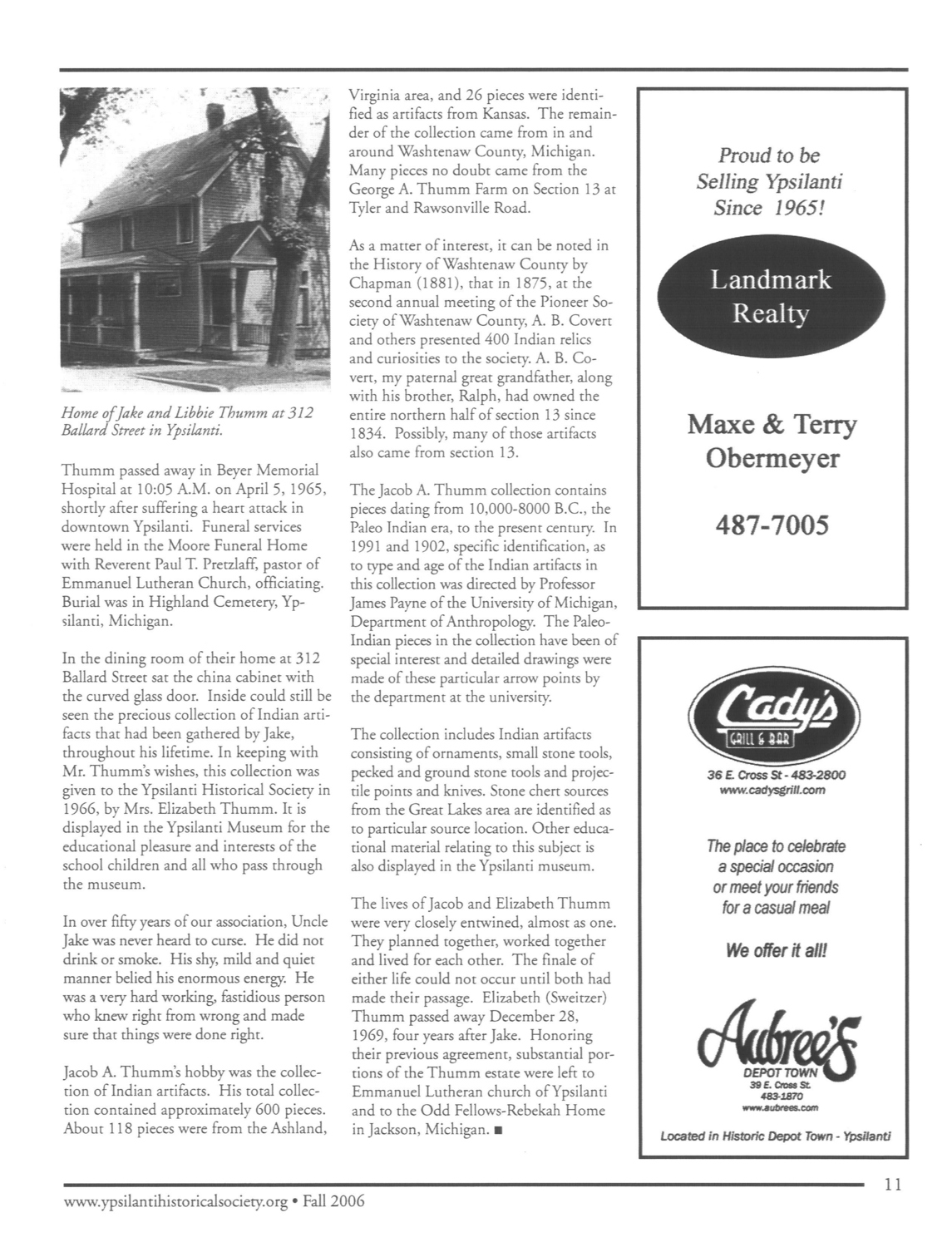 Jacob A. Thumm was born in Ypsilanti Township, the son of George and Amelia (Grebe) Thumm. He was a first generation American, his parents being of German descent, from Wurttemberg and Prussia, respectively. His father, George Thumm, arrived in America as a very young child with his parents, Adam and Anna (Schlecht) Thumm. They were pioneer, immigrant settlers and farmers in Superior Township, Washtenaw County.

In his youth, George Thumm worked on his father's farm on Prospect Road. By the summer of 1870, he boarded and labored on the farm of Charles Sweitzer at the southeast corner of Cherry Hill and Prospect in Superior Township.

On 20 December 1870, George A. Thumm married Amelia (Millie) Grebe in Mt. Clemens, Michigan. They made their home in Ypsilanti. He continued in his occupation of farmer through the birth of their six children and throughout his life-time. Time passed and in November 1886, George purchased Lot #260 in Hunter's addition to the Village (now city) of Ypsilanti. Herein, he also became a saloonkeeper, the same being located on the north side of Congress Street (Michigan Avenue), between Park and Grove Streets. As was the custom of the time, the residence was also in this building. George sold this property in March 1890, but retained possession until May 1890 to allow some transition time between residences.

The Jacob A. Thumm collection contains pieces dating from 10,000–8000 B.C., the Paleo Indian era, to the present century…

Also in March 1890, George and Amelia (Millie) Thumm purchased a farm with land totaling 106 acres in Ypsilanti Township, section 13, at the southwest corner of Tyler and Rawsonville (County Line) Roads. Running through this farmland was the Willow Run Stream/Creek.

Weighing in at 14 pounds at birth, Jake maintained this size advantage into adulthood, maturing at about the height of six feet two inches, and weighing over two hundred pounds.

Jake was baptized a Lutheran, at St. Emmanuels Evangelishe Lutherishe Geminde, now Emmanuel Lutheran Church of Ypsilanti, which was established as a German Lutheran Congregation in 1859. His grandfather, Adam Thumm, was one of the sixteen charter members of this congregation. A plaque on the wall of the church hall denotes this fact. The hand written record of Jacob's baptism can still be found (1992) written in German, as one of the early entries in the church records.

Little has been recorded or handed down concerning Jake's childhood, except that he was raised and educated in the Ypsilanti area. The few remaining members of the family, who were contacted, could not contribute any additional information. It is known that Jake began collecting Indian artifacts on his father's farm on Tyler Road, as a youngster of six years old. The area around the Willow Run Stream was rich with Indian artifacts. Plowed fields on this farm were also an excellent source of these buried remnants from the daily lives of the inhabitants of the Ypsilanti area of long ago.

Morse officiating. My parents, Archie and Lydia Freeman served as witnesses. The newlyweds immediately moved into their new home at 312 Ballard Street, Ypsilanti. A joyous and boisterous shivaree was held at their new residence. Dozens of their friends and family were present and a good time was had by all. Frank Freeman recalls that his father, Archie Freeman, hung three sleigh bells from the newlywed's bedsprings.

Back in 1907, at the age of 23 years, Jake had joined the Knights of Pythias, Queen City Lodge #167, in Ypsilanti. He had rapidly advanced from the rank of “Page” in January, to “Esquire” in February, and to “Knight” in May 1907. In 1909, Jake joined the Odd Fellows Lodge, I.O.O.F. #548 of Ypsilanti, Michigan. After marriage, Libbie joined the Rebekahs. These lodges were a source of fellowship throughout their lifetimes.

In those days, many folks would drive to downtown Ypsilanti, on Michigan Avenue, to socialize. This was a favorite pastime of Jake and Libbie. Many afternoons were spent visiting and dining at the old Adam Thumm farm and at the Sweitzer farm, both on Prospect Road in Superior Township. Weekends were enjoyed at the Base Lake cottage of the Freemans in Dexter Township.

Also in 1911, at the age of 28 years, Jake had purchased 26.5 acres of land near Ashland, Virginia. It was from this area that approximately 118 Indian artifacts were added to Jake's collection. These points are distinguished from those found in the Great Lakes area, being made of clear glasslike to snow white colored quartz. This acreage was retained throughout Jake's lifetime. Jake and Libbie made several visits to this land in Virginia. And, through the years, many visits were made to the Thumms, in Ypsilanti, by their Virginia friends.

Jake had spent some time in Kansas. The dates of this have not been established. But, 26 Kansas type Indian artifacts were added to his collection.

By 1917, Jake was employed by the Julius Weinberg Auto Finishing Company in Ann Arbor, Michigan. He retained this position of detailing paint stripes on automobiles for 15 years. It was incongruous that such a large man should become a professional auto striper. This delicate, artful occupation eventually took its toll on Jake's health. He became sensitized to certain metal oxides in the paints. This allergy became so severe that even eating foods prepared in aluminum utensils, elicited a serious reaction. Therefore, Jake withdrew from painting in order to avoid contact with lead based painting materials.

Experience was then obtained in several fields before Jake found an occupation to his liking. Among the trial activities, he was, at one time or another, a policeman at the Ypsilanti Normal College, a night watchman at the Huron Motor Company in Wayne, Michigan and a manager of a refinishing company in Ypsilanti.

Finally, in 1934, Jake became a custodian at the Ypsilanti Central Elementary School. This position seemed to satisfy his need for fulfillment. He took great pride in providing the teachers and the students with clean comfortable classrooms. His proximity to the children may have provided a satisfaction that had been missed in a childless marriage. Contact with several teachers and other custodians provided social interests, both reassuring and stimulating.

A recent interview (March 1992), with a former Ypsilanti Central elementary grade school teacher, whose room had been cared for by Jake Thumm, elicited this statement, “Jake was the most wonderful custodian we ever had. He not only swept the floors meticulously, but he cleaned the desks, the woodwork, black boards and washed the windows, all without being asked. He worked spontaneously and derived much pleasure from a job well done.”

Jake's retirement in 1959, at the age of 75 years, left an opening that was difficult to fill, for want of caring and the compulsion to do a good job pleasantly. Jacob A.

In the dining room of their home at 312 Ballard Street sat the china cabinet with the curved glass door. Inside could still be seen the precious collection of Indian artifacts that had been gathered by Jake, throughout his lifetime. In keeping with Mr. Thumm's wishes, this collection was given to the Ypsilanti Historical Society in 1966, by Mrs. Elizabeth Thumm. It is displayed in the Ypsilanti Museum for the educational pleasure and interests of the school children and all who pass through the museum.

In over fifty years of our association, Uncle Jake was never heard to curse. He did not drink or smoke. His shy, mild and quiet manner belied his enormous energy. He was a very hard working, fastidious person who knew right from wrong and made sure that things were done right.

Jacob A. Thumm's hobby was the collection of Indian artifacts. His total collection contained approximately 600 pieces. About 18 pieces were from the Ashland, Virginia area, and 26 pieces were identified as artifacts from Kansas. The remainder of the collection came from in and around Washtenaw County, Michigan. Many pieces no doubt came from the George A. Thumm Farm on Section 13 at Tyler and Rawsonville Road.

As a matter of interest, it can be noted in the History of Washtenaw County by Chapman (1881), that in 1875, at the second annual meeting of the Pioneer Society of Washtenaw County, A. B. Covert and others presented 400 Indian relics and curiosities to the society. A. B. Covert, my paternal great grandfather, along with his brother, Ralph, had owned the entire northern half of section 13 since 1834. Possibly, many of those artifacts also came from section 13.

The Jacob A. Thumm collection contains pieces dating from 10,000–8000 B.C., the Paleo Indian era, to the present century. In 1991 and 1902, specific identification, as to type and age of the Indian artifacts in this collection was directed by Professor James Payne of the University of Michigan, Department of Anthropology. The Paleo-Indian pieces in the collection have been of special interest and detailed drawings were made of these particular arrow points by the department at the university.

The collection includes Indian artifacts consisting of ornaments, small stone tools, pecked and ground stone tools and projectile points and knives. Stone chert sources from the Great Lakes area are identified as to particular source location. Other educational material relating to this subject is also displayed in the Ypsilanti museum.

The lives of Jacob and Elizabeth Thumm were very closely entwined, almost as one. They planned together, worked together and lived for each other. The finale of either life could not occur until both had made their passage. Elizabeth (Sweitzer) Thumm passed away December 28, 1969, four years after Jake. Honoring their previous agreement, substantial portions of the Thumm estate were left to Emmanuel Lutheran church of Ypsilanti and to the Odd Fellows-Rebekah Home in Jackson, Michigan.