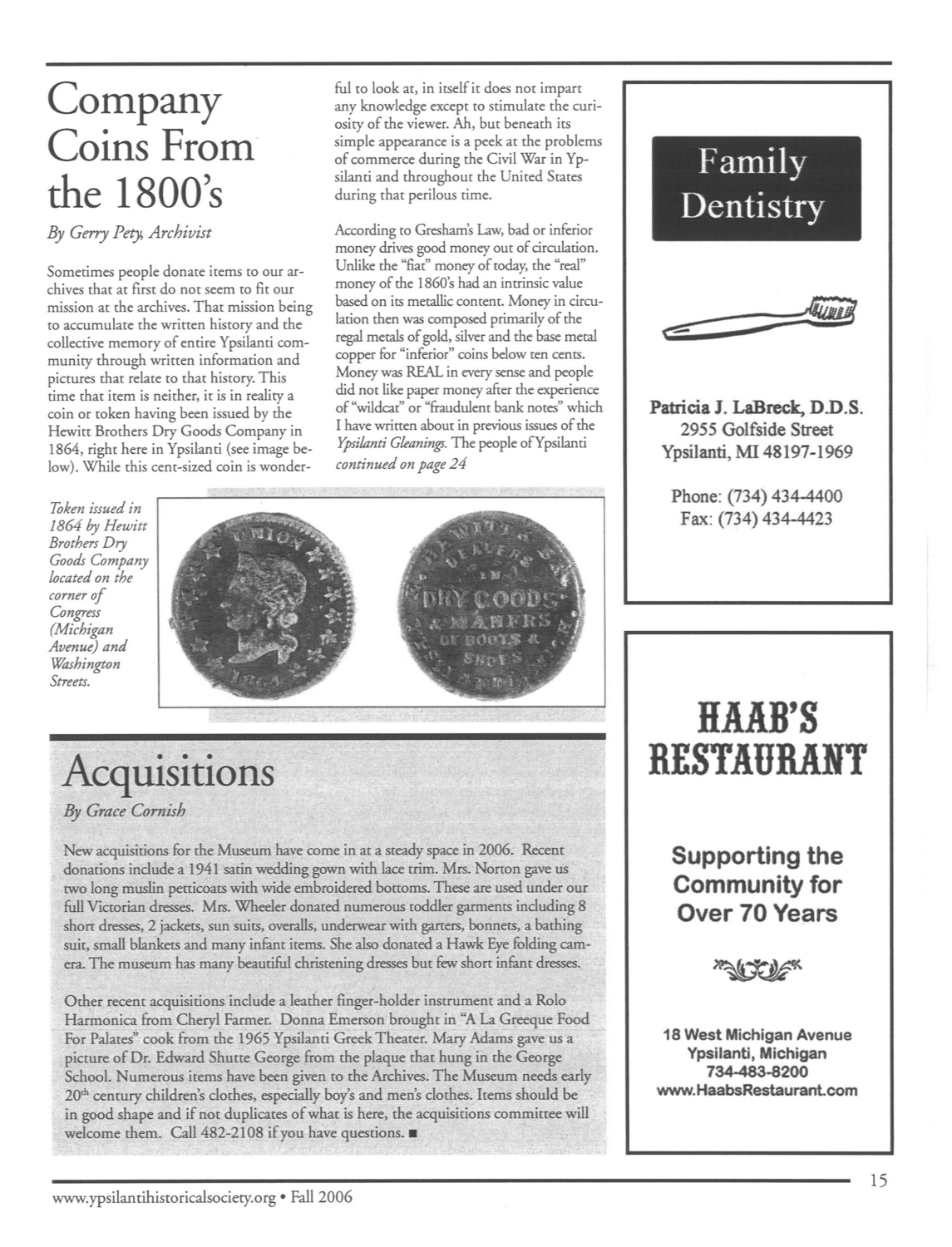 Sometimes people donate items to our archives that at first do not seem to fit our mission at the archives. That mission being to accumulate the written history and the collective memory of entire Ypsilanti community through written information and pictures that relate to that history. This time that item is neither, it is in reality a coin or token having been issued by the Hewitt Brothers Dry Goods Company in 1864, right here in Ypsilanti (see image below). While this cent-sized coin is wonderful to look at, in itself it does not impart any knowledge except to stimulate the curiosity of the viewer. Ah, but beneath its simple appearance is a peek at the problems of commerce during the Civil War in Ypsilanti and throughout the United States during that perilous time.

According to Gresham's Law, bad or inferior money drives good money out of circulation. Unlike the “fiat” money of today, the “real” money of the 1860's had an intrinsic value based on its metallic content. Money in circulation then was composed primarily of the regal metals of gold, silver and the base metal copper for “inferior” coins below ten cents. Money was Real in every sense and people did not like paper money after the experience of “wildcat” or “fraudulent bank notes” which I have written about in previous issues of the Ypsilanti Gleanings. The people of Ypsilanti had been stung badly with the fraudulent Bank of Ypsilanti notes some 30 years before and other “funny” money issued by insolvent banks. The U.S. Constitution required that gold and silver be the only means of payment allowed in the United States and there was just not enough of these metals available to facilitate trade with all of the hoarding of “real” money.

When the Civil War broke out in 1861 between the states, one of the first problems was the vanishing supply of “real” money. Coins disappeared rapidly and the exchange function of money was dependent on the ingenuity of the merchants of the area. And that is what we have here to behold some 143 years later! While the bulk of transactions could be handled by checks, postage stamps and paper money and barter, how do you make change for a nickel on a three cent sale? Simple, you give the customer change in coins from your own company! That is what Hewitt Brothers did from 1863 until the end of the war. These coins were good advertising for the company concerned and it was a necessary medium of exchange. The Hewitt Brothers Dry Goods Company was located on the corner of Congress (Michigan Avenue) and Washington Streets and they existed as a business enterprise for many years. The only other company to circulate these types of tokens in Ypsilanti was Showerman & Brothers Company, also purveyors of dry goods, clothing and boots and shoes.

Oh yes, the U.S. Congress passed a law in 1864 to make all private tokens illegal, but company coins circulated until well after the war when “real” money was again plentiful. Over 25 million company coins were made in the North and many of them are now in private collections. And yes, these coins are now worth much more than a cent a piece!