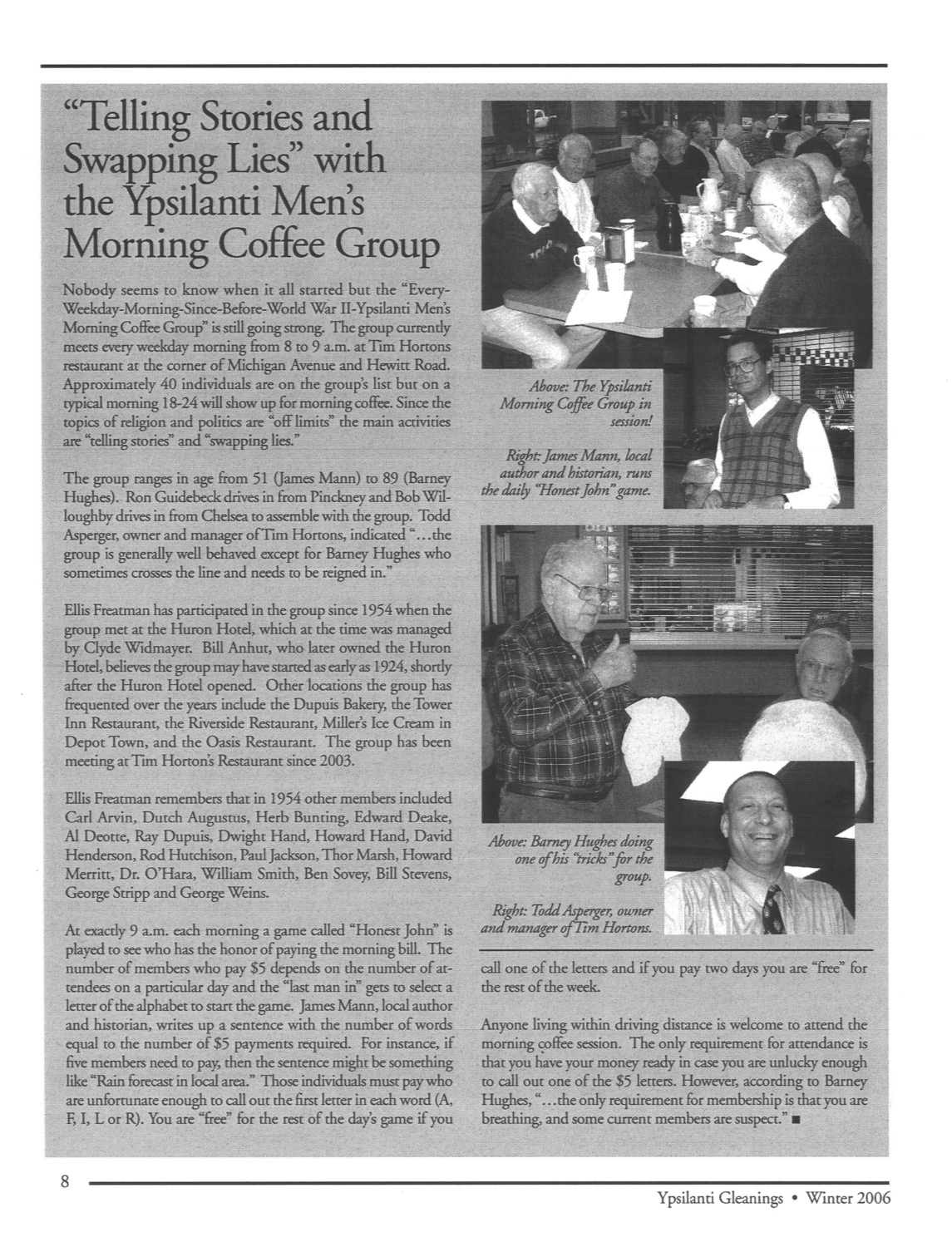 Nobody seems to know when it all started but the “Every-Weekday-Morning-Since-Before-World War II-Ypsilanti Men's Morning Coffee Group” is still going strong. The group currently meets every weekday morning from 8 to 9 a.m. at Tim Hortons restaurant at the corner of Michigan Avenue and Hewitt Road. Approximately 40 individuals are on the group's list but on a typical morning 18–24 will show up for morning coffee. Since the topics of religion and politics are “off limits” the main activities are “telling stories” and “swapping lies.”

The group ranges in age from 51 (James Mann) to 89 (Barney Hughes). Ron Guidebeck drives in from Pinckney and Bob Willoughby drives in from Chelsea to assemble with the group. Todd Asperger, owner and manager of Tim Hortons, indicated”…the group is generally well behaved except for Barney Hughes who sometimes crosses the line and needs to be reigned in.”

At exactly 9 a.m. each morning a game called “Honest John” is played to see who has the honor of paying the morning bill. The number of members who pay &dollar;5 depends on the number of attendees on a particular day and the “last man in” gets to select a letter of the alphabet to start the game. James Mann, local author and historian, writes up a sentence with the number of words equal to the number of &dollar;5 payments required. For instance, if five members need to pay, then the sentence might be something like “Rain forecast in local area.” Those individuals must pay who are unfortunate enough to call out the first letter in each word (A, F, I, L or R). You are “free” for the rest of the day's game if you call one of the letters and if you pay two days you are “free” for the rest of the week.

Anyone living within driving distance is welcome to attend the morning coffee session. The only requirement for attendance is that you have your money ready in case you are unlucky enough to call out one of the &dollar;5 letters. However, according to Barney Hughes,”…the only requirement for membership is that you are breathing, and some current members are suspect.”