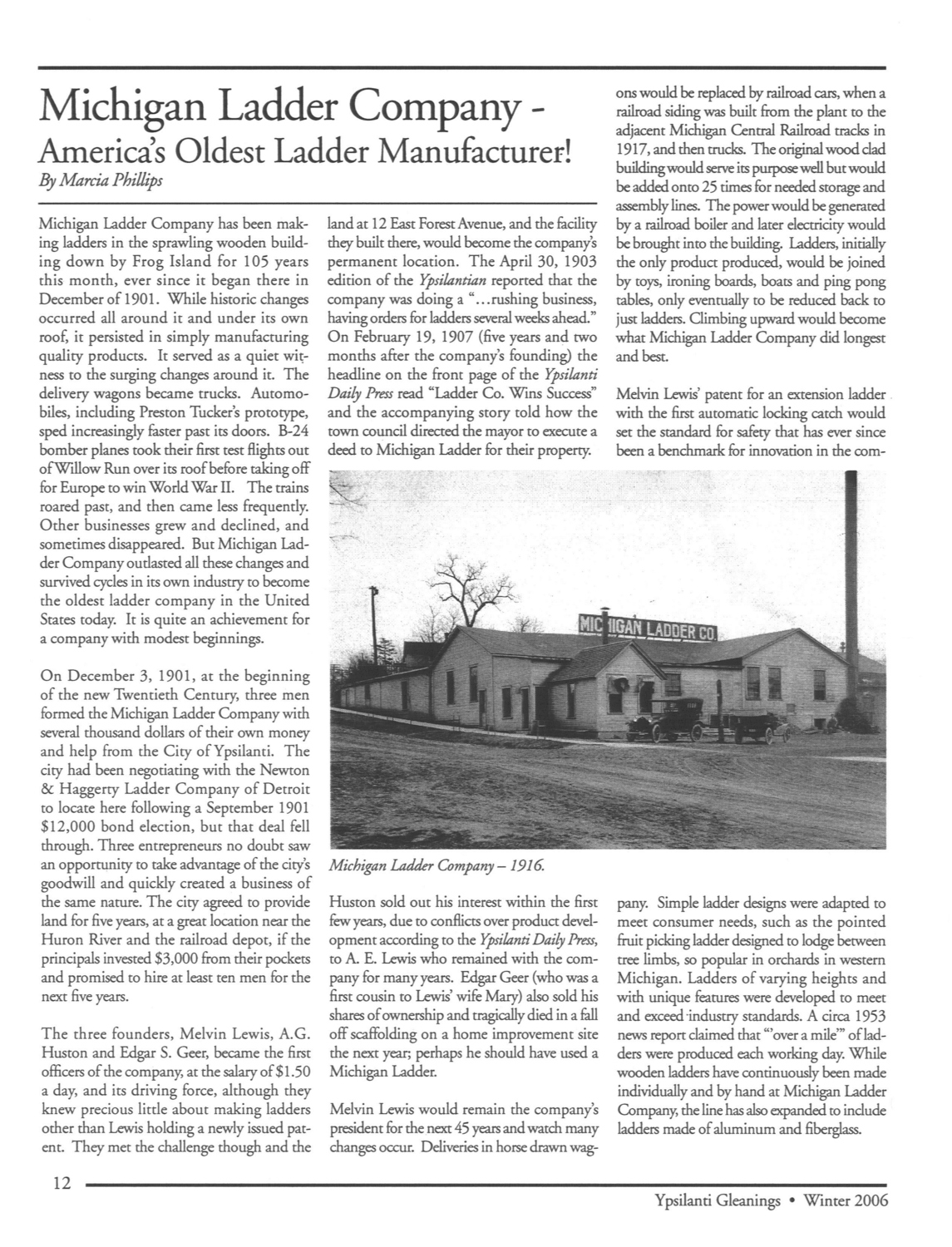 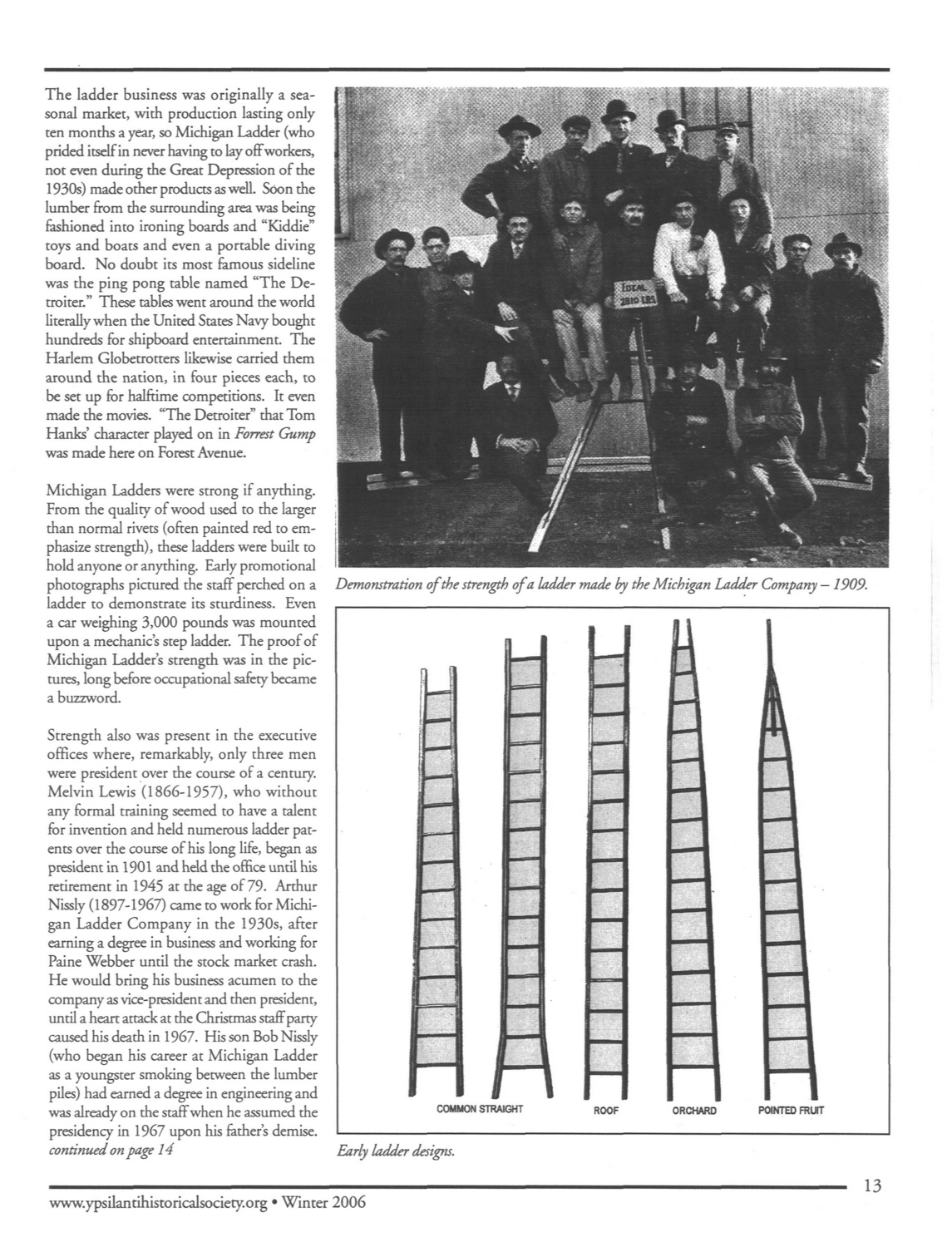 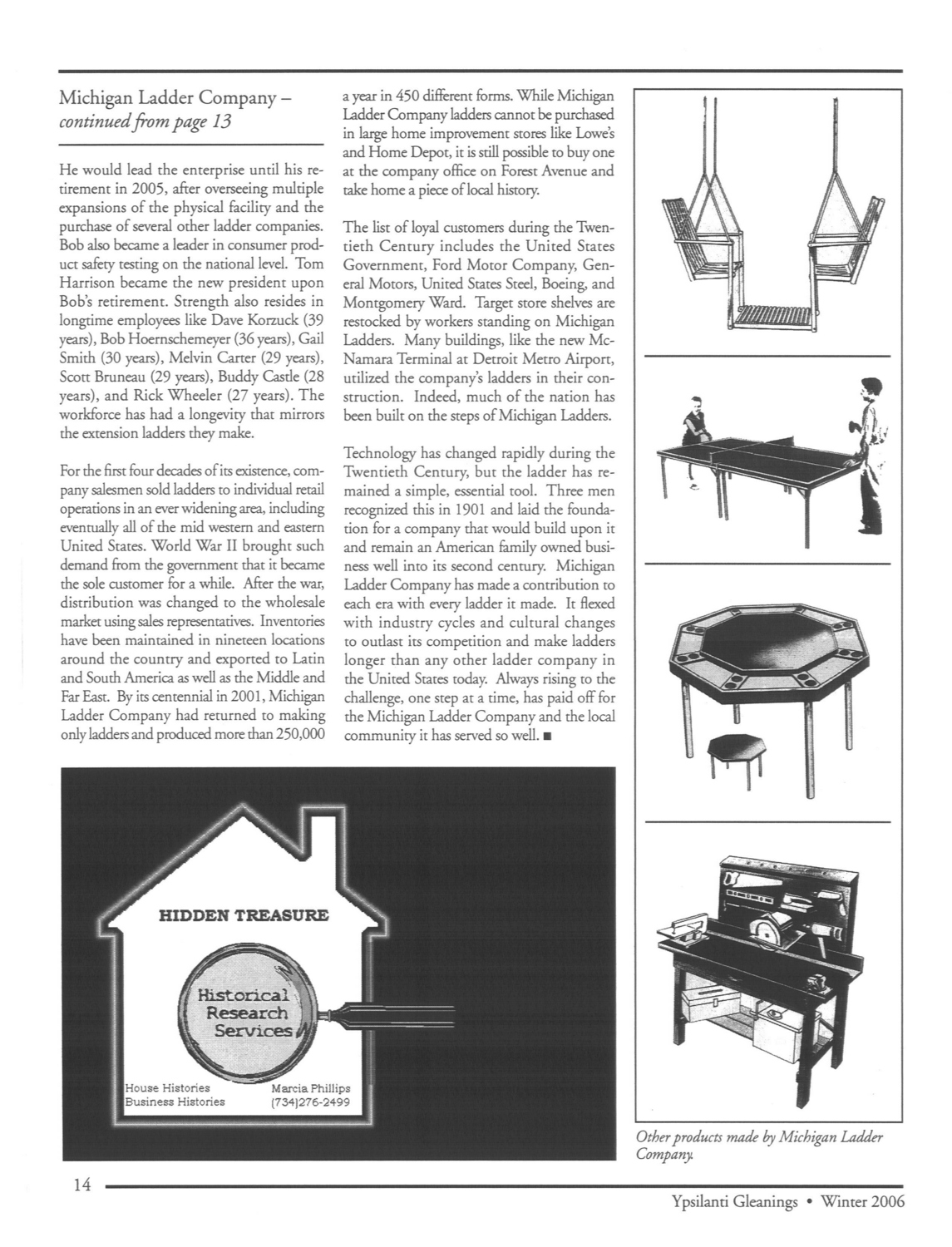 Michigan Ladder Company has been making ladders in the sprawling wooden building down by Frog Island for 105 years this month, ever since it began there in December of 1901. While historic changes occurred all around it and under its own roof, it persisted in simply manufacturing quality products. It served as a quiet witness to the surging changes around it. The delivery wagons became trucks. Automobiles, including Preston Tucker's prototype, sped increasingly faster past its doors. B-24 bomber planes took their first test flights out of Willow Run over its roof before taking off for Europe to win World War II. The trains roared past, and then came less frequently. Other businesses grew and declined, and sometimes disappeared. But Michigan Ladder Company outlasted all these changes and survived cycles in its own industry to become the oldest ladder company in the United States today. It is quite an achievement for a company with modest beginnings.

On December 3, 1901, at the beginning of the new Twentieth Century, three men formed the Michigan Ladder Company with several thousand dollars of their own money and help from the City of Ypsilanti. The city had been negotiating with the Newton & Haggerty Ladder Company of Detroit to locate here following a September 1901 &dollar;12,000 bond election, but that deal fell through. Three entrepreneurs no doubt saw an opportunity to take advantage of the city's goodwill and quickly created a business of the same nature. The city agreed to provide land for five years, at a great location near the Huron River and the railroad depot, if the principals invested &dollar;3,000 from their pockets and promised to hire at least ten men for the next five years.

The three founders, Melvin Lewis, A.G. Huston and Edgar S. Geer, became the first officers of the company, at the salary of &dollar;1.50 a day, and its driving force, although they knew precious little about making ladders other than Lewis holding a newly issued patent. They met the challenge though and the land at 12 East Forest Avenue, and the facility they built there, would become the company's permanent location. The April 30, 1903 edition of the Ypsilantian reported that the company was doing a”…rushing business, having orders for ladders several weeks ahead.” On February 19, 1907 (five years and two months after the company's founding) the headline on the front page of the Ypsilanti Daily Press read “Ladder Co. Wins Success” and the accompanying story told how the town council directed the mayor to execute a deed to Michigan Ladder for their property. Huston sold out his interest within the first few years, due to conflicts over product development according to the Ypsilanti Daily Press, to A. E. Lewis who remained with the company for many years. Edgar Geer (who was a first cousin to Lewis' wife Mary) also sold his shares of ownership and tragically died in a fall off scaffolding on a home improvement site the next year; perhaps he should have used a Michigan Ladder.

Melvin Lewis would remain the company's president for the next 45 years and watch many changes occur. Deliveries in horse drawn wagons would be replaced by railroad cars, when a railroad siding was built from the plant to the adjacent Michigan Central Railroad tracks in 1917, and then trucks. The original wood clad building would serve its purpose well but would be added onto 25 times for needed storage and assembly lines. The power would be generated by a railroad boiler and later electricity would be brought into the building. Ladders, initially the only product produced, would be joined by toys, ironing boards, boats and ping pong tables, only eventually to be reduced back to just ladders. Climbing upward would become what Michigan Ladder Company did longest and best.

Melvin Lewis' patent for an extension ladder with the first automatic locking catch would set the standard for safety that has ever since been a benchmark for innovation in the company. Simple ladder designs were adapted to meet consumer needs, such as the pointed fruit picking ladder designed to lodge between tree limbs, so popular in orchards in western Michigan. Ladders of varying heights and with unique features were developed to meet and exceed industry standards. A circa 1953 news report claimed that “‘over a mile’” of ladders were produced each working day. While wooden ladders have continuously been made individually and by hand at Michigan Ladder Company, the line has also expanded to include ladders made of aluminum and fiberglass.

The ladder business was originally a seasonal market, with production lasting only ten months a year, so Michigan Ladder (who prided itself in never having to lay off workers, not even during the Great Depression of the 1930s) made other products as well. Soon the lumber from the surrounding area was being fashioned into ironing boards and “Kiddie” toys and boats and even a portable diving board. No doubt its most famous sideline was the ping pong table named “The Detroiter.” These tables went around the world literally when the United States Navy bought hundreds for shipboard entertainment. The Harlem Globetrotters likewise carried them around the nation, in four pieces each, to be set up for halftime competitions. It even made the movies. “The Detroiter” that Tom Hanks' character played on in Forrest Gump was made here on Forest Avenue.

Michigan Ladders were strong if anything. From the quality of wood used to the larger than normal rivets (often painted red to emphasize strength), these ladders were built to hold anyone or anything. Early promotional photographs pictured the staff perched on a ladder to demonstrate its sturdiness. Even a car weighing 3,000 pounds was mounted upon a mechanic's step ladder. The proof of Michigan Ladder's strength was in the pictures, long before occupational safety became a buzzword.

Strength also was present in the executive offices where, remarkably, only three men were president over the course of a century. Melvin Lewis (1866–1957), who without any formal training seemed to have a talent for invention and held numerous ladder patents over the course of his long life, began as president in 1901 and held the office until his retirement in 1945 at the age of 79. Arthur Nissly (1897–1967) came to work for Michigan Ladder Company in the 1930s, after earning a degree in business and working for Paine Webber until the stock market crash. He would bring his business acumen to the company as vice-president and then president, until a heart attack at the Christmas staff party caused his death in 1967. His son Bob Nissly (who began his career at Michigan Ladder as a youngster smoking between the lumber piles) had earned a degree in engineering and was already on the staff when he assumed the presidency in 1967 upon his father's demise.

He would lead the enterprise until his retirement in 2005, after overseeing multiple expansions of the physical facility and the purchase of several other ladder companies. Bob also became a leader in consumer product safety testing on the national level. Tom Harrison became the new president upon Bob's retirement. Strength also resides in longtime employees like Dave Korzuck (39 years), Bob Hoernschemeyer (36 years), Gail Smith (30 years), Melvin Carter (29 years), Scott Bruneau (29 years), Buddy Castle (28 years), and Rick Wheeler (27 years). The workforce has had a longevity that mirrors the extension ladders they make.

For the first four decades of its existence, company salesmen sold ladders to individual retail operations in an ever widening area, including eventually all of the mid western and eastern United States. World War II brought such demand from the government that it became the sole customer for a while. After the war, distribution was changed to the wholesale market using sales representatives. Inventories have been maintained in nineteen locations around the country and exported to Latin and South America as well as the Middle and Far East. By its centennial in 2001, Michigan Ladder Company had returned to making only ladders and produced more than 250,000 a year in 450 different forms. While Michigan Ladder Company ladders cannot be purchased in large home improvement stores like Lowe's and Home Depot, it is still possible to buy one at the company office on Forest Avenue and take home a piece of local history.

The list of loyal customers during the Twentieth Century includes the United States Government, Ford Motor Company, General Motors, United States Steel, Boeing, and Montgomery Ward. Target store shelves are restocked by workers standing on Michigan Ladders. Many buildings, like the new McNamara Terminal at Detroit Metro Airport, utilized the company's ladders in their construction. Indeed, much of the nation has been built on the steps of Michigan Ladders.

Technology has changed rapidly during the Twentieth Century, but the ladder has remained a simple, essential tool. Three men recognized this in 1901 and laid the foundation for a company that would build upon it and remain an American family owned business well into its second century. Michigan Ladder Company has made a contribution to each era with every ladder it made. It flexed with industry cycles and cultural changes to outlast its competition and make ladders longer than any other ladder company in the United States today. Always rising to the challenge, one step at a time, has paid off for the Michigan Ladder Company and the local community it has served so well.