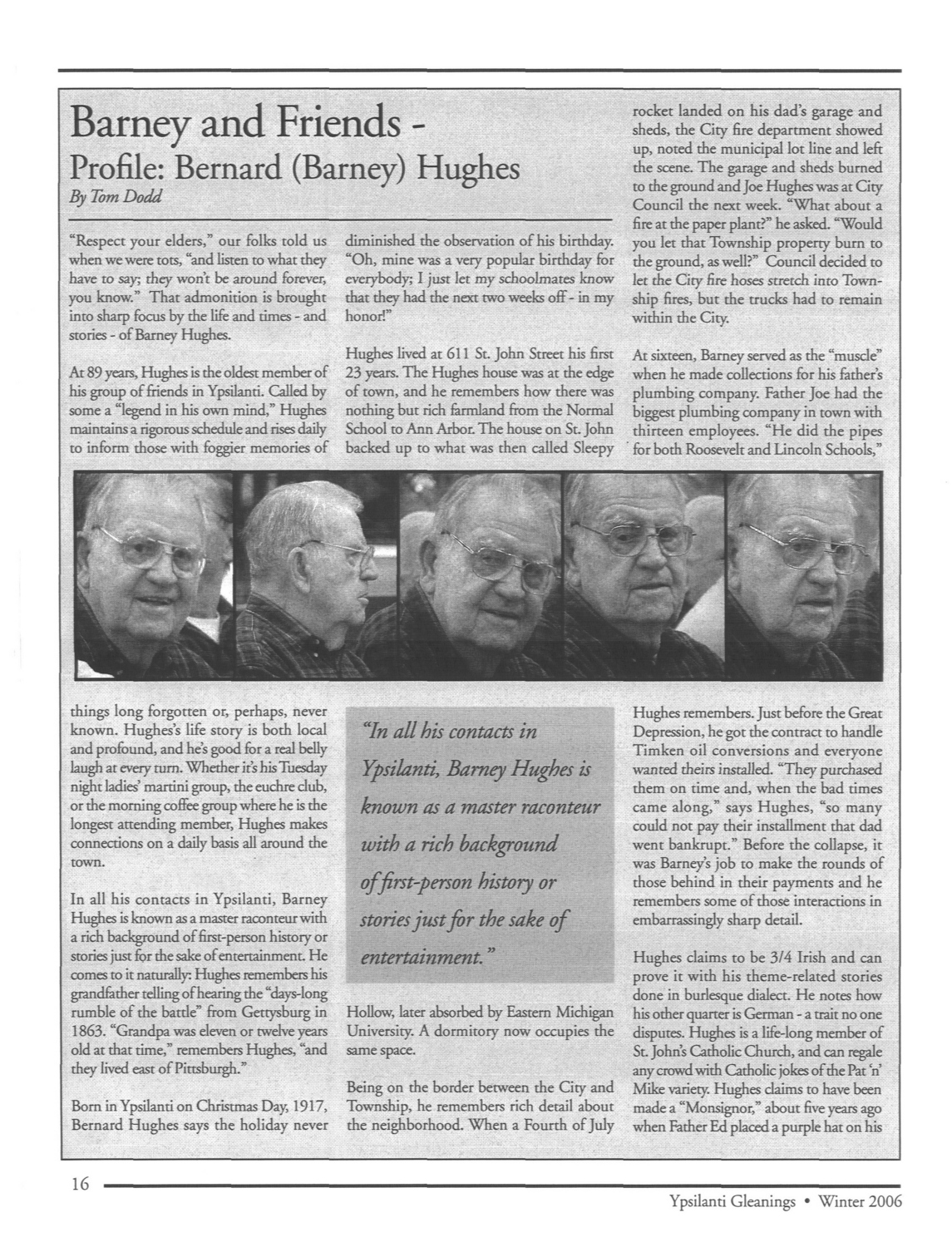 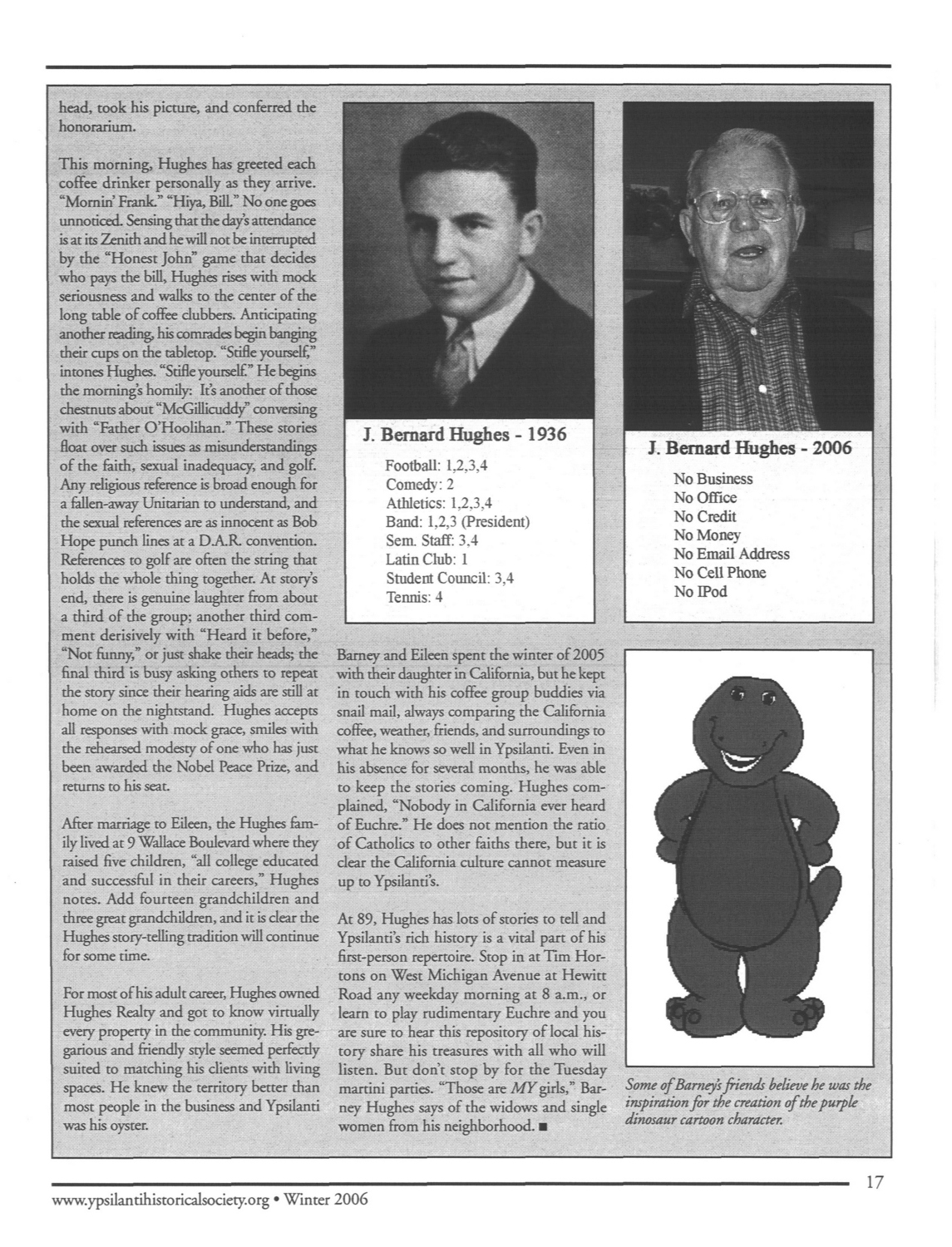 “Respect your elders,” our folks told us when we were tots, “and listen to what they have to say; they won't be around forever, you know.” That admonition is brought into sharp focus by the life and times-and stories-of Barney Hughes.

At 89 years, Hughes is the oldest member of his group of friends in Ypsilanti. Called by some a “legend in his own mind,” Hughes maintains a rigorous schedule and rises daily to inform those with foggier memories of things long forgotten or, perhaps, never known. Hughes's life story is both local and profound, and he's good for a real belly laugh at every turn. Whether it's his Tuesday night ladies' martini group, the euchre club, or the morning coffee group where he is the longest attending member, Hughes makes connections on a daily basis all around the town.

In all his contacts in Ypsilanti, Barney Hughes is known as a master raconteur with a rich background of first-person history or stories just for the sake of entertainment. He comes to it naturally: Hughes remembers his grandfather telling of hearing the “days-long rumble of the battle” from Gettysburg in 1863. “Grandpa was eleven or twelve years old at that time,” remembers Hughes, “and they lived east of Pittsburgh.”

Born in Ypsilanti on Christmas Day, 1917, Bernard Hughes says the holiday never diminished the observation of his birthday. “Oh, mine was a very popular birthday for everybody; I just let my schoolmates know that they had the next two weeks off-in my honor!”

Hughes lived at 611 St. John Street his first 23 years. The Hughes house was at the edge of town, and he remembers how there was nothing but rich farmland from the Normal School to Ann Arbor. The house on St. John backed up to what was then called Sleepy Hollow, later absorbed by Eastern Michigan University. A dormitory now occupies the same space.

“In all his contacts in Ypsilanti, Barney Hughes is known as a master raconteur with a rich background of first-person history or stories just for the sake of entertainment.”

Being on the border between the City and Township, he remembers rich detail about the neighborhood. When a Fourth of July rocket landed on his dad's garage and sheds, the City fire department showed up, noted the municipal lot line and left the scene. The garage and sheds burned to the ground and Joe Hughes was at City Council the next week. “What about a fire at the paper plant?” he asked. “Would you let that Township property burn to the ground, as well?” Council decided to let the City fire hoses stretch into Township fires, but the trucks had to remain within the City.

At sixteen, Barney served as the “muscle” when he made collections for his father's plumbing company. Father Joe had the biggest plumbing company in town with thirteen employees. “He did the pipes for both Roosevelt and Lincoln Schools,” Hughes remembers. Just before the Great Depression, he got the contract to handle Timken oil conversions and everyone wanted theirs installed. “They purchased them on time and, when the bad times came along,” says Hughes, “so many could not pay their installment that dad went bankrupt.” Before the collapse, it was Barney's job to make the rounds of those behind in their payments and he remembers some of those interactions in embarrassingly sharp detail.

Hughes claims to be 3/4 Irish and can prove it with his theme-related stories done in burlesque dialect. He notes how his other quarter is German-a trait no one disputes. Hughes is a life-long member of St. John's Catholic Church, and can regale any crowd with Catholic jokes of the Pat ‘n’ Mike variety. Hughes claims to have been made a “Monsignor,” about five years ago when Father Ed placed a purple hat on his head, took his picture, and conferred the honorarium.

This morning, Hughes has greeted each coffee drinker personally as they arrive. “Mornin' Frank.” “Hiya, Bill.” No one goes unnoticed. Sensing that the day's attendance is at its Zenith and he will not be interrupted by the “Honest John” game that decides who pays the bill, Hughes rises with mock seriousness and walks to the center of the long table of coffee clubbers. Anticipating another reading, his comrades begin banging their cups on the tabletop. “Stifle yourself,” intones Hughes. “Stifle yourself.” He begins the morning's homily: It's another of those chestnuts about “McGillicuddy” conversing with “Father O'Hoolihan.” These stories float over such issues as misunderstandings of the faith, sexual inadequacy, and golf. Any religious reference is broad enough for a fallen-away Unitarian to understand, and the sexual references are as innocent as Bob Hope punch lines at a D.A.R. convention. References to golf are often the string that holds the whole thing together. At story's end, there is genuine laughter from about a third of the group; another third comment derisively with “Heard it before,” “Not funny,” or just shake their heads; the final third is busy asking others to repeat the story since their hearing aids are still at home on the nightstand. Hughes accepts all responses with mock grace, smiles with the rehearsed modesty of one who has just been awarded the Nobel Peace Prize, and returns to his seat.

After marriage to Eileen, the Hughes family lived at 9 Wallace Boulevard where they raised five children, “all college educated and successful in their careers,” Hughes notes. Add fourteen grandchildren and three great grandchildren, and it is clear the Hughes story-telling tradition will continue for some time.

For most of his adult career, Hughes owned Hughes Realty and got to know virtually every property in the community. His gregarious and friendly style seemed perfectly suited to matching his clients with living spaces. He knew the territory better than most people in the business and Ypsilanti was his oyster.

Barney and Eileen spent the winter of 2005 with their daughter in California, but he kept in touch with his coffee group buddies via snail mail, always comparing the California coffee, weather, friends, and surroundings to what he knows so well in Ypsilanti. Even in his absence for several months, he was able to keep the stories coming. Hughes complained, “Nobody in California ever heard of Euchre.” He does not mention the ratio of Catholics to other faiths there, but it is clear the California culture cannot measure up to Ypsilanti's.

At 89, Hughes has lots of stories to tell and Ypsilanti's rich history is a vital part of his first-person repertoire. Stop in at Tim Hortons on West Michigan Avenue at Hewitt Road any weekday morning at 8 a.m., or learn to play rudimentary Euchre and you are sure to hear this repository of local history share his treasures with all who will listen. But don't stop by for the Tuesday martini parties. “Those are MY girls,” Barney Hughes says of the widows and single women from his neighborhood.