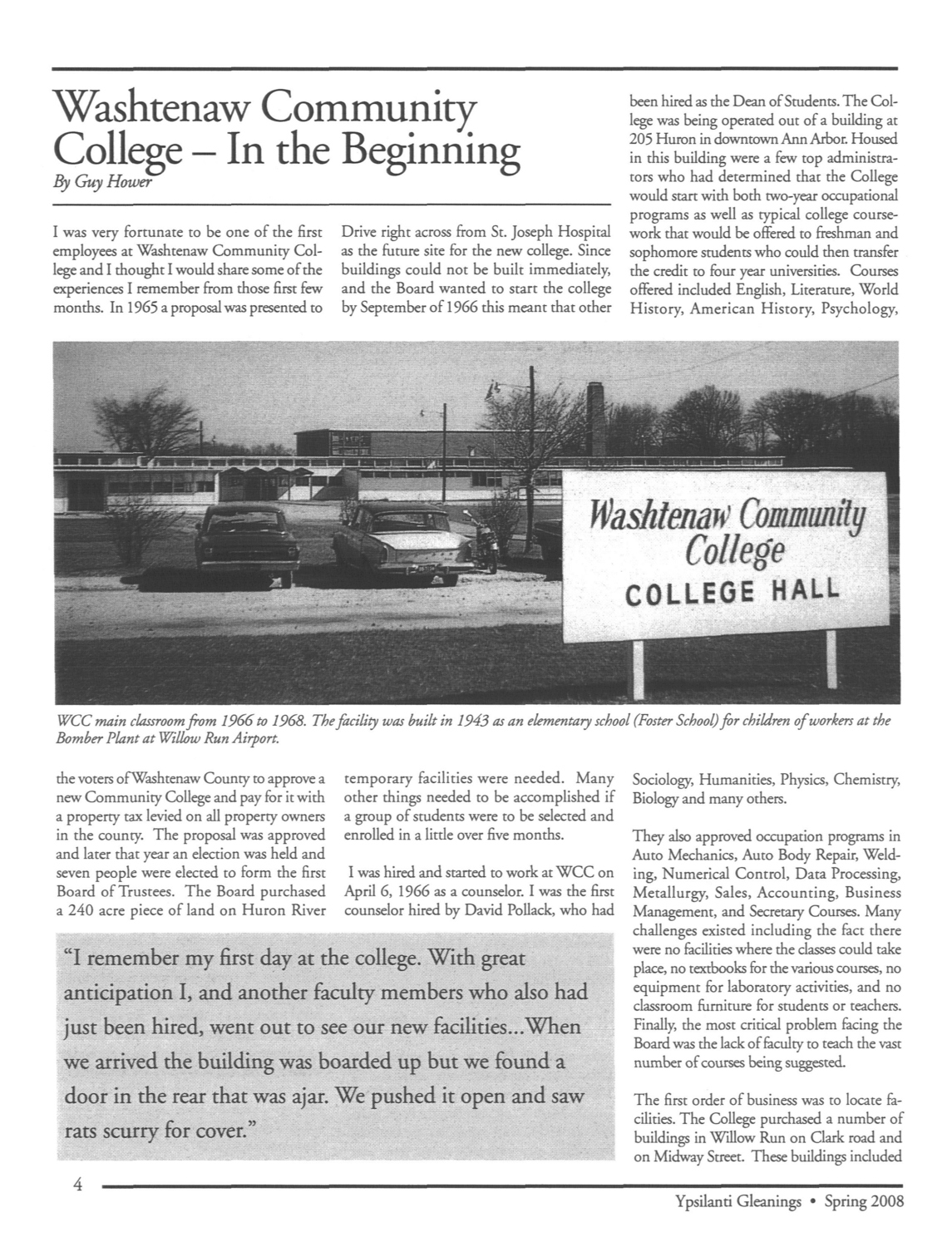 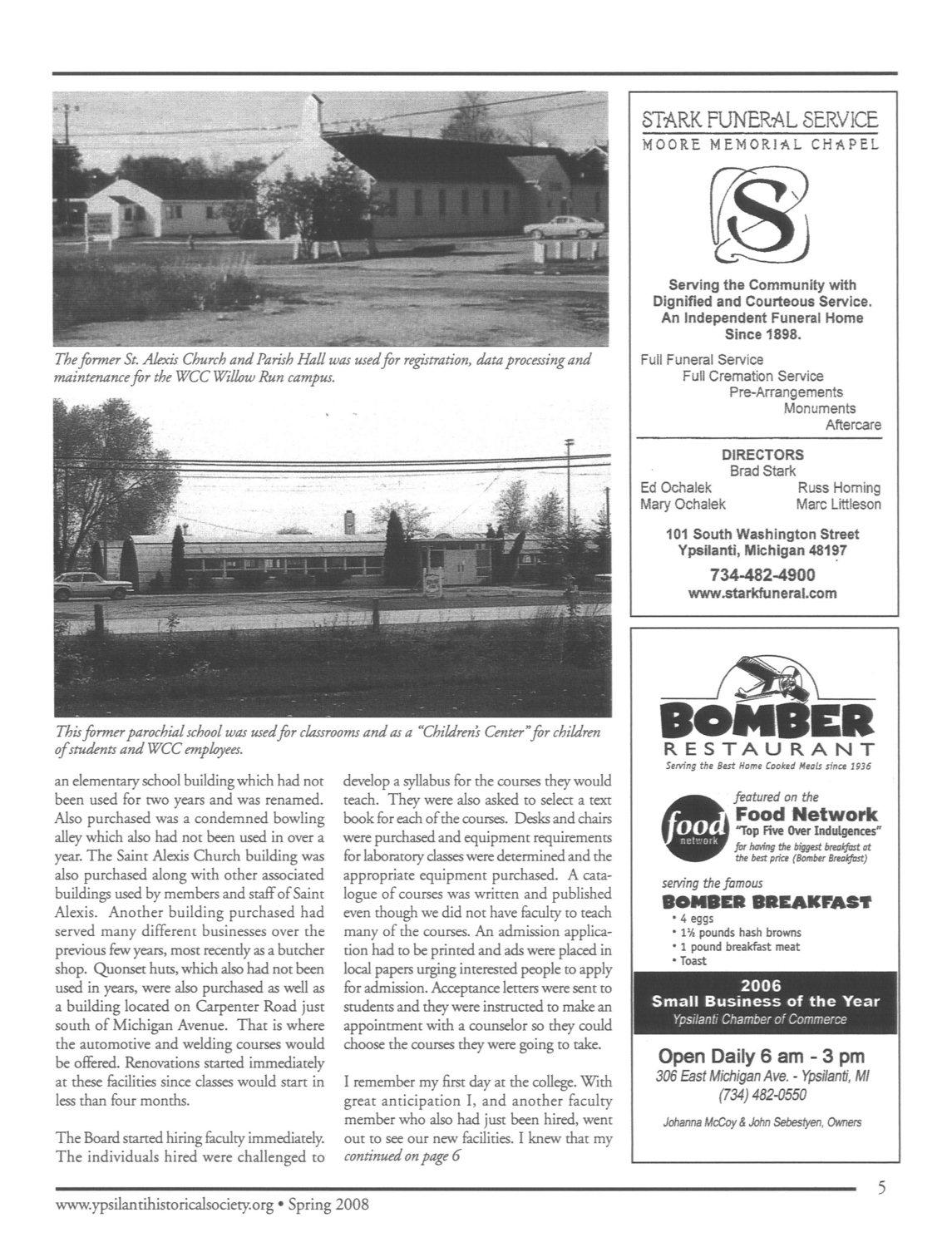 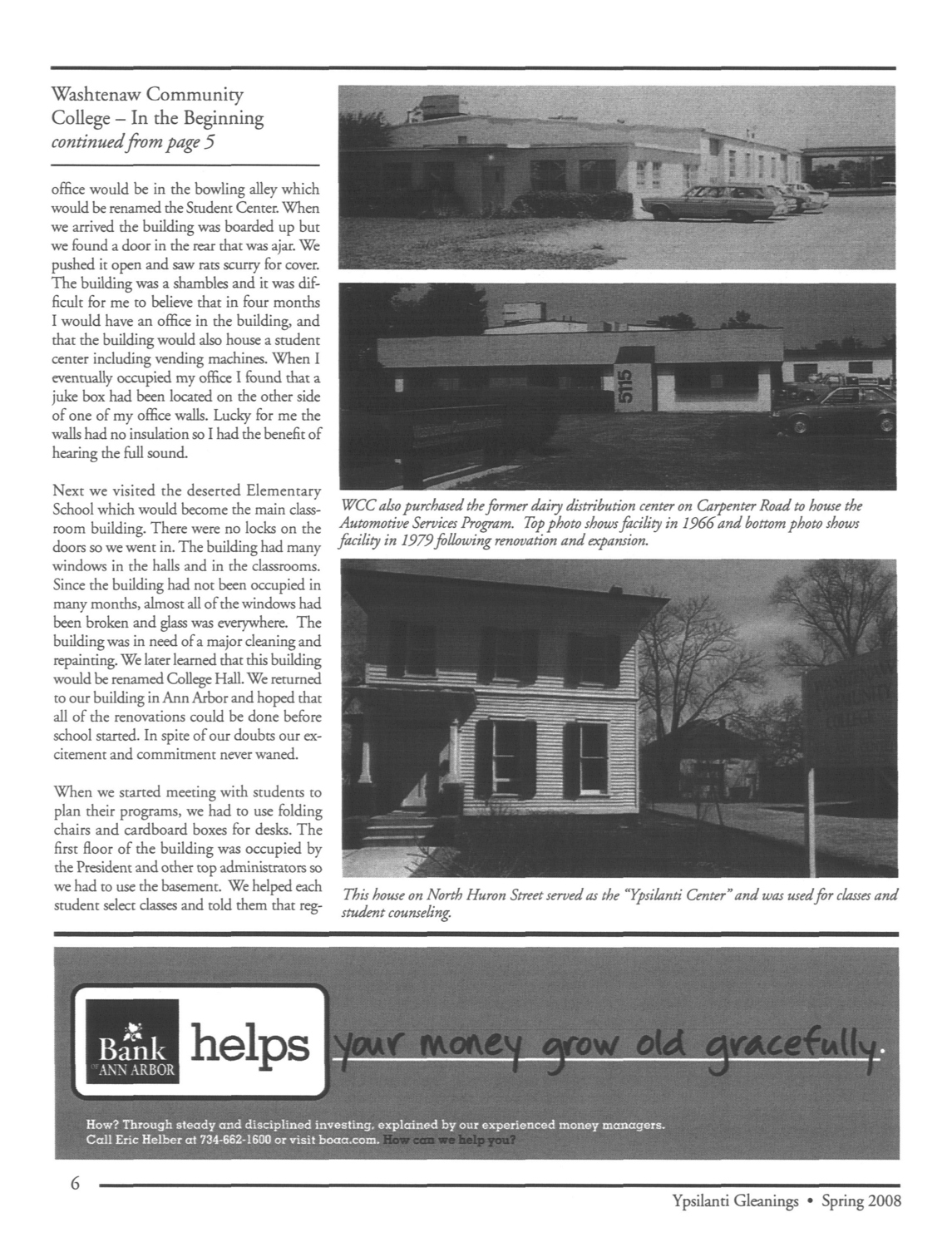 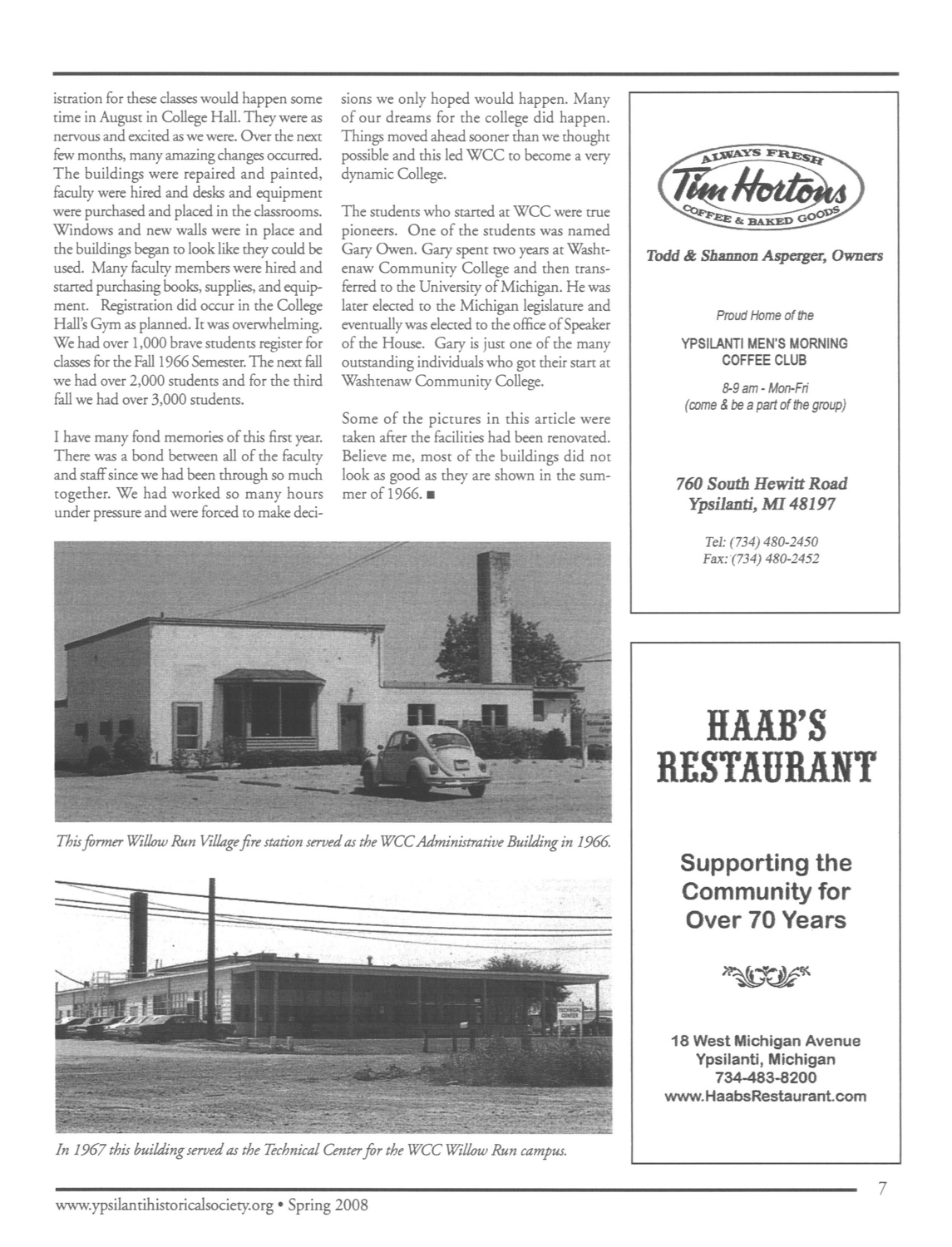 I was very fortunate to be one of the first employees at Washtenaw Community College and I thought I would share some of the experiences I remember from those first few months. In 1965 a proposal was presented to the voters of Washtenaw County to approve a new Community College and pay for it with a property tax levied on all property owners in the county. The proposal was approved and later that year an election was held and seven people were elected to form the first Board of Trustees. The Board purchased a 240 acre piece of land on Huron River Drive right across from St. Joseph Hospital as the future site for the new college. Since buildings could not be built immediately, and the Board wanted to start the college by September of 1966 this meant that other temporary facilities were needed. Many other things needed to be accomplished if a group of students were to be selected and enrolled in a little over five months.

WCC main classroom from 1966 to 1968. The facility was built in 1943 as an elementary school (Foster School) for children of workers at the Bomber Plant at Willow Run Airport.

I was hired and started to work at WCC on April 6, 1966 as a counselor. I was the first counselor hired by David Pollack, who had been hired as the Dean of Students. The College was being operated out of a building at 205 Huron in downtown Ann Arbor. Housed in this building were a few top administrators who had determined that the College would start with both two-year occupational programs as well as typical college course-work that would be offered to freshman and sophomore students who could then transfer the credit to four year universities. Courses offered included English, Literature, World History, American History, Psychology, Sociology, Humanities, Physics, Chemistry, Biology and many others.

“I remember my first day at the college. With great anticipation I, and another faculty members who also had just been hired, went out to see our new facilities…When we arrived the building was boarded up but we found a door in the rear that was ajar. We pushed it open and saw rats scurry for cover.”

They also approved occupation programs in Auto Mechanics, Auto Body Repair, Welding, Numerical Control, Data Processing, Metallurgy, Sales, Accounting, Business Management, and Secretary Courses. Many challenges existed including the fact there were no facilities where the classes could take place, no textbooks for the various courses, no equipment for laboratory activities, and no classroom furniture for students or teachers. Finally, the most critical problem facing the Board was the lack of faculty to teach the vast number of courses being suggested.

The first order of business was to locate facilities. The College purchased a number of buildings in Willow Run on Clark road and on Midway Street. These buildings included an elementary school building which had not been used for two years and was renamed. Also purchased was a condemned bowling alley which also had not been used in over a year. The Saint Alexis Church building was also purchased along with other associated buildings used by members and staff of Saint Alexis. Another building purchased had served many different businesses over the previous few years, most recently as a butcher shop. Quonset huts, which also had not been used in years, were also purchased as well as a building located on Carpenter Road just south of Michigan Avenue. That is where the automotive and welding courses would be offered. Renovations started immediately at these facilities since classes would start in less than four months.

The former St. Alexis Church and Parish Hall was used for registration, data processing and maintenance for the WCC Willow Run campus.

This former parochial school was used for classrooms and as a “Children's Center” for children of students and WCC employees.

The Board started hiring faculty immediately. The individuals hired were challenged to develop a syllabus for the courses they would teach. They were also asked to select a text book for each of the courses. Desks and chairs were purchased and equipment requirements for laboratory classes were determined and the appropriate equipment purchased. A catalogue of courses was written and published even though we did not have faculty to teach many of the courses. An admission application had to be printed and ads were placed in local papers urging interested people to apply for admission. Acceptance letters were sent to students and they were instructed to make an appointment with a counselor so they could choose the courses they were going to take.

I remember my first day at the college. With great anticipation I, and another faculty member who also had just been hired, went out to see our new facilities. I knew that my office would be in the bowling alley which would be renamed the Student Center. When we arrived the building was boarded up but we found a door in the rear that was ajar. We pushed it open and saw rats scurry for cover. The building was a shambles and it was difficult for me to believe that in four months I would have an office in the building, and that the building would also house a student center including vending machines. When I eventually occupied my office I found that a juke box had been located on the other side of one of my office walls. Lucky for me the walls had no insulation so I had the benefit of hearing the full sound.

Next we visited the deserted Elementary School which would become the main classroom building. There were no locks on the doors so we went in. The building had many windows in the halls and in the classrooms. Since the building had not been occupied in many months, almost all of the windows had been broken and glass was everywhere. The building was in need of a major cleaning and repainting. We later learned that this building would be renamed College Hall. We returned to our building in Ann Arbor and hoped that all of the renovations could be done before school started. In spite of our doubts our excitement and commitment never waned.

This house on North Huron Street served as the “Ypsilanti Center” and was used for classes and student counseling.

When we started meeting with students to plan their programs, we had to use folding chairs and cardboard boxes for desks. The first floor of the building was occupied by the President and other top administrators so we had to use the basement. We helped each student select classes and told them that registration for these classes would happen some time in August in College Hall. They were as nervous and excited as we were. Over the next few months, many amazing changes occurred. The buildings were repaired and painted, faculty were hired and desks and equipment were purchased and placed in the classrooms. Windows and new walls were in place and the buildings began to look like they could be used. Many faculty members were hired and started purchasing books, supplies, and equipment. Registration did occur in the College Hall's Gym as planned. It was overwhelming. We had over 1,000 brave students register for classes for the Fall 1966 Semester. The next fall we had over 2,000 students and for the third fall we had over 3,000 students.

I have many fond memories of this first year. There was a bond between all of the faculty and staff since we had been through so much together. We had worked so many hours under pressure and were forced to make decisions we only hoped would happen. Many of our dreams for the college did happen. Things moved ahead sooner than we thought possible and this led WCC to become a very dynamic College.

The students who started at WCC were true pioneers. One of the students was named Gary Owen. Gary spent two years at Washtenaw Community College and then transferred to the University of Michigan. He was later elected to the Michigan legislature and eventually was elected to the office of Speaker of the House. Gary is just one of the many outstanding individuals who got their start at Washtenaw Community College.

Some of the pictures in this article were taken after the facilities had been renovated. Believe me, most of the buildings did not look as good as they are shown in the summer of 1966.

In 1967 this building served as the Technical Center for the WCC Willow Run campus.