The "New" Old West Side 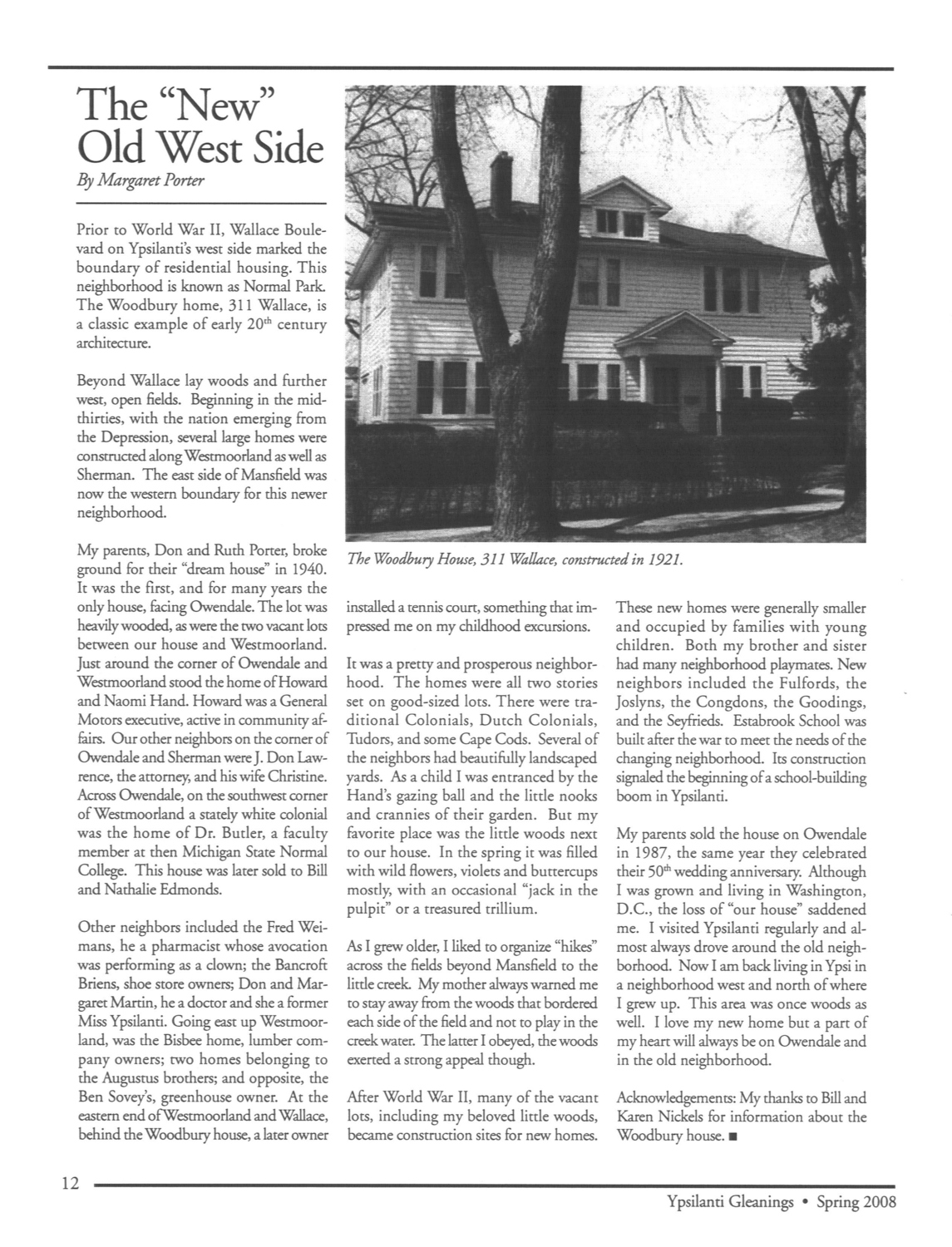 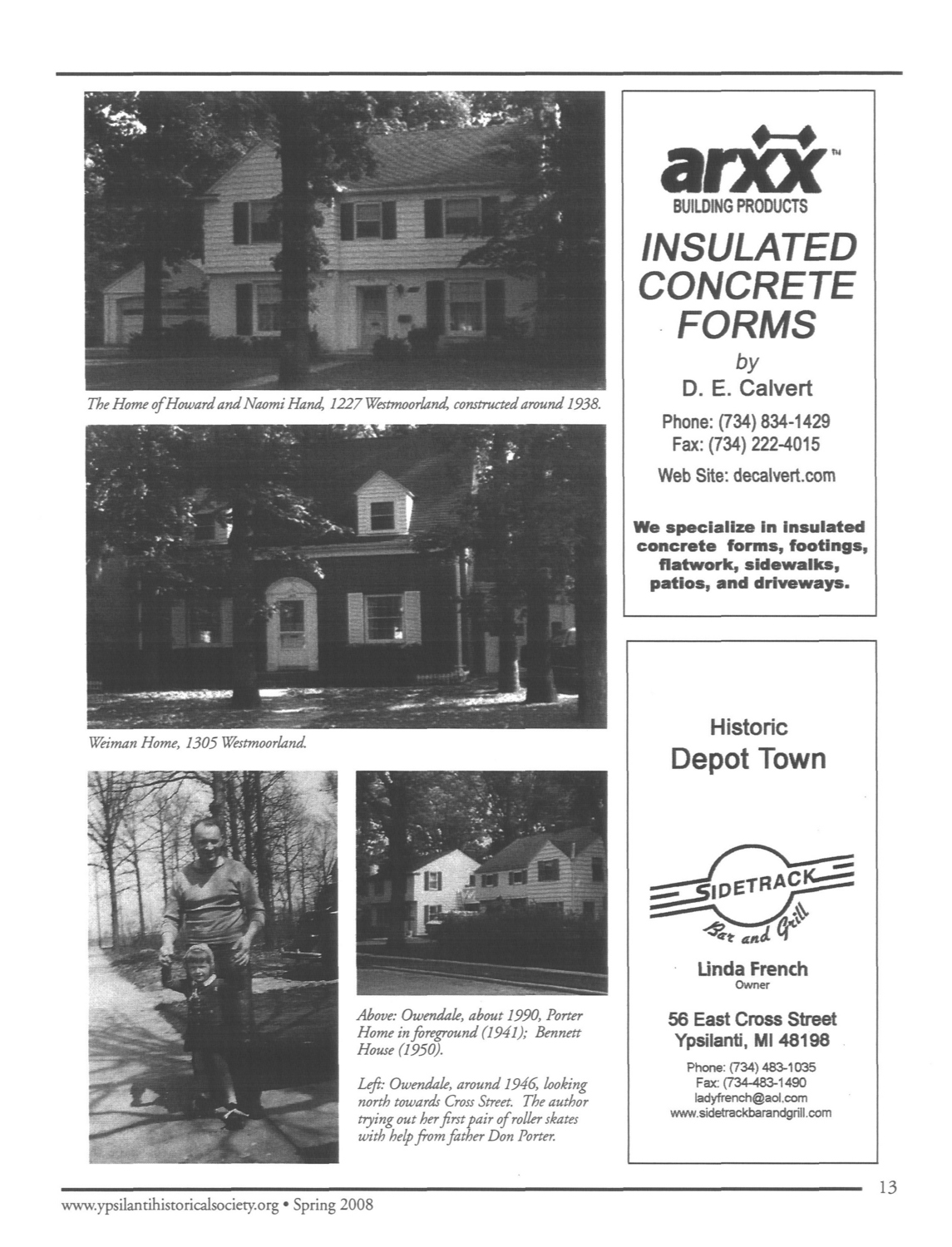 Prior to World War II, Wallace Boulevard on Ypsilanti's west side marked the boundary of residential housing. This neighborhood is known as Normal Park. The Woodbury home, 311 Wallace, is a classic example of early 20th century architecture.

Beyond Wallace lay woods and further west, open fields. Beginning in the mid-thirties, with the nation emerging from the Depression, several large homes were constructed along Westmoorland as well as Sherman. The east side of Mansfield was now the western boundary for this newer neighborhood.

My parents, Don and Ruth Porter, broke ground for their “dream house” in 1940. It was the first, and for many years the only house, facing Owendale. The lot was heavily wooded, as were the two vacant lots between our house and Westmoorland. Just around the corner of Owendale and Westmoorland stood the home of Howard and Naomi Hand. Howard was a General Motors executive, active in community affairs. Our other neighbors on the corner of Owendale and Sherman were J. Don Lawrence, the attorney, and his wife Christine. Across Owendale, on the southwest corner of Westmoorland a stately white colonial was the home of Dr. Butler, a faculty member at then Michigan State Normal College. This house was later sold to Bill and Nathalie Edmonds.

Other neighbors included the Fred Weimans, he a pharmacist whose avocation was performing as a clown; the Bancroft Briens, shoe store owners; Don and Margaret Martin, he a doctor and she a former Miss Ypsilanti. Going east up Westmoorland, was the Bisbee home, lumber company owners; two homes belonging to the Augustus brothers; and opposite, the Ben Sovey's, greenhouse owner. At the eastern end of Westmoorland and Wallace, behind the Woodbury house, a later owner installed a tennis court, something that impressed me on my childhood excursions.

It was a pretty and prosperous neighborhood. The homes were all two stories set on good-sized lots. There were traditional Colonials, Dutch Colonials, Tudors, and some Cape Cods. Several of the neighbors had beautifully landscaped yards. As a child I was entranced by the Hand's gazing ball and the little nooks and crannies of their garden. But my favorite place was the little woods next to our house. In the spring it was filled with wild flowers, violets and buttercups mostly, with an occasional “jack in the pulpit” or a treasured trillium.

As I grew older, I liked to organize “hikes” across the fields beyond Mansfield to the little creek. My mother always warned me to stay away from the woods that bordered each side of the field and not to play in the creek water. The latter I obeyed, the woods exerted a strong appeal though.

After World War II, many of the vacant lots, including my beloved little woods, became construction sites for new homes.

These new homes were generally smaller and occupied by families with young children. Both my brother and sister had many neighborhood playmates. New neighbors included the Fulfords, the Joslyns, the Congdons, the Goodings, and the Seyfrieds. Estabrook School was built after the war to meet the needs of the changing neighborhood. Its construction signaled the beginning of a school-building boom in Ypsilanti.

My parents sold the house on Owendale in 1987, the same year they celebrated their 50th wedding anniversary. Although I was grown and living in Washington, D.C., the loss of “our house” saddened me. I visited Ypsilanti regularly and almost always drove around the old neighborhood. Now I am back living in Ypsi in a neighborhood west and north of where I grew up. This area was once woods as well. I love my new home but a part of my heart will always be on Owendale and in the old neighborhood.

Acknowledgements: My thanks to Bill and Karen Nickels for information about the Woodbury house.

The Home of Howard and Naomi Hand, 1227 Westmoorland, constructed around 1938.

Left: Owendale, around 1946, looking north towards Cross Street. The author trying out her first pair of roller skates with help from father Don Porter.