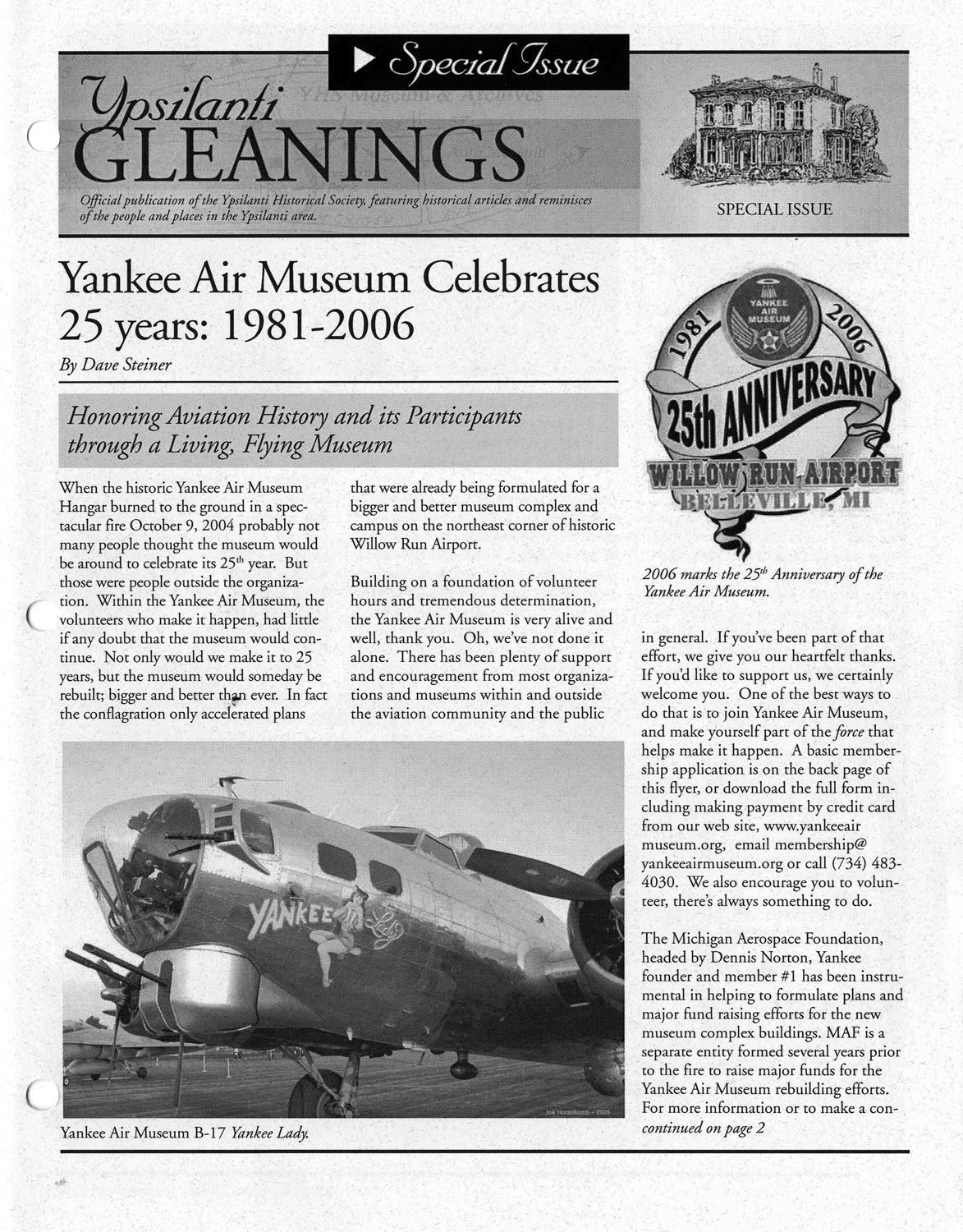 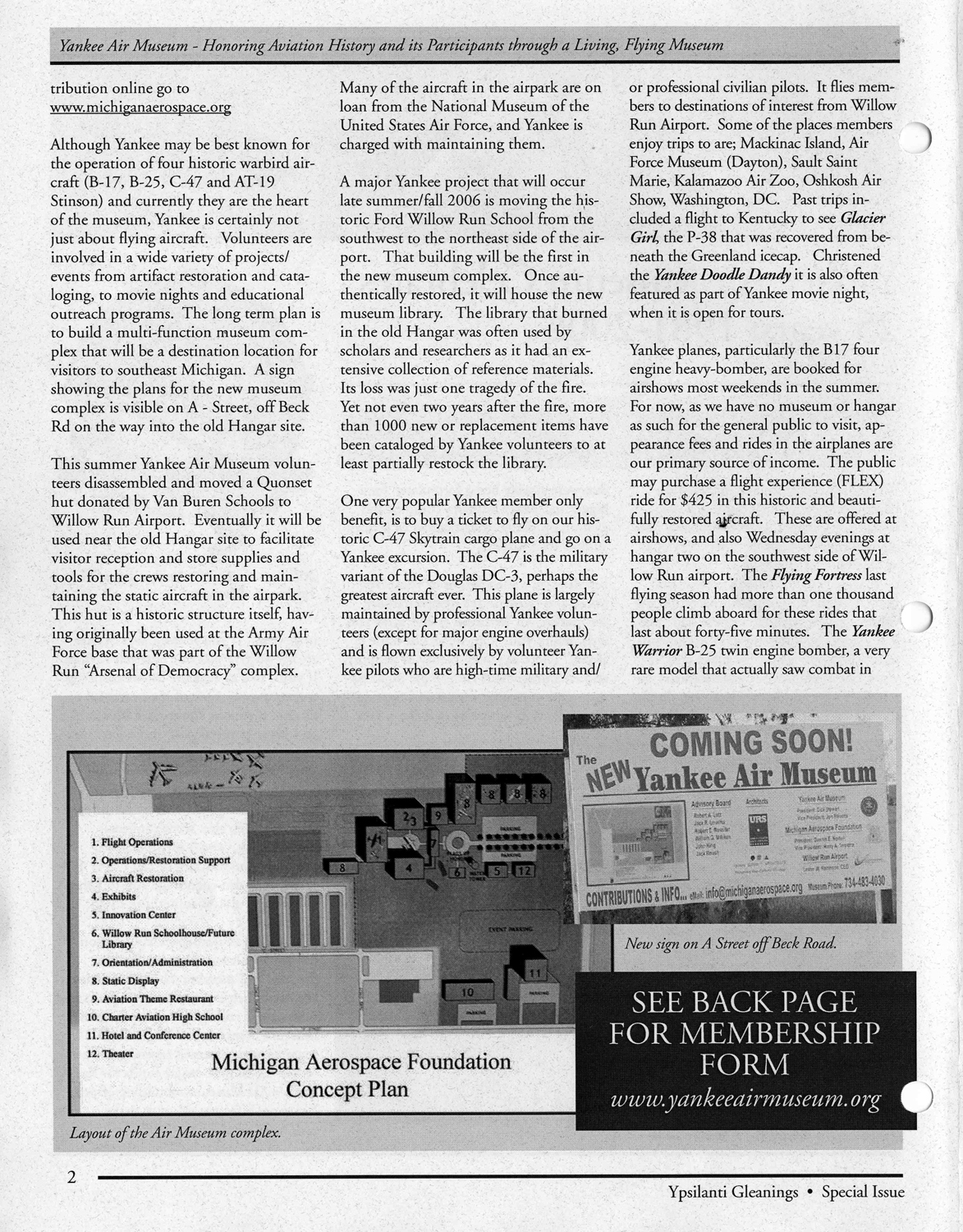 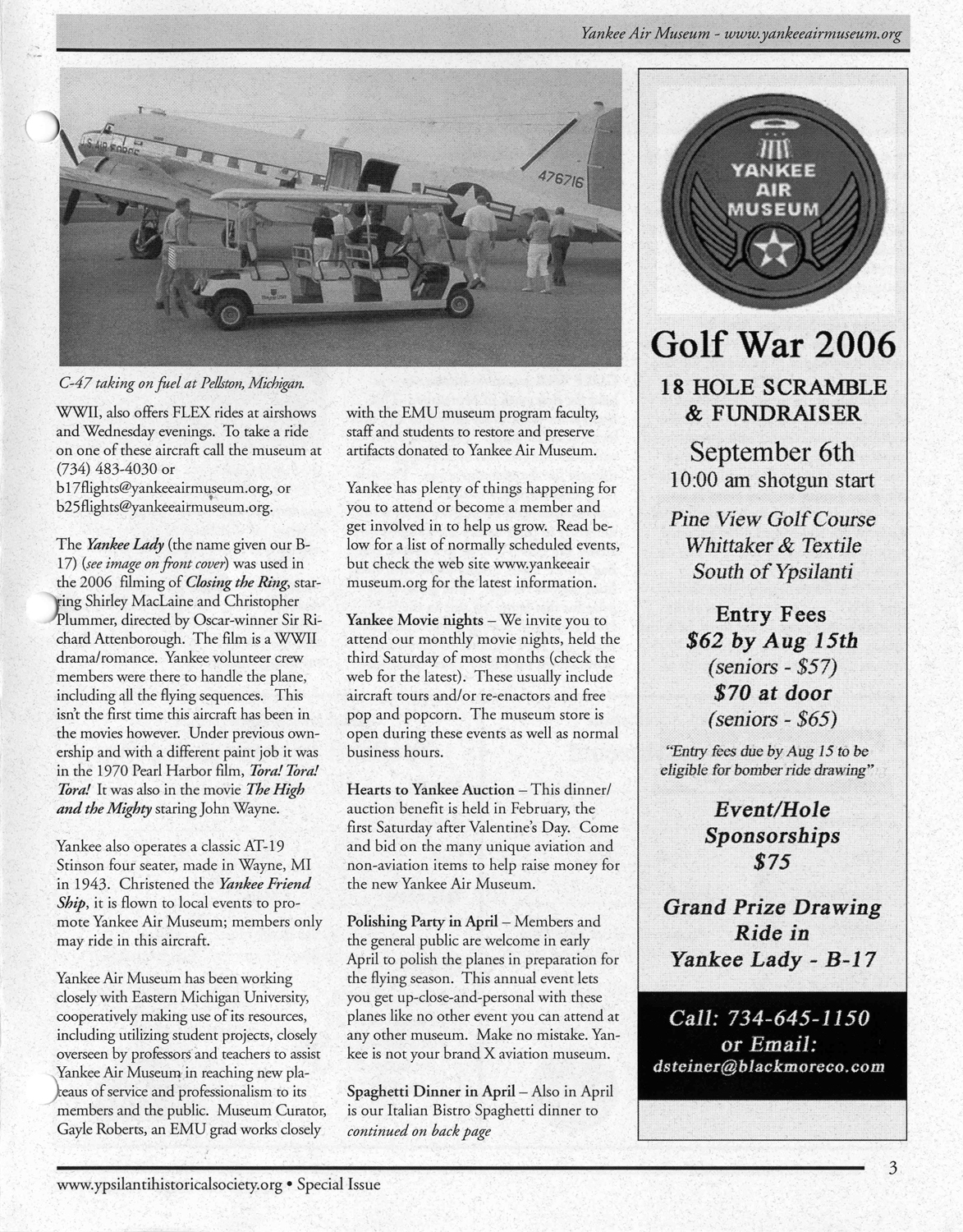 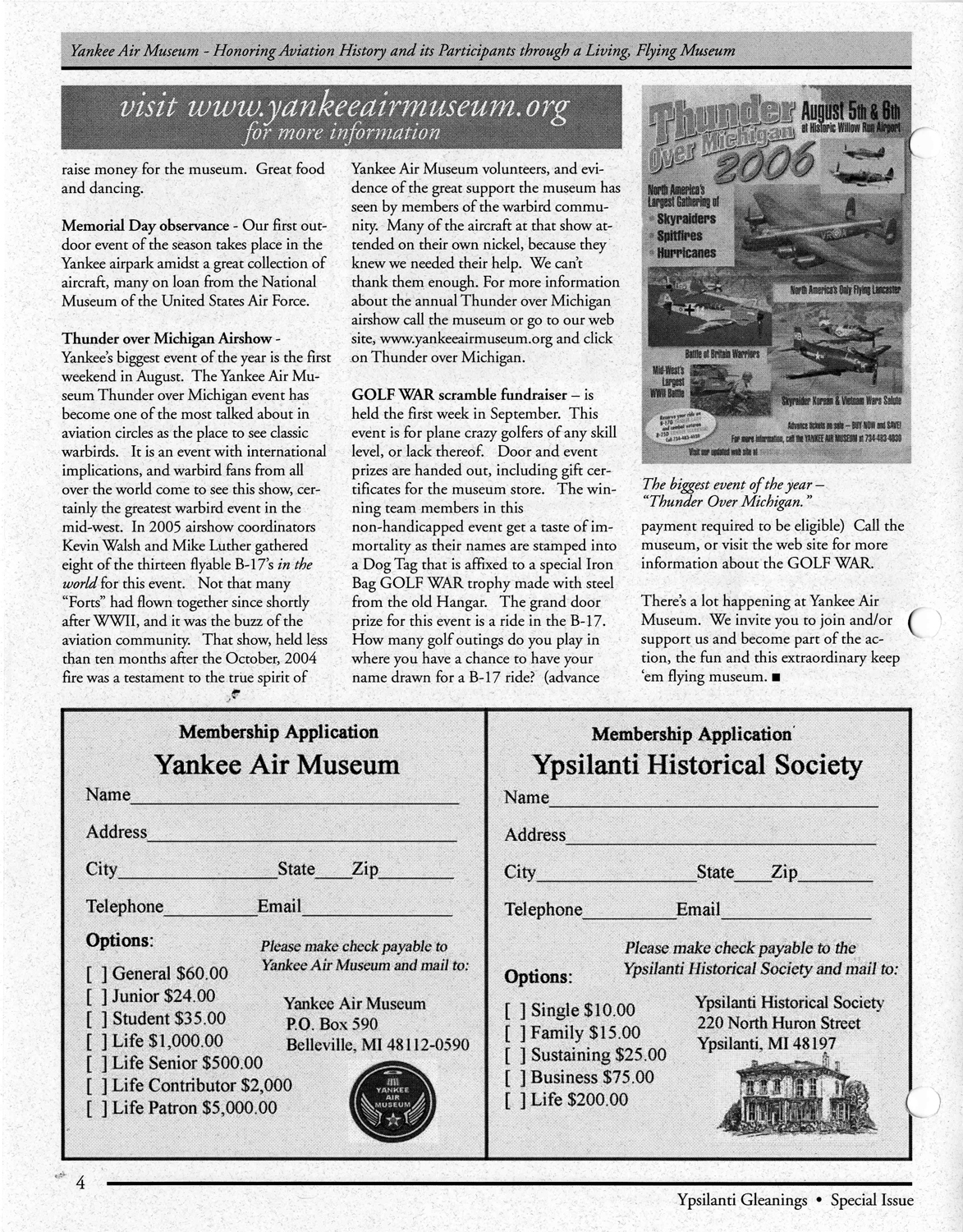 Honoring Aviation History and its Participants through a Living, Flying Museum

When the historic Yankee Air Museum Hangar burned to the ground in a spectacular fire October 9, 2004 probably not many people thought the museum would be around to celebrate its 25th year. But those were people outside the organization. Within the Yankee Air Museum, the volunteers who make it happen, had little if any doubt that the museum would continue. Not only would we make it to 25 years, but the museum would someday be rebuilt; bigger and better than ever. In fact the conflagration only accelerated plans that were already being formulated for a bigger and better museum complex and campus on the northeast corner of historic Willow Run Airport.

Building on a foundation of volunteer hours and tremendous determination, the Yankee Air Museum is very alive and well, thank you. Oh, we've not done it alone. There has been plenty of support and encouragement from most organizations and museums within and outside the aviation community and the public in general. If you've been part of that effort, we give you our heartfelt thanks. If you'd like to support us, we certainly welcome you. One of the best ways to do that is to join Yankee Air Museum, and make yourself part of the force that helps make it happen. A basic membership application is on the back page of this flyer, or download the full form including making payment by credit card from our web site, www.yankeeair museum.org, email membership@yankeeairmuseum.org or call (734) 483-4030. We also encourage you to volunteer, there's always something to do.

2006 marks the 25th Anniversary of the Yankee Air Museum.

The Michigan Aerospace Foundation, headed by Dennis Norton, Yankee founder and member #1 has been instrumental in helping to formulate plans and major fund raising efforts for the new museum complex buildings. MAF is a separate entity formed several years prior to the fire to raise major funds for the Yankee Air Museum rebuilding efforts. For more information or to make a contribution online go to www.michiganaerospace.org

Although Yankee may be best known for the operation of four historic warbird aircraft (B-17, B-25, C-47 and AT-19 Stinson) and currently they are the heart of the museum, Yankee is certainly not just about flying aircraft. Volunteers are involved in a wide variety of projects/events from artifact restoration and cataloging, to movie nights and educational outreach programs. The long term plan is to build a multi-function museum complex that will be a destination location for visitors to southeast Michigan. A sign showing the plans for the new museum complex is visible on A-Street, off Beck Rd on the way into the old Hangar site.

This summer Yankee Air Museum volunteers disassembled and moved a Quonset hut donated by Van Buren Schools to Willow Run Airport. Eventually it will be used near the old Hangar site to facilitate visitor reception and store supplies and tools for the crews restoring and maintaining the static aircraft in the airpark. This hut is a historic structure itself, having originally been used at the Army Air Force base that was part of the Willow Run “Arsenal of Democracy” complex.

Many of the aircraft in the airpark are on loan from the National Museum of the United States Air Force, and Yankee is charged with maintaining them.

A major Yankee project that will occur late summer/fall 2006 is moving the historic Ford Willow Run School from the southwest to the northeast side of the airport. That building will be the first in the new museum complex. Once authentically restored, it will house the new museum library. The library that burned in the old Hangar was often used by scholars and researchers as it had an extensive collection of reference materials. Its loss was just one tragedy of the fire. Yet not even two years after the fire, more than 1000 new or replacement items have been cataloged by Yankee volunteers to at least partially restock the library.

One very popular Yankee member only benefit, is to buy a ticket to fly on our historic C-47 Skytrain cargo plane and go on a Yankee excursion. The C-47 is the military variant of the Douglas DC-3, perhaps the greatest aircraft ever. This plane is largely maintained by professional Yankee volunteers (except for major engine overhauls) and is flown exclusively by volunteer Yankee pilots who are high-time military and/or professional civilian pilots. It flies members to destinations of interest from Willow Run Airport. Some of the places members enjoy trips to are; Mackinac Island, Air Force Museum (Dayton), Sault Saint Marie, Kalamazoo Air Zoo, Oshkosh Air Show, Washington, DC. Past trips included a flight to Kentucky to see Glacier Girl, the P-38 that was recovered from beneath the Greenland icecap. Christened the Yankee Doodle Dandy it is also often featured as part of Yankee movie night, when it is open for tours.

Layout of the Air Museum complex.

Yankee planes, particularly the B17 four engine heavy-bomber, are booked for airshows most weekends in the summer. For now, as we have no museum or hangar as such for the general public to visit, appearance fees and rides in the airplanes are our primary source of income. The public may purchase a flight experience (FLEX) ride for &dollar;425 in this historic and beautifully restored aircraft. These are offered at airshows, and also Wednesday evenings at hangar two on the southwest side of Willow Run airport. The Flying Fortress last flying season had more than one thousand people climb aboard for these rides that last about forty-five minutes. The Yankee Warrior B-25 twin engine bomber, a very rare model that actually saw combat in WWII, also offers FLEX rides at airshows and Wednesday evenings. To take a ride on one of these aircraft call the museum at (734) 483-4030 or b17flights@yankeeairmuseum.org, or b25flights@yankeeairmuseum.org.

The Yankee Lady (the name given our B-17) (see image on front cover) was used in the 2006 filming of Closing the Ring, starring Shirley MacLaine and Christopher Plummer, directed by Oscar-winner Sir Richard Attenborough. The film is a WWII drama/romance. Yankee volunteer crew members were there to handle the plane, including all the flying sequences. This isn't the first time this aircraft has been in the movies however. Under previous ownership and with a different paint job it was in the 1970 Pearl Harbor film, Tora! Tora! Tora! It was also in the movie The High and the Mighty staring John Wayne.

Yankee also operates a classic AT-19 Stinson four seater, made in Wayne, MI in 1943. Christened the Yankee Friend Ship, it is flown to local events to promote Yankee Air Museum; members only may ride in this aircraft.

Yankee Air Museum has been working closely with Eastern Michigan University, cooperatively making use of its resources, including utilizing student projects, closely overseen by professors and teachers to assist Yankee Air Museum in reaching new plateaus of service and professionalism to its members and the public. Museum Curator, Gayle Roberts, an EMU grad works closely with the EMU museum program faculty, staff and students to restore and preserve artifacts donated to Yankee Air Museum.

Yankee has plenty of things happening for you to attend or become a member and get involved in to help us grow. Read below for a list of normally scheduled events, but check the web site www.yankeeairmuseum.org for the latest information.

Yankee Movie nights — We invite you to attend our monthly movie nights, held the third Saturday of most months (check the web for the latest). These usually include aircraft tours and/or re-enactors and free pop and popcorn. The museum store is open during these events as well as normal business hours.

Hearts to Yankee Auction — This dinner/auction benefit is held in February, the first Saturday after Valentine's Day. Come and bid on the many unique aviation and non-aviation items to help raise money for the new Yankee Air Museum.

Polishing Party in April — Members and the general public are welcome in early April to polish the planes in preparation for the flying season. This annual event lets you get up-close-and-personal with these planes like no other event you can attend at any other museum. Make no mistake. Yankee is not your brand × aviation museum.

Spaghetti Dinner in April — Also in April is our Italian Bistro Spaghetti dinner to raise money for the museum. Great food and dancing.

Memorial Day observance — Our first outdoor event of the season takes place in the Yankee airpark amidst a great collection of aircraft, many on loan from the National Museum of the United States Air Force.

Thunder over Michigan Airshow — Yankee's biggest event of the year is the first weekend in August. The Yankee Air Museum Thunder over Michigan event has become one of the most talked about in aviation circles as the place to see classic warbirds. It is an event with international implications, and warbird fans from all over the world come to see this show, certainly the greatest warbird event in the mid-west. In 2005 airshow coordinators Kevin Walsh and Mike Luther gathered eight of the thirteen flyable B-17's in the world for this event. Not that many “Forts” had flown together since shortly after WWII, and it was the buzz of the aviation community. That show, held less than ten months after the October, 2004 fire was a testament to the true spirit of Yankee Air Museum volunteers, and evidence of the great support the museum has seen by members of the warbird community. Many of the aircraft at that show attended on their own nickel, because they knew we needed their help. We can't thank them enough. For more information about the annual Thunder over Michigan airshow call the museum or go to our web site, www.yankeeairmuseum.org and click on Thunder over Michigan.

GOLF WAR scramble fundraiser — is held the first week in September. This event is for plane crazy golfers of any skill level, or lack thereof. Door and event prizes are handed out, including gift certificates for the museum store. The winning team members in this non-handicapped event get a taste of immortality as their names are stamped into a Dog Tag that is affixed to a special Iron Bag GOLF WAR trophy made with steel from the old Hangar. The grand door prize for this event is a ride in the B-17. How many golf outings do you play in where you have a chance to have your name drawn for a B-17 ride? (advance payment required to be eligible) Call the museum, or visit the web site for more information about the GOLF WAR.

The biggest event of the year — “Thunder Over Michigan.”

There's a lot happening at Yankee Air Museum. We invite you to join and/or support us and become part of the action, the fun and this extraordinary keep ‘em flying museum.