Was That You, Minerva? 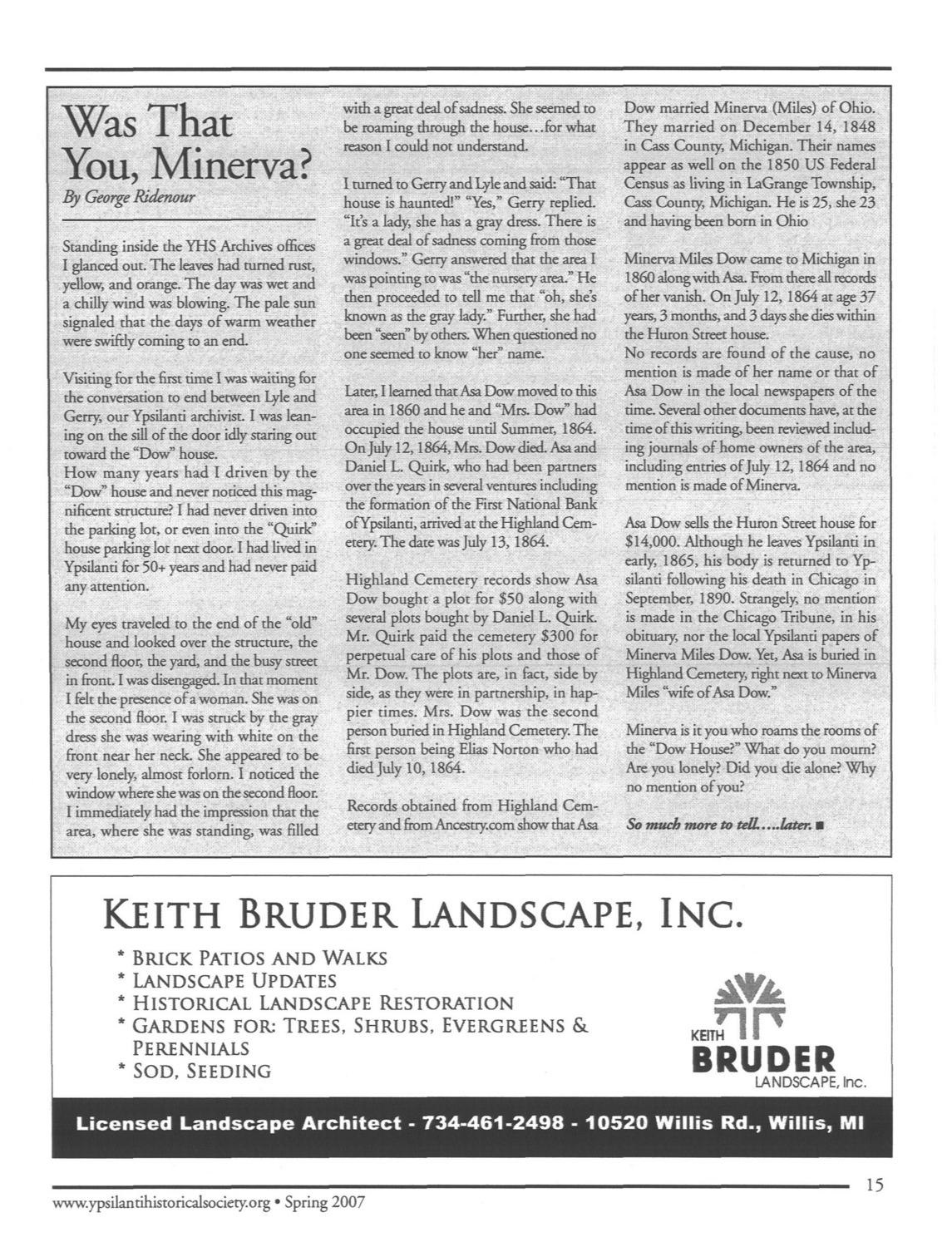 Standing inside the YHS Archives offices I glanced out. The leaves had turned rust, yellow, and orange. The day was wet and a chilly wind was blowing. The pale sun signaled that the days of warm weather were swiftly coming to an end.

Visiting for the first time I was waiting for the conversation to end between Lyle and Gerry, our Ypsilanti archivist. I was leaning on the sill of the door idly staring out toward the “Dow” house.

How many years had I driven by the “Dow” house and never noticed this magnificent structure? I had never driven into the parking lot, or even into the “Quirk” house parking lot next door. I had lived in Ypsilanti for 50&plus; years and had never paid any attention.

My eyes traveled to the end of the “old” house and looked over the structure, the second floor, the yard, and the busy street in front. I was disengaged. In that moment I felt the presence of a woman. She was on the second floor. I was struck by the gray dress she was wearing with white on the front near her neck. She appeared to be very lonely, almost forlorn. I noticed the window where she was on the second floor. I immediately had the impression that the area, where she was standing, was filled with a great deal of sadness. She seemed to be roaming through the house…for what reason I could not understand.

I turned to Gerry and Lyle and said: “That house is haunted!” “Yes,” Gerry replied. “It's a lady, she has a gray dress. There is a great deal of sadness coming from those windows.” Gerry answered that the area I was pointing to was “the nursery area.” He then proceeded to tell me that “oh, she's known as the gray lady.” Further, she had been “seen” by others. When questioned no one seemed to know “her” name.

Later, I learned that Asa Dow moved to this area in 1860 and he and “Mrs. Dow” had occupied the house until Summer, 1864. On July 12, 1864, Mrs. Dow died. Asa and Daniel L. Quirk, who had been partners over the years in several ventures including the formation of the First National Bank of Ypsilanti, arrived at the Highland Cemetery. The date was July 13, 1864.

Highland Cemetery records show Asa Dow bought a plot for &dollar;50 along with several plots bought by Daniel L. Quirk. Mr. Quirk paid the cemetery &dollar;300 for perpetual care of his plots and those of Mr. Dow. The plots are, in fact, side by side, as they were in partnership, in happier times. Mrs. Dow was the second person buried in Highland Cemetery. The first person being Elias Norton who had died July 10, 1864.

Records obtained from Highland Cemetery and from Ancestry.com show that Asa Dow married Minerva (Miles) of Ohio. They married on December 14, 1848 in Cass County, Michigan. Their names appear as well on the 1850 US Federal Census as living in LaGrange Township, Cass County, Michigan. He is 25, she 23 and having been born in Ohio

Minerva Miles Dow came to Michigan in 1860 along with Asa. From there all records of her vanish. On July 12, 1864 at age 37 years, 3 months, and 3 days she dies within the Huron Street house.

Asa Dow sells the Huron Street house for &dollar;14,000. Although he leaves Ypsilanti in early, 1865, his body is returned to Ypsilanti following his death in Chicago in September, 1890. Strangely, no mention is made in the Chicago Tribune, in his obituary, nor the local Ypsilanti papers of Minerva Miles Dow. Yet, Asa is buried in Highland Cemetery, right next to Minerva Miles “wife of Asa Dow.”

Minerva is it you who roams the rooms of the “Dow House?” What do you mourn? Are you lonely? Did you die alone? Why no mention of you?