Richard Streicher Murder: A Mystery in Our Own Backyard 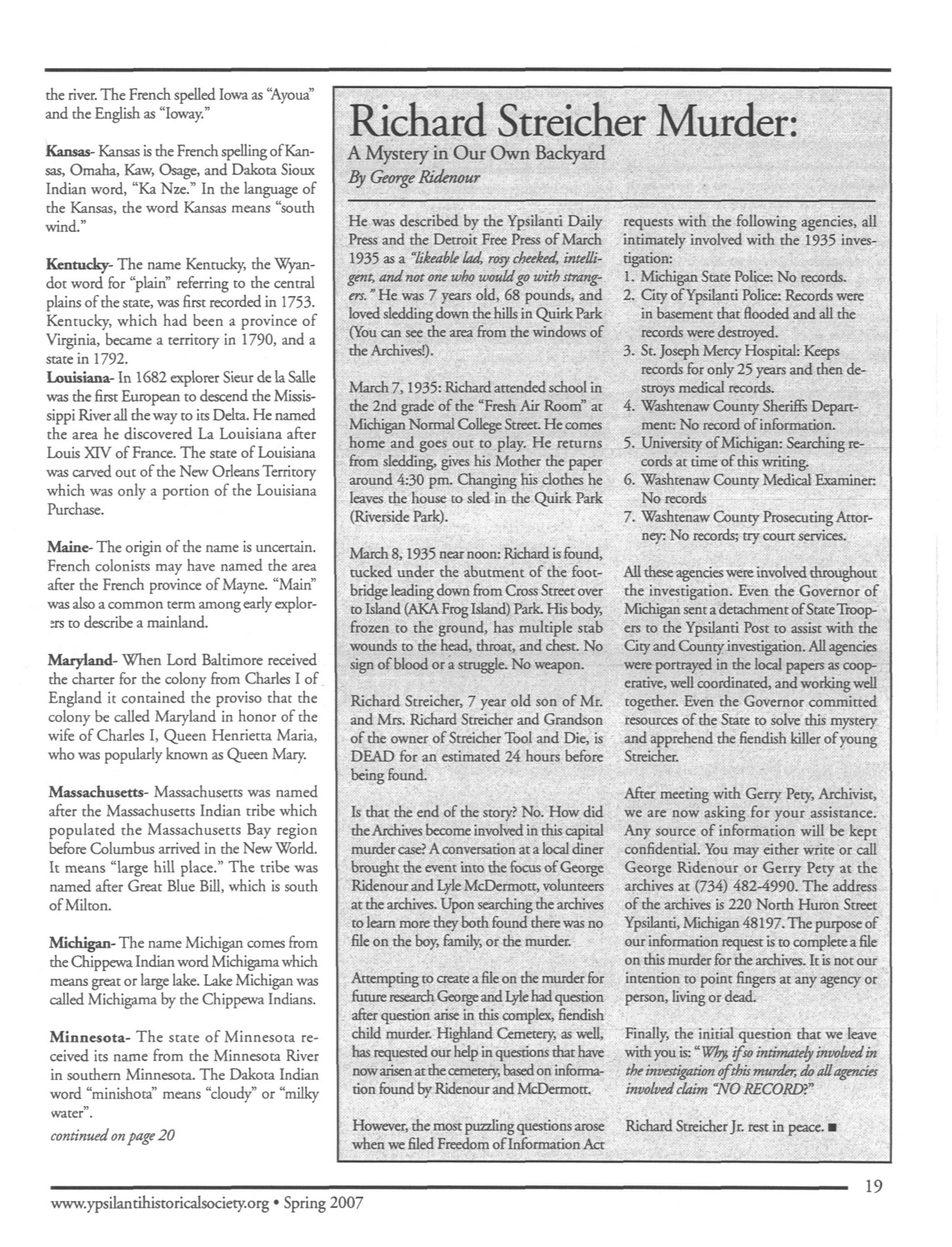 He was described by the Ypsilanti Daily Press and the Detroit Free Press of March 1935 as a “likeable lad, rosy cheeked, intelligent, and not one who would go with strangers.” He was 7 years old, 68 pounds, and loved sledding down the hills in Quirk Park (You can see the area from the windows of the Archives!).

March 7, 1935: Richard attended school in the 2nd grade of the “Fresh Air Room,” at Michigan Normal College Street. He comes home and goes out to play. He returns from sledding, gives his Mother the paper around 4:30 pm. Changing his clothes he leaves the house to sled in the Quirk Park (Riverside Park).

March 8, 1935 near noon: Richard is found, tucked under the abutment of the foot-bridge leading down from Cross Street over to Island (AKA Frog Island) Park. His body, frozen to the ground, has multiple stab wounds to the head, throat, and chest. No sign of blood or a struggle. No weapon.

Is that the end of the story? No. How did the Archives become involved in this capital murder case? A conversation at a local diner brought the event into the focus of George Ridenour and Lyle McDermott, volunteers at the archives. Upon searching the archives to learn more they both found there was no file on the boy, family, or the murder.

Attempting to create a file on the murder for future research George and Lyle had question after question arise in this complex, fiendish child murder. Highland Cemetery, as well, has requested our help in questions that have now arisen at the cemetery, based on information found by Ridenour and McDermott.

However, the most puzzling questions arose when we filed Freedom of Information Act requests with the following agencies, all intimately involved with the 1935 investigation:

2. City of Ypsilanti Police: Records were in basement that flooded and all the records were destroyed.

5. University of Michigan: Searching records at time of this writing.

All these agencies were involved throughout the investigation. Even the Governor of Michigan sent a detachment of State Troopers to the Ypsilanti Post to assist with the City and County investigation. All agencies were portrayed in the local papers as cooperative, well coordinated, and working well together. Even the Governor committed resources of the State to solve this mystery and apprehend the fiendish killer of young Streicher.

After meeting with Gerry Pety, Archivist, we are now asking for your assistance. Any source of information will be kept confidential. You may either write or call George Ridenour or Gerry Pety at the archives at (734) 482–4990. The address of the archives is 220 North Huron Street Ypsilanti, Michigan 48197. The purpose of our information request is to complete a file on this murder for the archives. It is not our intention to point fingers at any agency or person, living or dead.

Finally, the initial question that we leave with you is: “Why, if so intimately involved in the investigation of this murder, do all agencies involved claim “NO RECORD?”