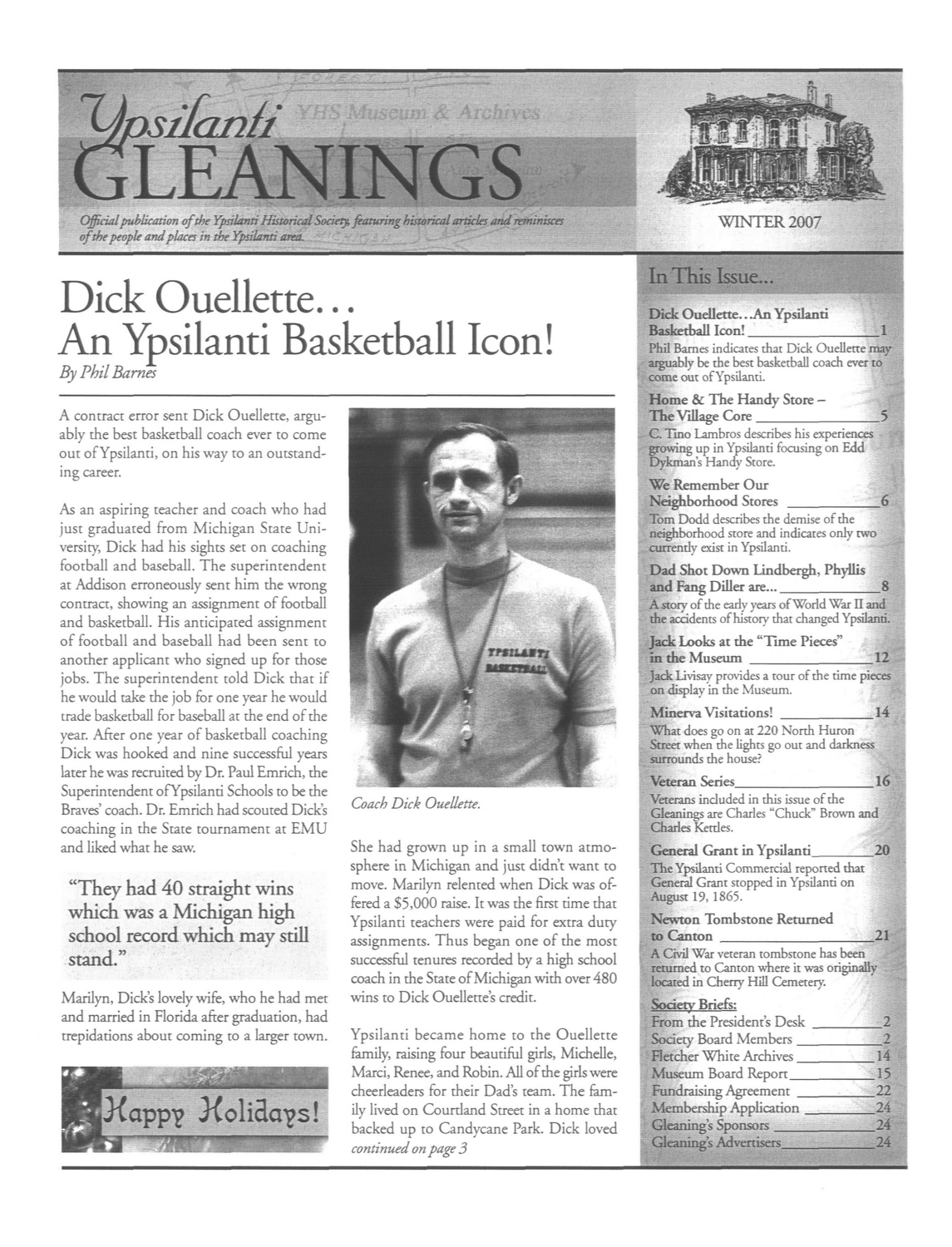 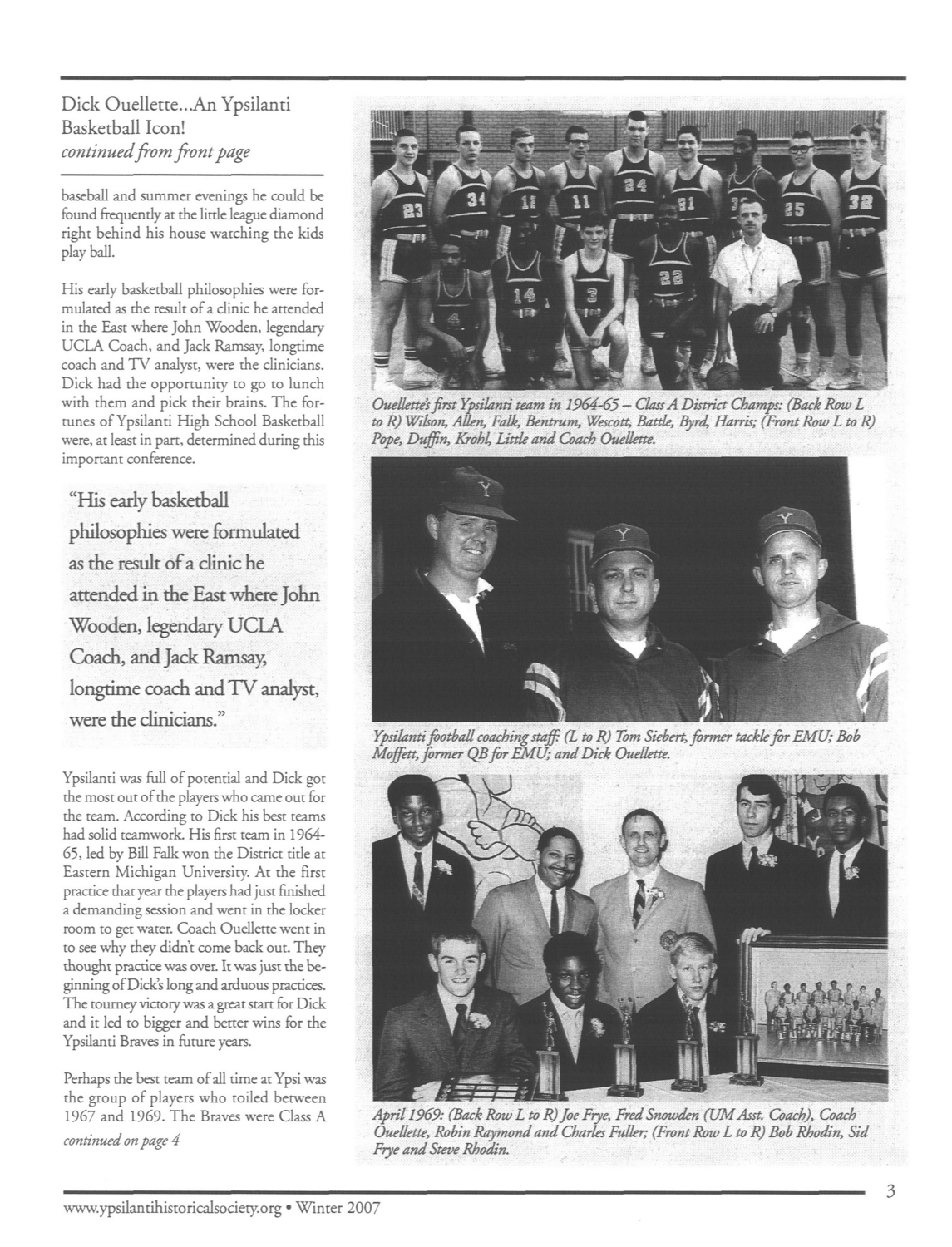 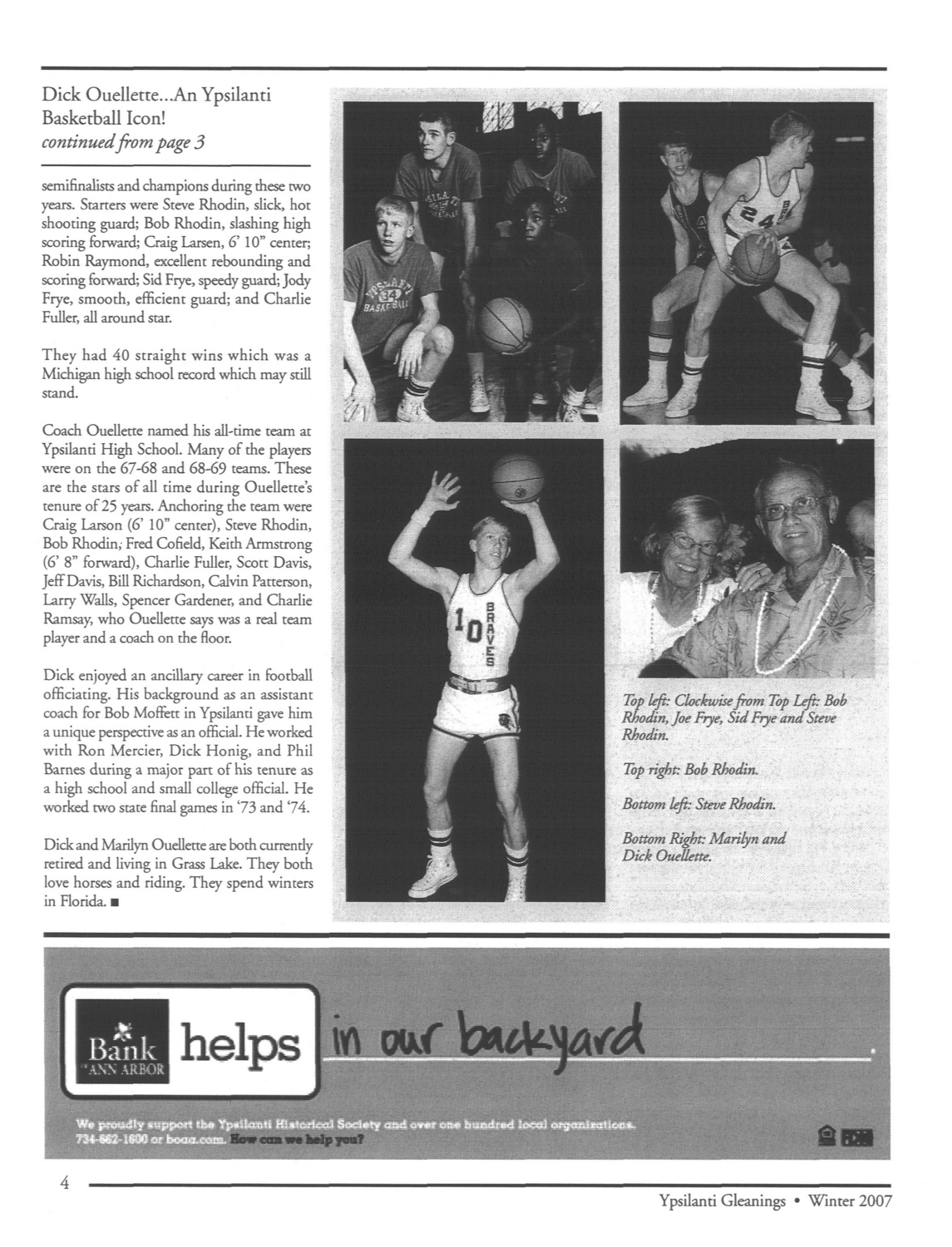 A contract error sent Dick Ouellette, arguably the best basketball coach ever to come out of Ypsilanti, on his way to an outstanding career.

As an aspiring teacher and coach who had just graduated from Michigan State University, Dick had his sights set on coaching football and baseball. The superintendent at Addison erroneously sent him the wrong contract, showing an assignment of football and basketball. His anticipated assignment of football and baseball had been sent to another applicant who signed up for those jobs. The superintendent told Dick that if he would take the job for one year he would trade basketball for baseball at the end of the year. After one year of basketball coaching Dick was hooked and nine successful years later he was recruited by Dr. Paul Emrich, the Superintendent of Ypsilanti Schools to be the Braves' coach. Dr. Emrich had scouted Dick's coaching in the State tournament at EMU and liked what he saw.

“They had 40 straight wins which was a Michigan high school record which may still stand.”

Marilyn, Dick's lovely wife, who he had met and married in Florida after graduation, had trepidations about coming to a larger town.

She had grown up in a small town atmosphere in Michigan and just didn't want to move. Marilyn relented when Dick was offered a &dollar;5,000 raise. It was the first time that Ypsilanti teachers were paid for extra duty assignments. Thus began one of the most successful tenures recorded by a high school coach in the State of Michigan with over 480 wins to Dick Ouellette's credit.

Ypsilanti became home to the Ouellette family, raising four beautiful girls, Michelle, Marci, Renee, and Robin. All of the girls were cheerleaders for their Dad's team. The family lived on Courtland Street in a home that backed up to Candycane Park. Dick loved baseball and summer evenings he could be found frequently at the little league diamond right behind his house watching the kids play ball.

His early basketball philosophies were formulated as the result of a clinic he attended in the East where John Wooden, legendary UCLA Coach, and Jack Ramsay, longtime coach and TV analyst, were the clinicians. Dick had the opportunity to go to lunch with them and pick their brains. The fortunes of Ypsilanti High School Basketball were, at least in part, determined during this important conference.

“His early basketball philosophies were formulated as the result of a clinic he attended in the East where John Wooden, legendary UCLA Coach, and Jack Ramsay, longtime coach and TV analyst, were the clinicians.”

Ypsilanti was full of potential and Dick got the most out of the players who came out for the team. According to Dick his best teams had solid teamwork. His first team in 1964-65, led by Bill Falk won the District title at Eastern Michigan University. At the first practice that year the players had just finished a demanding session and went in the locker room to get water. Coach Ouellette went in to see why they didn't come back out. They thought practice was over. It was just the beginning of Dick's long and arduous practices. The tourney victory was a great start for Dick and it led to bigger and better wins for the Ypsilanti Braves in future years.

Perhaps the best team of all time at Ypsi was the group of players who toiled between 1967 and 1969. The Braves were Class A semifinalists and champions during these two years. Starters were Steve Rhodin, slick, hot shooting guard; Bob Rhodin, slashing high scoring forward; Craig Larsen, 6 10 center; Robin Raymond, excellent rebounding and scoring forward; Sid Frye, speedy guard; Jody Frye, smooth, efficient guard; and Charlie Fuller, all around star.

They had 40 straight wins which was a Michigan high school record which may still stand.

Coach Ouellette named his all-time team at Ypsilanti High School. Many of the players were on the 67-68 and 68-69 teams. These are the stars of all time during Ouellette's tenure of 25 years. Anchoring the team were Craig Larson (6 10 center), Steve Rhodin, Bob Rhodin, Fred Cofield, Keith Armstrong (6 8 forward), Charlie Fuller, Scott Davis, Jeff Davis, Bill Richardson, Calvin Patterson, Larry Walls, Spencer Gardener, and Charlie Ramsay, who Ouellette says was a real team player and a coach on the floor.

Dick enjoyed an ancillary career in football officiating. His background as an assistant coach for Bob Moffett in Ypsilanti gave him a unique perspective as an official. He worked with Ron Mercier, Dick Honig, and Phil Barnes during a major part of his tenure as a high school and small college official. He worked two state final games in 73 and 74.

Dick and Marilyn Ouellette are both currently retired and living in Grass Lake. They both love horses and riding. They spend winters in Florida.