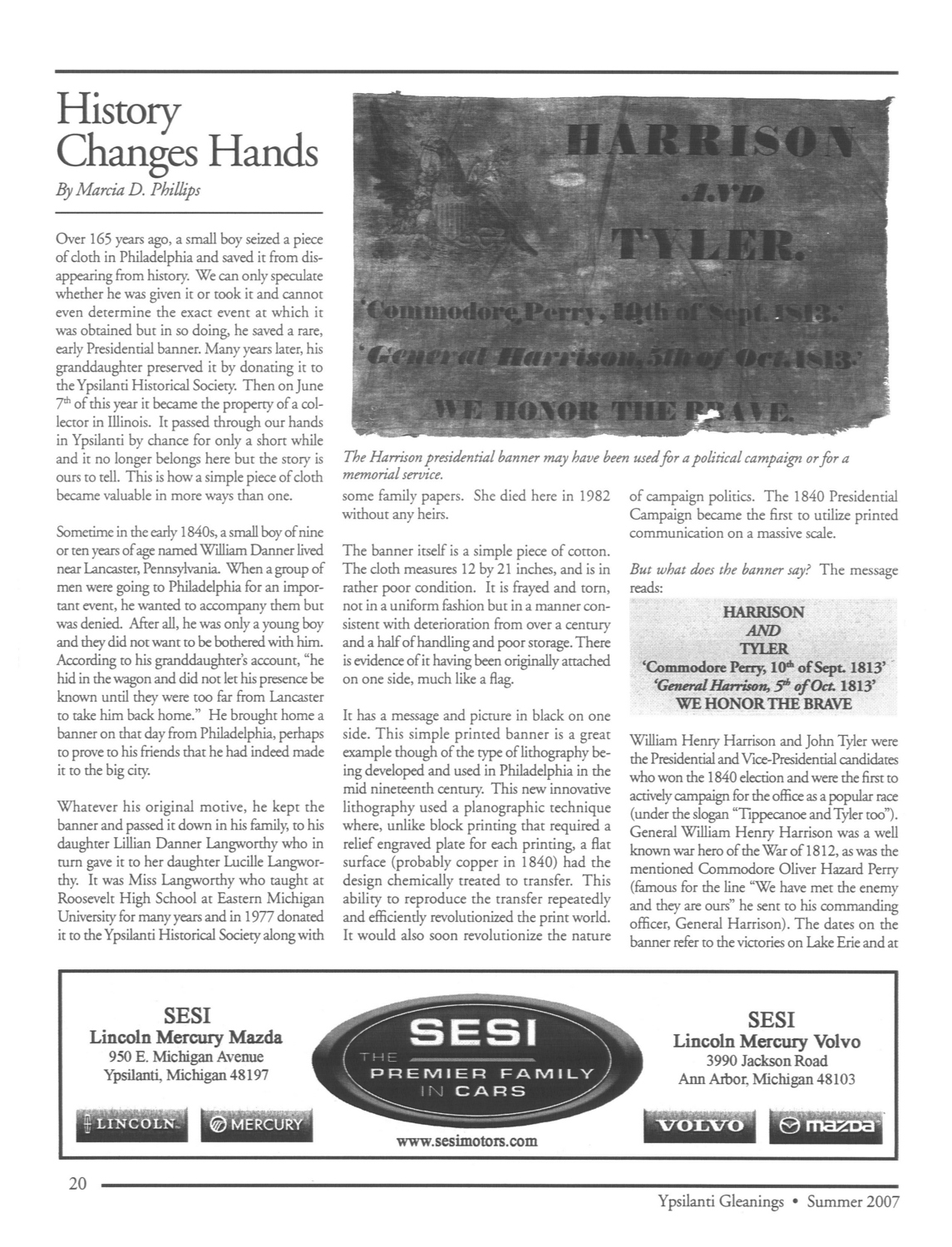 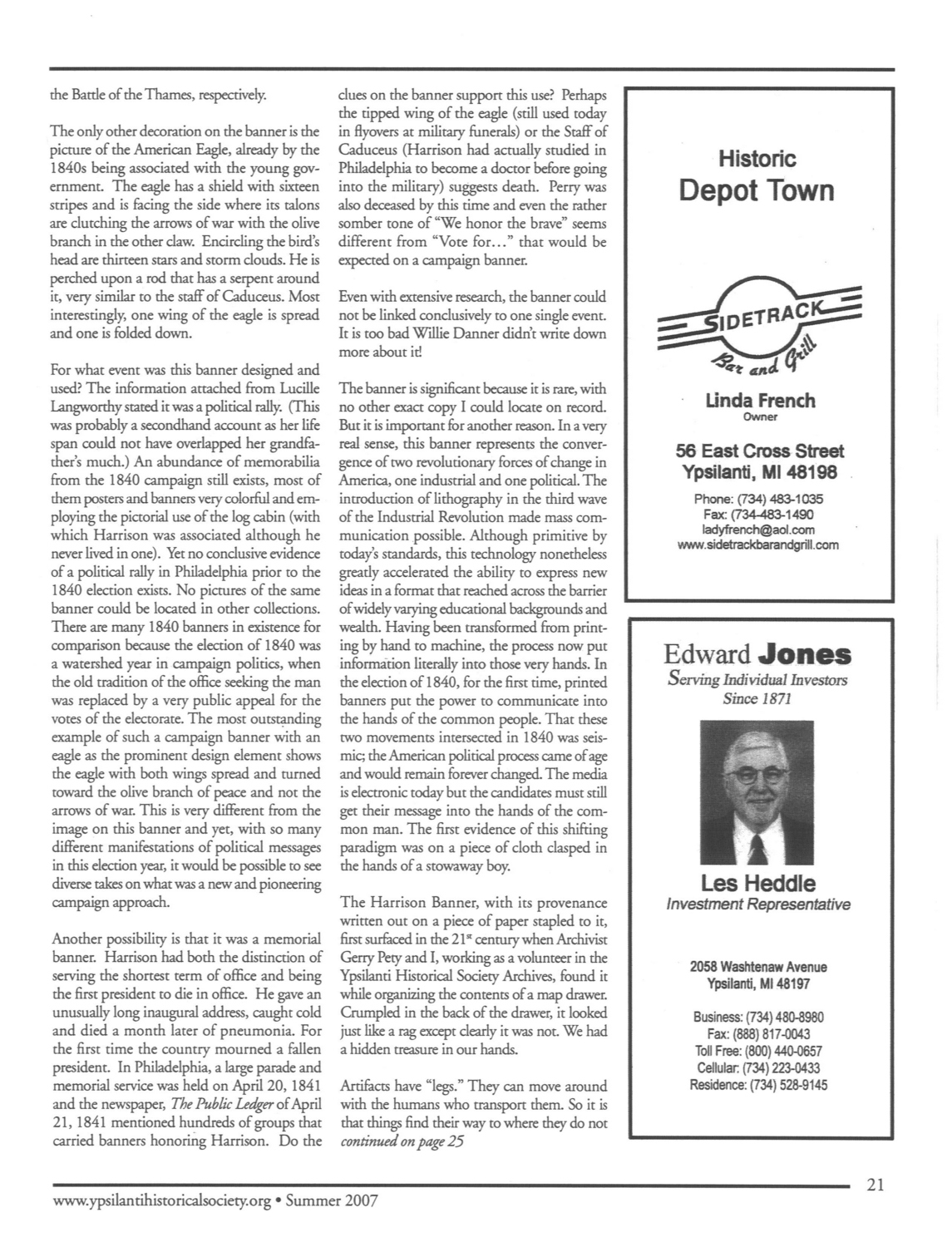 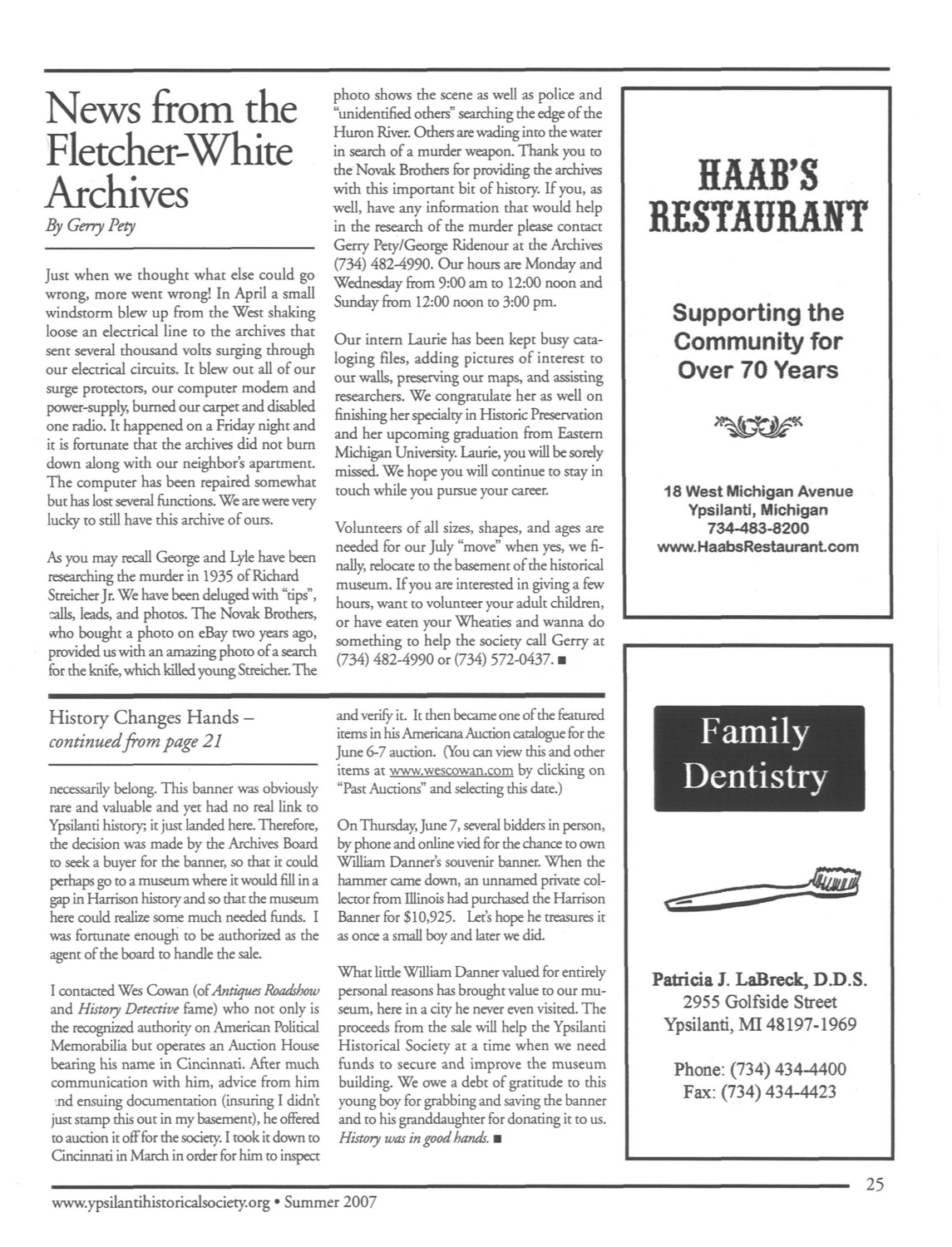 Over 165 years ago, a small boy seized a piece of cloth in Philadelphia and saved it from disappearing from history. We can only speculate whether he was given it or took it and cannot even determine the exact event at which it was obtained but in so doing, he saved a rare, early Presidential banner. Many years later, his granddaughter preserved it by donating it to the Ypsilanti Historical Society. Then on June 7th of this year it became the property of a collector in Illinois. It passed through our hands in Ypsilanti by chance for only a short while and it no longer belongs here but the story is ours to tell. This is how a simple piece of cloth became valuable in more ways than one.

Sometime in the early 1840s, a small boy of nine or ten years of age named William Danner lived near Lancaster, Pennsylvania. When a group of men were going to Philadelphia for an important event, he wanted to accompany them but was denied. After all, he was only a young boy and they did not want to be bothered with him. According to his granddaughter's account, “he hid in the wagon and did not let his presence be known until they were too far from Lancaster to take him back home.” He brought home a banner on that day from Philadelphia, perhaps to prove to his friends that he had indeed made it to the big city.

Whatever his original motive, he kept the banner and passed it down in his family, to his daughter Lillian Danner Langworthy who in turn gave it to her daughter Lucille Langworthy. It was Miss Langworthy who taught at Roosevelt High School at Eastern Michigan University for many years and in 1977 donated it to the Ypsilanti Historical Society along with some family papers. She died here in 1982 without any heirs.

The banner itself is a simple piece of cotton. The cloth measures 12 by 21 inches, and is in rather poor condition. It is frayed and torn, not in a uniform fashion but in a manner consistent with deterioration from over a century and a half of handling and poor storage. There is evidence of it having been originally attached on one side, much like a flag.

It has a message and picture in black on one side. This simple printed banner is a great example though of the type of lithography being developed and used in Philadelphia in the mid nineteenth century. This new innovative lithography used a planographic technique where, unlike block printing that required a relief engraved plate for each printing, a flat surface (probably copper in 1840) had the design chemically treated to transfer. This ability to reproduce the transfer repeatedly and efficiently revolutionized the print world. It would also soon revolutionize the nature of campaign politics. The 1840 Presidential Campaign became the first to utilize printed communication on a massive scale.

But what does the banner say? The message reads:

WE HONOR THE BRAVE

William Henry Harrison and John Tyler were the Presidential and Vice-Presidential candidates who won the 1840 election and were the first to actively campaign for the office as a popular race (under the slogan “Tippecanoe and Tyler too”). General William Henry Harrison was a well known war hero of the War of 1812, as was the mentioned Commodore Oliver Hazard Perry (famous for the line “We have met the enemy and they are ours” he sent to his commanding officer, General Harrison). The dates on the banner refer to the victories on Lake Erie and at the Battle of the Thames, respectively.

The only other decoration on the banner is the picture of the American Eagle, already by the 1840s being associated with the young government. The eagle has a shield with sixteen stripes and is facing the side where its talons are clutching the arrows of war with the olive branch in the other claw. Encircling the bird's head are thirteen stars and storm clouds. He is perched upon a rod that has a serpent around it, very similar to the staff of Caduceus. Most interestingly, one wing of the eagle is spread and one is folded down.

For what event was this banner designed and used? The information attached from Lucille Langworthy stated it was a political rally. (This was probably a secondhand account as her life span cold not have overlapped her grandfather's much.) An abundance of memorabilia from the 1840 campaign still exists, most of them posters and banners very colorful and employing the pictorial use of the log cabin (with which Harrison was associated although he never lived in one). Yet no conclusive evidence of a political rally in Philadelphia prior to the 1840 election exists. No pictures of the same banner could be located in other collections. There are many 1840 banners in existence for comparison because the election of 1840 was a watershed year in campaign politics, when the old tradition of the office seeking the man was replaced by a very public appeal for the votes of the electorate. The most outstanding example of such a campaign banner with an eagle as the prominent design element shows the eagle with both wings spread and turned toward the olive branch of peace and not the arrows of war. This is very different from the image on this banner and yet, with so many different manifestations of political messages in this election year, it would be possible to see diverse takes on what was a new and pioneering campaign approach.

Another possibility is that it was a memorial banner. Harrison had both the distinction of serving the shortest term of office and being the first president to die in office. He gave an unusually long inaugural address, caught cold and died a month later of pneumonia. For the first time the country mourned a fallen president. In Philadelphia, a large parade and memorial service was held on April 20, 1841 and the newspaper, The Public Ledger of April 21, 1841 mentioned hundreds of groups that carried banners honoring Harrison. Do the clues on the banner support this use? Perhaps the tipped wing of the eagle (still used today in flyovers at military funerals) or the Staff of Caduceus (Harrison had actually studied in Philadelphia to become a doctor before going into the military) suggests death. Perry was also deceased by this time and even the rather somber tone of “We honor the brave” seems different from “Vote for…” that would be expected on a campaign banner.

Even with extensive research, the banner could not be linked conclusively to one single event. It is too bad Willie Danner didn't write down more about it!

The banner is significant because it is rare, with no other exact copy I could locate on record. But it is important for another reason. In a very real sense, this banner represents the convergence of two revolutionary forces of change in America, one industrial and one political. The introduction of lithography in the third wave of the Industrial Revolution made mass communication possible. Although primitive by today's standards, this technology nonetheless greatly accelerated the ability to express new ideas in a format that reached across the barrier of widely varying educational backgrounds and wealth. Having been transformed from printing by hand to machine, the process now put information literally into those very hands. In the election of 1840, for the first time, printed banners put the power to communicate into the hands of the common people. That these two movements intersected in 1840 was seismic; the American political process came of age and would remain forever changed. The media is electronic today but the candidates must still get their message into the hands of the common man. The first evidence of this shifting paradigm was on a piece of cloth clasped in the hands of a stowaway boy.

The Harrison Banner, with its provenance written out on a piece of paper stapled to it, first surfaced in the 21st century when Archivist Gerry Pety and I, working as a volunteer in the Ypsilanti Historical Society Archives, found it while organizing the contents of a map drawer. Crumpled in the back of the drawer, it looked just like a rag except clearly it was not. We had a hidden treasure in our hands.

Artifacts have “legs.” They can move around with the humans who transport them. So it is that things find their way to where they do not necessarily belong. This banner was obviously rare and valuable and yet had no real link to Ypsilanti history; it just landed here. Therefore, the decision was made by the Archives Board to seek a buyer for the banner, so that it could perhaps go to a museum where it would fill in a gap in Harrison history and so that the museum here could realize some much needed funds. I was fortunate enough to be authorized as the agent of the board to handle the sale.

I contacted Wes Cowan (of Antiques Roadshow and History Detective fame) who not only is the recognized authority on American Political Memorabilia but operates an Auction House bearing his name in Cincinnati. After much communication with him, advice from him and ensuing documentation (insuring I didn't just stamp this out in my basement), he offered to auction it off for the society. I took it down to Cincinnati in March in order for him to inspect and verify it. It then became one of the featured items in his Americana Auction catalogue for the June 6–7 auction. (You can view this and other items at www.wescowan.com by clicking on “Past Auctions” and selecting this date.)

On Thursday, June 7, several bidders in person, by phone and online vied for the chance to own William Danner's souvenir banner. When the hammer came down, an unnamed private collector from Illinois had purchased the Harrison Banner for &dollar;10,925. Let's hope he treasures it as once a small boy and later we did.

What little William Danner valued for entirely personal reasons has brought value to our museum, here in a city he never even visited. The proceeds from the sale will help the Ypsilanti Historical Society at a time when we need funds to secure and improve the museum building. We owe a debt of gratitude to this young boy for grabbing and saving the banner and to his granddaughter for donating it to us. History was in good hands.