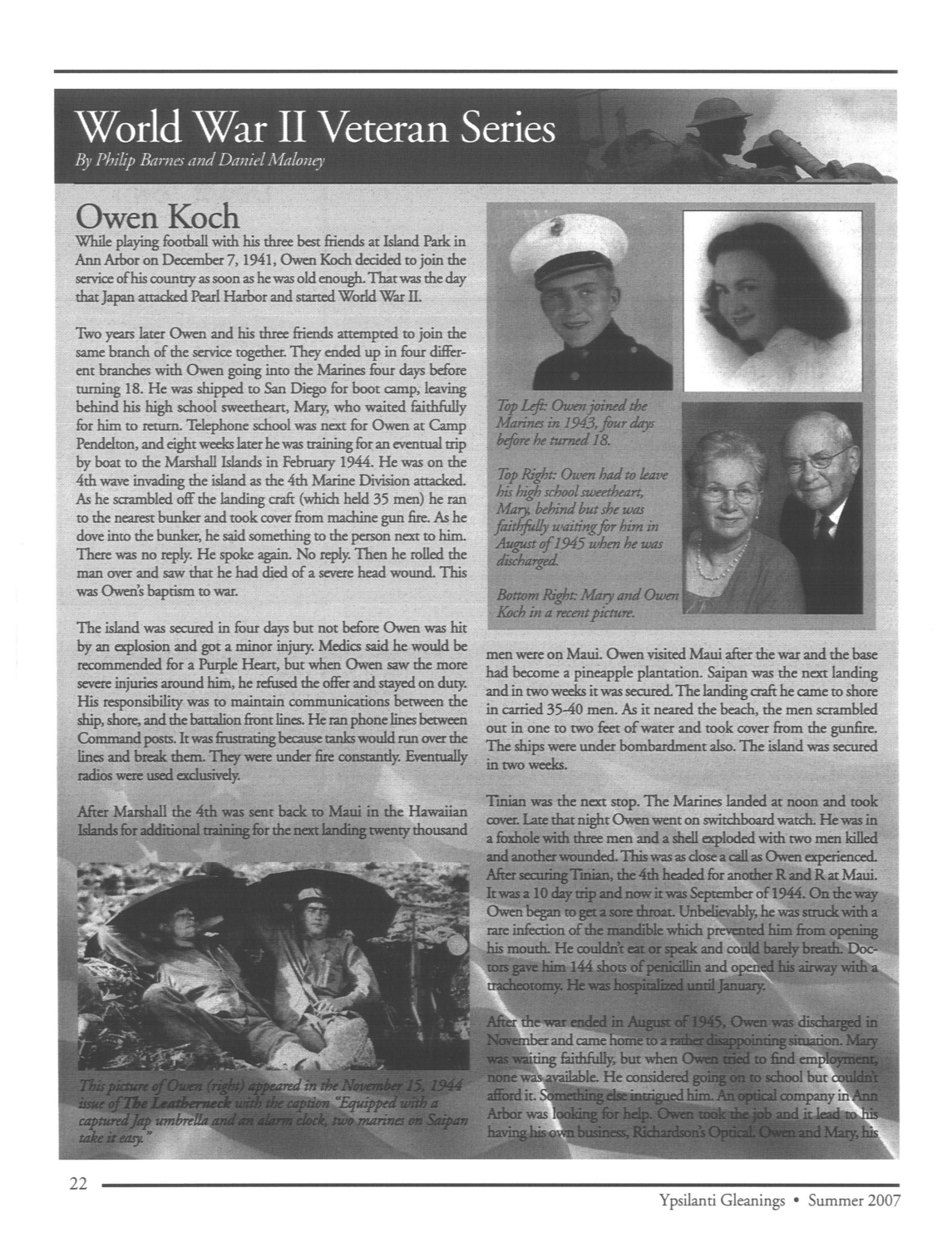 While playing football with his three best friends at Island Park in Ann Arbor on December 7, 1941, Owen Koch decided to join the service of his country as soon as he was old enough. That was the day that Japan attacked Pearl Harbor and started World War II.

Two years later Owen and his three friends attempted to join the same branch of the service together. They ended up in four different branches with Owen going into the Marines four days before turning 18. He was shipped to San Diego for boot camp, leaving behind his high school sweetheart, Mary, who waited faithfully for him to return. Telephone school was next for Owen at Camp Pendelton, and eight weeks later he was training for an eventual trip by boat to the Marshall Islands in February 1944. He was on the 4th wave invading the island as the 4th Marine Division attacked. As he scrambled off the landing craft (which held 35 men) he ran to the nearest bunker and took cover from machine gun fire. As he dove into the bunker, he said something to the person next to him. There was no reply. He spoke again. No reply. Then he rolled the man over and saw that he had died of a severe head wound. This was Owen's baptism to war.

The island was secured in four days but not before Owen was hit by an explosion and got a minor injury. Medics said he would be recommended for a Purple Heart, but when Owen saw the more severe injuries around him, he refused the offer and stayed on duty. His responsibility was to maintain communications between the ship, shore, and the battalion front lines. He ran phone lines between Command posts. It was frustrating because tanks would run over the lines and break them. They were under fire constantly. Eventually radios were used exclusively.

After Marshall the 4th was sent back to Maui in the Hawaiian Islands for additional training for the next landing twenty thousand men were on Maui. Owen visited Maui after the war and the base had become a pineapple plantation. Saipan was the next landing and in two weeks it was secured. The landing craft he came to shore in carried 35–40 men. As it neared the beach, the men scrambled out in one to two feet of water and took cover from the gunfire. The ships were under bombardment also. The island was secured in two weeks.

Tinian was the next stop. The Marines landed at noon and took cover. Late that night Owen went on switchboard watch. He was in a foxhole with three men and a shell exploded with two men killed and another wounded. This was as close a call as Owen experienced. After securing Tinian, the 4th headed for another R and R at Maui. It was a 10 day trip and now it was September of 1944. On the way Owen began to get a sore throat. Unbelievably, he was struck with a rare infection of the mandible which prevented him from opening his mouth. He couldn't eat or speak and could barely breath. Doctors gave him 144 shots of penicillin and opened his airway with a tracheotomy. He was hospitalized until January.

After the war ended in August of 1945, Owen was discharged in November and came home to a rather disappointing situation. Mary was waiting faithfully, but when Owen tried to find employment, none was available. He considered going on to school but couldn't afford it. Something else intrigued him. An optical company in Ann Arbor was looking for help. Owen took the job and it lead to his having his own business, Richardson's Optical. Owen and Mary, his childhood sweetheart, raised a family of 11 children and have been residents of Ypsilanti for many years. And, all the four Ann Arbor buddies came home from WW II safely.