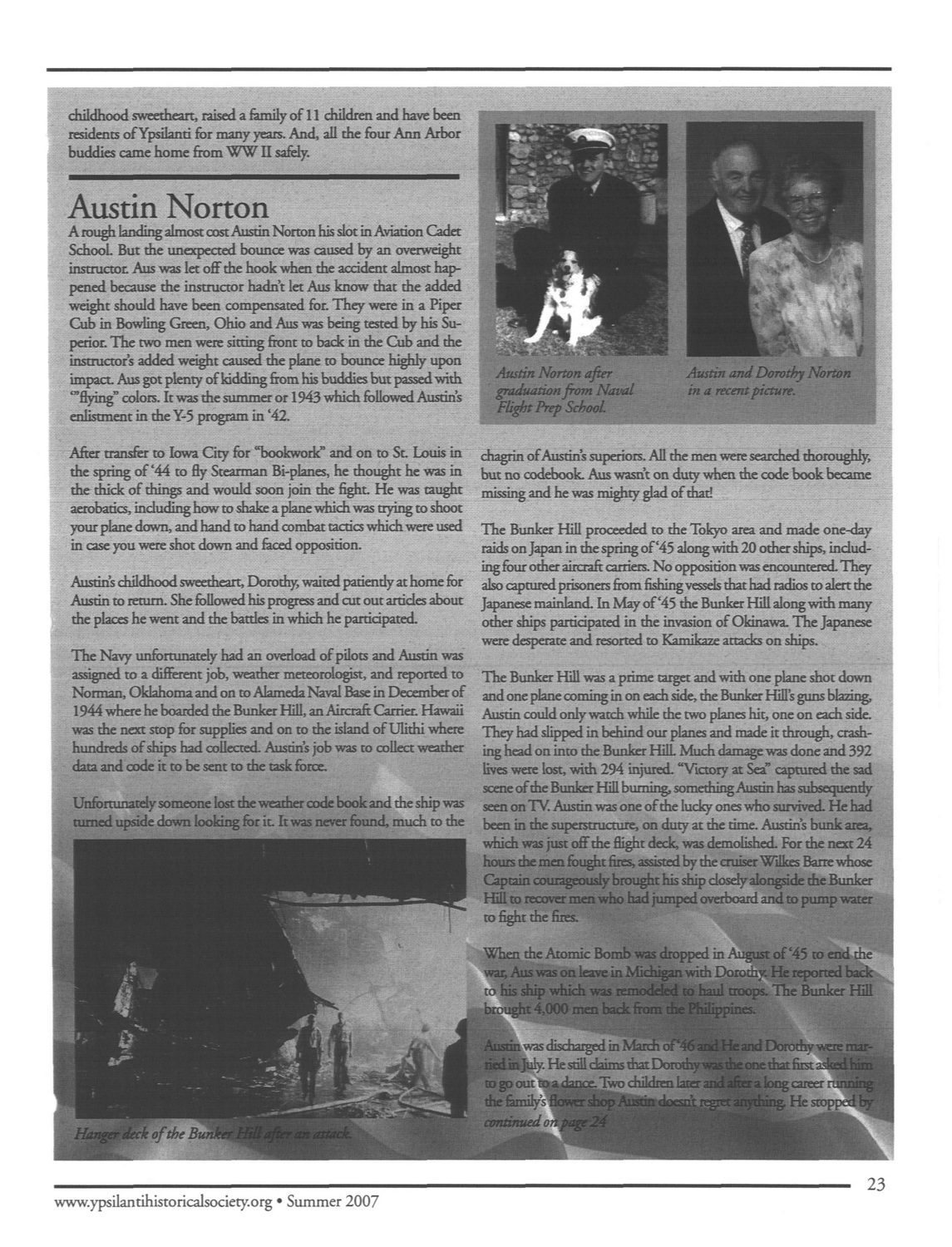 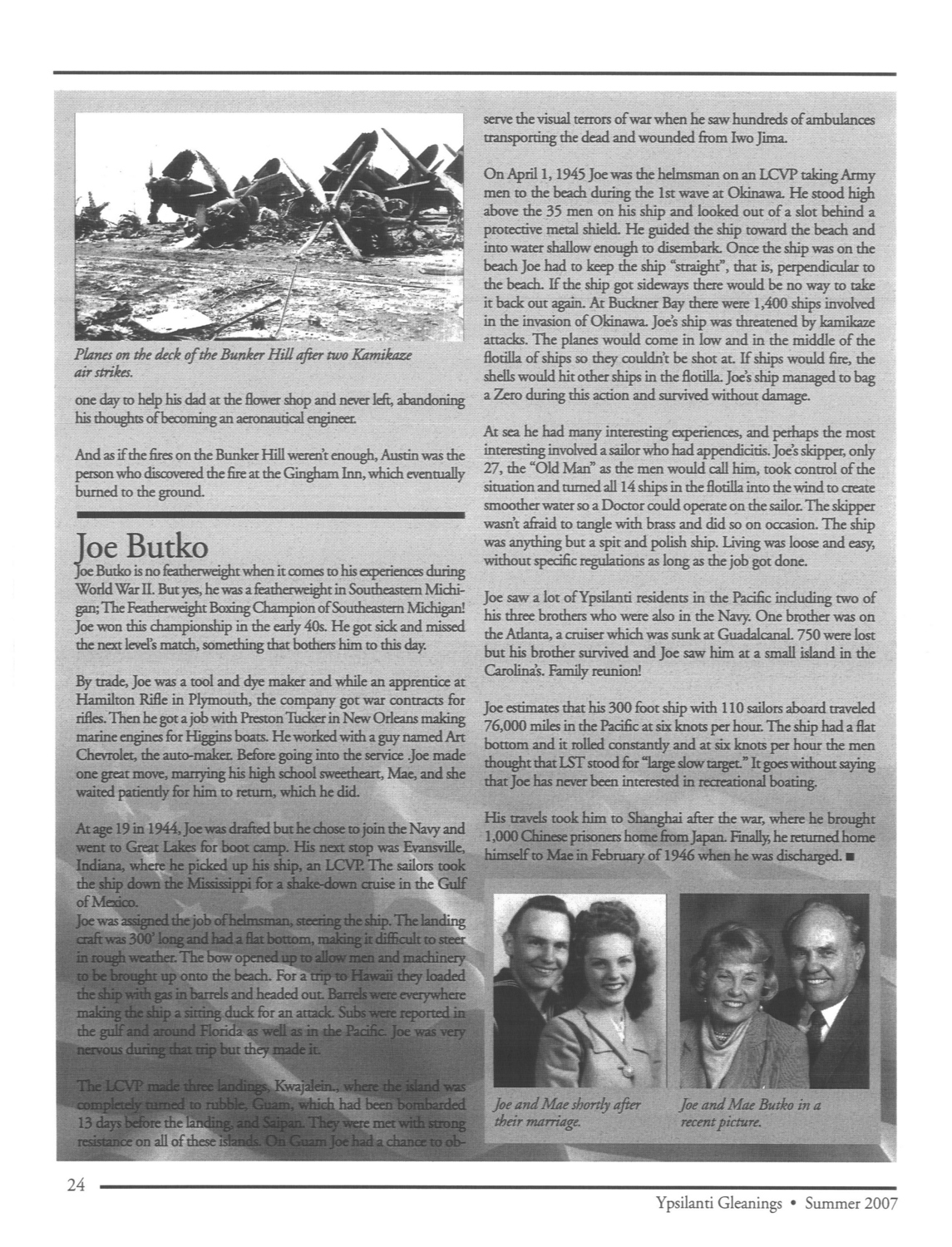 A rough landing almost cost Austin Norton his slot in Aviation Cadet School. But the unexpected bounce was caused by an overweight instructor. Aus was let off the hook when the accident almost happened because the instructor hadn't let Aus know that the added weight should have been compensated for. They were in a Piper Cub in Bowling Green, Ohio and Aus was being tested by his Superior. The two men were sitting front to back in the Cub and the instructor's added weight caused the plane to bounce highly upon impact. Aus got plenty of kidding from his buddies but passed with “flying” colors. It was the summer or 1943 which followed Austin's enlistment in the Y-5 program in 42.

After transfer to Iowa City for “bookwork” and on to St. Louis in the spring of 44 to fly Stearman Bi-planes, he thought he was in the thick of things and would soon join the fight. He was taught aerobatics, including how to shake a plane which was trying to shoot your plane down, and hand to hand combat tactics which were used in case you were shot down and faced opposition.

Austin's childhood sweetheart, Dorothy, waited patiently at home for Austin to return. She followed his progress and cut out articles about the places he went and the battles in which he participated.

The Navy unfortunately had an overload of pilots and Austin was assigned to a different job, weather meteorologist, and reported to Norman, Oklahoma and on to Alameda Naval Base in December of 1944 where he boarded the Bunker Hill, an Aircraft Carrier. Hawaii was the next stop for supplies and on to the island of Ulithi where hundreds of ships had collected. Austin's job was to collect weather data and code it to be sent to the task force.

Unfortunately someone lost the weather code book and the ship was turned upside down looking for it. It was never found, much to the chagrin of Austin's superiors. All the men were searched thoroughly, but no codebook. Aus wasn't on duty when the code book became missing and he was mighty glad of that!

The Bunker Hill proceeded to the Tokyo area and made one-day raids on Japan in the spring of 45 along with 20 other ships, including four other aircraft carriers. No opposition was encountered. They also captured prisoners from fishing vessels that had radios to alert the Japanese mainland. In May of 45 the Bunker Hill along with many other ships participated in the invasion of Okinawa. The Japanese were desperate and resorted to Kamikaze attacks on ships.

The Bunker Hill was a prime target and with one plane shot down and one plane coming in on each side, the Bunker Hill's guns blazing, Austin could only watch while the two planes hit, one on each side. They had slipped in behind our planes and made it through, crashing head on into the Bunker Hill. Much damage was done and 392 lives were lost, with 294 injured. “Victory at Sea” captured the sad scene of the Bunker Hill burning, something Austin has subsequently seen on TV. Austin was one of the lucky ones who survived. He had been in the superstructure, on duty at the time. Austin's bunk area, which was just off the flight deck, was demolished. For the next 24 hours the men fought fires, assisted by the cruiser Wilkes Barre whose Captain courageously brought his ship closely alongside the Bunker Hill to recover men who had jumped overboard and to pump water to fight the fires.

When the Atomic Bomb was dropped in August of 45 to end the war, Aus was on leave in Michigan with Dorothy. He reported back to his ship which was remodeled to haul troops. The Bunker Hill brought 4,000 men back from the Philippines.

Austin was discharged in March of 46 and He and Dorothy were married in July. He still claims that Dorothy was the one that first asked him to go out to a dance. Two children later and after a long career running the family's flower shop Austin doesn't regret anything. He stopped by one day to help his dad at the flower shop and never left, abandoning his thoughts of becoming an aeronautical engineer.

And as if the fires on the Bunker Hill weren't enough, Austin was the person who discovered the fire at the Gingham Inn, which eventually burned to the ground.