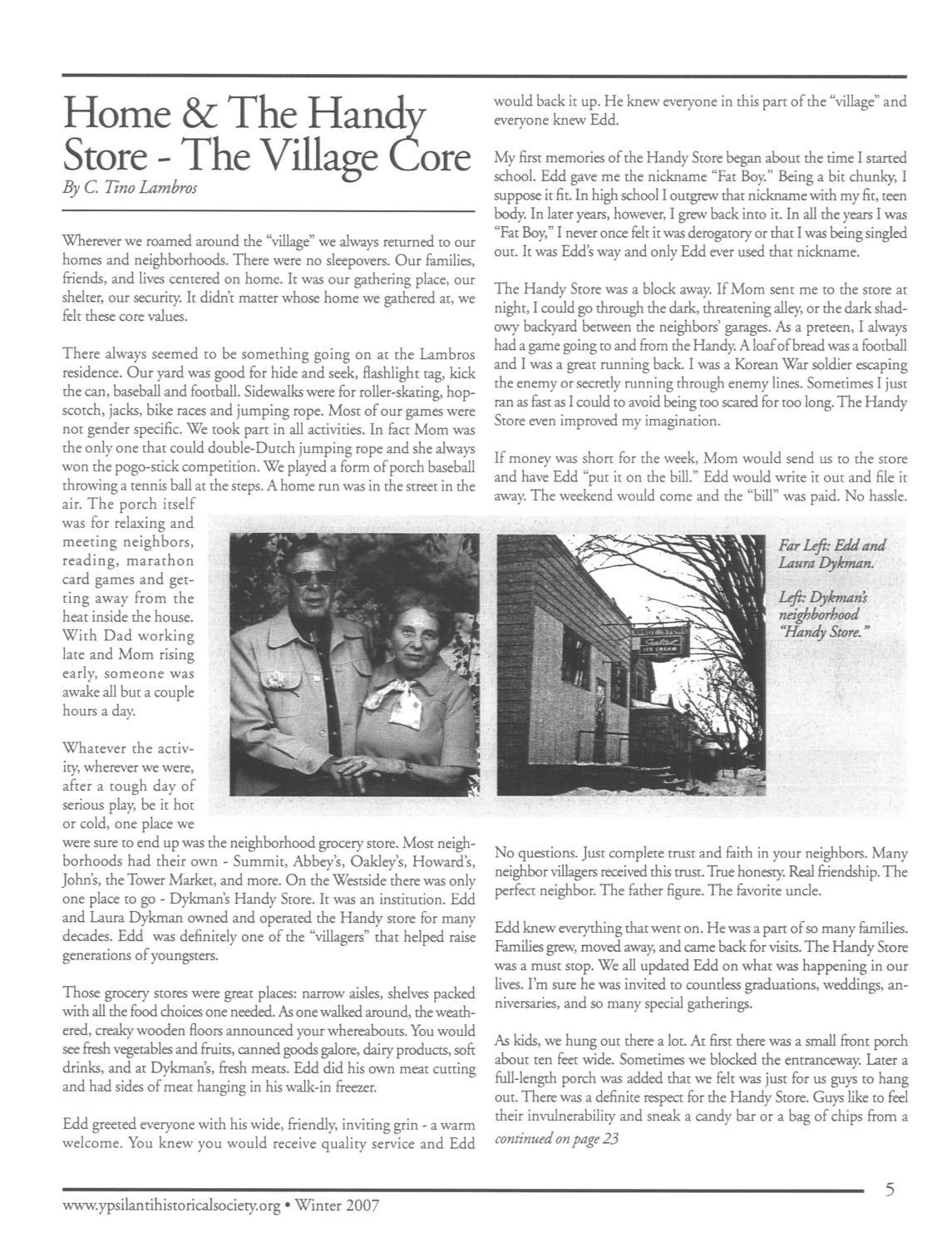 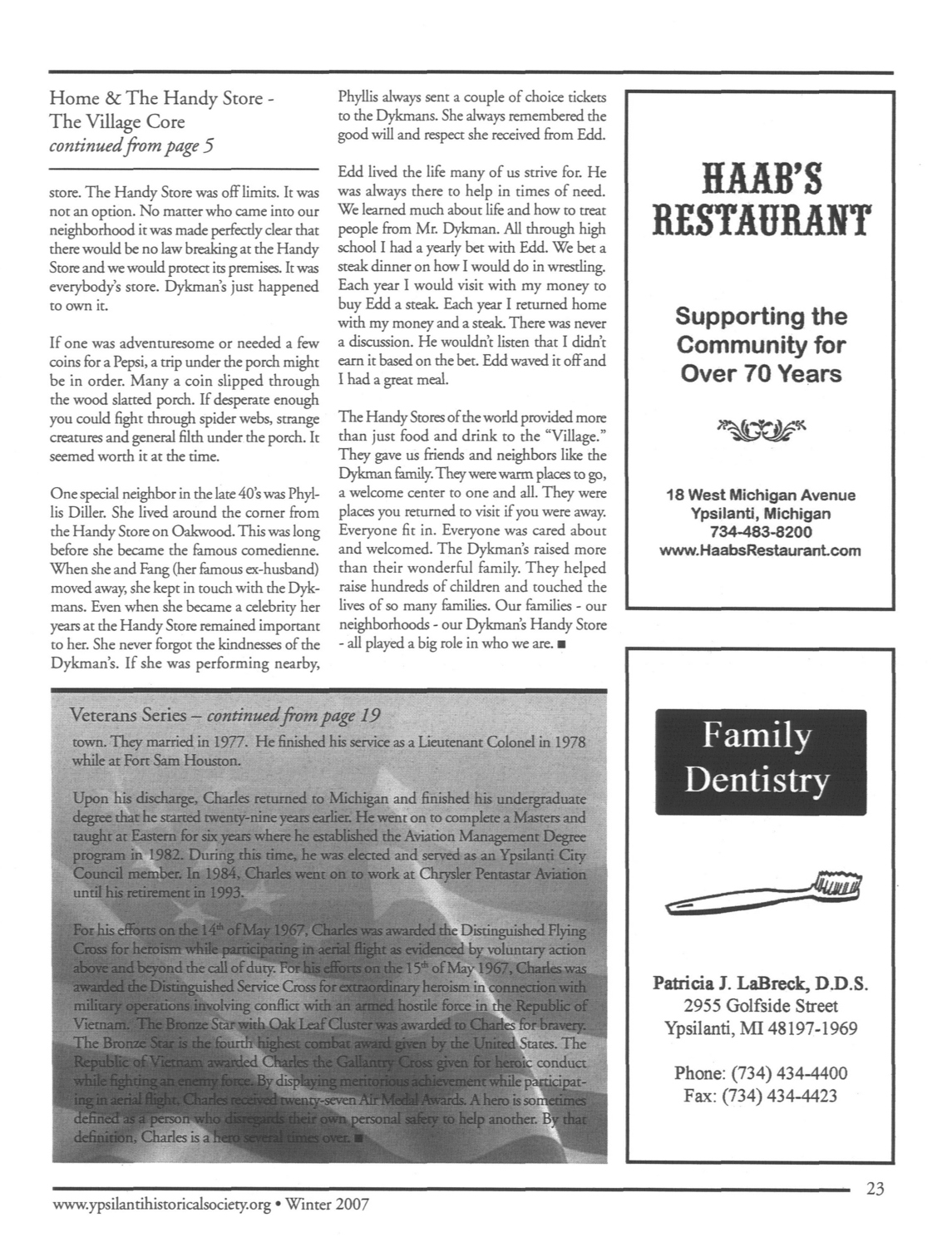 Wherever we roamed around the “village” we always returned to our homes and neighborhoods. There were no sleepovers. Our families, friends, and lives centered on home. It was our gathering place, our shelter, our security. It didn't matter whose home we gathered at, we felt these core values.

There always seemed to be something going on at the Lambros residence. Our yard was good for hide and seek, flashlight tag, kick the can, baseball and football. Sidewalks were for roller-skating, hopscotch, jacks, bike races and jumping rope. Most of our games were not gender specific. We took part in all activities. In fact Mom was the only one that could double-Dutch jumping rope and she always won the pogo-stick competition. We played a form of porch baseball throwing a tennis ball at the steps. A home run was in the street in the air. The porch itself was for relaxing and meeting neighbors, reading, marathon card games and getting away from the heat inside the house. With Dad working late and Mom rising early, someone was awake all but a couple hours a day.

Whatever the activity, wherever we were, after a tough day of serious play, be it hot or cold, one place we were sure to end up was the neighborhood grocery store. Most neighborhoods had their own-Summit, Abbey's, Oakley's, Howard's, John's, the Tower Market, and more. On the Westside there was only one place to go-Dykman's Handy Store. It was an institution. Edd and Laura Dykman owned and operated the Handy store for many decades. Edd was definitely one of the “villagers” that helped raise generations of youngsters.

Those grocery stores were great places: narrow aisles, shelves packed with all the food choices one needed. As one walked around, the weathered, creaky wooden floors announced your whereabouts. You would see fresh vegetables and fruits, canned goods galore, dairy products, soft drinks, and at Dykman's, fresh meats. Edd did his own meat cutting and had sides of meat hanging in his walk-in freezer.

Edd greeted everyone with his wide, friendly, inviting grin-a warm welcome. You knew you would receive quality service and Edd would back it up. He knew everyone in this part of the “village” and everyone knew Edd.

My first memories of the Handy Store began about the time I started school. Edd gave me the nickname “Fat Boy.” Being a bit chunky, I suppose it fit. In high school I outgrew that nickname with my fit, teen body. In later years, however, I grew back into it. In all the years I was “Fat Boy,” I never once felt it was derogatory or that I was being singled out. It was Edd's way and only Edd ever used that nickname.

The Handy Store was a block away. If Mom sent me to the store at night, I could go through the dark, threatening alley, or the dark shadowy backyard between the neighbors' garages. As a preteen, I always had a game going to and from the Handy. A loaf of bread was a football and I was a great running back. I was a Korean War soldier escaping the enemy or secretly running through enemy lines. Sometimes I just ran as fast as I could to avoid being too scared for too long. The Handy Store even improved my imagination.

If money was short for the week, Mom would send us to the store and have Edd “put it on the bill.” Edd would write it out and file it away. The weekend would come and the “bill” was paid. No hassle.

No questions. Just complete trust and faith in your neighbors. Many neighbor villagers received this trust. True honesty. Real friendship. The perfect neighbor. The father figure. The favorite uncle.

Edd knew everything that went on. He was a part of so many families. Families grew, moved away, and came back for visits. The Handy Store was a must stop. We all updated Edd on what was happening in our lives. I'm sure he was invited to countless graduations, weddings, anniversaries, and so many special gatherings.

As kids, we hung out there a lot. At first there was a small front porch about ten feet wide. Sometimes we blocked the entranceway. Later a full-length porch was added that we felt was just for us guys to hang out. There was a definite respect for the Handy Store. Guys like to feel their invulnerability and sneak a candy bar or a bag of chips from a store. The Handy Store was off limits. It was not an option. No matter who came into our neighborhood it was made perfectly clear that there would he no law breaking at the Handy Store and we would protect its premises. It was everybody's store. Dykman's just happened to own it.

If one was adventuresome or needed a few coins for a Pepsi, a trip under the porch might be in order. Many a coin slipped through the wood slatted porch. If desperate enough you could fight through spider webs, strange creatures and general filth under the porch. It seemed worth it at the time.

One special neighbor in the late 40's was Phyllis Diller. She lived around the corner from the Handy Store on Oakwood. This was long before she became the famous comedienne. When she and Fang (her famous ex-husband) moved away, she kept in touch with the Dykmans. Even when she became a celebrity her years at the Handy Store remained important to her. She never forgot the kindnesses of the Dykman's. If she was performing nearby, Phyllis always sent a couple of choice tickets to the Dykmans. She always remembered the good will and respect she received from Edd.

Edd lived the life many of us strive for. He was always there to help in times of need. We learned much about life and how to treat people from Mr. Dykman. All through high school I had a yearly bet with Edd. We bet a steak dinner on how I would do in wrestling. Each year I would visit with my money to buy Edd a steak. Each year I returned home with my money and a steak. There was never a discussion. He wouldn't listen that I didn't earn it based on the bet. Edd waved it off and I had a great meal.

The Handy Stores of the world provided more than just food and drink to the “Village.” They gave us friends and neighbors like the Dykman family. They were warm places to go, a welcome center to one and all. They were places you returned to visit if you were away. Everyone fit in. Everyone was cared about and welcomed. The Dykman's raised more than their wonderful family. They helped raise hundreds of children and touched the lives of so many families. Our families-our neighborhoods-our Dykman's Handy Store-all played a big role in who we are.