We Remember Our Neighborhood Stores 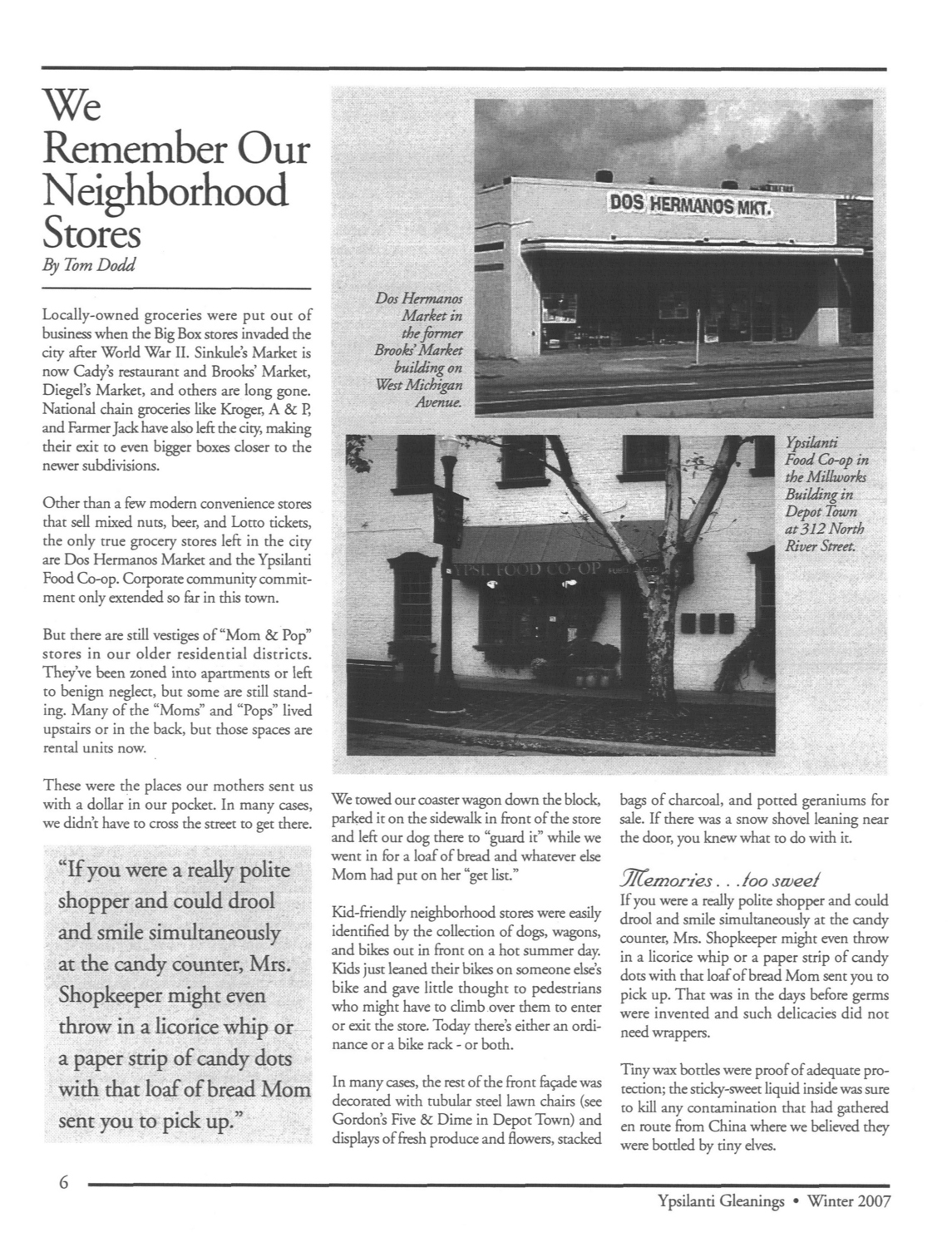 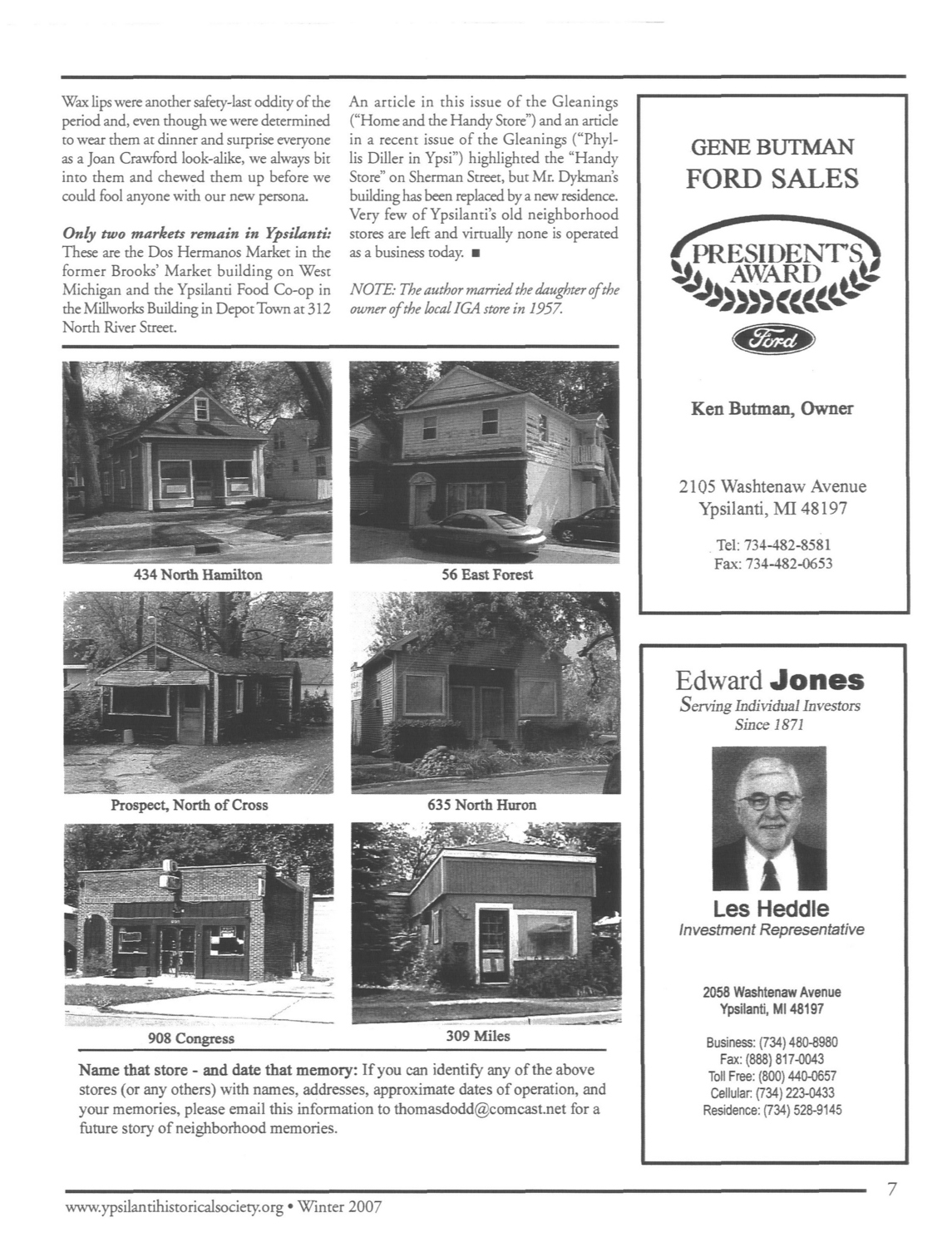 Locally-owned groceries were put out of business when the Big Box stores invaded the city after World War II. Sinkule's Market is now Cady's restaurant and Brooks' Market, Diegel's Market, and others are long gone. National chain groceries like Kroger, A & P, and Farmer Jack have also left the city, making their exit to even bigger boxes closer to the newer subdivisions.
Other than a few modern convenience stores that sell mixed nuts, beer, and Lotto tickets, the only true grocery stores left in the city are Dos Hermanos Market and the Ypsilanti Food Co-op. Corporate community commitment only extended so far in this town.
But there are still vestiges of “Mom & Pop” stores in our older residential districts. They've been zoned into apartments or left to benign neglect, but some are still standing. Many of the “Moms” and “Pops” lived upstairs or in the back, but those spaces are rental units now.
These were the places our mothers sent us with a dollar in our pocket. In many cases, we didn't have to cross the street to get there.

“If you were a really polite shopper and could drool and smile simultaneously at the candy counter, Mrs. Shopkeeper might even throw in a licorice whip or a paper strip of candy dots with that loaf of bread Mom sent you to pick up.”

We towed our coaster wagon down the block, parked it on the sidewalk in front of the store and left our dog there to “guard it” while we went in for a loaf of bread and whatever else Mom had put on her “get list.”
Kid-friendly neighborhood stores were easily identified by the collection of dogs, wagons, and bikes out in front on a hot summer day. Kids just leaned their bikes on someone else's bike and gave little thought to pedestrians who might have to climb over them to enter or exit the store. Today there's either an ordinance or a bike rack-or both.
In many cases, the rest of the front facade was decorated with tubular steel lawn chairs (see Gordon's Five & Dime in Depot Town) and displays of fresh produce and flowers, stacked bags of charcoal, and potted geraniums for sale. If there was a snow shovel leaning near the door, you knew what to do with it.

If you were a really polite shopper and could drool and smile simultaneously at the candy counter, Mrs. Shopkeeper might even throw in a licorice whip or a paper strip of candy dots with that loaf of bread Mom sent you to pick up. That was in the days before germs were invented and such delicacies did not need wrappers.
Tiny wax bottles were proof of adequate protection; the sticky-sweet liquid inside was sure to kill any contamination that had gathered en route from China where we believed they were bottled by tiny elves. Wax lips were another safety-last oddity of the period and, even though we were determined to wear them at dinner and surprise everyone as a Joan Crawford look-alike, we always bit into them and chewed them up before we could fool anyone with our new persona.

Only two markets remain in Ypsilanti:

These are the Dos Hermanos Market in the former Brooks' Market building on West Michigan and the Ypsilanti Food Co-op in the Millworks Building in Depot Town at 312 North River Street.
An article in this issue of the Gleanings (“Home and the Handy Store”) and an article in a recent issue of the Gleanings (“Phyllis Diller in Ypsi”) highlighted the “Handy Store” on Sherman Street, but Mr. Dykman's building has been replaced by a new residence. Very few of Ypsilanti's old neighborhood stores are left and virtually none is operated as a business today.

NOTE: The author married the daughter of the owner of the local IGA store in 1957.

Name that store-and date that memory: If you can identify any of the above stores (or any others) with names, addresses, approximate dates of operation, and your memories, please email this information to thomasdodd@comcast.net for a future story of neighborhood memories.