Jack Looks at the "Time Pieces" in the Museum 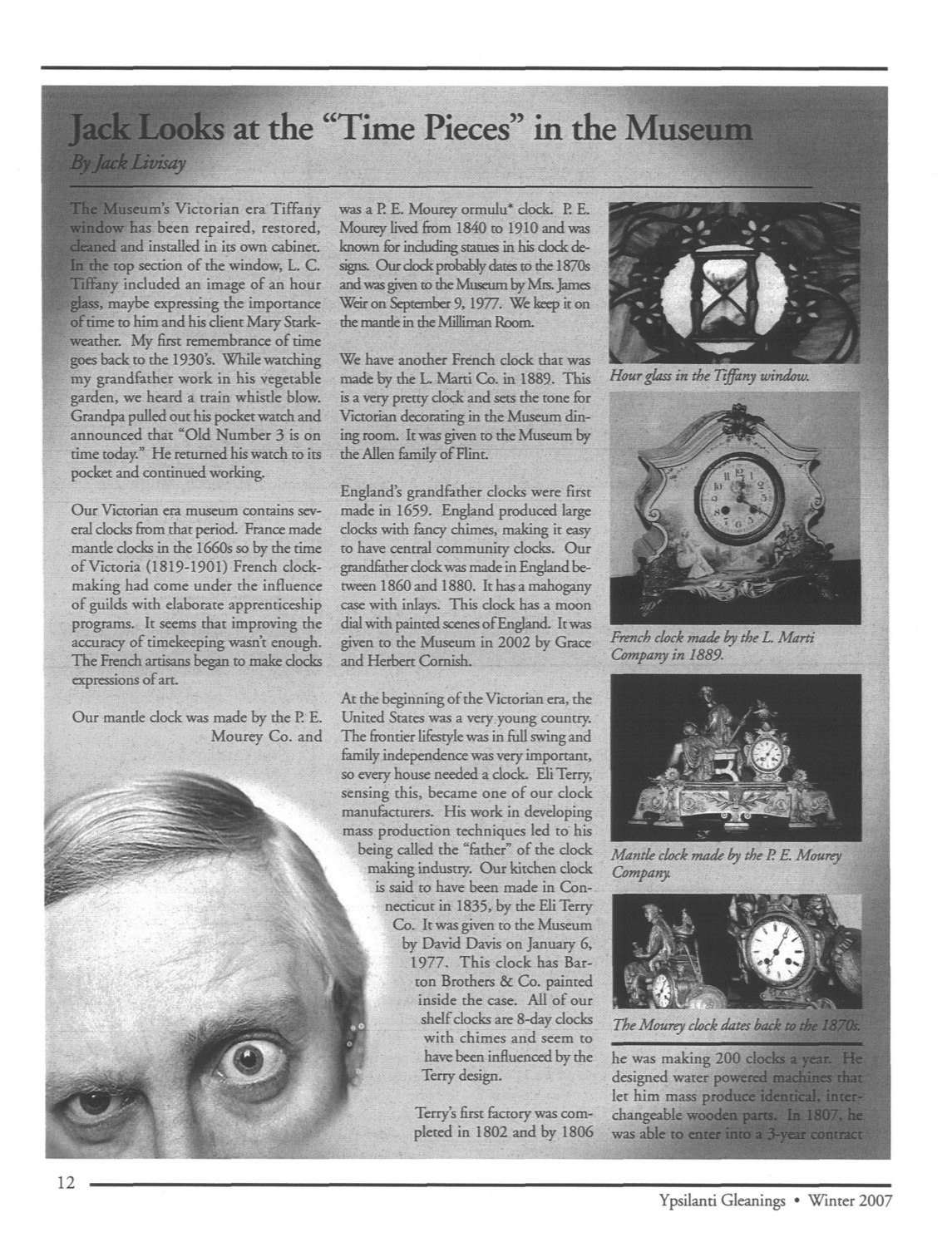 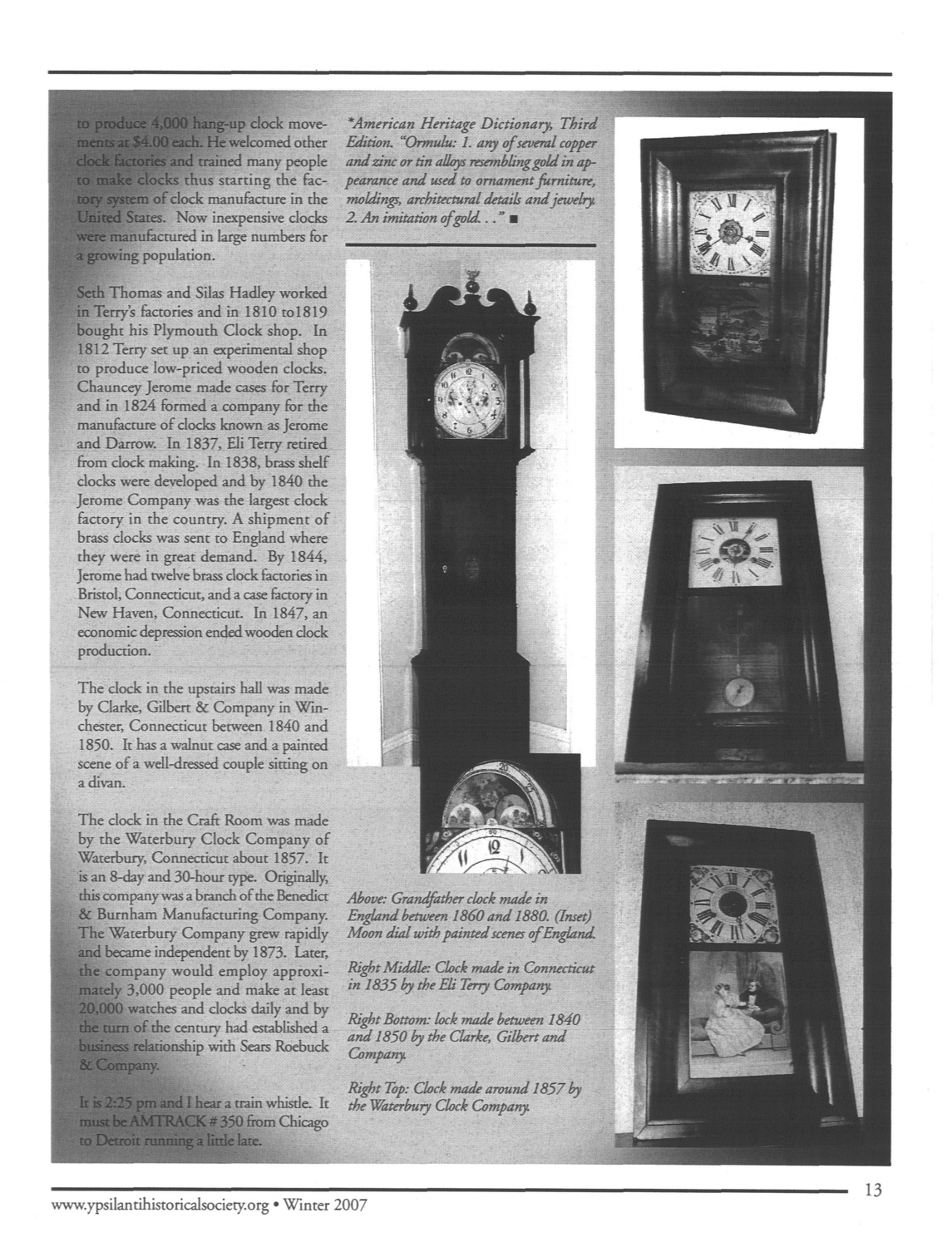 The Museum's Victorian era Tiffany window has been repaired, restored, cleaned and installed in its own cabinet. In the top section of the window, L. C. Tiffany included an image of an hour glass, maybe expressing the importance of time to him and his client Mary Starkweather. My first remembrance of time goes back to the 1930's. While watching my grandfather work in his vegetable garden, we heard a train whistle blow. Grandpa pulled out his pocket watch and announced that “Old Number 3 is on time today.” He returned his watch to its pocket and continued working.

Our Victorian era museum contains several clocks from that period. France made mantle clocks in the 1660s so by the time of Victoria (1819-1901) French clock-making had come under the influence of guilds with elaborate apprenticeship programs. It seems that improving the accuracy of timekeeping wasn't enough. The French artisans began to make clocks expressions of art.

Our mantle clock was made by the P. E. Mourey Co. and was a P. E. Mourey ormulu* clock. P. E. Mourey lived from 1840 to 1910 and was known for including statues in his clock designs. Our clock probably dates to the 1870s and was given to the Museum by Mrs. James Weir on September 9, 1977. We keep it on the mantle in the Milliman Room.

We have another French clock that was made by the L. Marti Co. in 1889. This is a very pretty clock and sets the tone for Victorian decorating in the Museum dining room. It was given to the Museum by the Allen family of Flint.

England's grandfather clocks were first made in 1659. England produced large clocks with fancy chimes, making it easy to have central community clocks. Our grandfather clock was made in England between 1860 and 1880. It has a mahogany case with inlays. This clock has a moon dial with painted scenes of England. It was given to the Museum in 2002 by Grace and Herbert Cornish.

At the beginning of the Victorian era, the United States was a very young country. The frontier lifestyle was in full swing and family independence was very important, so every house needed a clock. Eli Terry, sensing this, became one of our clock manufacturers. His work in developing mass production techniques led to his being called the “father” of the clock making industry. Our kitchen clock is said to have been made in Connecticut in 1835, by the Eli Terry Co. It was given to the Museum by David Davis on January 6, 1977. This clock has Barton Brothers & Co. painted inside the case. All of our shelf clocks are 8-day clocks with chimes and seem to have been influenced by the Terry design.

Hour glass in the Tiffany window.

French clock made by the L. Marti Company in 1889.

Mantle clock made by the P. E. Mourey Company.

The Mourey clock dates back to the 1870s.

Terry's first factory was completed in 1802 and by 1806 he was making 200 clocks a year. He designed water powered machines that let him mass produce identical, interchangeable wooden parts. In 1807, he was able to enter into a 3-year contract to produce 4,000 hang-up clock movements at &dollar;4.00 each. He welcomed other clock factories and trained many people to make clocks thus starting the factory system of clock manufacture in the United States. Now inexpensive clocks were manufactured in large numbers for a growing population.

Seth Thomas and Silas Hadley worked in Terry's factories and in 1810 to 1819 bought his Plymouth Clock shop. In 1812 Terry set up an experimental shop to produce low-priced wooden clocks. Chauncey Jerome made cases for Terry and in 1824 formed a company for the manufacture of clocks known as Jerome and Darrow. In 1837, Eli Terry retired from clock making. In 1838, brass shelf clocks were developed and by 1840 the Jerome Company was the largest clock factory in the country. A shipment of brass clocks was sent to England where they were in great demand. By 1844, Jerome had twelve brass clock factories in Bristol, Connecticut, and a case factory in New Haven, Connecticut. In 1847, an economic depression ended wooden clock production.

The clock in the upstairs hall was made by Clarke, Gilbert & Company in Winchester, Connecticut between 1840 and 1850. It has a walnut case and a painted scene of a well-dressed couple sitting on a divan.

The clock in the Craft Room was made by the Waterbury Clock Company of Waterbury, Connecticut about 1857. It is an 8-day and 30-hour type. Originally, this company was a branch of the Benedict & Burnham Manufacturing Company. The Waterbury Company grew rapidly and became independent by 1873. Later, the company would employ approximately 3,000 people and make at least 20,000 watches and clocks daily and by the turn of the century had established a business relationship with Sears Roebuck & Company.

It is 2:25 pm and I hear a train whistle. It must be AMTRACK #350 from Chicago to Detroit running a little late.

Grandfather clock made in England between 1860 and 1880. (Inset) Moon dial with painted scenes of England.

Clock made in Connecticut in 1835 by the Eli Terry Company.

Clock made around 1857 by the Waterbury Clock Company