YHS Archives-You Never Know What You Will Find! 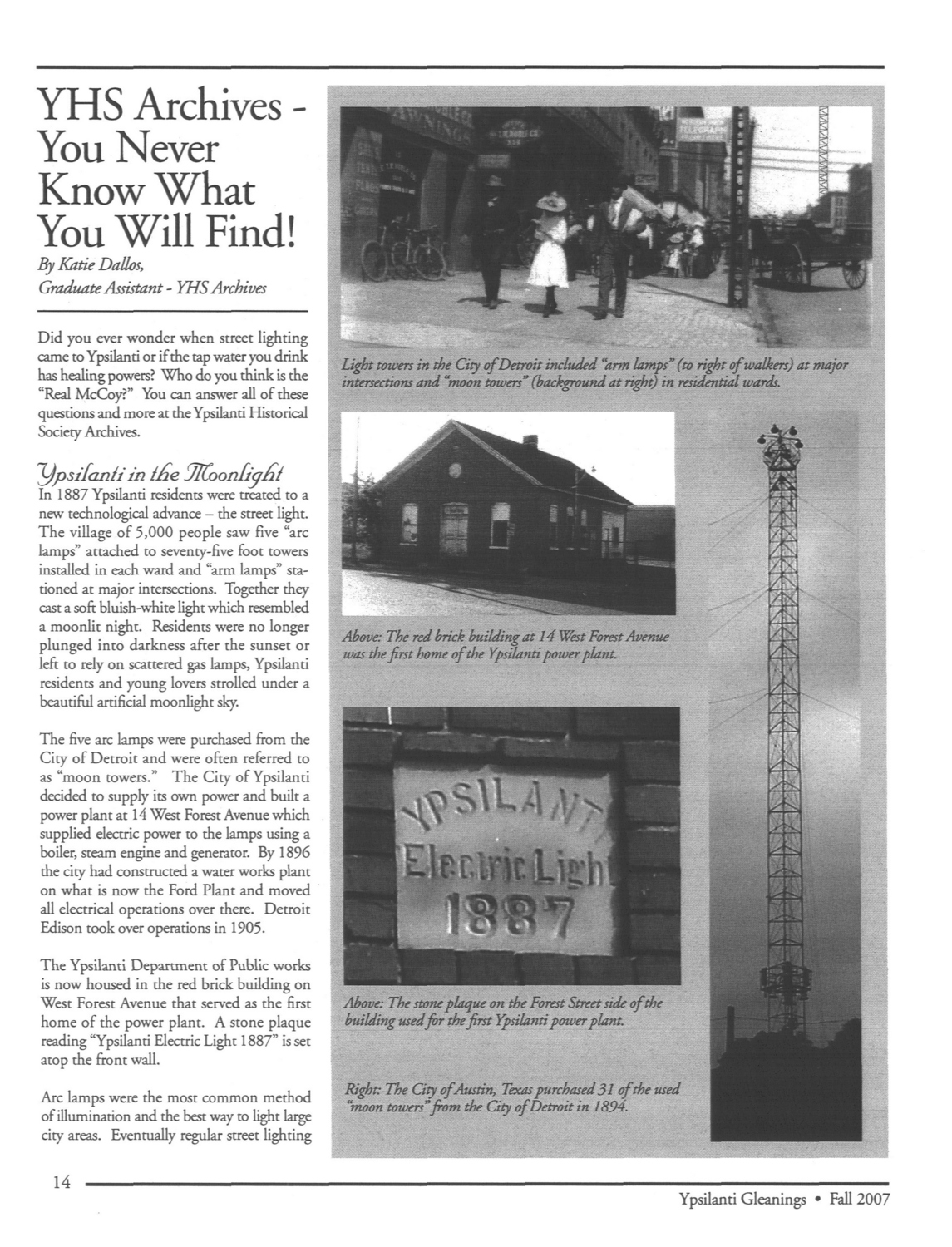 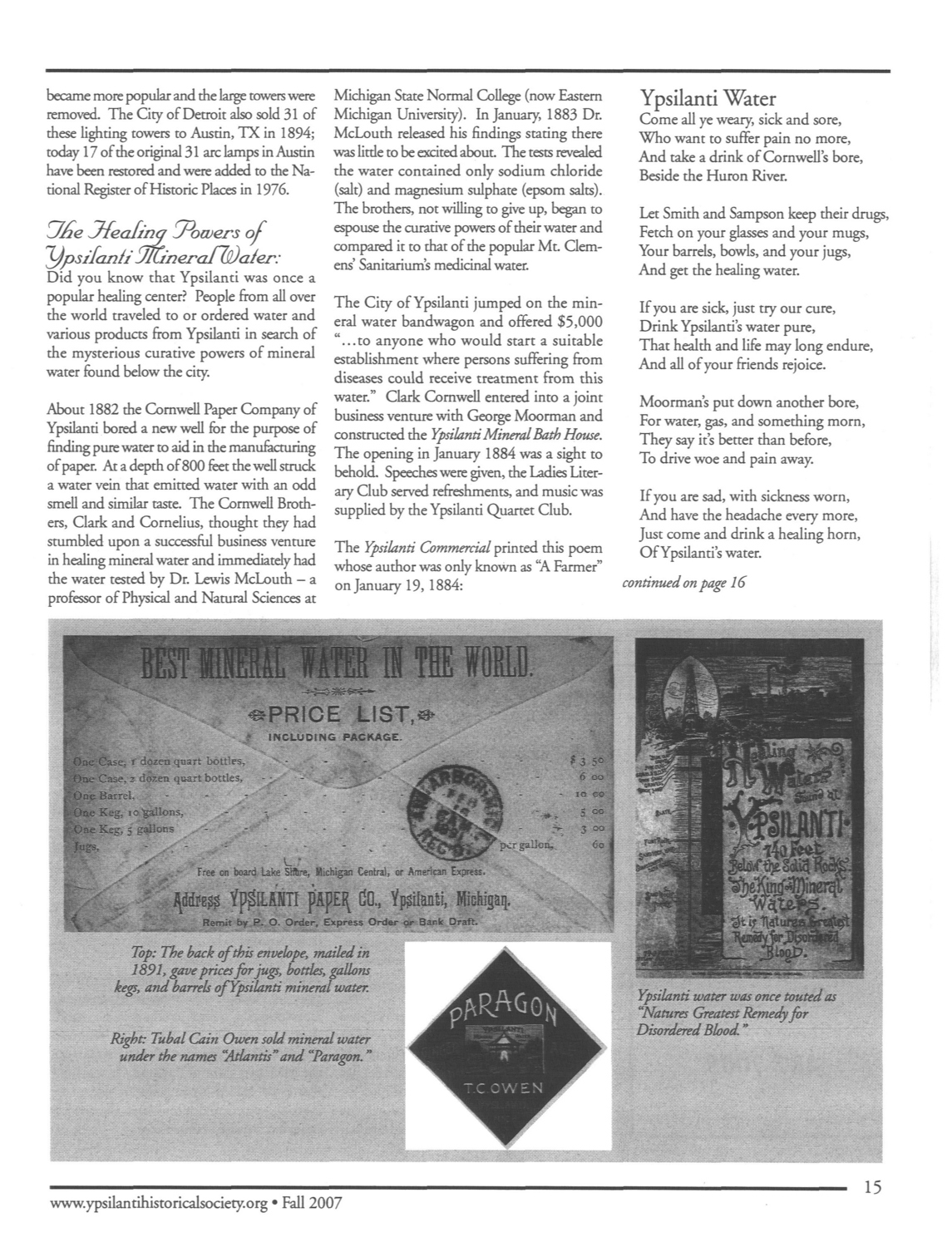 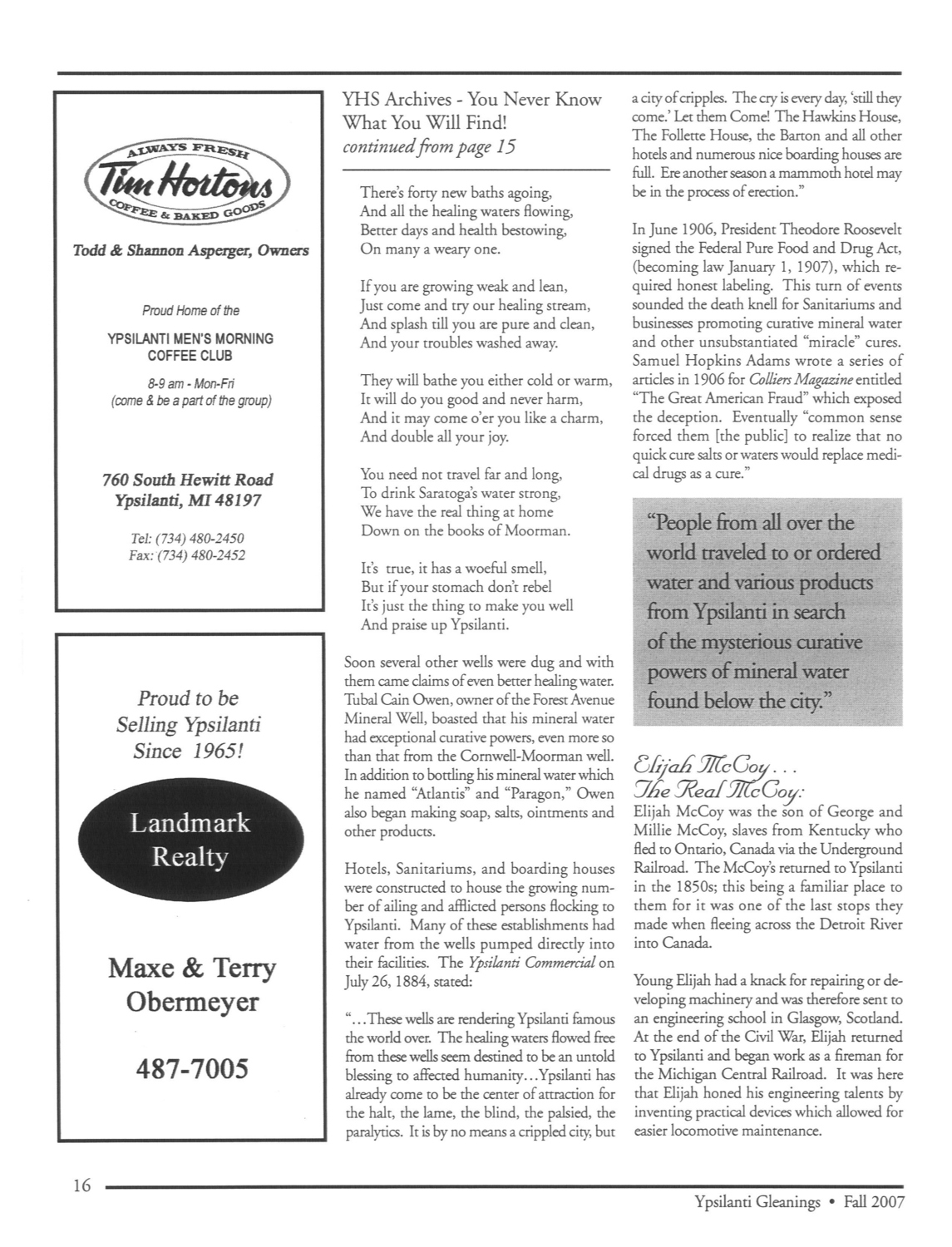 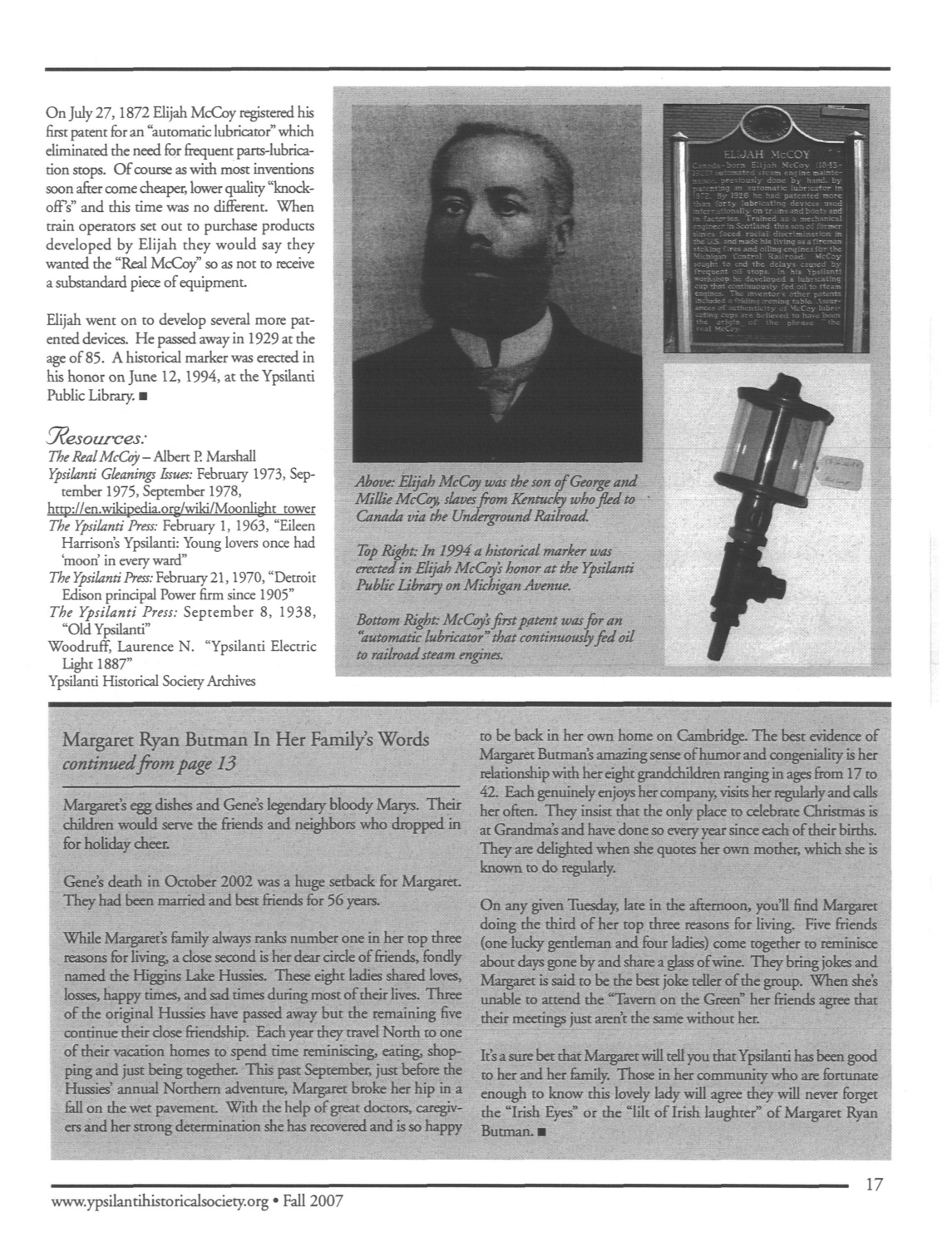 Did you ever wonder when street lighting came to Ypsilanti or if the tap water you drink has healing powers? Who do you think is the “Real McCoy?” You can answer all of these questions and more at the Ypsilanti Historical Society Archives.

Ypsilanti in the Moonlight

In 1887 Ypsilanti residents were treated to a new technological advance-the street light. The village of 5,000 people saw five “arc lamps” attached to seventy-five foot towers installed in each ward and “arm lamps” stationed at major intersections. Together they cast a soft bluish-white light which resembled a moonlit night. Residents were no longer plunged into darkness after the sunset or left to rely on scattered gas lamps, Ypsilanti residents and young lovers strolled under a beautiful artificial moonlight sky.

The five arc lamps were purchased from the City of Detroit and were often referred to as “moon towers.” The City of Ypsilanti decided to supply its own power and built a power plant at 14 West Forest Avenue which supplied electric power to the lamps using a boiler, steam engine and generator. By 1896 the city had constructed a water works plant on what is now the Ford Plant and moved all electrical operations over there. Detroit Edison took over operations in 1905.

The Ypsilanti Department of Public works is now housed in the red brick building on West Forest Avenue that served as the first home of the power plant. A stone plaque reading “Ypsilanti Electric Light 1887” is set atop the front wall.

Arc lamps were the most common method of illumination and the best way to light large city areas. Eventually regular street lighting became more popular and the large towers were removed. The City of Detroit also sold 31 of these lighting towers to Austin, TX in 1894; today 17 of the original 31 arc lamps in Austin have been restored and were added to the National Register of Historic Places in 1976.

Did you know that Ypsilanti was once a popular healing center? People from all over the world traveled to or ordered water and various products from Ypsilanti in search of the mysterious curative powers of mineral water found below the city.

About 1882 the Cornwell Paper Company of Ypsilanti bored a new well for the purpose of finding pure water to aid in the manufacturing of paper. At a depth of 800 feet the well struck a water vein that emitted water with an odd smell and similar taste. The Cornwell Brothers, Clark and Cornelius, thought they had stumbled upon a successful business venture in healing mineral water and immediately had the water tested by Dr. Lewis McLouth-a professor of Physical and Natural Sciences at Michigan State Normal College (now Eastern Michigan University). In January, 1883 Dr. McLouth released his findings stating there was little to be excited about. The tests revealed the water contained only sodium chloride (salt) and magnesium sulphate (epsom salts). The brothers, not willing to give up, began to espouse the curative powers of their water and compared it to that of the popular Mt. Clemens' Sanitarium's medicinal water.

The City of Ypsilanti jumped on the mineral water bandwagon and offered &dollar;5,000…to anyone who would start a suitable establishment where persons suffering from diseases could receive treatment from this water.” Clark Cornwell entered into a joint business venture with George Moorman and constructed the Ypsilanti Mineral Bath House. The opening in January 1884 was a sight to behold. Speeches were given, the Ladies Literary Club served refreshments, and music was supplied by the Ypsilanti Quarter Club.

Come all ye weary, sick and sore, Who want to suffer pain no more, And take a drink of Cornwell's bore, Beside the Huron River.

Let Smith and Sampson keep their drugs, Fetch on your glasses and your mugs, Your barrels, bowls, and your jugs, And get the healing water.

If you are sick, just try our cure, Drink Ypsilanti's water pure, That health and life may long endure, And all of your friends rejoice.

Moorman's put down another bore, For water, gas, and something morn, They say it's better than before, To drive woe and pain away.

If you are sad, with sickness worn, And have the headache every more, Just come and drink a healing horn, Of Ypsilanti's water.

There's forty new baths agoing, And all the healing waters flowing, Better days and health bestowing, On many a weary one.

If you are growing weak and lean, Just come and try our healing stream, And splash till you are pure and clean, And your troubles washed away.

They will bathe you either cold or warm, It will do you good and never harm, And it may come o'er you like a charm, And double all your joy.

You need not travel far and long, To drink Saratoga's water strong, We have the real thing at home Down on the books of Moorman.

It's true, it has a woeful smell, But if your stomach don't rebel It's just the thing to make you well And praise up Ypsilanti.

Soon several other wells were dug and with them came claims of even better healing water. Tubal Cain Owen, owner of the Forest Avenue Mineral Well, boasted that his mineral water had exceptional curative powers, even more so than that from the Cornwell-Moorman well. In addition to bottling his mineral water which he named “Atlantis” and “Paragon,” Owen also began making soap, salts, ointments and other products.

Hotels, Sanitariums, and boarding houses were constructed to house the growing number of ailing and afflicted persons flocking to Ypsilanti. Many of these establishments had water from the wells pumped directly into their facilities. The Ypsilanti Commercial on July 26, 1884, stated:

“…These wells are rendering Ypsilanti famous the world over. The healing waters flowed free from these wells seem destined to be an untold blessing to affected humanity…Ypsilanti has already come to be the center of attraction for the halt, the lame, the blind, the palsied, the paralytics. It is by no means a crippled city, but a city of cripples. The cry is every day, ‘still they come.’ Let them Come! The Hawkins House, The Follette House, the Barton and all other hotels and numerous nice boarding houses are full. Ere another season a mammoth hotel may be in the process of erection.”

In June 1906, President Theodore Roosevelt signed the Federal Pure Food and Drug Act, (becoming law January 1, 1907), which required honest labeling. This turn of events sounded the death knell for Sanitariums and businesses promoting curative mineral water and other unsubstantiated “miracle” cures. Samuel Hopkins Adams wrote a series of articles in 1906 for Colliers Magazine entitled “The Great American Fraud” which exposed the deception. Eventually “common sense forced them [the public] to realize that no quick cure salts or waters would replace medical drugs as a cure.”

“People from all over the world traveled to or ordered water and various products from Ypsilanti in search of the mysterious curative powers of mineral water found below the city.”

Elijah McCoy was the son of George and Millie McCoy, slaves from Kentucky who fled to Ontario, Canada via the Underground Railroad. The McCoy's returned to Ypsilanti in the 1850s; this being a familiar place to them for it was one of the last stops they made when fleeing across the Detroit River into Canada.

Young Elijah had a knack for repairing or developing machinery and was therefore sent to an engineering school in Glasgow, Scotland. At the end of the Civil War, Elijah returned to Ypsilanti and began work as a fireman for the Michigan Central Railroad. It was here that Elijah honed his engineering talents by inventing practical devices which allowed for easier locomotive maintenance.

On July 27, 1872 Elijah McCoy registered his first patent for an “automatic lubricator” which climinated the need for frequent parts-lubrication stops. Of course as with most inventions soon after come cheaper, lower quality “knock-off's” and this time was no different. When train operators set out to purchase products developed by Elijah they would say they wanted the “Real McCoy” so as not to receive a substandard piece of equipment.

Elijah went on to develop several more patented devices. He passed away in 1929 at the age of 85. A historical marker was erected in his honor on June 12, 1994, at the Ypsilanti Public Library.

The Ypsilanti Press: February 1, 1963, “Eileen Harrison's Ypsilanti: Young lovers once had ‘moon’ in every ward”