Mellencamp's - The Center of My "Village" 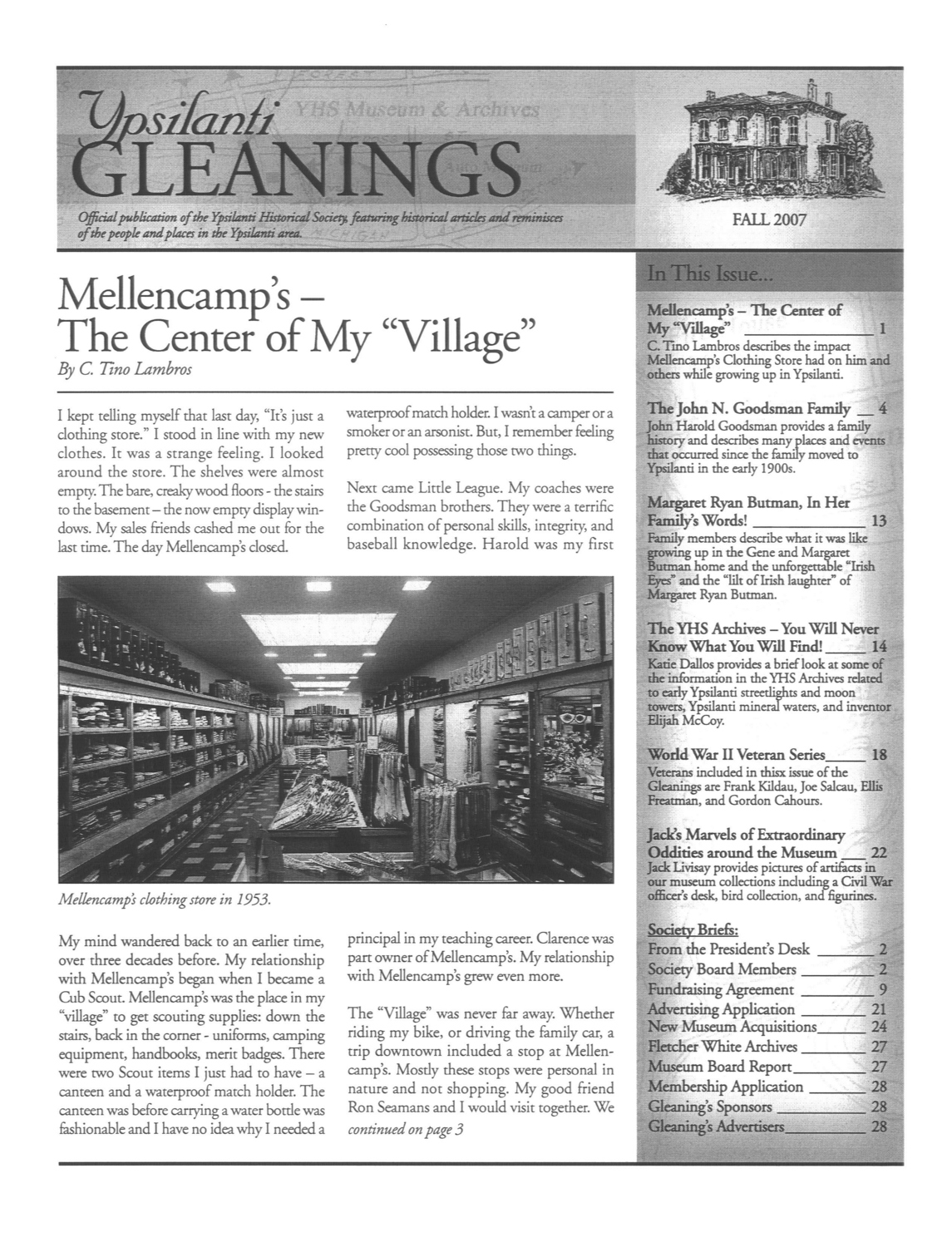 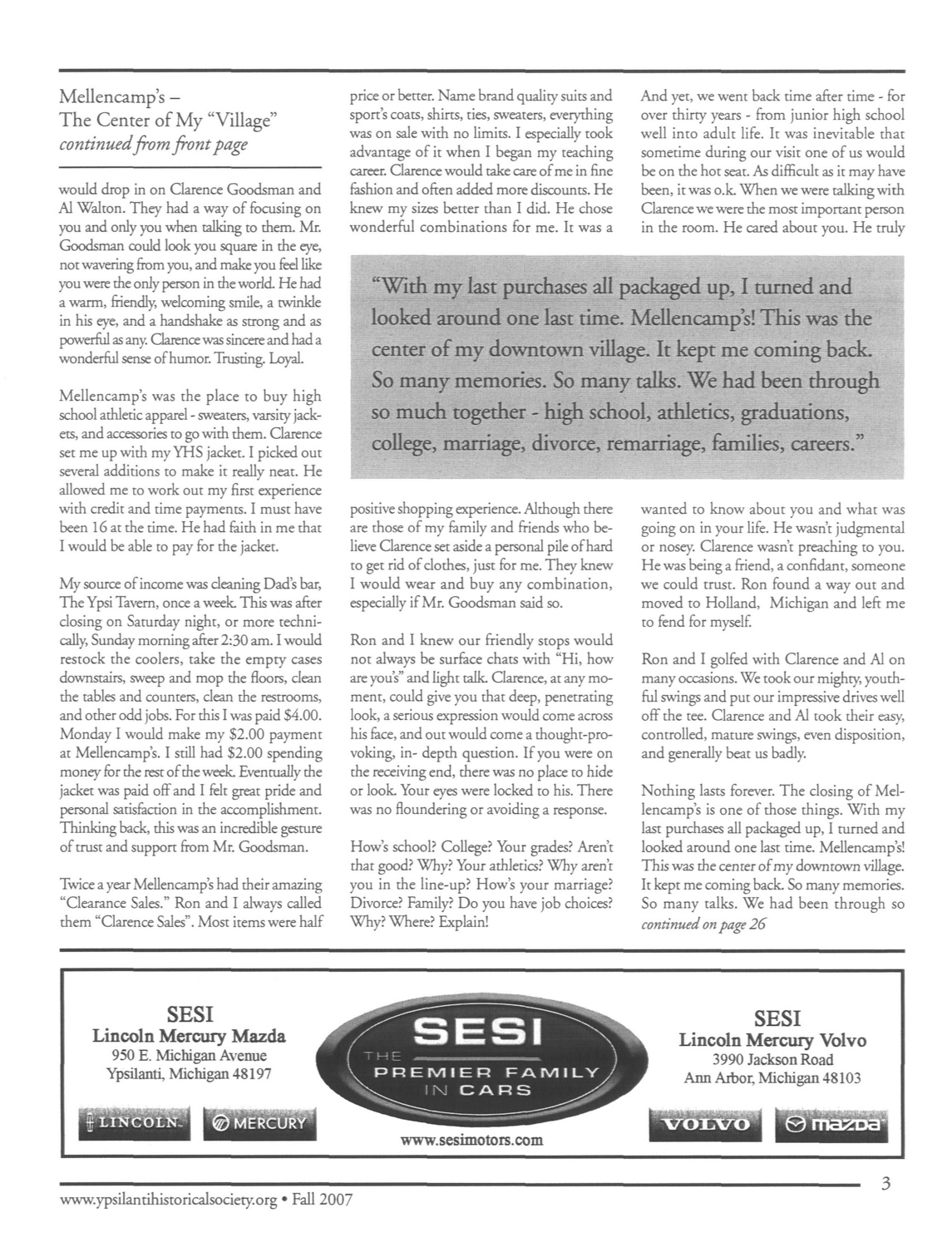 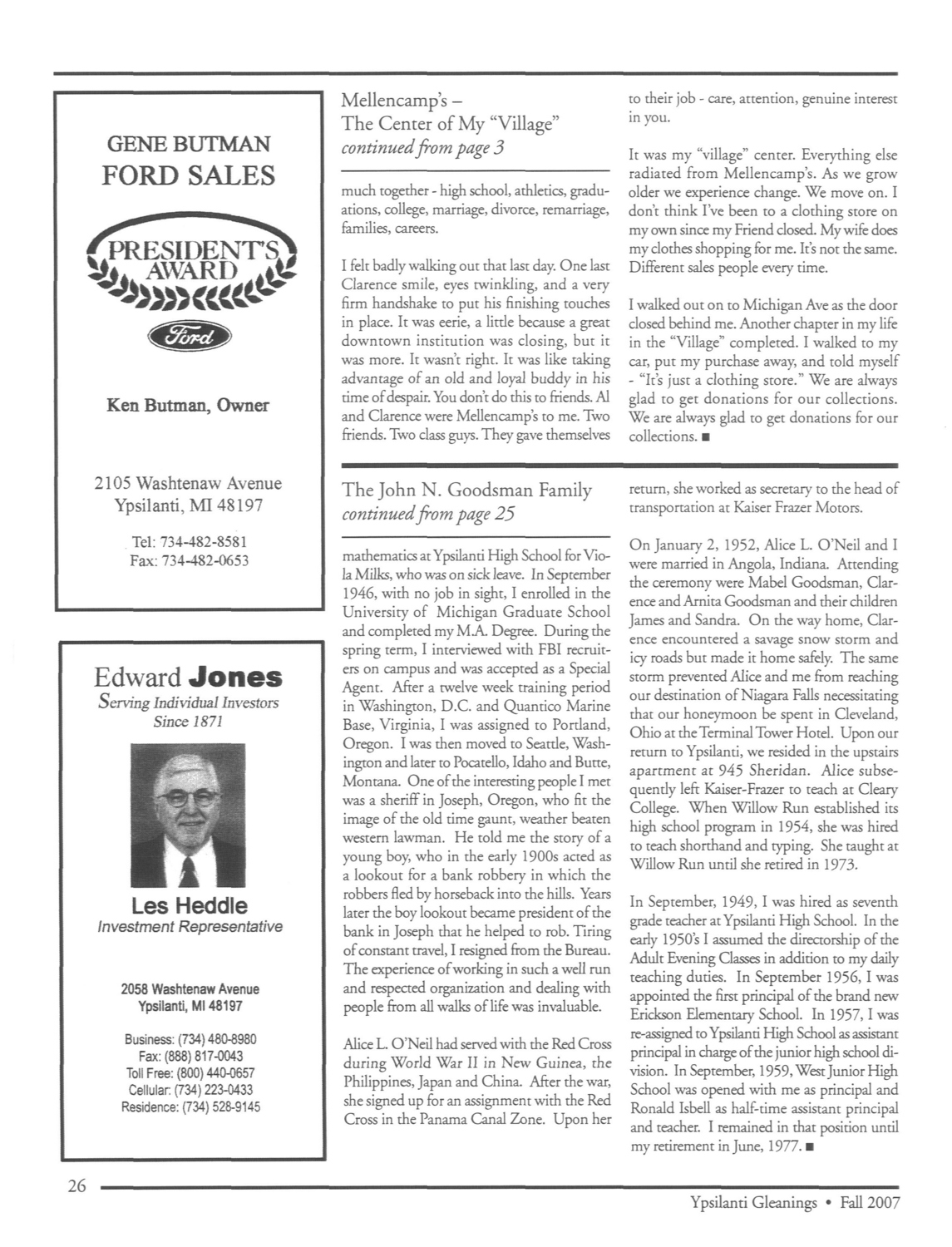 I kept telling myself that last day, “It's just a clothing store.” I stood in line with my new clothes. It was a strange feeling. I looked around the store. The shelves were almost empty. The bare, creaky wood floors-the stairs to the basement-the now empty display windows. My sales friends cashed me out for the last time. The day Mellencamp's closed.

My mind wandered back to an earlier time, over three decades before. My relationship with Mellencamp's began when I became a Cub Scout. Mellencamp's was the place in my “village” to get scouting supplies: down the stairs, back in the corner-uniforms, camping equipment, handbooks, merit badges. There were two Scout items I just had to have-a canteen and a waterproof match holder. The canteen was before carrying a water bottle was fashionable and I have no idea why I needed a waterproof match holder. I wasn't a camper or a smoker or an arsonist. But, I remember feeling pretty cool possessing those two things.

Next came Little League. My coaches were the Goodsman brothers. They were a terrific combination of personal skills, integrity, and baseball knowledge. Harold was my first principal in my teaching career. Clarence was part owner of Mellencamp's. My relationship with Mellencamp's grew even more.

The “Village” was never far away. Whether riding my bike, or driving the family car, a trip downtown included a stop at Mellencamp's. Mostly these stops were personal in nature and not shopping. My good friend Ron Seamans and I would visit together. We would drop in on Clarence Goodsman and Al Walton. They had a way of focusing on you and only you when talking to them. Mr. Goodsman could look you square in the eye, not wavering from you, and make you feel like you were the only person in the world. He had a warm, friendly, welcoming smile, a twinkle in his eye, and a handshake as strong and as powerful as any. Clarence was sincere and had a wonderful sense of humor. Trusting. Loyal.

Mellencamp's was the place to buy high school athletic apparel-sweaters, varsity jackets, and accessories to go with them. Clarence set me up with my YHS jacket. I picked out several additions to make it really neat. He allowed me to work out my first experience with credit and time payments. I must have been 16 at the time. He had faith in me that I would be able to pay for the jacket.

My source of income was cleaning Dad's bar, The Ypsi Tavern, once a week. This was after closing on Saturday night, or more technically, Sunday morning after 2:30 am. I would restock the coolers, take the empty cases downstairs, sweep and mop the floors, clean the tables and counters, clean the restrooms, and other odd jobs. For this I was paid &dollar;4.00. Monday I would make my &dollar;2.00 payment at Mellencamp's. I still had &dollar;2.00 spending money for the rest of the week. Eventually the jacket was paid off and I felt great pride and personal satisfaction in the accomplishment. Thinking back, this was an incredible gesture of trust and support from Mr. Goodsman.

Twice a year Mellencamp's had their amazing “Clearance Sales.” Ron and I always called them “Clarence Sales”. Most items were half price or better. Name brand quality suits and sport's coats, shirts, ties, sweaters, everything was on sale with no limits. I especially took advantage of it when I began my teaching career. Clarence would take care of me in fine fashion and often added more discounts. He knew my sizes better than I did. He chose wonderful combinations for me. It was a positive shopping experience. Although there are those of my family and friends who believe Clarence set aside a personal pile of hard to get rid of clothes, just for me. They knew I would wear and buy any combination, especially if Mr. Goodsman said so.

"
“With my last purchases all packaged up, I turned and looked around one last time. Mellencamp's! This was the center of my downtown village. It kept me coming back. So many memories. So many talks. We had been through so much together-high school, athletics, graduations, college, marriage, divorce, remarriage, families, careers.“"

Ron and I knew our friendly stops would not always be surface chats with “Hi, how are you's” and light talk. Clarence, at any moment, could give you that deep, penetrating look, a serious expression would come across his face, and out would come a thought-provoking, in-depth question. If you were on the receiving end, there was no place to hide or look. Your eyes were locked to his. There was no floundering or avoiding a response.

How's school? College? Your grades? Aren't that good? Why? Your athletics? Why aren't you in the line-up? How's your marriage? Divorce? Family? Do you have job choices? Why? Where? Explain!

And yet, we went back time after time-for over thirty years-from junior high school well into adult life. It was inevitable that sometime during our visit one of us would be on the hot seat. As difficult as it may have been, it was o.k. When we were talking with Clarence we were the most important person in the room. He cared about you. He truly wanted to know about you and what was going on in your life. He wasn't judgmental or nosey. Clarence wasn't preaching to you. He was being a friend, a confidant, someone we could trust. Ron found a way out and moved to Holland, Michigan and left me to fend for myself.

Ron and I golfed with Clarence and Al on many occasions. We took our mighty, youthful swings and put our impressive drives well off the tee. Clarence and Al took their easy, controlled, mature swings, even disposition, and generally beat us badly.

Nothing lasts forever. The closing of Mellencamp's is one of those things. With my last purchases all packaged up, I turned and looked around one last time. Mellencamp's! This was the center of my downtown village. It kept me coming back. So many memories. So many talks. We had been through so much together-high school, athletics, graduations, college, marriage, divorce, remarriage, families, careers.

I felt badly walking out that last day. One last Clarence smile, eyes twinkling, and a very firm handshake to put his finishing touches in place. It was eerie, a little because a great downtown institution was closing, but it was more. It wasn't right. It was like taking advantage of an old and loyal buddy in his time of despair. You don't do this to friends. Al and Clarence were Mellencamp's to me. Two friends. Two class guys. They gave themselves to their job-care, attention, genuine interest in you.

It was my “village” center. Everything else radiated from Mellencamp's. As we grow older we experience change. We move on. I don't think I've been to a clothing store on my own since my Friend closed. My wife does my clothes shopping for me. It's not the same. Different sales people every time.