Is Elijah the “Real McCoy”? 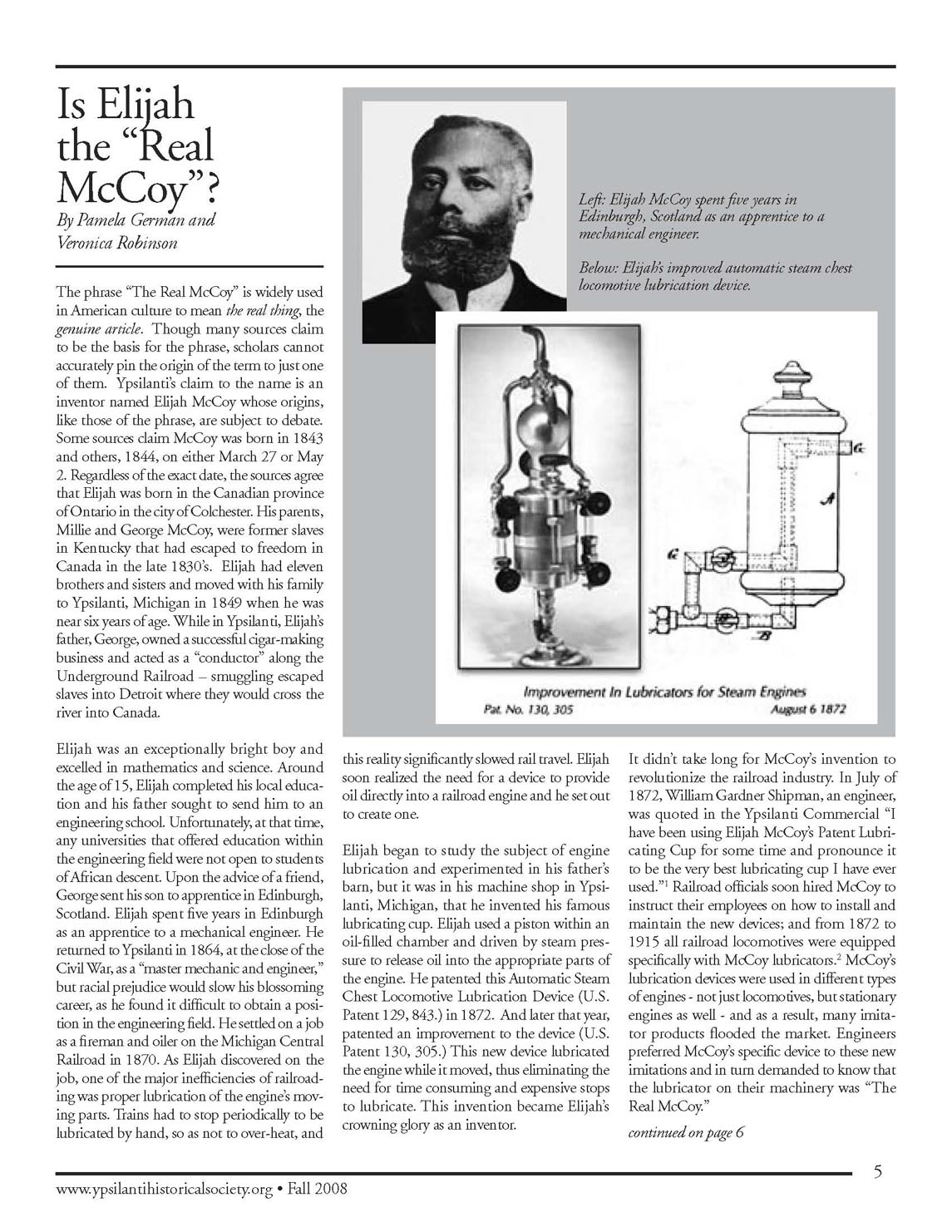 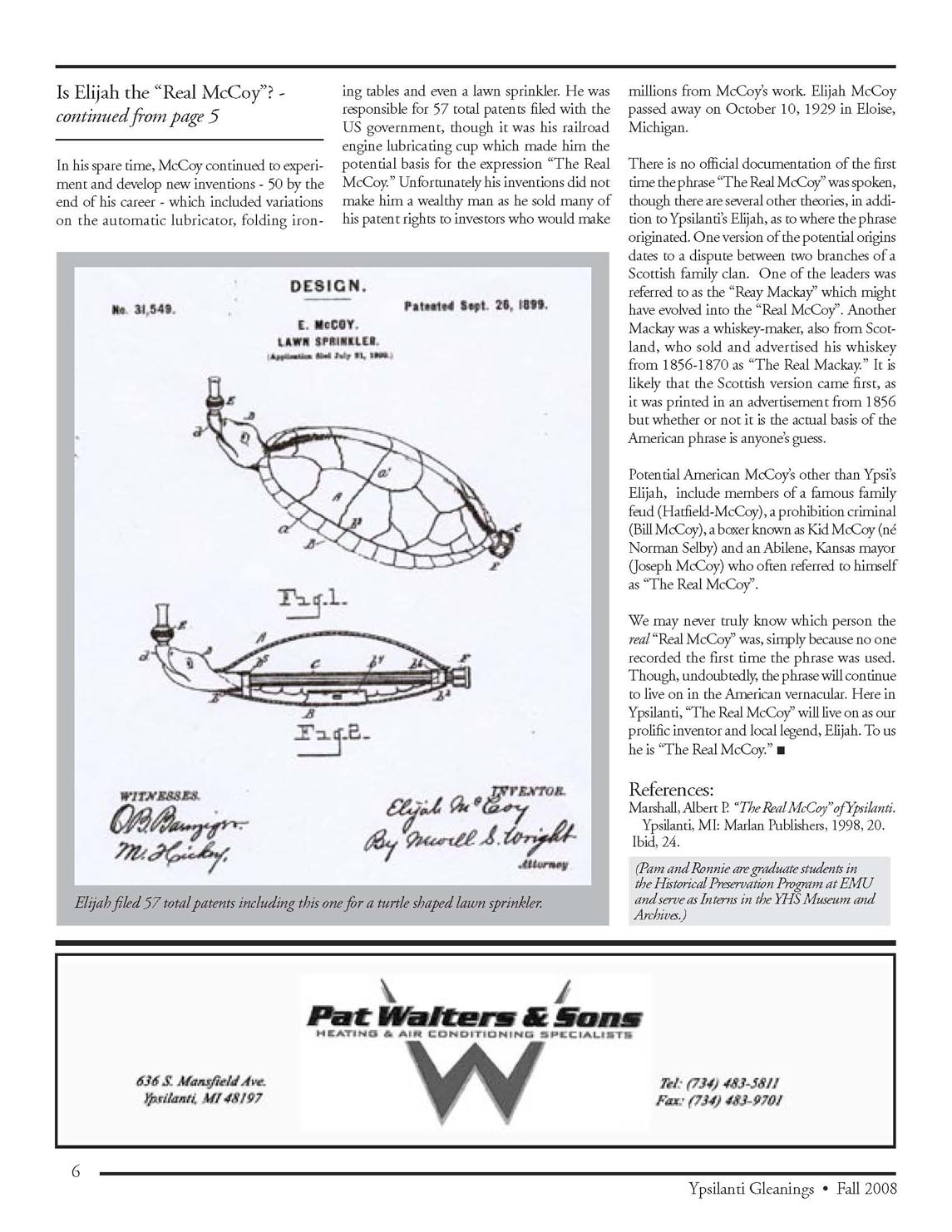 The phrase “The Real McCoy” is widely used in American culture to mean the real thing, the genuine article. Though many sources claim to be the basis for the phrase, scholars cannot accurately pin the origin of the term to just one of them. Ypsilanti’s claim to the name is an inventor named Elijah McCoy whose origins, like those of the phrase, are subject to debate. Some sources claim McCoy was born in 1843 and others, 1844, on either March 27 or May 2. Regardless of the exact date, the sources agree that Elijah was born in the Canadian province of Ontario in the city of Colchester. His parents, Millie and George McCoy, were former slaves in Kentucky that had escaped to freedom in Canada in the late 1830’s. Elijah had eleven brothers and sisters and moved with his family to Ypsilanti, Michigan in 1849 when he was near six years of age. While in Ypsilanti, Elijah’s father, George, owned a successful cigar-making business and acted as a “conductor” along the Underground Railroad – smuggling escaped slaves into Detroit where they would cross the river into Canada

Elijah was an exceptionally bright boy and excelled in mathematics and science. Around the age of 15, Elijah completed his local education and his father sought to send him to an engineering school. Unfortunately, at that time, any universities that offered education within the engineering field were not open to students of African descent. Upon the advice of a friend, George sent his son to apprentice in Edinburgh, Scotland. Elijah spent five years in Edinburgh as an apprentice to a mechanical engineer. He returned to Ypsilanti in 1864, at the close of the Civil War, as a “master mechanic and engineer,” but racial prejudice would slow his blossoming career, as he found it difficult to obtain a position in the engineering field. He settled on a job as a fireman and oiler on the Michigan Central Railroad in 1870. As Elijah discovered on the job, one of the major inefficiencies of railroading was proper lubrication of the engine’s moving parts. Trains had to stop periodically to be lubricated by hand, so as not to over-heat, and this reality significantly slowed rail travel. Elijah soon realized the need for a device to provide oil directly into a railroad engine and he set out to create one.

Elijah began to study the subject of engine lubrication and experimented in his father’s barn, but it was in his machine shop in Ypsilanti, Michigan, that he invented his famous lubricating cup. Elijah used a piston within an oil-filled chamber and driven by steam pressure to release oil into the appropriate parts of the engine. He patented this Automatic Steam Chest Locomotive Lubrication Device (U.S. Patent 129, 843.) in 1872. And later that year, patented an improvement to the device (U.S. Patent 130, 305.) This new device lubricated the engine while it moved, thus eliminating the need for time consuming and expensive stops to lubricate. This invention became Elijah’s crowning glory as an inventor.

It didn’t take long for McCoy’s invention to revolutionize the railroad industry. In July of 1872, William Gardner Shipman, an engineer, was quoted in the Ypsilanti Commercial “I have been using Elijah McCoy’s Patent Lubricating Cup for some time and pronounce it to be the very best lubricating cup I have ever used.”1 Railroad officials soon hired McCoy to instruct their employees on how to install and maintain the new devices; and from 1872 to 1915 all railroad locomotives were equipped specifically with McCoy lubricators.2 McCoy’s lubrication devices were used all different types of engines - not just locomotives, but stationary engines as well - and as a result, many imitator products flooded the market. Engineers preferred McCoy’s specific device to these new imitations and in turn demanded to know that the lubricator on their machinery was “The Real McCoy.”

In his spare time, McCoy continued to experiment and develop new inventions - 50 by the end of his career - which included variations on the automatic lubricator, folding ironing tables and even a lawn sprinkler. He was responsible for 57 total patents filed with the US government, though it was his railroad engine lubricating cup which made him the potential basis for the expression “the real McCoy.” Unfortunately his inventions did not make him a wealthy man as he sold many of his patent rights to investors who would make millions from McCoy’s work. Elijah McCoy passed away on October 10, 1929 in Eloise, Michigan.

There is no official documentation of the first time the phrase “the real McCoy” was spoken, though there are several other theories, in addition to Ypsilanti’s Elijah, as to where the phrase originated. One version of the potential origins dates to a dispute between two branches of a Scottish family clan. One of the leaders was referred to as the “Reay Mackay” which might have evolved into the “real McCoy”. Another Mackay was a whiskey-maker, also from Scotland, who sold and advertised his whiskey from 1856-1870 as “the real Mackay.” It is likely that the Scottish version came first, as it was printed in an advertisement from 1856 but whether or not it is the actual basis of the American phrase is anyone’s guess.

Potential American McCoy’s other than Ypsi’s Elijah, include members of a famous family feud (Hatfield-McCoy), a prohibition criminal (Bill McCoy), a boxer known as Kid McCoy (né Norman Selby) and an Abilene, Kansas mayor (Joseph McCoy) who often referred to himself as “the real McCoy”.

We may never truly know which person the real “Real McCoy” was, simply because no one recorded the first time the phrase was used. Though, undoubtedly, the phrase will continue to live on in the American vernacular. Here in Ypsilanti, “the real McCoy” will live on as our prolific inventor and local legend, Elijah. To us he is “The Real McCoy.”

(Pam and Ronnie are graduate students in the Historical Preservation Program at EMU and serve as Interns in the YHS Museum and Archives.)

Photo 1: Elijah McCoy spent five years in Edinburgh, Scotland as an apprentice to a mechanical engineer.

Photo 3: Elijah filed 57 total patents including this one for a turtle shaped lawn sprinkler