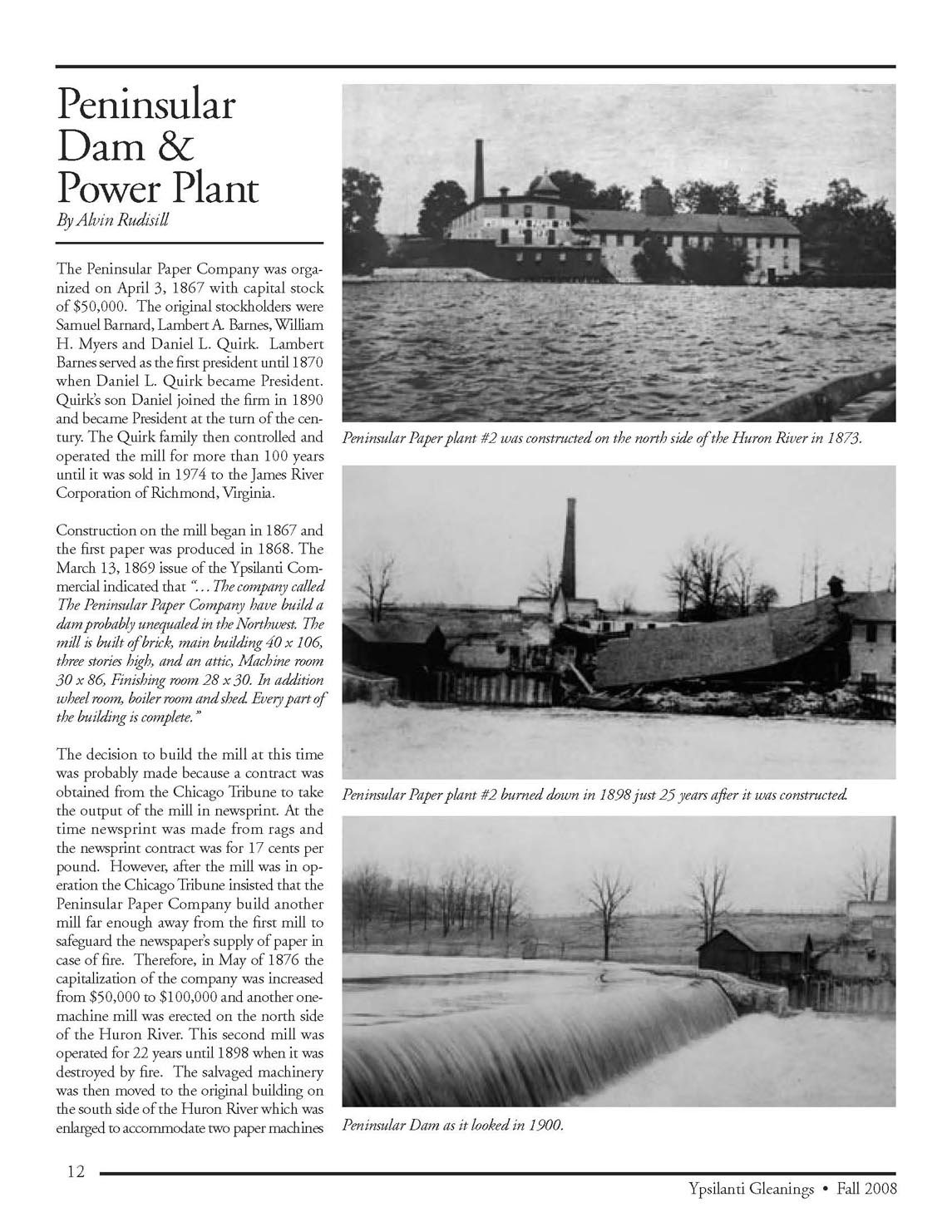 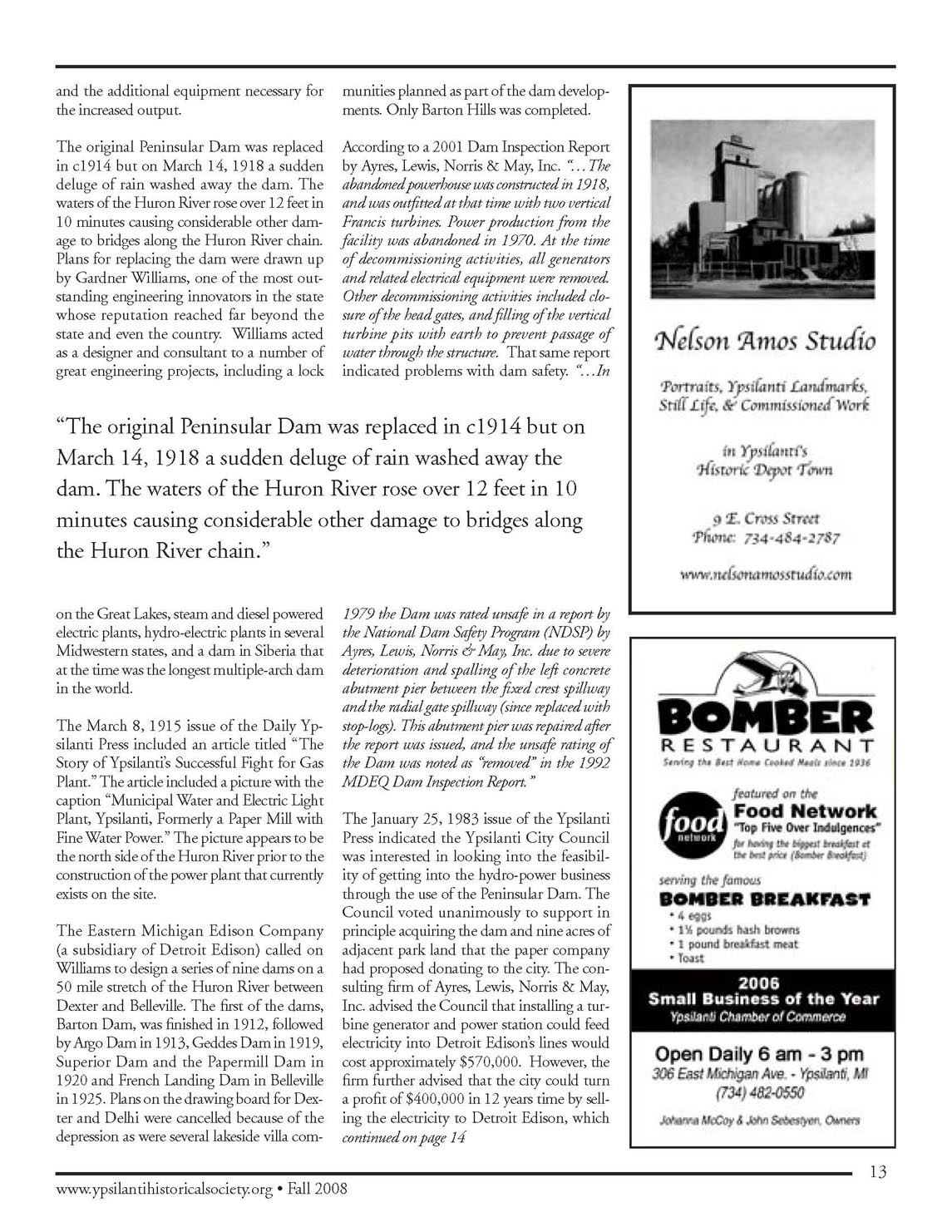 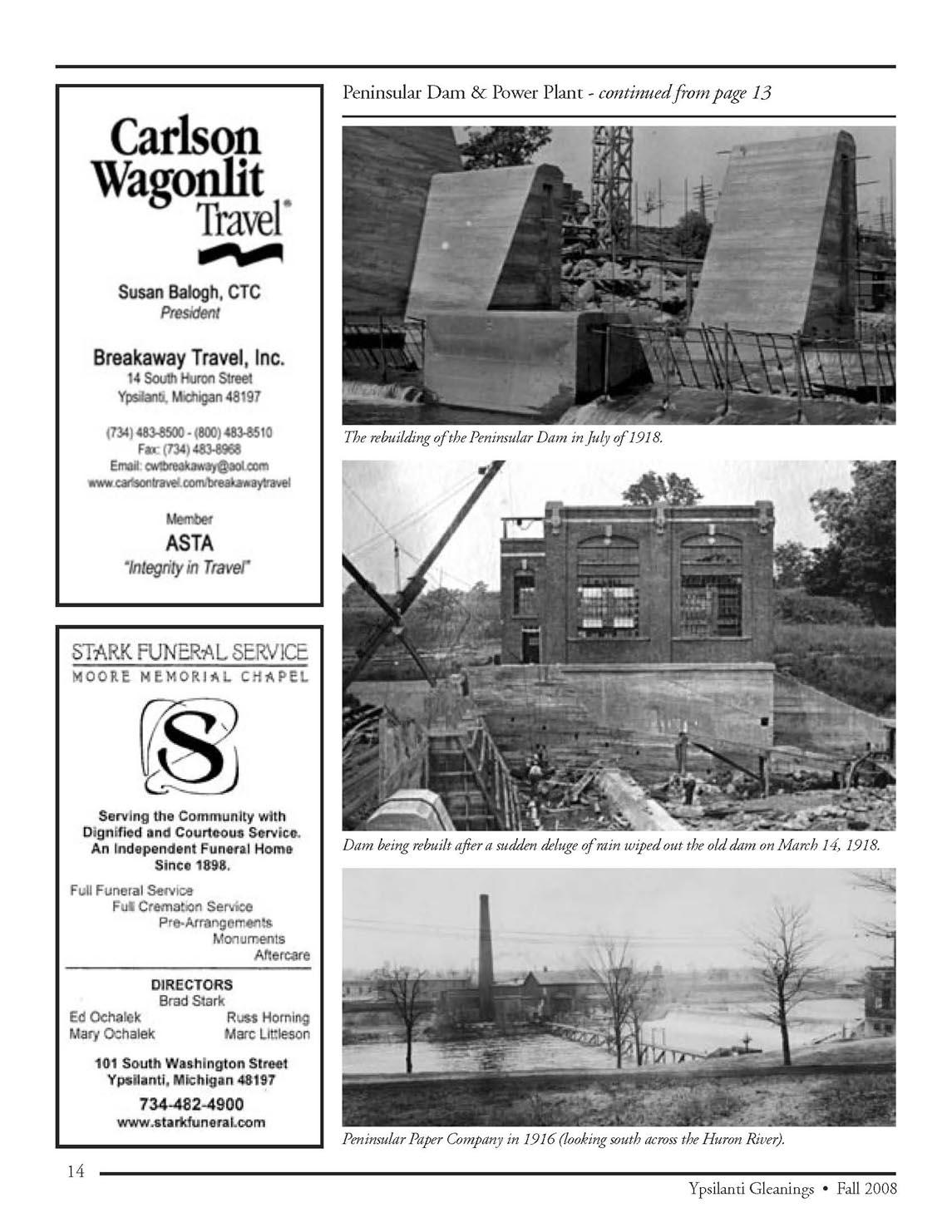 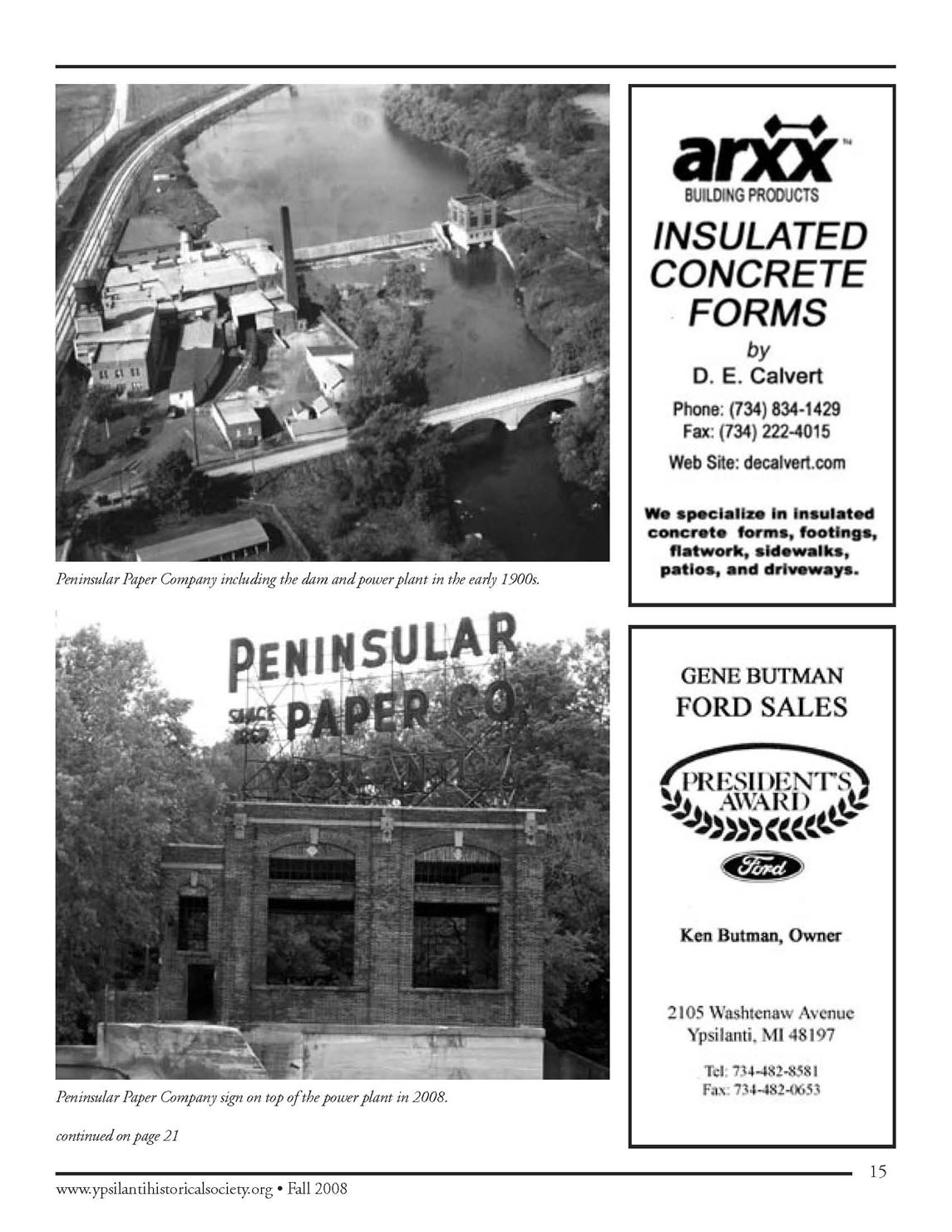 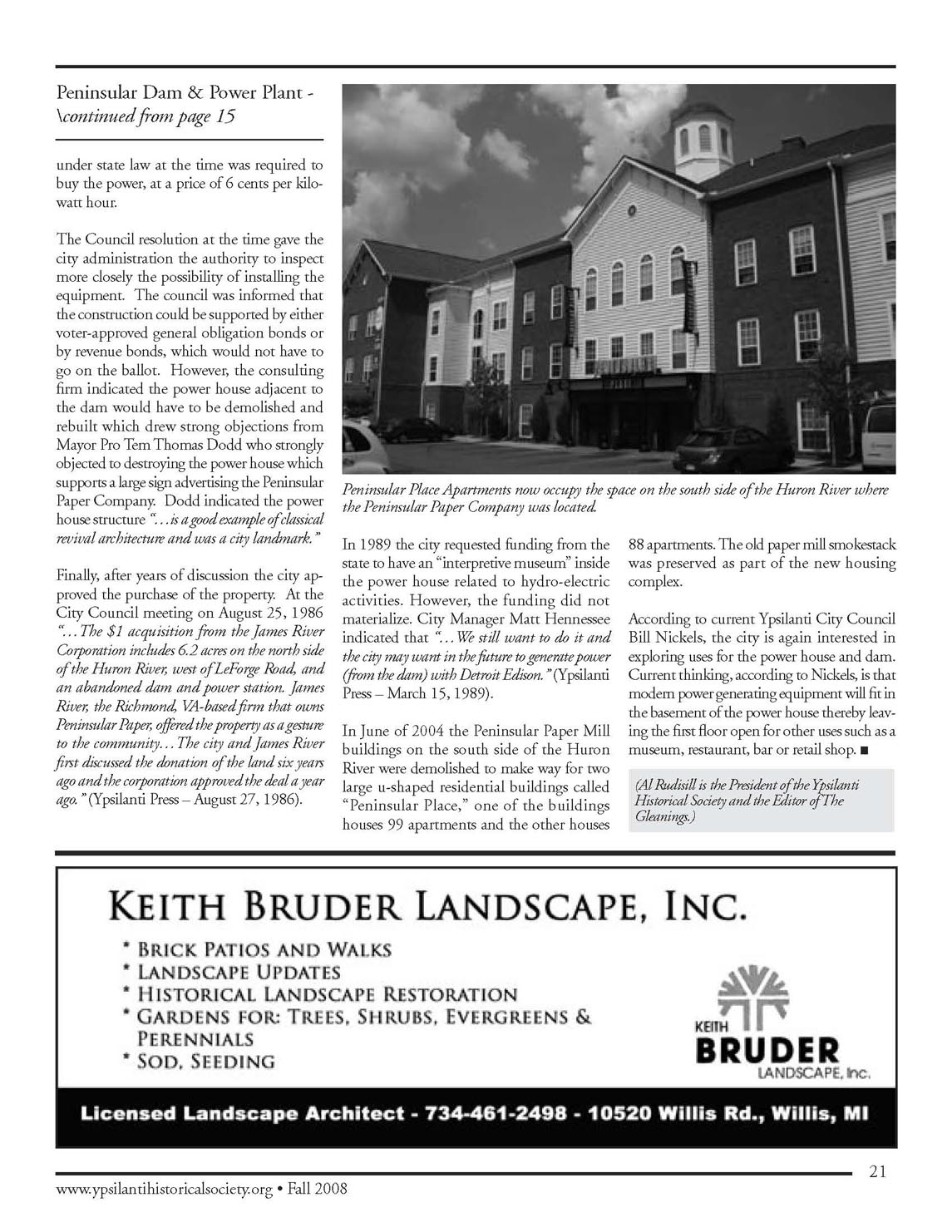 The Peninsular Paper Company was organized on April 3, 1867 with capital stock of $50,000. The original stockholders were Samuel Barnard, Lambert A. Barnes, William H. Myers and Daniel L. Quirk. Lambert Barnes served as the first president until 1870 when Daniel L. Quirk became President. Quirk’s son Daniel joined the firm in 1890 and became President at the turn of the century. The Quirk family then controlled and operated the mill for more than 100 years until it was sold in 1974 to the James River Corporation of Richmond, Virginia.

Construction on the mill began in 1867 and the first paper was produced in 1868. The March 13, 1869 issue of the Ypsilanti Commercial indicated that “…The company called The Peninsular Paper Company have build a dam probably unequaled in the Northwest. The mill is built of brick, main building 40 x 106, three stories high, and an attic, Machine room 30 x 86, Finishing room 28 x 30. In addition wheel room, boiler room and shed. Every part of the building is complete.”

The decision to build the mill at this time was probably made because a contract was obtained from the Chicago Tribune to take the output of the mill in newsprint. At the time newsprint was made from rags and the newsprint contract was for 17 cents per pound. However, after the mill was in operation the Chicago Tribune insisted that the Peninsular Paper Company build another mill far enough away from the first mill to safeguard the newspaper’s supply of paper in case of fire. Therefore, in May of 1876 the capitalization of the company was increased from $50,000 to $100,000 and another one-machine mill was erected on the north side of the Huron River. This second mill was operated for 22 years until 1898 when it was destroyed by fire. The salvaged machinery was then moved to the original building on the south side of the Huron River which was enlarged to accommodate two paper machines and the additional equipment necessary for the increased output.

The original Peninsular Dam was replaced in c1914 but on March 14, 1918 a sudden deluge of rain washed away the dam. The waters of the Huron River rose over 12 feet in 10 minutes causing considerable other damage to bridges along the Huron River chain. Plans for replacing the dam were drawn up by Gardner Williams, one of the most outstanding engineering innovators in the state whose reputation reached far beyond the state and even the country. Williams acted as a designer and consultant to a number of great engineering projects, including a lock on the Great Lakes, steam and diesel powered electric plants, hydro-electric plants in several Midwestern states, and a dam in Siberia that at the time was the longest multiple-arch dam in the world.

The March 8, 1915 issue of the Daily Ypsilanti Press included an article titled “The Story of Ypsilanti’s Successful Fight for Gas Plant.” The article included a picture with the caption “Municipal Water and Electric Light Plant, Ypsilanti, Formerly a Paper Mill with Fine Water Power.” The picture appears to be the north side of the Huron River prior to the construction of the power plant that currently exists on the site.

The Eastern Michigan Edison Company (a subsidiary of Detroit Edison) called on Williams to design a series of nine dams on a 50 mile stretch of the Huron River between Dexter and Belleville. The first of the dams, Barton Dam, was finished in 1912, followed by Argo Dam in 1913, Geddes Dam in 1919, Superior Dam and the Papermill Dam in 1920 and French Landing Dam in Belleville in 1925. Plans on the drawing board for Dexter and Delhi were cancelled because of the depression as were several lakeside villa communities planned as part of the dam developments. Only Barton Hills was completed.

According to a 2001 Dam Inspection Report by Ayres, Lewis, Norris & May, Inc. “…The abandoned powerhouse was constructed in 1918, and was outfitted at that time with two vertical Francis turbines. Power production from the facility was abandoned in 1970. At the time of decommissioning activities, all generators and related electrical equipment were removed. Other decommissioning activities included closure of the head gates, and filling of the vertical turbine pits with earth to prevent passage of water through the structure. That same report indicated problems with dam safety. “…In 1979 the Dam was rated unsafe in a report by the National Dam Safety Program (NDSP) by Ayres, Lewis, Norris & May, Inc. due to severe deterioration and spalling of the left concrete abutment pier between the fixed crest spillway and the radial gate spillway (since replaced with stop-logs). This abutment pier was repaired after the report was issued, and the unsafe rating of the Dam was noted as “removed” in the 1992 MDEQ Dam Inspection Report.”

The January 25, 1983 issue of the Ypsilanti Press indicated the Ypsilanti City Council was interested in looking into the feasibility of getting into the hydro-power business through the use of the Peninsular Dam. The Council voted unanimously to support in principle acquiring the dam and nine acres of adjacent park land that the paper company had proposed donating to the city. The consulting firm of Ayres, Lewis, Norris & May, Inc. advised the Council that installing a turbine generator and power station could feed electricity into Detroit Edison’s lines would cost approximately $570,000. However, the firm further advised that the city could turn a profit of $400,000 in 12 years time by selling the electricity to Detroit Edison, which under state law at the time was required to buy the power, at a price of 6 cents per kilowatt hour.

The Council resolution at the time gave the city administration the authority to inspect more closely the possibility of installing the equipment. The council was informed that the construction could be supported by either voter-approved general obligation bonds or by revenue bonds, which would not have to go on the ballot. However, the consulting firm indicated the power house adjacent to the dam would have to be demolished and rebuilt which drew strong objections from Mayor Pro Tem Thomas Dodd who strongly objected to destroying the power house which supports a large sign advertising the Peninsular Paper Company. Dodd indicated the power house structure “…is a good example of classical revival architecture and was a city landmark.”

Finally, after years of discussion the city approved the purchase of the property. At the City Council meeting on August 25, 1986 “…The $1 acquisition from the James River Corporation includes 6.2 acres on the north side of the Huron River, west of LeForge Road, and an abandoned dam and power station. James River, the Richmond, VA-based firm that owns Peninsular Paper, offered the property as a gesture to the community…The city and James River first discussed the donation of the land six years ago and the corporation approved the deal a year ago.” (Ypsilanti Press – August 27, 1986).

In 1989 the city requested funding from the state to have an “interpretive museum” inside the power house related to hydro-electric activities. However, the funding did not materialize. City Manager Matt Hennessee indicated that “…We still want to do it and the city may want in the future to generate power (from the dam) with Detroit Edison.” (Ypsilanti Press – March 15, 1989).

In June of 2004 the Peninsular Paper Mill buildings on the south side of the Huron River were demolished to make way for two large u-shaped residential buildings called “Peninsular Place,” one of the buildings houses 99 apartments and the other houses 88 apartments. The old paper mill smokestack was preserved as part of the new housing complex.

According to current Ypsilanti City Council Bill Nickels, the city is again interested in exploring uses for the power house and dam. Current thinking, according to Nickels, is that modern power generating equipment will fit in the basement of the power house thereby leaving the first floor open for other uses such as a museum, restaurant, bar or retail shop.

(Al Rudisill is the President of the Ypsilanti Historical Society and the Editor of The Gleanings.)