“The Real McCoy” Origin Owned by Ypsilanti (and others) 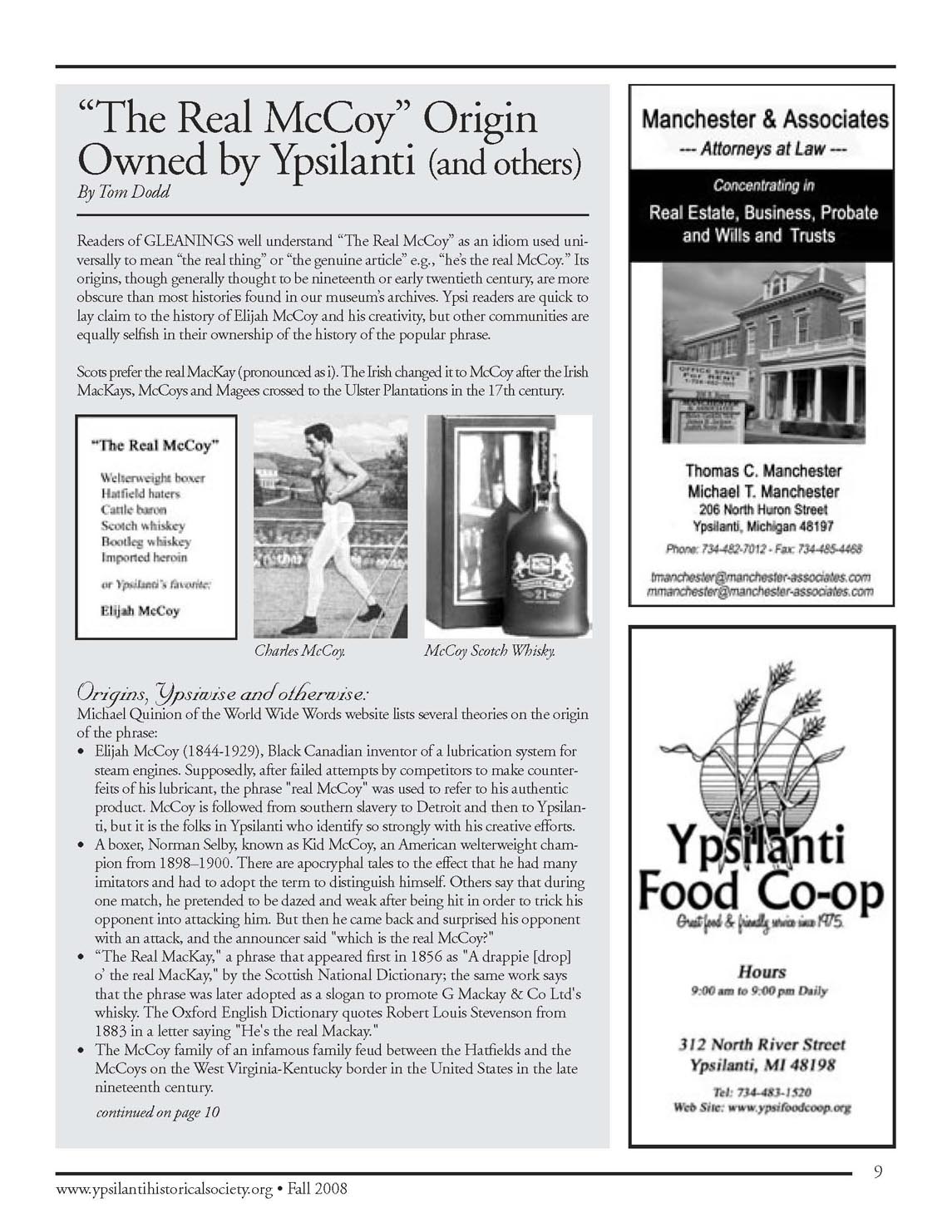 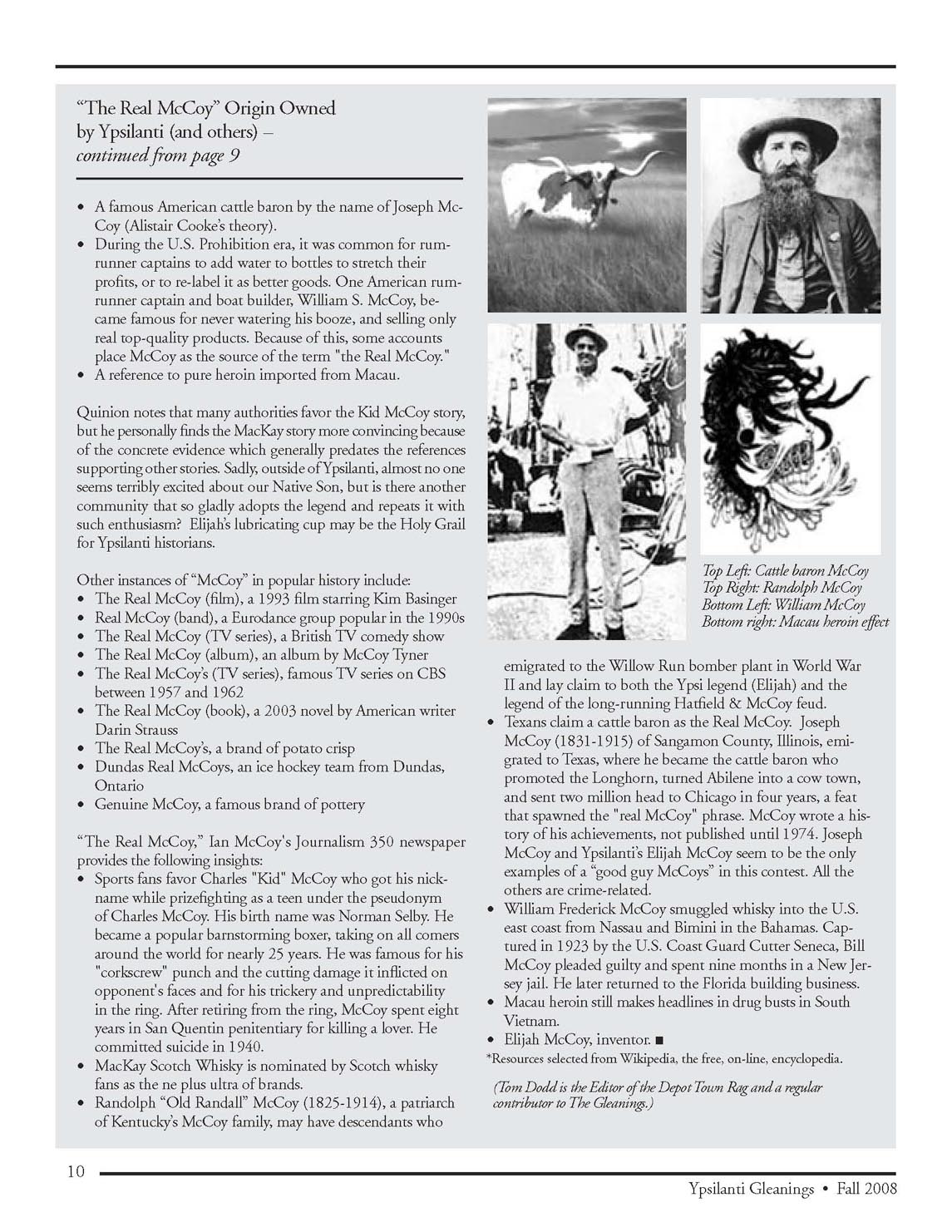 Readers of GLEANINGS well understand “The Real McCoy” as an idiom used universally to mean "the real thing" or "the genuine article" e.g., "he's the real McCoy.” Its origins, though generally thought to be nineteenth or early twentieth century, are more obscure than most histories found in our museum’s archives. Ypsi readers are quick to lay claim to the history of Elijah McCoy and his creativity, but other communities are equally selfish in their ownership of the history of the popular phrase.

Scots refer the real MacKay (pronounced as i). The Irish changed it to McCoy after the Irish MacKays, McCoys and Magees crossed to the Ulster Plantations in the 17th century.

Michael Quinion of the World Wide Words website lists several theories on the origin of the phrase:

• Elijah McCoy (1844-1929), Black Canadian inventor of a lubrication system for steam engines. Supposedly, after failed attempts by competitors to make counterfeits of his lubricant, the phrase "real McCoy" was used to refer to his authentic product. McCoy is followed from southern slavery to Detroit and then to Ypsilanti, but it is the folks in Ypsilanti who identify so strongly with his creative efforts.
• A boxer, Norman Selby, known as Kid McCoy, an American welterweight champion from 1898–1900. There are apocryphal tales to the effect that he had many imitators and had to adopt the term to distinguish himself. Others say that during one match, he pretended to be dazed and weak after being hit in order to trick his opponent into attacking him. But then he came back and surprised his opponent with an attack, and the announcer said "which is the real McCoy?"
• “The Real MacKay," a phrase that appeared first in 1856 as "A drappie [drop] o’ the real MacKay," by the Scottish National Dictionary; the same work says that the phrase was later adopted as a slogan to promote G Mackay & Co Ltd's whisky. The Oxford English Dictionary quotes Robert Louis Stevenson from 1883 in a letter saying "He's the real Mackay."
• The McCoy family of an infamous family feud between the Hatfields and the McCoys on the West Virginia-Kentucky border in the United States in the late nineteenth century.
• A famous American cattle baron by the name of Joseph McCoy (Alistair Cooke’s theory).
• During the U.S. Prohibition era, it was common for rum-runner captains to add water to bottles to stretch their profits, or to re-label it as better goods. One American rum-runner captain and boat builder, William S. McCoy, became famous for never watering his booze, and selling only real top-quality products. Because of this, some accounts place McCoy as the source of the term "the Real McCoy."
• A reference to pure heroin imported from Macau.

Quinion notes that many authorities favor the Kid McCoy story, but he personally finds the MacKay story more convincing because of the concrete evidence which generally predates the references supporting other stories. Sadly, outside of Ypsilanti, almost no one seems terribly excited about our Native Son, but is there another community that so gladly adopts the legend and repeats it with such enthusiasm? Elijah’s lubricating cup may be the Holy Grail for Ypsilanti historians.

• Sports fans favor Charles "Kid" McCoy who got his nickname while prizefighting as a teen under the pseudonym of Charles McCoy. His birth name was Norman Selby. He became a popular barnstorming boxer, taking on all comers around the world for nearly 25 years. He was famous for his "corkscrew" punch and the cutting damage it inflicted on opponent's faces and for his trickery and unpredictability in the ring. After retiring from the ring, McCoy spent eight years in San Quentin penitentiary for killing a lover. He committed suicide in 1940.
• MacKay Scotch Whisky is nominated by Scotch whisky fans as the ne plus ultra of brands.
• Randolph “Old Randall” McCoy (1825-1914), a patriarch of Kentucky’s McCoy family, may have descendants who emigrated to the Willow Run bomber plant in World War II and lay claim to both the Ypsi legend (Elijah) and the legend of the long-running Hatfield & McCoy feud.
• Texans claim a cattle baron as the Real McCoy. Joseph McCoy (1831-1915) of Sangamon County, Illinois, emigrated to Texas, where he became the cattle baron who promoted the Longhorn, turned Abilene into a cow town, and sent two million head to Chicago in four years, a feat that spawned the "real McCoy" phrase. McCoy wrote a history of his achievements, not published until 1974. Joseph McCoy and Ypsilanti’s Elijah McCoy seem to be the only examples of a “good guy McCoys” in this contest. All the others are crime-related.
• William Frederick McCoy smuggled whisky into the U.S. east coast from Nassau and Bimini in the Bahamas. Captured in 1923 by the U.S. Coast Guard Cutter Seneca, Bill McCoy pleaded guilty and spent nine months in a New Jersey jail. He later returned to the Florida building business.
• Macau heroin still makes headlines in drug busts in South Vietnam.
• Elijah McCoy, inventor.

(Tom Dodd is the Editor of the Depot Town Rag and a regular contributor to The Gleanings.)