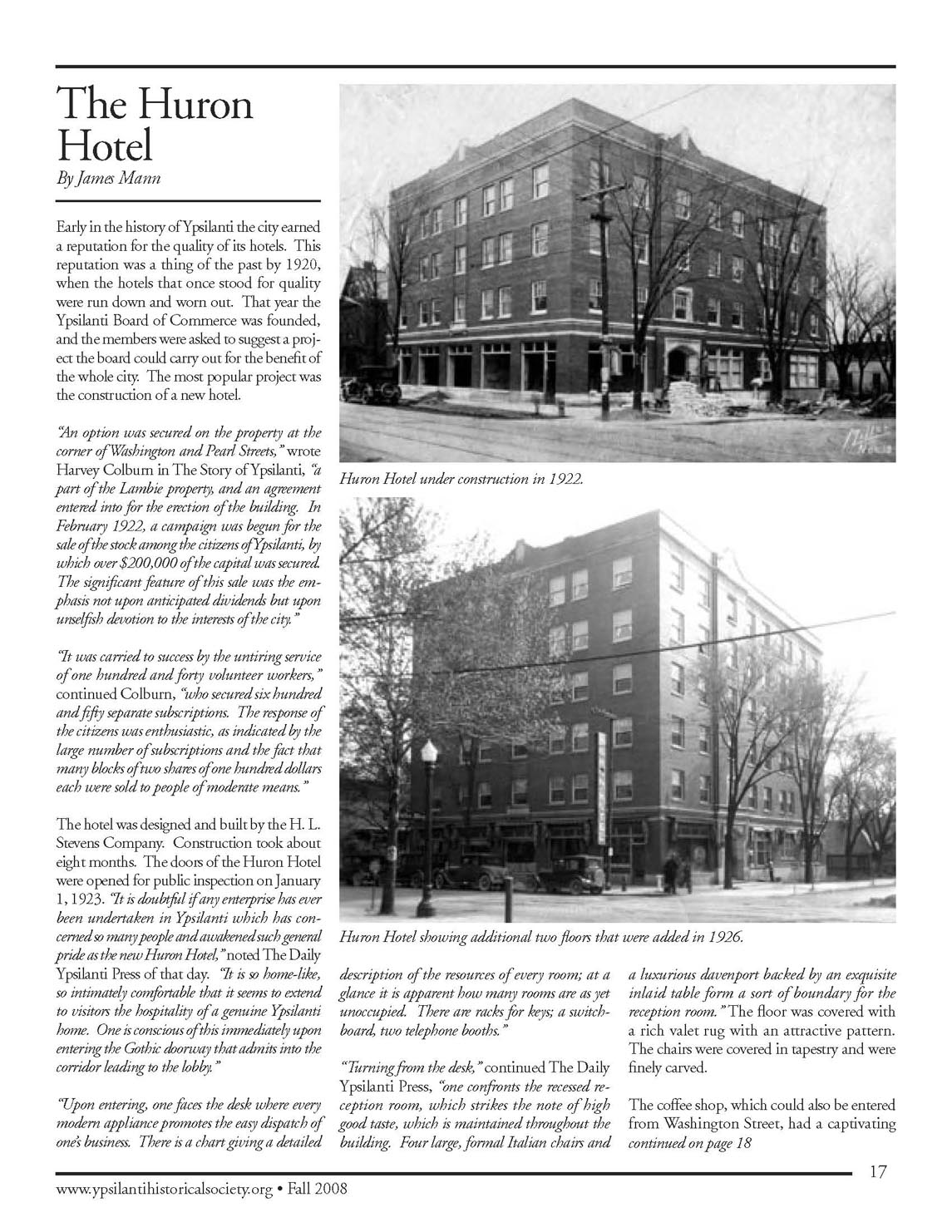 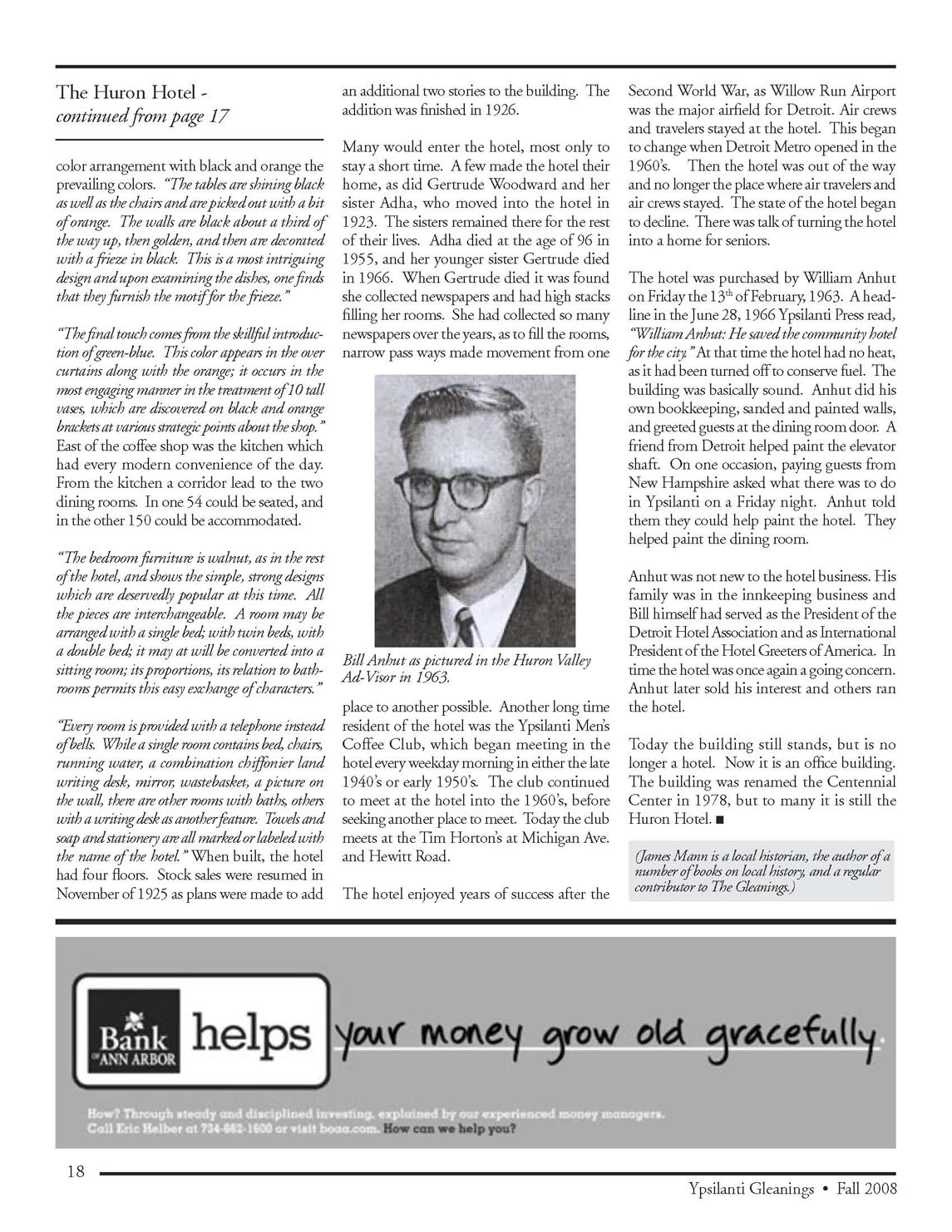 Early in the history of Ypsilanti the city earned a reputation for the quality of its hotels. This reputation was a thing of the past by 1920, when the hotels that once stood for quality were run down and worn out. That year the Ypsilanti Board of Commerce was founded, and the members were asked to suggest a project the board could carry out for the benefit of the whole city. The most popular project was the construction of a new hotel.

“An option was secured on the property at the corner of Washington and Pearl Streets,” wrote Harvey Colburn in The Story of Ypsilanti, “a part of the Lambie property, and an agreement entered into for the erection of the building. In February 1922, a campaign was begun for the sale of the stock among the citizens of Ypsilanti, by which over $200,000 of the capital was secured. The significant feature of this sale was the emphasis not upon anticipated dividends but upon unselfish devotion to the interests of the city.”

“It was carried to success by the untiring service of one hundred and forty volunteer workers,” continued Colburn, “who secured six hundred and fifty separate subscriptions. The response of the citizens was enthusiastic, as indicated by the large number of subscriptions and the fact that many blocks of two shares of one hundred dollars each were sold to people of moderate means.”

The hotel was designed and built by the H. L. Stevens Company. Construction took about eight months. The doors of the Huron Hotel were opened for public inspection on January 1, 1923. “It is doubtful if any enterprise has ever been undertaken in Ypsilanti which has concerned so many people and awakened such general pride as the new Huron Hotel,” noted The Daily Ypsilanti Press of that day. “It is so home-like, so intimately comfortable that it seems to extend to visitors the hospitality of a genuine Ypsilanti home. One is conscious of this immediately upon entering the Gothic doorway that admits into the corridor leading to the lobby.”

“Upon entering, one faces the desk where every modern appliance promotes the easy dispatch of one’s business. There is a chart giving a detailed description of the resources of every room; at a glance it is apparent how many rooms are as yet unoccupied. There are racks for keys; a switchboard, two telephone booths.”

“Turning from the desk,” continued The Daily Ypsilanti Press, “one confronts the recessed reception room, which strikes the note of high good taste, which is maintained throughout the building. Four large, formal Italian chairs and a luxurious davenport backed by an exquisite inlaid table form a sort of boundary for the reception room.” The floor was covered with a rich valet rug with an attractive pattern. The chairs were covered in tapestry and were finely carved.

The coffee shop, which could also be entered from Washington Street, had a captivating color arrangement with black and orange the prevailing colors. “The tables are shining black as well as the chairs and are picked out with a bit of orange. The walls are black about a third of the way up, then golden, and then are decorated with a frieze in black. This is a most intriguing design and upon examining the dishes, one finds that they furnish the motif for the frieze.”

“The final touch comes from the skillful introduction of green-blue. This color appears in the over curtains along with the orange; it occurs in the most engaging manner in the treatment of 10 tall vases, which are discovered on black and orange brackets at various strategic points about the shop.” East of the coffee shop was the kitchen which had every modern convenience of the day. From the kitchen a corridor lead to the two dining rooms. In one 54 could be seated, and in the other 150 could be accommodated.

“The bedroom furniture is walnut, as in the rest of the hotel, and shows the simple, strong designs which are deservedly popular at this time. All the pieces are interchangeable. A room may be arranged with a single bed; with twin beds, with a double bed; it may at will be converted into a sitting room; its proportions, its relation to bathrooms permits this easy exchange of characters.”

“Every room is provided with a telephone instead of bells. While a single room contains bed, chairs, running water, a combination chiffonier land writing desk, mirror, wastebasket, a picture on the wall, there are other rooms with baths, others with a writing desk as another feature. Towels and soap and stationery are all marked or labeled with the name of the hotel.” When built, the hotel had four floors. Stock sales were resumed in November of 1925 as plans were made to add an additional two stories to the building. The addition was finished in 1926.

Many would enter the hotel, most only to stay a short time. A few made the hotel their home, as did Gertrude Woodward and her sister Adha, who moved into the hotel in 1923. The sisters remained there for the rest of their lives. Adha died at the age of 96 in 1955, and her younger sister Gertrude died in 1966. When Gertrude died it was found she collected newspapers and had high stacks filling her rooms. She had collected so many newspapers over the years, as to fill the rooms, narrow pass ways made movement from one place to another possible. Another long time resident of the hotel was the Ypsilanti Men’s Coffee Club, which began meeting in the hotel every weekday morning in either the late 1940’s or early 1950’s. The club continued to meet at the hotel into the 1960’s, before seeking another place to meet. Today the club meets at the Tim Horton’s at Michigan Ave. and Hewitt Road.

The hotel enjoyed years of success after the Second World War, as Willow Run Airport was the major airfield for Detroit. Air crews and travelers stayed at the hotel. This began to change when Detroit Metro opened in the 1960’s. Then the hotel was out of the way and no longer the place where air travelers and air crews stayed. The state of the hotel began to decline. There was talk of turning the hotel into a home for seniors.

The hotel was purchased by William Anhut on Friday the 13th of February, 1963. A headline in the June 28, 1966 Ypsilanti Press read, “William Anhut: He saved the community hotel for the city.” At that time the hotel had no heat, as it had been turned off to conserve fuel. The building was basically sound. Anhut did his own bookkeeping, sanded and painted walls, and greeted guests at the dining room door. A friend from Detroit helped paint the elevator shaft. On one occasion, paying guests from New Hampshire asked what there was to do in Ypsilanti on a Friday night. Anhut told them they could help paint the hotel. They helped paint the dining room.

Anhut was not new to the hotel business. His family was in the innkeeping business and Bill himself had served as the President of the Detroit Hotel Association and as International President of the Hotel Greeters of America. In time the hotel was once again a going concern. Anhut later sold his interest and others ran the hotel.

Today the building still stands, but is no longer a hotel. Now it is an office building. The building was renamed the Centennial Center in 1978, but to many it is still the Huron Hotel.

(James Mann is a local historian, the author of a number of books on local history, and a regular contributor to The Gleanings.)

Photo 1: Huron Hotel under construction in 1922.
Photo 2: Huron Hotel showing additional two floors that were added in 1926.
Photo 3: Bill Anhut as pictured in the Huron Valley Ad-Visor in 1963.