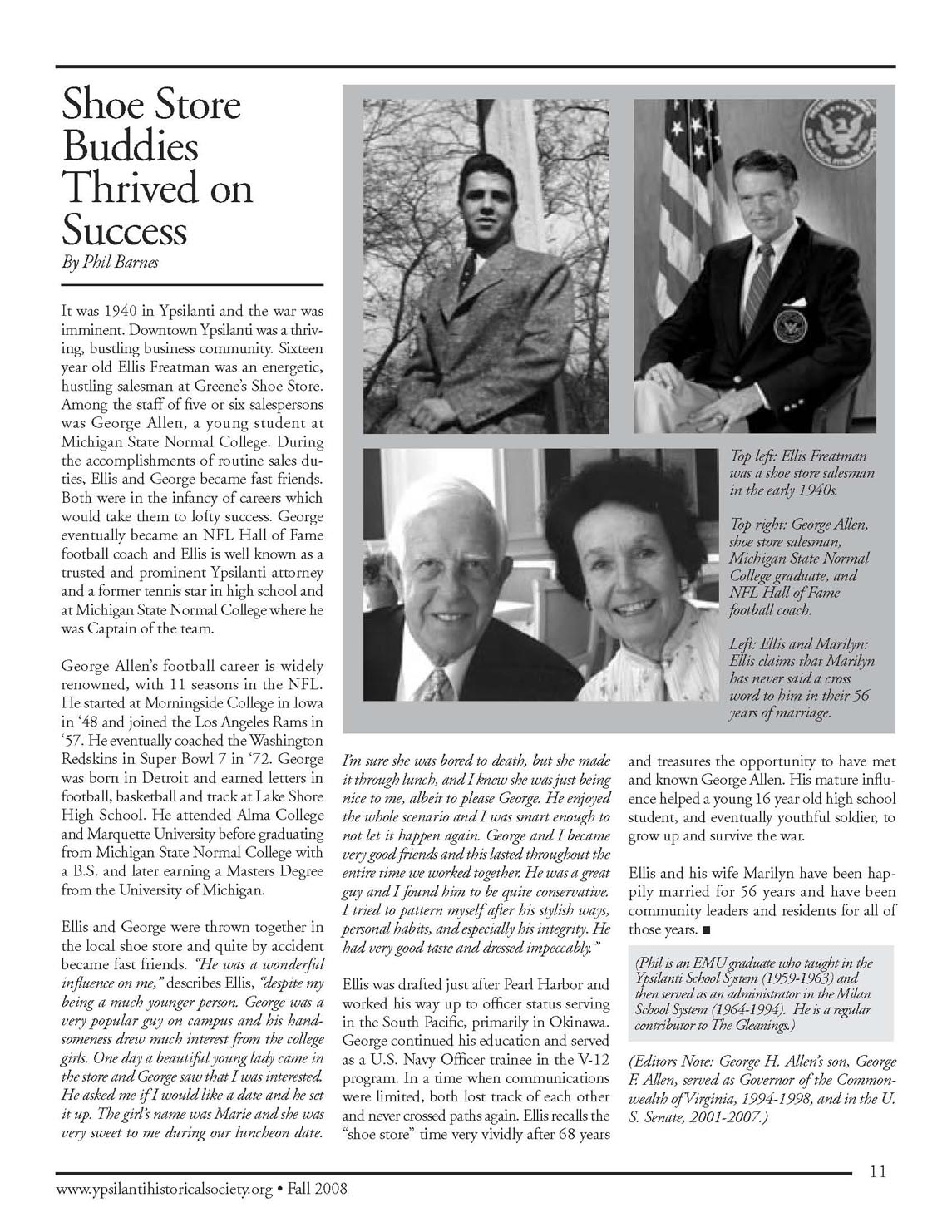 It was 1940 in Ypsilanti and the war was imminent. Downtown Ypsilanti was a thriving, bustling business community. Sixteen year old Ellis Freatman was an energetic, hustling salesman at Greene's Shoe Store. Among the staff of five or six salespersons was George Allen, a young student at Michigan State Normal College. During the accomplishments of routine sales duties, Ellis and George became fast friends. Both were in the infancy of careers which would take them to lofty success. George eventually became an NFL Hall of Fame football coach and Ellis is well known as a trusted and prominent Ypsilanti attorney and a former tennis star in high school and at Michigan State Normal College where he was Captain of the team.

George Allen's football career is widely renowned, with 11 seasons in the NFL. He started at Morningside College in Iowa in '48 and joined the Los Angeles Rams in '57. He eventually coached the Washington Redskins in Super Bowl 7 in '72. George was born in Detroit and earned letters in football, basketball and track at Lake Shore High School. He attended Alma College and Marquette University before graduating from Michigan State Normal College with a B.S. and later earning a Masters Degree from the University of Michigan.

Ellis and George were thrown together in the local shoe store and quite by accident became fast friends. "He was a wonderful influence on me," describes Ellis, "despite my being a much younger person. George was a very popular guy on campus and his handsomeness drew much interest from the college girls. One day a beautiful young lady came in the store and George saw that I was interested. He asked me if I would like a date and he set it up. The girl's name was Marie and she was very sweet to me during our luncheon date. I'm sure she was bored to death, but she made it through lunch, and I knew she was just being nice to me, albeit to please George. He enjoyed the whole scenario and I was smart enough to not let it happen again. George and I became very good friends and this lasted throughout the entire time we worked together. He was a great guy and I found him to be quite conservative. I tried to pattern myself after his stylish ways, personal habits, and especially his integrity. He had very good taste and dressed impeccably."

Ellis was drafted just after Pearl Harbor and worked his way up to officer status serving in the South Pacific, primarily in Okinawa. George continued his education and served as a U.S. Navy Officer trainee in the V-12 program. In a time when communications were limited, both lost track of each other and never crossed paths again. Ellis recalls the "shoe store" time very vividly after 68 years and treasures the opportunity to have met and known George Allen. His mature influence helped a young 16 year old high school student, and eventually youthful soldier, to grow up and survive the war.

Ellis and his wife Marilyn have been happily married for 56 years and have been community leaders and residents for all of those years.

(Phil is an EMU graduate who taught in the Ypsilanti School System (1959-1963) and then served as an administrator in the Milan School System (1964-1994). He is a regular contributor to The Gleanings.)