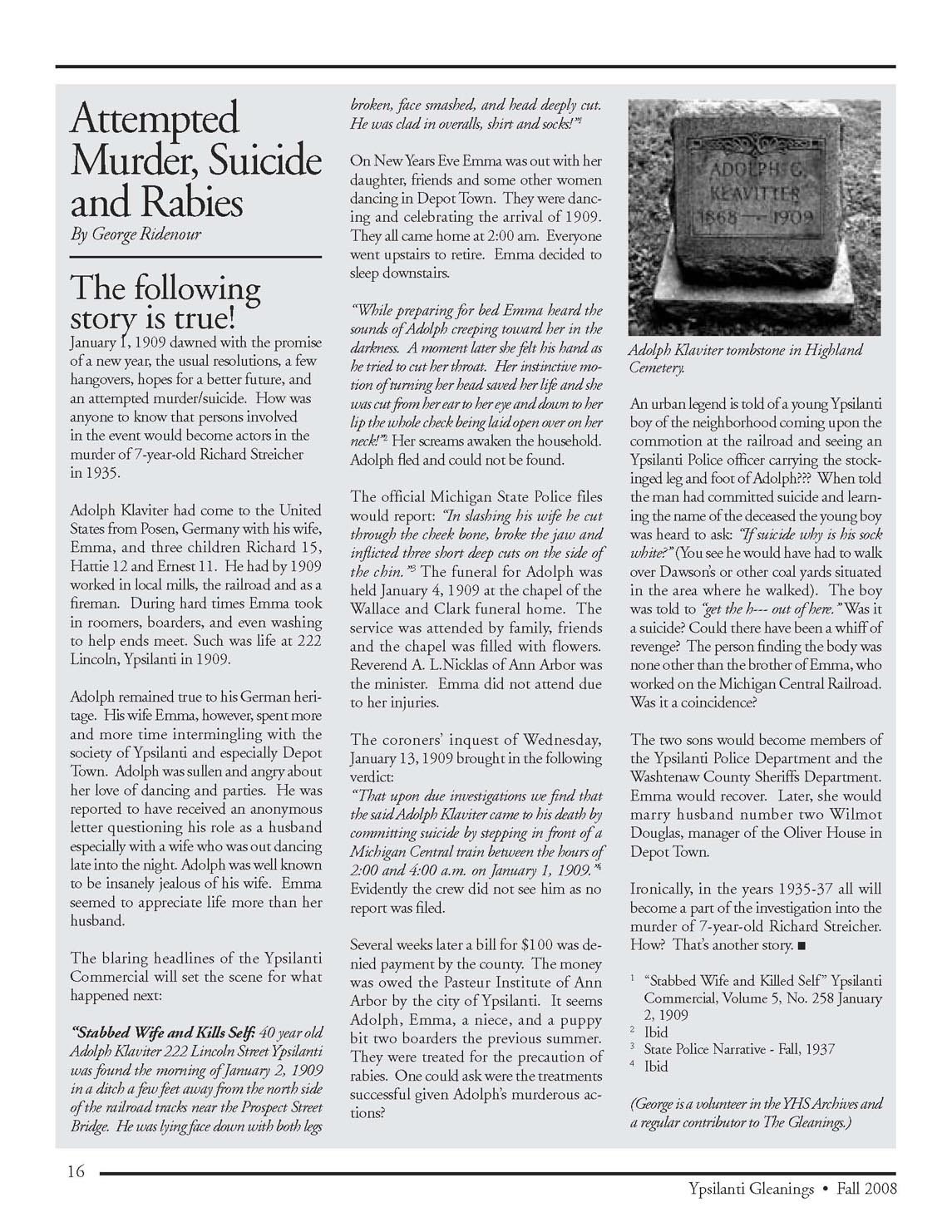 The following story is true! January 1, 1909 dawned with the promise of a new year, the usual resolutions, a few hangovers, hopes for a better future, and an attempted murder/suicide. How was anyone to know that persons involved in the event would become actors in the murder of 7-year-old Richard Streicher in 1935.

Adolph Klaviter had come to the United States from Posen, Germany with his wife, Emma, and three children Richard 15, Hattie 12 and Ernest 11. He had by 1909 worked in local mills, the railroad and as a fireman. During hard times Emma took in roomers, boarders, and even washing to help ends meet. Such was life at 222 Lincoln, Ypsilanti in 1909.

Adolph remained true to his German heritage. His wife Emma, however, spent more and more time intermingling with the society of Ypsilanti and especially Depot Town. Adolph was sullen and angry about her love of dancing and parties. He was reported to have received an anonymous letter questioning his role as a husband especially with a wife who was out dancing late into the night. Adolph was well known to be insanely jealous of his wife. Emma seemed to appreciate life more than her husband.

The blaring headlines of the Ypsilanti Commercial will set the scene for what happened next:

“Stabbed Wife and Kills Self: 40 year old Adolph Klaviter 222 Lincoln Street Ypsilanti was found the morning of January 2, 1909 in a ditch a few feet away from the north side of the railroad tracks near the Prospect Street Bridge. He was lying face down with both legs broken, face smashed, and head deeply cut. He was clad in overalls, shirt and socks!”1

On New Years Eve Emma was out with her daughter, friends and some other women dancing in Depot Town. They were dancing and celebrating the arrival of 1909. They all came home at 2:00 am. Everyone went upstairs to retire. Emma decided to sleep downstairs.

“While preparing for bed Emma heard the sounds of Adolph creeping toward her in the darkness. A moment later she felt his hand as he tried to cut her throat. Her instinctive motion of turning her head saved her life and she was cut from her ear to her eye and down to her lip the whole check being laid open over on her neck!”2 Her screams awaken the household. Adolph fled and could not be found.

The official Michigan State Police files would report: “In slashing his wife he cut through the cheek bone, broke the jaw and inflicted three short deep cuts on the side of the chin.”3 The funeral for Adolph was held January 4, 1909 at the chapel of the Wallace and Clark funeral home. The service was attended by family, friends and the chapel was filled with flowers. Reverend A. L.Nicklas of Ann Arbor was the minister. Emma did not attend due to her injuries.

The coroners’ inquest of Wednesday, January 13, 1909 brought in the following verdict:
“That upon due investigations we find that the said Adolph Klaviter came to his death by committing suicide by stepping in front of a Michigan Central train between the hours of 2:00 and 4:00 a.m. on January 1, 1909.”4 Evidently the crew did not see him as no report was filed.

Several weeks later a bill for $100 was denied payment by the county. The money was owed the Pasteur Institute of Ann Arbor by the city of Ypsilanti. It seems Adolph, Emma, a niece, and a puppy bit two boarders the previous summer. They were treated for the precaution of rabies. One could ask were the treatments successful given Adolph’s murderous actions?

An urban legend is told of a young Ypsilanti boy of the neighborhood coming upon the commotion at the railroad and seeing an Ypsilanti Police officer carrying the stockinged leg and foot of Adolph??? When told the man had committed suicide and learning the name of the deceased the young boy was heard to ask: “If suicide why is his sock white?” (You see he would have had to walk over Dawson’s or other coal yards situated in the area where he walked). The boy was told to “get the h--- out of here.” Was it a suicide? Could there have been a whiff of revenge? The person finding the body was none other than the brother of Emma, who worked on the Michigan Central Railroad. Was it a coincidence?

The two sons would become members of the Ypsilanti Police Department and the Washtenaw County Sheriffs Department. Emma would recover. Later, she would marry husband number two Wilmot Douglas, manager of the Oliver House in Depot Town.

Ironically, in the years 1935-37 all will become a part of the investigation into the murder of 7-year-old Richard Streicher. How? That’s another story.

(George is a volunteer in the YHS Archives and a regular contributor to The Gleanings.)