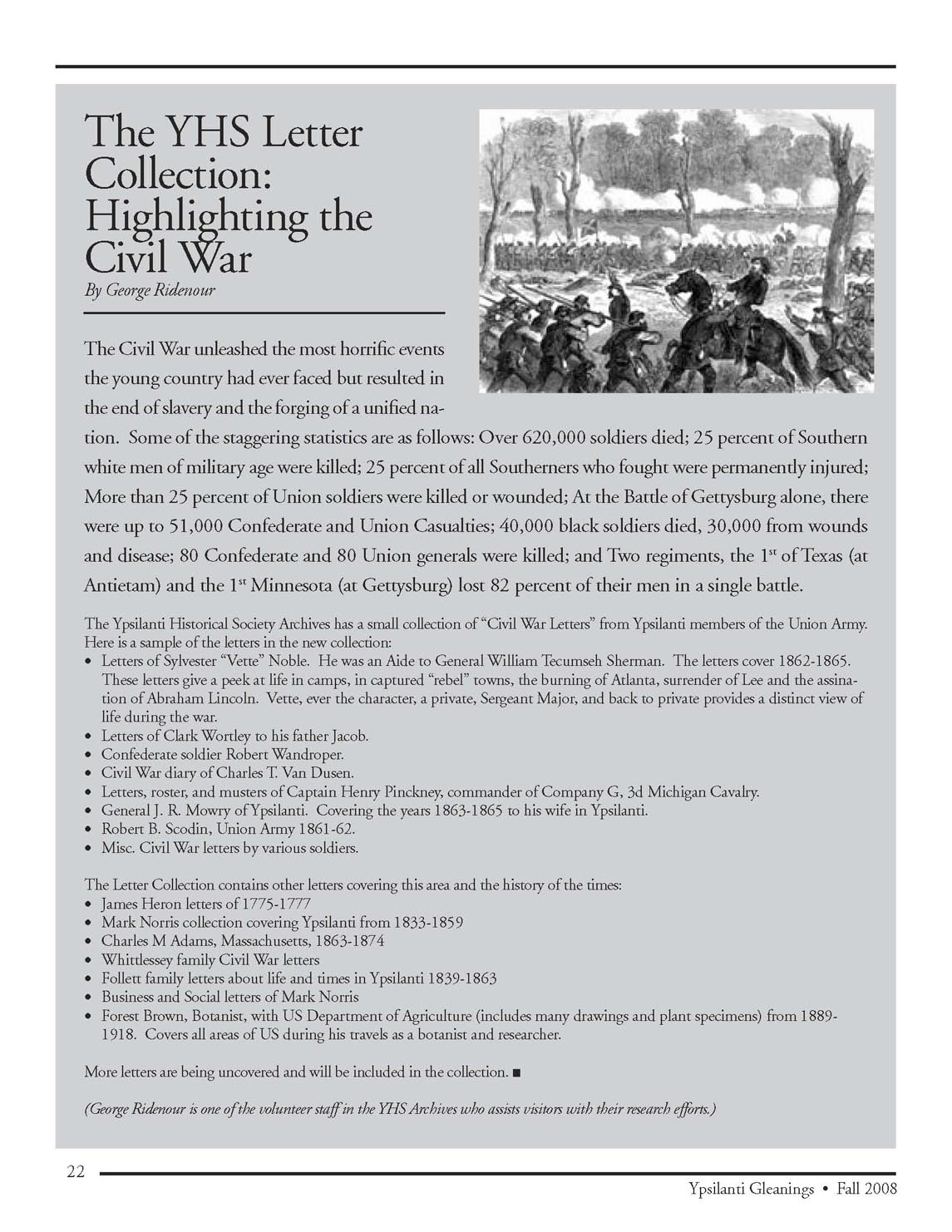 The Civil War unleashed the more horrific events the young country had ever faced but resulted in the end of slavery and the forging of a unified nation. Some of the staggering statistics are as follows: Over 620,000 soldiers died; 25 percent of Southern white men of military age were killed; 25 percent of all Southerners who fought were permanently injured; More than 25 percent of Union soldiers were killed or wounded; At the Battle of Gettysburg alone, there were up to 51,000 Confederate and Union Casualties; 40,000 black soldiers died, 30,000 from wounds and disease; 80 Confederate and 80 Union generals were killed; and Two regiments, the 1st of Texas (at Antietam) and the 1st Minnesota (at Gettysburg) lost 82 percent of their men in a single battle.

The Ypsilanti Historical Society Archives has a small collection of “Civil War Letters” from Ypsilanti members of the Union Army. Here is a sample of the letters in the new collection:

• Letters of Sylvester “Vette” Noble. He was an Aide to General William Tecumseh Sherman. The letters cover 1862-1865. These letters give a peek at life in camps, in captured “rebel” towns, the burning of Atlanta, surrender of Lee and the assination of Abraham Lincoln. Vette, ever the character, a private, Sergeant Major, and back to private provides a distinct view of life during the war.
• Letters of Clark Wortley to his father Jacob.
• Confederate soldier Robert Wandroper.
• Civil War diary of Charles T. Van Dusen.
• Letters, roster, and musters of Captain Henry Pinckney, commander of Company G, 3d Michigan Cavalry.
• General J. R. Mowry of Ypsilanti. Covering the years 1863-1865 to his wife in Ypsilanti.
• Robert B. Scodin, Union Army 1861-62.
• Misc. Civil War letters by various soldiers.

The Letter Collection contains other letters covering this area and the history of the times:

• James Heron letters of 1775-1777
• Mark Norris collection covering Ypsilanti from 1833-1859
• Charles M Adams, Massachusetts, 1863-1874
• Whittlessey family Civil War letters
• Follett family letters about life and times in Ypsilanti 1839-1863
• Business and Social letters of Mark Norris
• Forest Brown, Botanist, with US Department of Agriculture (includes many drawings and plan specimens) from 1889-1918. Covers all areas of US during his travels as a botanist and researcher.

More letters are being uncovered and will be included in the collection.

(George Ridenour is one of the volunteer staff in the YHS Archives who assists visitors with their research efforts.)