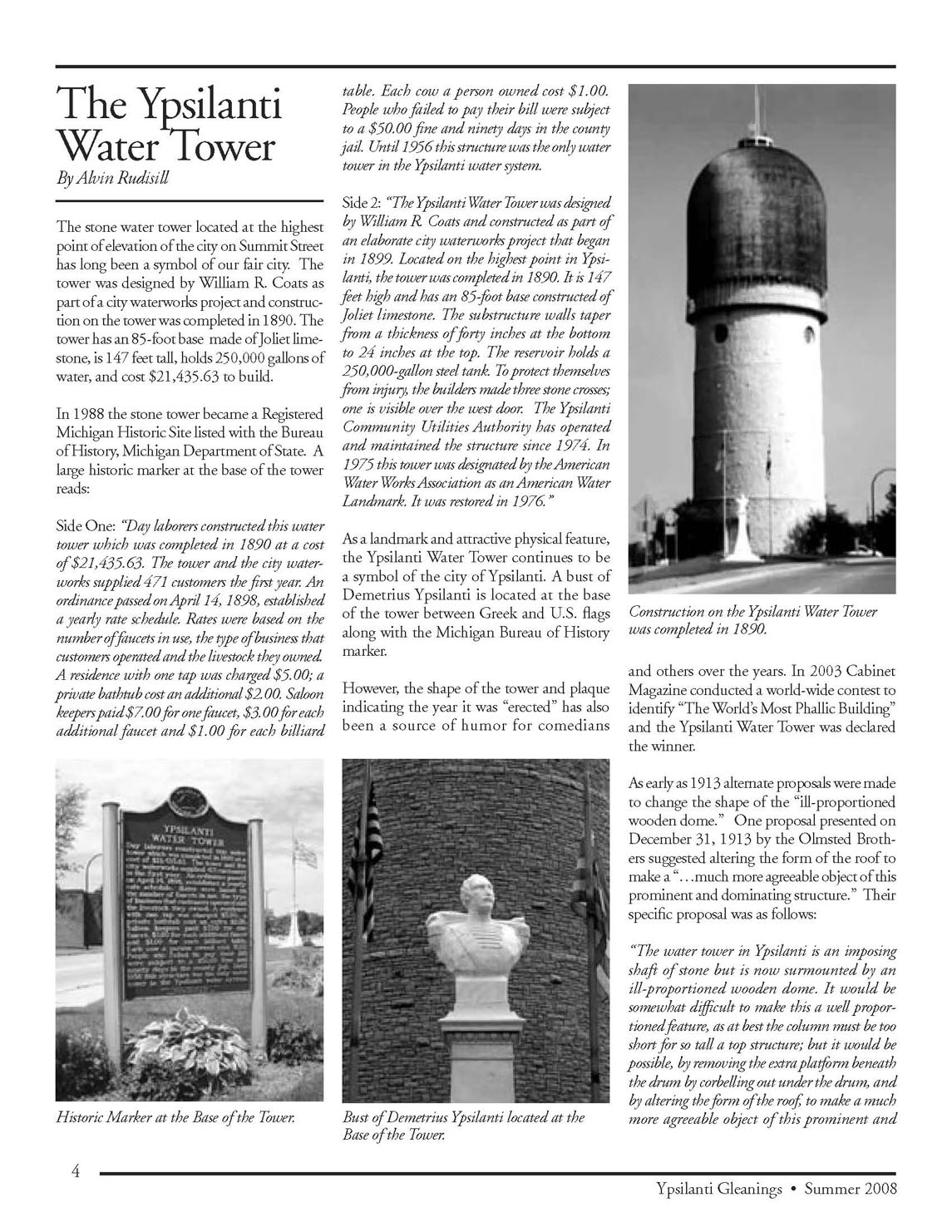 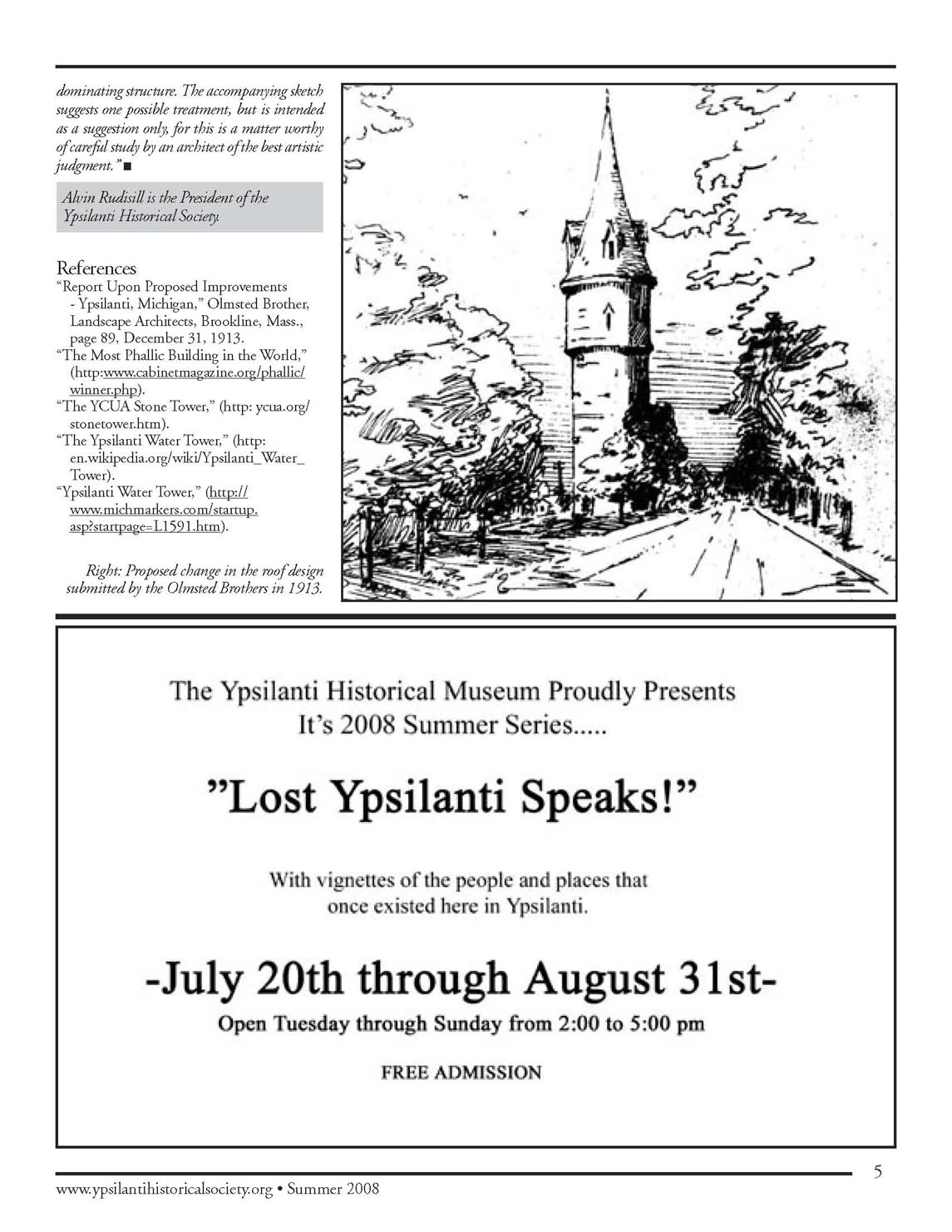 The stone water tower located at the highest point of elevation of the city on Summit Street has long been a symbol of our fair city. The tower was designed by William R. Coats as part of a city waterworks project and construction on the tower was completed in 1890. The tower has an 85-foot base made of Joliet limestone, is 147 feet tall, holds 250,000 gallons of water, and cost $21,435.63 to build.

In 1988 the stone tower became a Registered Michigan Historic Site listed with the Bureau of History, Michigan Department of State. A large historic marker at the base of the tower reads:

Side One: “Day laborers constructed this water tower which was completed in 1890 at a cost of $21,435.63. The tower and the city waterworks supplied 471 customers the first year. An ordinance passed on April 14, 1898, established a yearly rate schedule. Rates were based on the number of faucets in use, the type of business that customers operated and the livestock they owned. A residence with one tap was charged $5.00; a private bathtub cost an additional $2.00. Saloon keepers paid $7.00 for one faucet, $3.00 for each additional faucet and $1.00 for each billiard table. Each cow a person owned cost $1.00. People who failed to pay their bill were subject to a $50.00 fine and ninety days in the county jail. Until 1956 this structure was the only water tower in the Ypsilanti water system.

Side 2: “The Ypsilanti Water Tower was designed by William R. Coats and constructed as part of an elaborate city waterworks project that began in 1899. Located on the highest point in Ypsilanti, the tower was completed in 1890. It is 147 feet high and has an 85-foot base constructed of Joliet limestone. The substructure walls taper from a thickness of forty inches at the bottom to 24 inches at the top. The reservoir holds a 250,000-gallon steel tank. To protect themselves from injury, the builders made three stone crosses; one is visible over the west door. The Ypsilanti Community Utilities Authority has operated and maintained the structure since 1974. In 1975 this tower was designated by the American Water Works Association as an American Water Landmark. It was restored in 1976.”

As a landmark and attractive physical feature, the Ypsilanti Water Tower continues to be a symbol of the city of Ypsilanti. A bust of Demetrius Ypsilanti is located at the base of the tower between Greek and U.S. flags along with the Michigan Bureau of History marker.

However, the shape of the tower and plaque indicating the year it was “erected” has also been a source of humor for comedians and others over the years. In 2003 Cabinet Magazine conducted a world-wide contest to identify “The World’s Most Phallic Building” and the Ypsilanti Water Tower was declared the winner.

As early as 1913 alternate proposals were made to change the shape of the “ill-proportioned wooden dome.” One proposal presented on December 31, 1913 by the Olmsted Brothers suggested altering the form of the roof to make a “…much more agreeable object of this prominent and dominating structure.” Their specific proposal was as follows:

“The water tower in Ypsilanti is an imposing shaft of stone but is now surmounted by an ill-proportioned wooden dome. It would be somewhat difficult to make this a well proportioned feature, as at best the column must be too short for so tall a top structure; but it would be possible, by removing the extra platform beneath the drum by corbelling out under the drum, and by altering the form of the roof, to make a much more agreeable object of this prominent and dominating structure. The accompanying sketch suggests one possible treatment, but is intended as a suggestion only, for this is a matter worthy of careful study by an architect of the best artistic judgment.”

(Alvin Rudisill is the President of the Ypsilanti Historical Society)

“The Most Phallic Building in the World,” (http:www.cabinetmagazine.org/phallic/winner.php).